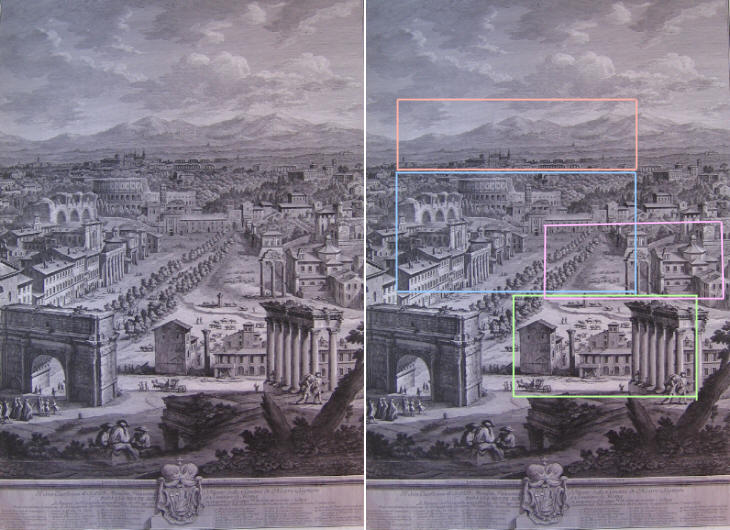 The choice of Campo Vaccino and of the Vatican as the subjects of the two 1765 etchings was consistent with the approach followed by Vasi in his ten books of etchings aimed at showing the magnificence of both ancient (Campo Vaccino) and modern (the Vatican) Rome. The view of Campo Vaccino is very much an enlargement of a section of the Grand View of Rome: this part of the city was hardly visible in that gigantic panorama of Rome. The lower part of the etching contains a long dedication to Abondio Rezzonico, the very powerful nephew of Pope Clement XIII.

Vasi dedicated his Grand View of Rome to Charles III, King of Spain who had been King of the Two Sicilies between 1735 and 1759; the King was Vasi's landlord, as the engraver lived in Palazzo Farnese which the King had inherited from his mother, the last of the Farnese. By dedicating this etching to the Pope's nephew Vasi tried to ingratiate himself with the Pope: it would have been inappropriate to dedicate the view of Campo Vaccino to the Pope himself, having dedicated the larger Grand View of Rome to a king, so Vasi preferred to dedicate the etching to his nephew.
The Rezzonico came from Venice and they protected Giovan Battista Piranesi, an etcher born near Venice and a competitor of Vasi. In the dedication Vasi declared himself the most humble, most devoted and most obliged servant of the Rezzonico, but at the same time he highlighted his own honorific titles.

Vasi placed between the etching and the dedication a short epigram of unknown author used by Sebastiano Serlio in the Frontispiece of Book V of the Architettura, published in 1547.

In his 1753 book on the squares of Rome Vasi had shown Campo Vaccino in two plates: No 31 (a view towards the Campidoglio) and No 32 (a view towards Arco di Tito). In addition plates No 54 (S. Maria Liberatrice) and No 197 (Orti Farnesiani) showed other parts of Campo Vaccino. In this large etching Vasi tried to show all the monuments in just one view by placing the observation point at the top of the Campidoglio and from this point he drew the monuments close to it: Arco di Settimio Severo, Tempio di Saturno or della Concordia and the almost entirely buried three remaining columns of Tempio di Vespasiano. For the other monuments of Campo Vaccino Vasi assumed a higher observation point, most likely the top of the tower of Palazzo Senatorio; finally for the view of the aqueducts in the Roman Campagna he assumed an even higher point of observation. It is the same approach he used in the Grand View to show locations which otherwise would have been hidden by buildings or hills.

By comparing the etching with today's pictures one can appreciate the size of the excavations which were undertaken in the XIXth century: because the archaeologists wanted to reach the earliest Roman buildings, they excavated until they reached the level of the ground at the time of Emperor Augustus. This level was lower than that in the late Ist century or in the IIIrd century when Tempio di Vespasiano and Arco di Settimio Severo were built. This explains why we see the foundations of the temples or why there is a short slope leading to the arch.

View of S. Giovanni in Laterano and the Castelli

The Castelli (especially Frascati: this detail of the etching shows also (to the left) Monte Porzio and Monte Compatri) and (to the right) Grottaferrata), as well as the ruins of the aqueducts were very popular among the foreigners who visited Rome in the XVIIIth century. Vasi, who dedicated his works of art to kings and popes, but sold them to foreigners, knew that by showing these remote locations he was increasing the marketing value of his etchings.
The two lines of aqueducts shown in the view look near one another, but in reality they are quite apart. The first line shows the aqueduct built by Emperor Nero between Porta Maggiore and the Palatine. The second one shows an aqueduct built by Emperor Claudius, the ruins of which are located several miles outside the city gates.

View of S. Giovanni in Laterano (far left) and the Castelli from the rear terrace of Monumento a Vittorio Emanuele II. Note: The dome in the foreground belongs to SS. Luca e Martina

Today there are two terraces at the foot of Palazzo Senatorio which offer fine views of Foro Romano (nobody calls it Campo Vaccino any longer). However from these vantage points it is not possible to see S. Giovanni in Laterano and the Castelli because these locations are blocked out respectively by Colosseo and by the Palatine. The rear terrace of Monumento a Vittorio Emanuele II is located at a slightly higher level and from there one can appreciate what sort of magnifying glass Vasi used to show in his etching all the details of S. Giovanni in Laterano and to single out the churches and houses of Frascati.

Campo Vaccino was crossed by a road which led to Arco di Tito: the cattle market took place between the road and the Palatine and the etching shows some cows near a watering trough: the use of the area for the market ended with the French occupation of Rome (early XIXth century). Near the watering trough Vasi sketched a marana, a small seasonal stream caused by the lack of maintenance of the sewer (Cloaca Maxima) designed by the ancient Romans to drain the water from the Forum.
The section of Campo Vaccino beyond the road was occupied by a long series of religious buildings and small dwellings. The view shows (green dot) Oratorio dei Frati della Via Crucis, a lost oratory which served as the starting point for processions towards Colosseo, where Pope Benedict XIV built the Stations of the Cross. The oratory belonged to the brotherhood of the Amanti (lovers) di Gesù e Maria al Monte Calvario and in some texts it is referred to with the name of the brotherhood which appeared on the lintel of the building. It was located next to the entrance to SS. Cosma e Damiano. The oratory does not appear in plate No 32 so its construction must have occurred after 1753. It can be seen in an 1865 engraving by Philippe Benoist.

The excavations led to the demolition of all the dwellings to the left of Tempio di Antonino e Faustina and brought to light some walls and columns of Basilica Aemilia, one of the first buildings of this kind. The excavations freed the lower part of the columns of Tempio di Antonino e Faustina, as well as of nearby Tempio di Romolo (SS. Cosma e Damiano) (its ancient entrance which had been moved to a higher position in 1632, was brought back to its original location).

This section of the etching shows the church of S. Maria Liberatrice built upon an older church (S. Maria Antiqua) and the section of the road across which the Farnese used to build a temporary triumphal arch to celebrate the procession which accompanied newly elected popes to S. Giovanni in Laterano. The etching shows also the exact location of the main gate of Orti Farnesiani. Arco di Tito retained very little of its ancient majesty: the Frangipane had turned it into the only entrance to their fortified quarters.

The excavations led to the discovery of the area where the Vestal Virgins had their residence and of the round temple (in part rebuilt) where they held a sacred fire.

This part of the etching shows to the left of a single column the dogana (customs) where a tax on each cow brought to the market was paid. The fiscal system of the papal state was mainly based on such kind of taxation: in addition the state had the monopoly of some activities including lotto, a popular lottery. Only on rare occasions, such as for funding repairs after an earthquake, the popes made use of a sort of income tax: the total amount needed by the Treasury was allocated among the various guilds existing in Rome and each guild in turn decided how to collect the tax among its members.

The purpose of a single column which stood in Campo Vaccino was unknown at the time of Vasi. In plate No 31 he just referred to it as Colonna sola (alone). In this etching he gave credit to a theory which stated that the column was the only left of a series which supported a bridge linking Campidoglio to the Palatine. This explanation as well as other more or less bizarre theories about the monuments of ancient Rome was due to the fact that many inscriptions were buried in the ground. The excavations brought to light a dedicatory inscription which clarified the purpose of this column. It celebrated the Byzantine Emperor Foca (Phocas).