- Vienne: Saint-Romain-en-Gal
(relief at Glanum and quotation from Pliny: "It is More Similar to Italy than to a Province")

You may wish to see an introductory page to this section or a page on Roman Vienne first. 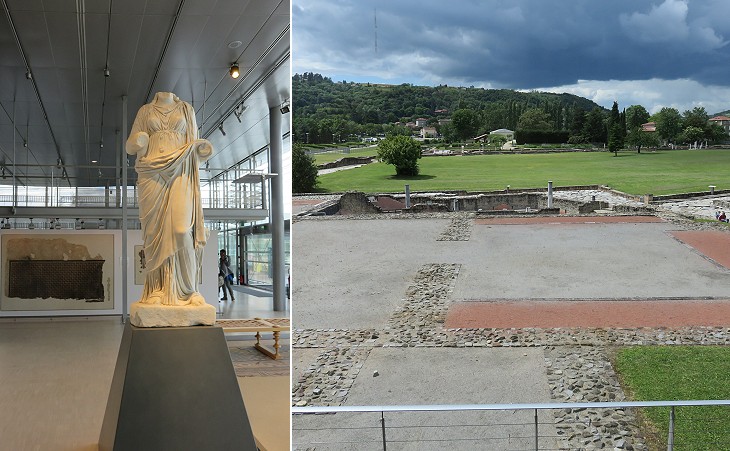 A 1659 book by Nicholas Chorier on the ancient monuments of Vienne mentioned the ruins of Palais du Miroir in the vineyards at Sainte-Colombe near Saint-Romain-en-Gal on the right bank of the River Rhône opposite the town. Chorier reported the general opinion that the building was a palace built by Pompey and that the reference to Miroir was due to a gigantic mirror which Pompey's mistress placed in their bedroom. In the XIXth century the site was properly investigated, many statues were found and it was identified as a bath establishment. Inscriptions, pottery and other findings in addition to those at Palais du Miroir suggested to undertake a large excavation campaign which in 1968 unearthed a whole Roman neighbourhood with rich houses, workshops, baths and harbour facilities. In 1996 the Museum and Archaeological Site of Saint-Romain-en-Gal was inaugurated. Archaeological site: the two peristyles of the House of the Oceanus Gods

The most interesting finding at Saint-Romain-en-Gal is a large house of the late IInd century AD which replaced two smaller ones. It resembles those found at Pompeii which have large peristyles with gardens and fountains. Considering that the climate of Vienne is not that of the Italian peninsula the layout of the house shows that the landlord was prepared to forgo some practical aspects in order to show his guests a very "Roman" mansion or that he lived there only in summer. 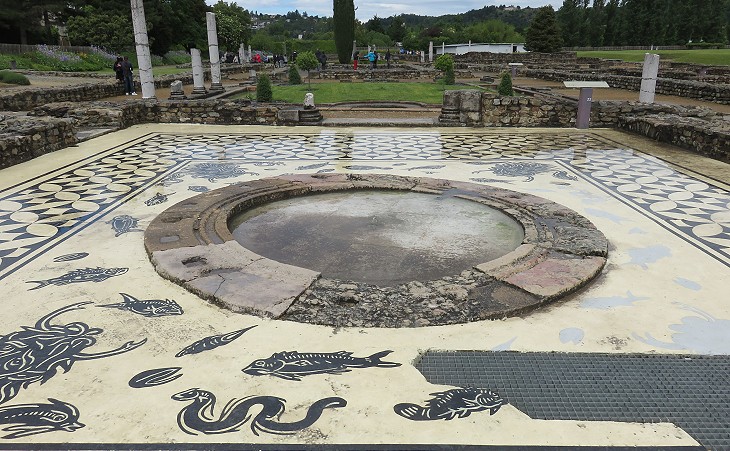 Archaeological site: House of the Oceanus Gods: mosaic after which the house is named

It is possible that the landlord came from Rome; anyhow he was aware that the rich Romans highly praised black and white mosaics, while in the provinces those who wanted to exhibit their wealth preferred more expensive coloured mosaics; the mosaic portraying heads of Oceanus and sea creatures after which the house is named would have been a coloured one at Thuburbo or Neapolis in today's Tunisia. The landlord of this house chose differently because by using black and white he followed the example of many emperors from Augustus to Hadrian and Caracalla. 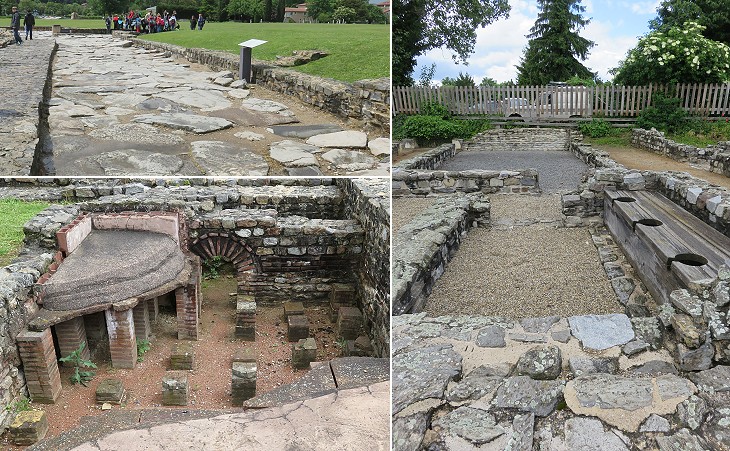 When one finds out that the same construction techniques were employed in all the provinces of the Empire and considers that engineering schools did not exist and the circulation of written texts was very limited, he is drawn to conclude that the Roman army was the repository of technical knowledge, because of its presence everywhere. Marcus Vitruvius Pollio, the author of De Architectura, a treatise on architecture, was most likely an army engineer who served under Caesar. Construction techniques which were developed for military uses spread to civilian ones. Archaeological site: Baths of the Wrestlers: Hall of the Latrines

A public bath establishment which was found at Saint-Romain-en-Gal gave archaeologists some hints about the development of the neighbourhood; it was built in ca 65 AD and it was redesigned in the late IInd or early IIIrd century when it was decorated with fine marbles and frescoes. It was most likely abandoned before the end of the IIIrd century, perhaps because of the disruption caused by the short-lived Gallic Empire (260-274). Similar to what can be noted in many other bath establishments (e.g. at Sabratha in Libya) latrines were placed in a luxury hall. 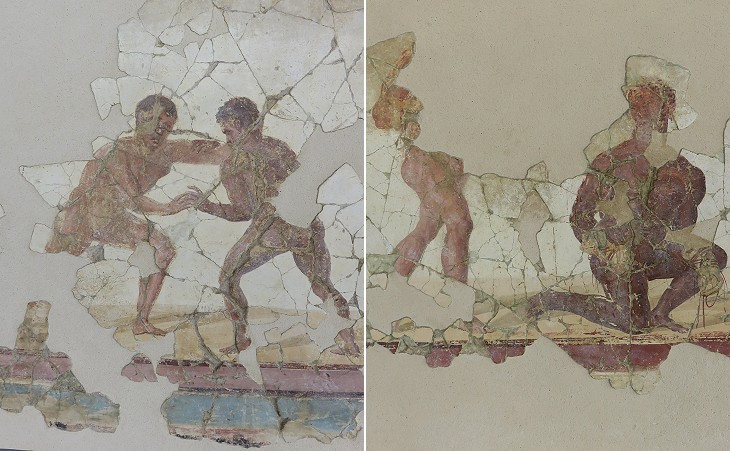 Museum: frescoes found in the latrines of the Baths of the Wrestlers

Had the excavations been carried out in the XIXth century the frescoes which decorated the latrines would have been lost because they were found in very tiny pieces and at that time there were no techniques for properly reassembling them. A careful restoration shows that they depicted some of the physical activities which were performed in the establishment. These are shown also in many floor mosaics e.g. at Ostia and in Tunisia. Museum: frescoes found in the houses of the archaeological site

The careful work of restorers was able to save also some fragments of frescoes in the houses. They show flowers, birds, vases, candelabra (sort of chandeliers) on a dark background which brings to mind paintings at Herculaneum and Pompeii. The quality of the frescoes is excellent and it could stand comparison with works by a still life Flemish or Dutch Renaissance painter (see other fine paintings of plants and birds at Villa di Poppea near Pompeii). 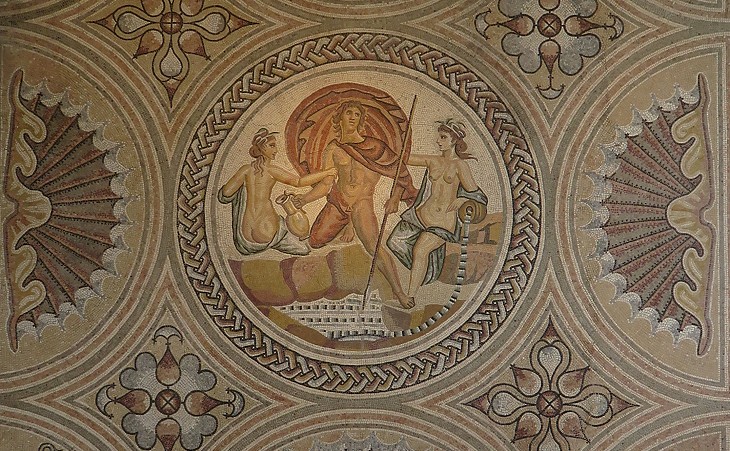 Museum: Mosaic of Hylas Abducted by the Nymphs (early IIIrd century AD) found outside the archaeological area in 1902

The construction of the museum of Saint-Romain-en-Gal with its large halls had also the purpose to properly display the many floor mosaics which were found in Vienne and its environs and for which the Saint-Pierre Lapidary Museum had no space.
The mosaic which portrays Hylas is interesting in two respects: a) it shows how popular was this tale which is almost forgotten today; b) it shows that the iconography of the young friend of Hercules, including the red colour of his cloak, was clearly fixed because Hylas is portrayed in the same way as in a famous opus sectile (marble inlay) found in Rome and in another mosaic at Volubilis in Morocco.

This mosaic departs from the traditional design where bands, frames and other geometrical elements isolate a series of small scenes. It is possible that the artist who made it started by imagining grapevines coming out from kantharos, cups used for drinking wine, a popular decorative motif (see mosaics in Rome, Tunisia and Algeria) and then instead of populating them with Cupids and animals he turned the mosaic into a depiction of Ambrosia and Lycurgus. She was a follower of Bacchus who was attacked by Lycurgus, King of Tracia; before the villain could kill her she turned into a grapevine (and this is how she is portrayed in this mosaic) and she tied Lycurgus (see other mosaics on this episode at Djemila and Herculaneum which show Ambrosia before her metamorphosis). It is a tale which brings to mind that of Apollo and Daphne. Museum: Mosaic of Ambrosia and Lycurgus: (left-above) Bacchus and one of his male followers; (left-below) Pan and a maenad, a female follower of Bacchus; (right) Lycurgus trying to escape from the grapevine; another detail of this mosaic is shown in the image used as background for this page

The mosaic most likely decorated a triclinium, a formal dining room; the hall had a sort of apse where the couches of the landlord and of an important guest were placed and in that section Bacchus and Pan were portrayed in a very relaxed pose while drinking next to one of their followers. 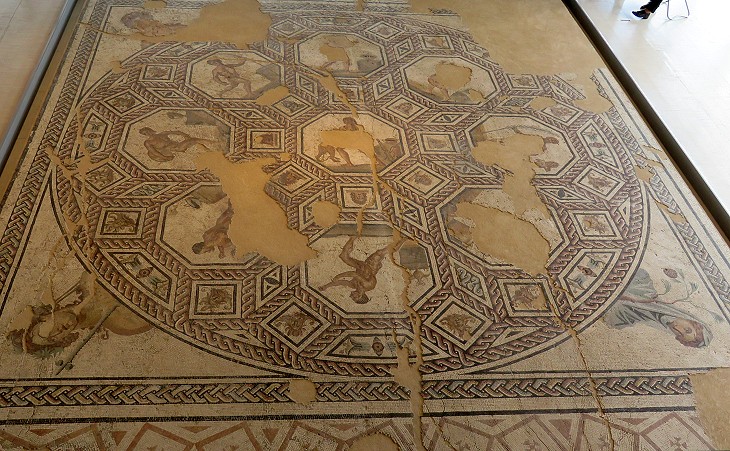 Mosaic makers had techniques for distributing small scenes or figures in a large geometric mosaic. The Four Seasons were perfect for filling the angles and leaving room for a circular or octagonal section as one can see in a famous mosaic of Neptune at the Museum of Bardo in Tunis. In this highly complex mosaic the geometric decoration was made less heavy by small square or diamond sections portraying theatrical masks or heads of Oceanus. In a way this mosaic is the opposite of the previous one which is characterized by a single subject. 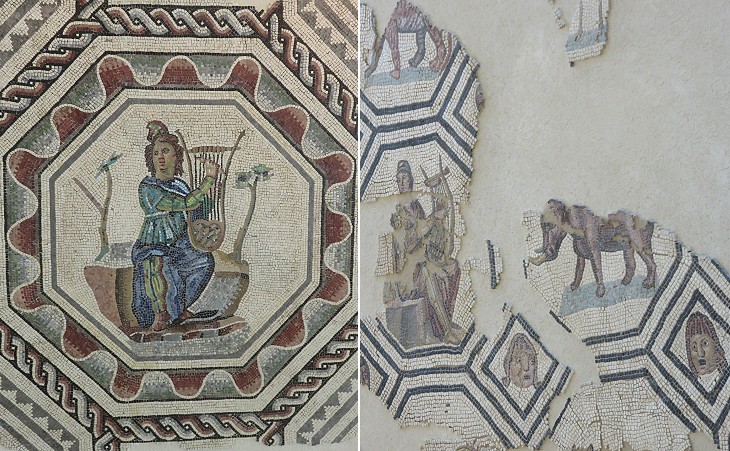 With his songs, Orpheus, the bard of Thrace, allured the trees, the savage animals, and even the insensate rocks.
Ovid - Metamorphoses - Book XI - translated by More, Brookes.
Orpheus was among the most popular subjects for mosaics because it allowed to portray many animals either in one crowded scene as at Antioch and Philippopolis or in a series of medallions as at Vienne. This subject had an influence on early Christian mosaics. 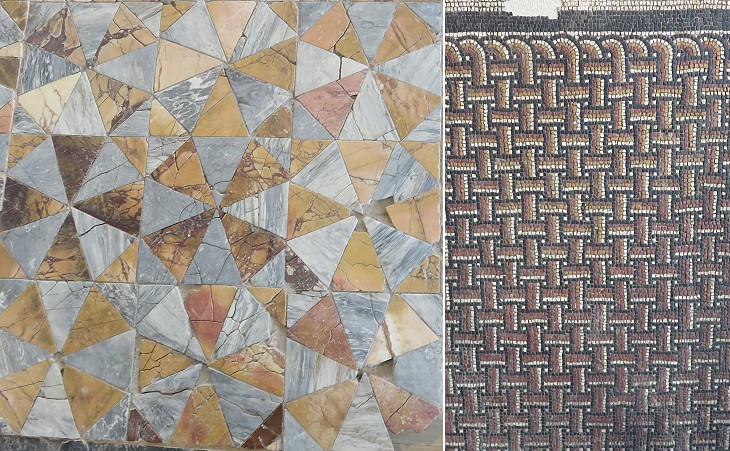 Excavations made for the construction of modern buildings in the environs of Vienne often led to the chance discovery of Roman houses and of their fine floors. The use of pieces of coloured marbles to decorate floors became common when the decay or pulling down of rich houses or monuments made available a large number of marble fragments. You may wish to see the baths of Villa dei Quintili along Via Appia Antica or the opus sectile floors which were found near Seville. 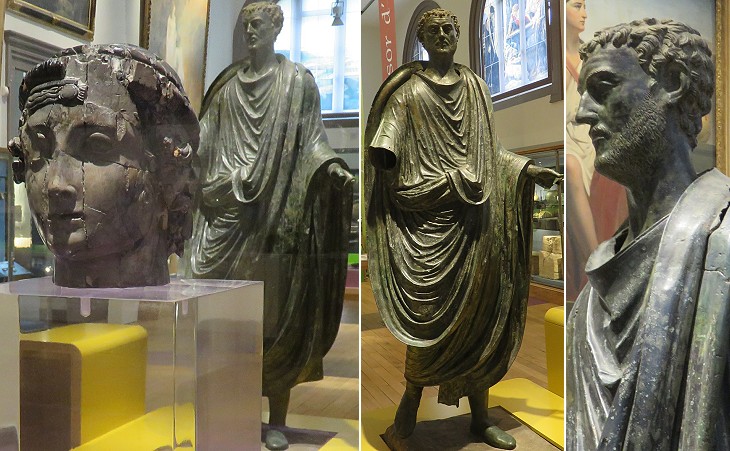 The museums of Saint-Pierre and Saint-Romain-en-Gal are not the only ones at Vienne which show works of art of the Roman period. A limited number of relatively small exhibits are on display in a museum which was inaugurated in 1895 mainly to house paintings and faience. The statue of Pacatianus was found in 1874 broken into very many small pieces. Similar to that of the God of Coligny at Lyon it was reassembled. The head is clearly too small for the body, so either the fragments belonged to two statues or the head (which is less old than the body) replaced a previous one. A separate bronze inscription which was found in the same location suggested that the statue portrayed Caius Julius Pacatianus, a magistrate from Vienne who held many offices at the time of Emperor Septimius Severus and was the patron of Italica, but the inscription could refer to another statue. 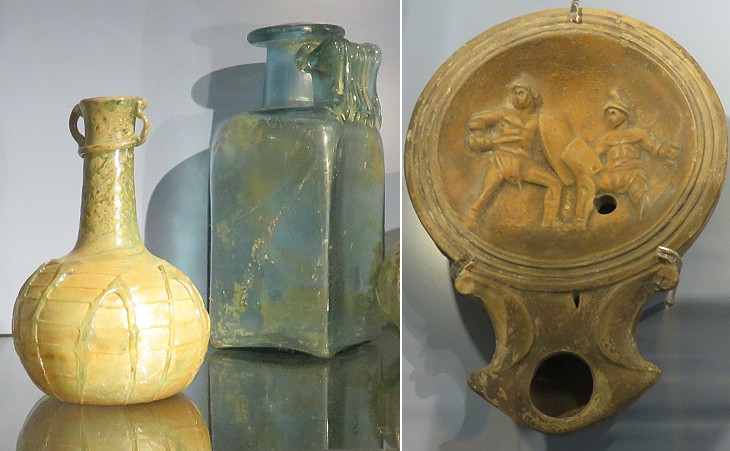 The exhibits of the museum show that also everyday objects were made with attention to their design and decoration. 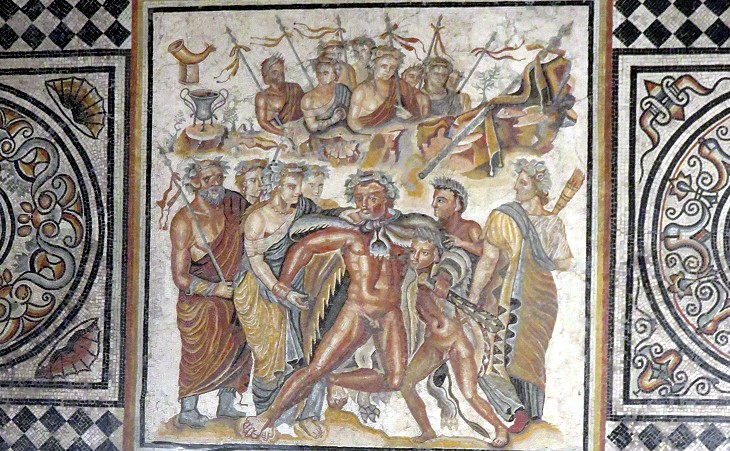 Gallo-Roman Museum of Lyon-Fourvière: detail of the Mosaic of the Drunken Hercules (IIIrd century AD) found in Vienne in 1841 (see a similar mosaic at Philippopolis and the same scene in a sarcophagus at Lyon)

Vienne did not have a suitable location where to house some fine mosaics which were found in the first half of the XIXth century, so they were sent to Lyon and today they are some of the must-see of the new museum of that town. A large geometric mosaic is named after a detail which shows how the ancients, for whom Hercules was the prototype of the forceful hero, were at the same time willing to have a laugh behind his back because he got drunk at the wedding of Bacchus and Ariadne. 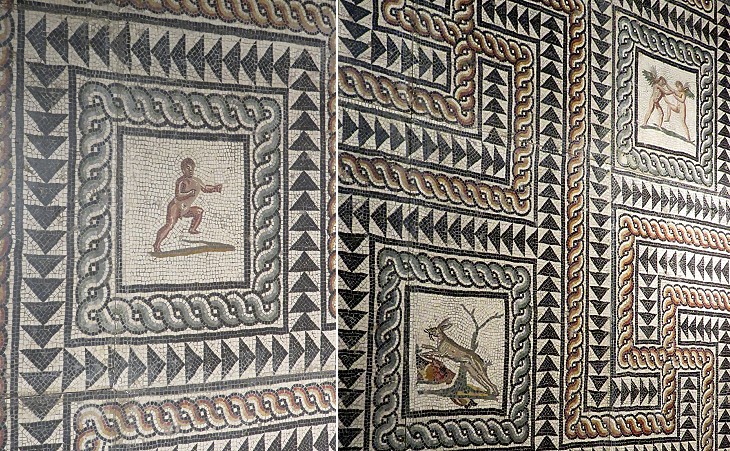 Gallo-Roman Museum of Lyon-Fourvière: Details of the Mosaic of the Wrestling and Hunting Cupids (IInd century AD) found in Vienne in 1822, in which small scenes are placed in an elaborate geometric frame which reminds of the Labyrinth, the maze of Knossos