At six o'clock (Feb. 6. 1800) we pursue our journey to Mout. The weather is again fine. The road lies over the highest ridges of the mountains, where, amidst the forests of pines, are several beautiful valleys and small plains, forming with the surrounding rocks and woods the most beautiful scenery. (..) We begin to descend into the valley where this town is situated.
William Martin Leake - Journal of a Tour in Asia Minor - 1824
The Taurus Mountains with several peaks above 10,000 ft run parallel to the Mediterranean Sea and separate a usually narrow coastal strip from the Anatolian tableland. In ancient times they were (and still are) covered by forests and were inhabited by the Isaurians, mainly shepherds who were regarded almost as barbarians by the Hellenized populations of the cities. The Calicadnus River (today Goksu) makes its way towards the Mediterranean Sea across the Taurus; its valley reaches a width of twenty miles before the river empties into the sea near Silifke (ancient Seleucia ad Calicadnus). 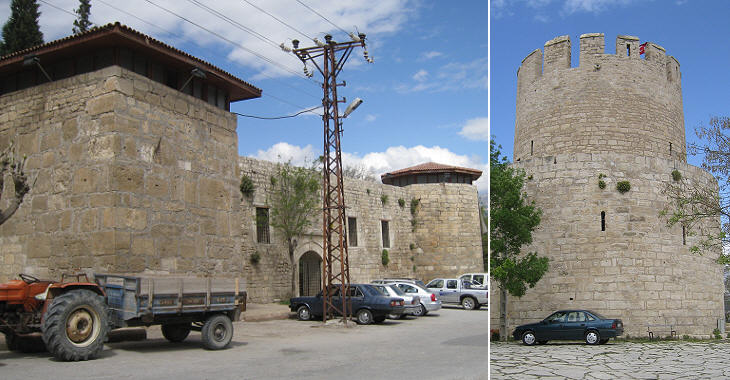 Fortress: (left) side towards the town; (right) donjon

The walls of the castle are surmounted with battlements, flanked by square towers open to the interior. In the middle is a round tower. (..) On one side of the castle is a precipice, the foot of which is washed by a river. (..) Among the ruined mosques and baths, which attest its former prosperity as a Turkish town under the Karamanian kings, a few hovels made of reeds and mud are sufficient to shelter its present scanty population. In leaving Mout this morning, we particularly admired the fine effect of the castle with its round and square towers. Leake
At the centre of the valley a small hill was inhabited from the time of the Hittites; after the conquest of the region by the Romans, a colony was founded to control the Isaurian tribes in the mountains. It was named Claudiopolis after the emperor who gave it colonial status. It was tentatively identified in 1800 with modern Mut by Leake. The city's identity was confirmed from epigraphic evidence at the end of the XIXth century. Little remains of Claudiopolis, apart from reused building material and inscriptions in Mut and in the walls of the castle.
In the XIIIth century the emirs of Karaman expanded their territories by conquering parts of the coastal strip and the Calicadnus valley acquired key importance for them. The fortifications of Claudiopolis (by then known as Mut) were strengthened; the current fortress belongs to a large extent to that period. (left) Lal Aga Camii; (right) one of two identical mausoleums behind the mosque (with a stork nest)

Pillars of verd-antique, breccia, and other marbles, lie half- buried in different parts, or support the remains of ruined mosques and houses. (..) Among the most remarkable of the modern buildings, is an old Turkish mosque, with the tomb of Karaman-Oglu, its founder. Leake
The main mosque of Mut was built in the XIVth century by a Karamanid governor of the town, who is thought to be buried in one of the kumbets (mausoleums which are typical of Seljuk architecture) behind the mosque. The portico is supported by ancient columns. 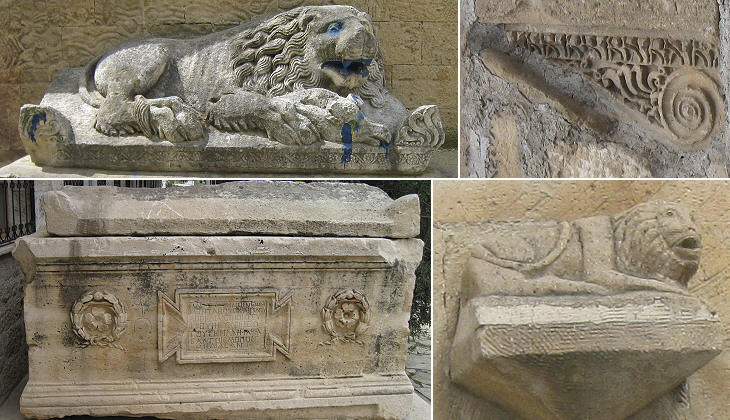 Memories of the past in Mut's gardens and fortress

On quitting the town, we pass along the ancient road, which led through the cemetery. Sarcophagi stand in long rows on either side; some entire and in their original position, others thrown down and broken; the covers of all removed, and in most instances lying beside them. The greater part were adorned with the usual bull's head and festoons, and had a Greek inscription in a tablet on one side. The letters were sufficiently preserved to indicate the date to be that of the Roman Empire. We looked in vain for the name of the city. Leake
In 1468 Ottoman Sultan Mehmet II (the conqueror of Constantinople) waged war on the Karamanids and defeated them: the inclusion in the vast Ottoman Empire meant a significant loss of importance for Mut. 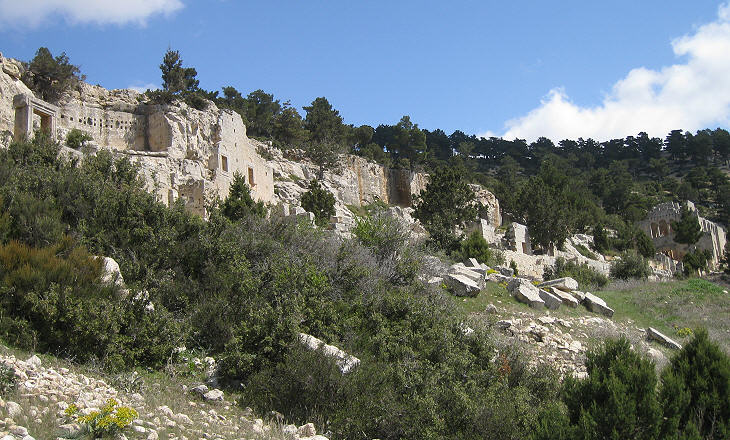 The site of the Alahan Monastery

The ruins of a Byzantine monastery lie above the road between Karaman and Mut; they are situated about 3,000 feet above the Calicadnus valley and 4,000 feet above sea level. The monastery was built on a partly artificial terrace having an east-west direction. The site is named after a nearby village. It was first visited by Léon de Laborde, son of Alexandre de Laborde, (Voyage en Asie Mineure - 1838) and it was described in detail by Arthur Cayley Headlam, an English theologian (Ecclesiastical sites in Isauria - 1892). 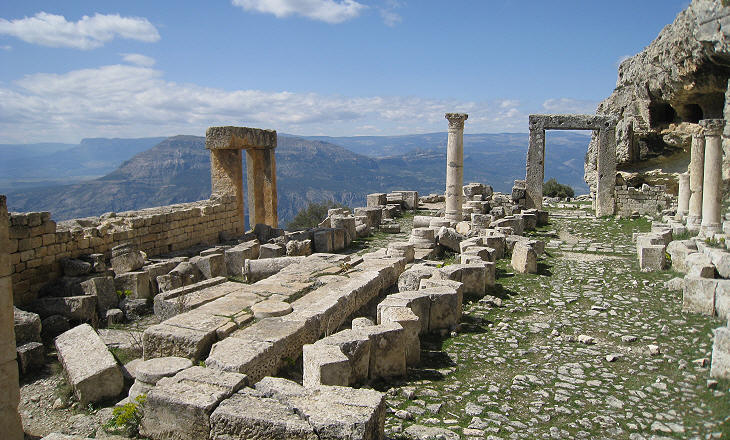 The foundation of the monastery could be due to a campaign for the eradication of pagan beliefs; it is known that the Christian faith was first embraced by the inhabitants of the cities and only at a later period by the rural population (pagan derives from Lat. pagus, village). It is possible that a cave at the eastern end of the terrace was the site of a local shrine and that the construction of the monastery was aimed at stopping its worship. 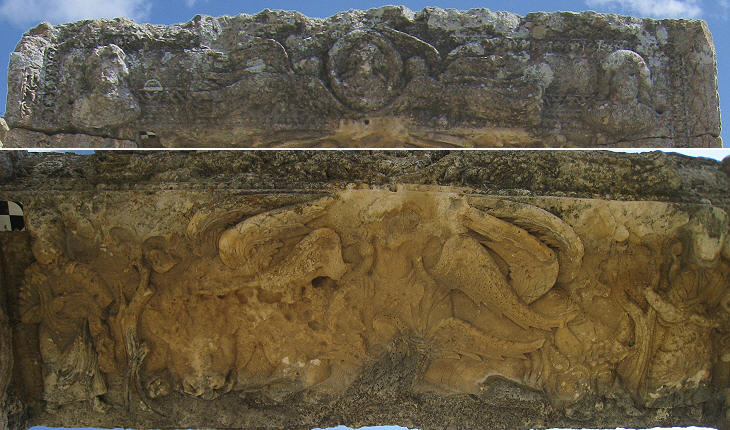 Western church: lintel above the entrance decorated with reliefs showing Jesus, angels and saints on both the front (above) and lower (below) sides

The construction of the monastery is thought to have occurred in the Vth-VIth centuries; most archaeologists believe that it was built at the initiative of the Eastern Roman Emperor Zeno who was of Isaurian origin; the elaborate decoration of the buildings is seen as evidence of his patronage although others believe it is due to a local tradition. 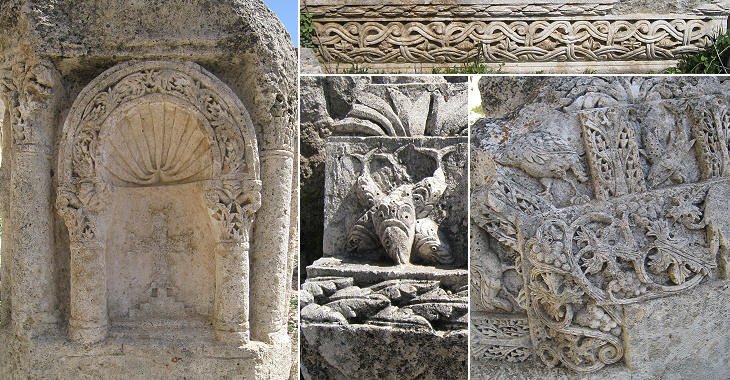 Western church: details of the decoration with an early example of horseshoe arch

The elaborate decoration could be an indication that Alahan was not just a monastery, but also a shrine and the site of pilgrimages; in this case the many buildings (partly cut into the rock) surrounding the churches were lodgings for pilgrims, rather than cells for the monks. 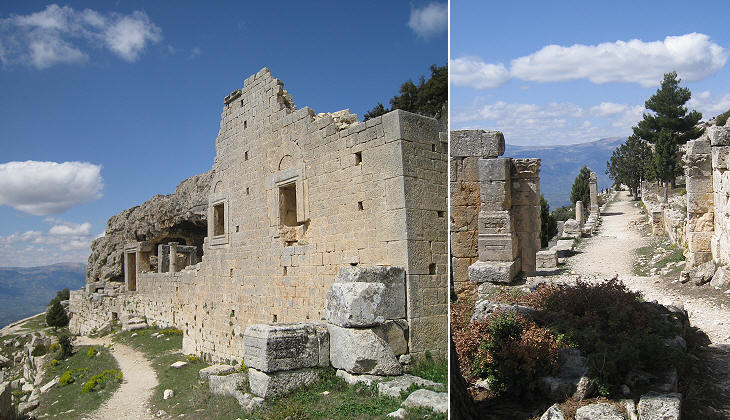 Access to the site was possible only from its western end; from there a colonnaded street led to the eastern church which was built first; this street is another element supporting the theory that Alahan was a site of pilgrimages. Unfortunately the rich decoration was not accompanied by many inscriptions, so archaeologists have to make educated guesses. The eastern church was a large building with three naves each of them having a very decorated entrance; they were preceded by a (lost) narthex; as were all the buildings of the complex the church was built by making use of carefully cut and assembled stones, without mortar or bricks, similar to what can be noticed in Byzantine churches in Syria, e.g. Qalb Lozeh. 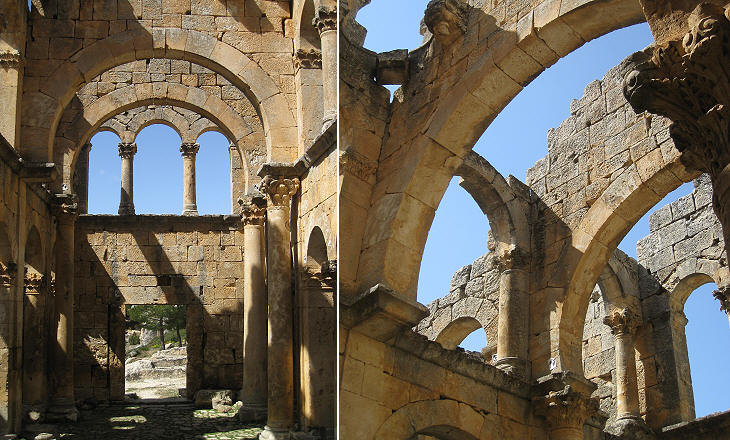 Eastern Church: views of the interior

The structure of the building was strengthened by a wide use of arches which notwithstanding earthquakes and lack of maintenance have withstood the injuries of time. 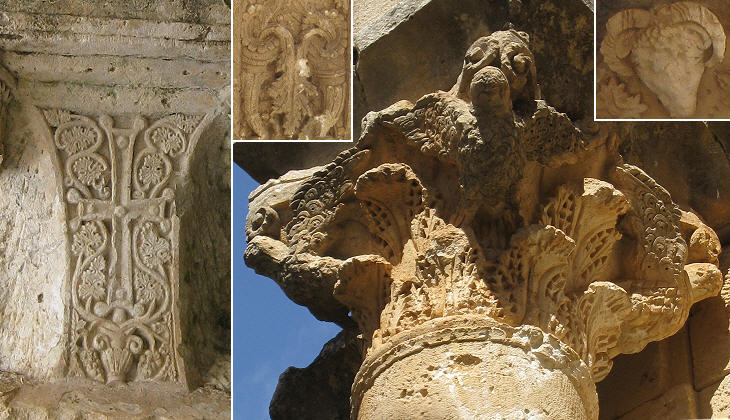 The site does not show evidence of destruction or fire, so it is thought that it was abandoned before the VIIth century Arab invasion. The reasons for the monks leaving such an important complex can only be guessed; it is possible that the practice of living in a community (coenobites) underwent a period of crisis and that the monks preferred to live as hermits (anchorites) or that the monks at Alahan belonged to Christian doctrines, such as Monophysitism or Nestorianism, which were declared heretical. 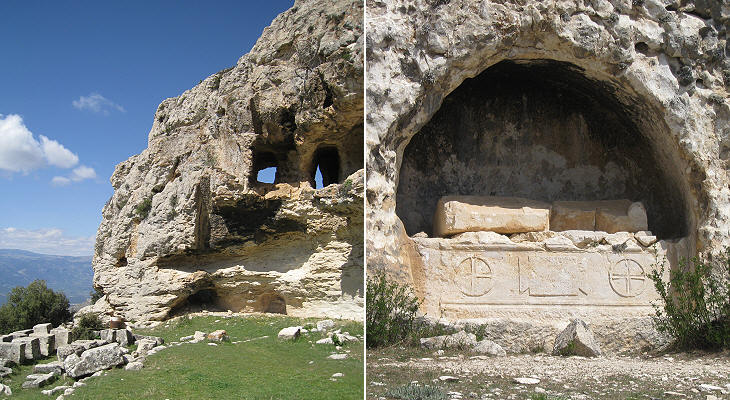 (left) Buildings cut into the rock; (right) a sarcophagus showing the traditional Roman frame for inscriptions between two crosses

The image used as background for this page shows a relief portraying a fish, a Christian symbol.