- Apamea
(a section of the Colonnade)

We travelled about twelve miles over a sort of a desert, and arrived at Hamah, which has generally been thought to be Apamea. (..) But Strabo says, that about Apamea there was much marshy and meadow ground, and that the Orontes and a great lake made it a peninsula; and he adds, that Seleucus Nicator, and the other kings of Syria, kept there five hundred elephants, and a great part of their army, on account of the great convenience of forage. But Hamah is situated in a narrow valley, having high ground on each side of it. (..) On the whole, it is not certain where Apamea, at first called Pella by the Macedonians, was situated. (..) When I was about half way between Shehoun and Marrah (on my way to Aleppo), I was told by one of Asia minor, who was in the caravan, that about a league and a half to the east there was an obelisk, some sepulchres, and other ruins, which he had seen when he formerly travelled that way.
Richard Pococke - A Description of the East and Some Other Countries - 1745 Former acropolis of Apamea (today the village of Qalaat al-Moudiq)

We arrived at the foot of the hill upon which stands Kalaat el Medyk or the castle of Medyk. It probably occupies the site of Apamea. (..) Notwithstanding our desire to enter the castle, we could not venture to do so; (..) we therefore passed by the foot of the hill, while we sent in our attendants to buy some provisions. The castle is built upon an almost insulated hill and (..) it is built of small stones, with several turrets, and is evidently of modern construction. (..) I was told that the only relic of antiquity is a wall in the governor's palace, built with large blocks of stone. At the western foot of the hill is a warm sulphureous spring, the water from which forms a pond; on the edge of the pond I found a fragment of a fine fluted Doric column. (..) On the N. side of the hill are several columns scattered about.
Johann Ludwig Burckhardt - Journal of a Tour from Aleppo to Damascus in February and March, 1812.
The acropolis of Apamea was located in a commanding position in the valley of the River Orontes; there is evidence that the site was populated from Hittite times, but it became an important settlement only after Seleucus, a general of Alexander the Great, founded an empire which included Syria and most of Anatolia. Seleucus gave the town the name of his wife Apama. Apamea expanded in the plain to the east of the acropolis and became one of the four great cities of the Syrian Tetrapolis with Antioch, Seleucia Pieria and Laodicea (today's Latakya). 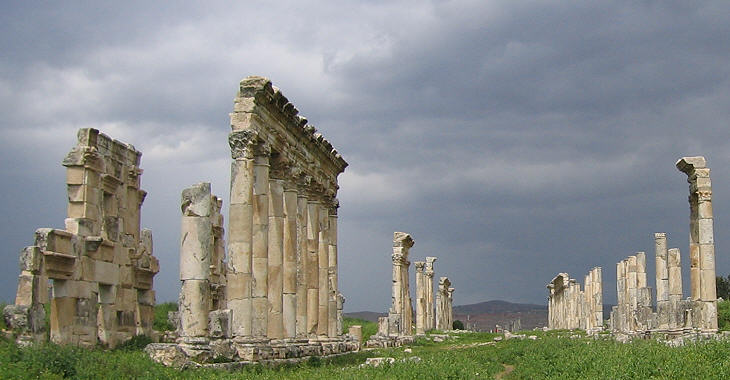 The colonnade seen from its southern end

From Hama, the Orontes takes a westerly direction; then to the northward, and in less than three hours we again joined the river; (..) we entered on a fine plain, which only required the plough to render it very productive; (..) we proceeded across a large plain, whose exuberance in wild herbs and flowers sufficiently announced the fertility of the soil.
Travels through part of the ancient Coele Syria and Syria Salutaris - from the papers of Lieutenant Colonel Squire - Edited by the Rev. Robert Walpole - London 1820.
At the beginning of the XIXth century the plain of the River Orontes looked abandoned and unpopulated to western travellers, but in ancient times it was intensively farmed. Apamea was an important military base for the Seleucid kings as it protected the way to Antioch, the capital of their empire. The citadel of Apamea was destroyed in 64 BC by Pompey, but the Romans promoted the development of the city in the frame of their overall policy aimed at expanding farming and increasing stable settlements as a mean to control the territory. It is thought that Apamea and its surrounding district reached 500,000 inhabitants at the beginning of the Ist century AD. 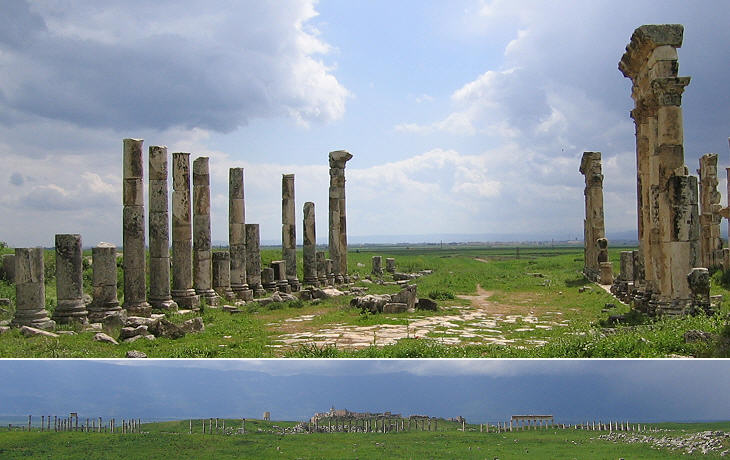 On December 13, 115 AD a disastrous earthquake struck Apamea; at that time Emperor Trajan and his successor Hadrian were in the region and Apamea was soon rebuilt. Many honorary inscriptions celebrate Lucius Julius Agrippa, a wealthy citizen of Apamea who acted as ambassador of his city to the Roman Senate and to the emperor; notwithstanding his Roman name, he belonged to a very important local family. 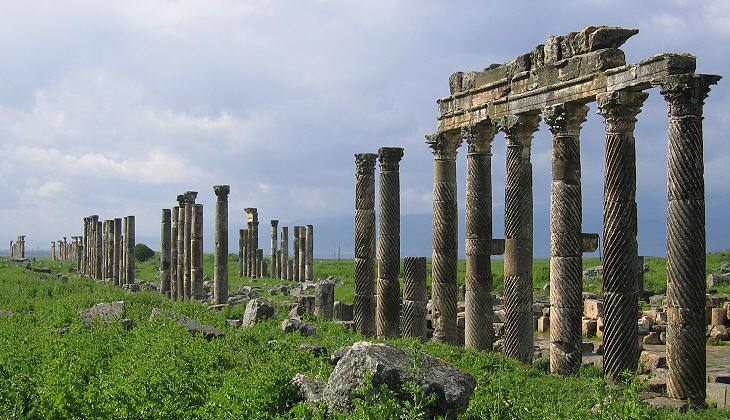 Section of the colonnade with (alternating) fluted columns

The age of Trajan and Hadrian was marked by an extraordinary construction activity which included the first stone bridge on the Lower Danube and Hadrian's Wall in northern England in addition to aqueducts, temples, baths, arches, markets and roads throughout the empire. Apamea was rebuilt in line with this tendency to express the strength and wealth of the empire through gigantic public facilities. (left) Fragment of a relief; (right) columns with pedestals for small statues, similar to those of the Colonnade of Palmyra

The plan of Apamea before the earthquake was already based on a grid, but this layout was emphasized in the reconstructed city by an impressive Cardo Maximus, its main north-south oriented street. The importance given to the north-south axis was due to the fact that the key road from Antioch to southern Syria crossed Apamea in that direction. 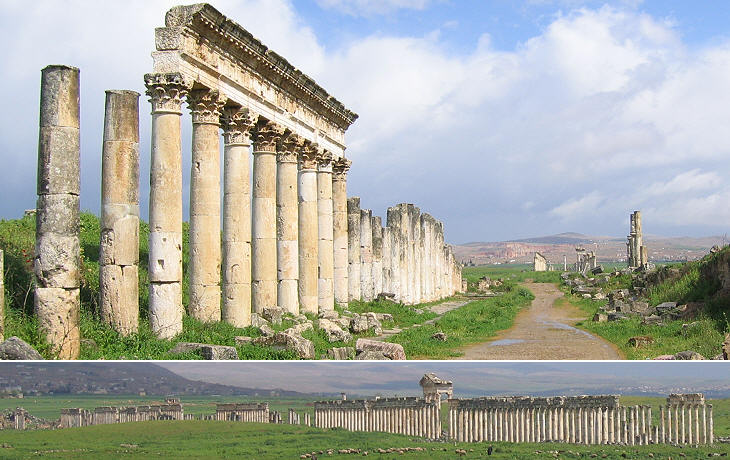 Colonnade: central (above) and northern (below) sections

Cardo Maximus had a length of over a mile and it was flanked by two uninterrupted porticoes; their construction started from the northern gate and it was completed in about 50 years. A higher column or a tympanum indicated the presence of temples, baths or markets at the side of the street.

The wealth of Apamea resided in part in the prestige of an oracle housed in a temple to Zeus Belos (a deity having features of Jupiter and Ba'al - see its shrine at Baetocece). It is known that Emperor Septimius Severus used to consult the oracle prior to campaigning against the Parthians. At the request of the Bishop of Apamea the Temple to Zeus was destroyed by Emperor Theodosius in 385. 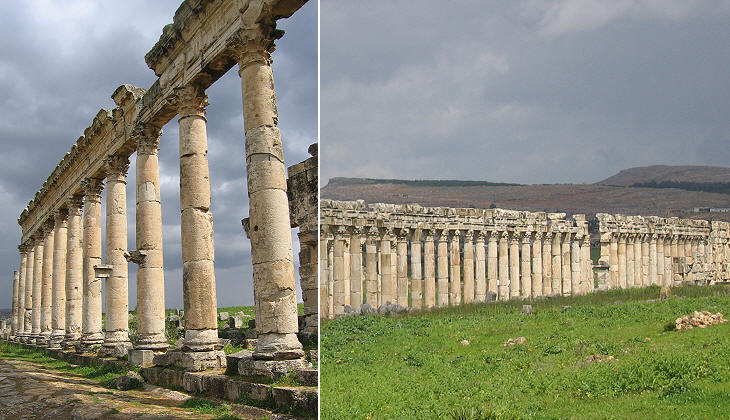 Sections of the colonnade near the northern baths

Kul'at el-Mudik is a modern castle, at least it is not older than crusading times. (..) N.E. of the castle, on a level plateau lie the splendid ruins of Apamea - now completely desolate. The walls of the ancient city are in most places gone, and the private dwellings and public edifices are almost all prostrate. Destruction has done its work, yet the materials remain as monuments of former grandeur. (..) The main street of the city extends in a straight line a distance of about 1 m.; and along, each side is a Corinthian colonnade. The shafts of the columns are curiously varied - some plain, some fluted, and some with spiral grooves winding round them from top to bottom. The height of the order, including pedestal, capital, and entablature, was about 30 ft. At intervals along the sides of the street were rectangular recesses, also encircled with colonnades. The columns in one of these are 4 ft. in diameter and 34 high; and though prostrate, they are yet perfect pedestal, shaft, capital, and entablature, all lying, as if waiting to be set up again. (..) Neither Palmyra nor Gerasa has suffered so much from the hand of the destroyer as Apamea.
A Handbook for Travellers in Syria and Palestine - Murray 1868
The site was identified as that of Apamea in the middle of the XIXth century and initial excavations led to a good understanding of the layout of the ancient town. 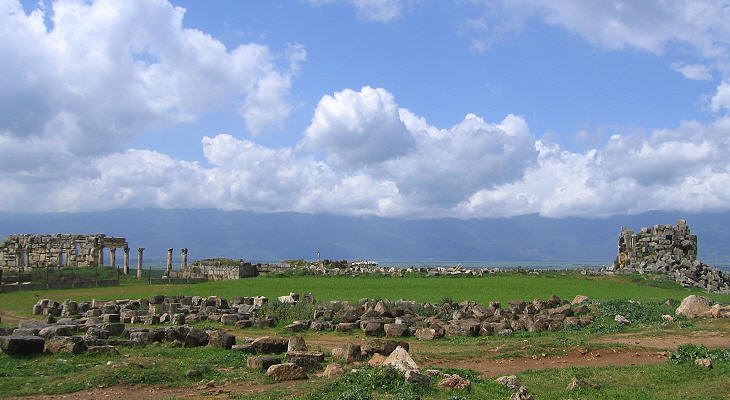 Final section of the colonnade and northern gate

Systematic archaeological campaigns started after France was given a mandate over Syria in 1923. During the 1930s a major effort was conducted by a team of Belgian archaeologists and some of the works of art they found were sent to Brussels. The campaigns focused on Cardus Maximus where some 400 columns were re-erected, whereas other parts of the city are still to be explored.