Ariccia
(a detail of G. Vasi's Grand View of Rome)

The son of fam'd Hippolytus was there,
Fam'd as his sire, and, as his mother, fair;
Whom in Egerian groves Aricia bore,
And nurs'd his youth along the marshy shore,
Where great Diana's peaceful altars flame. 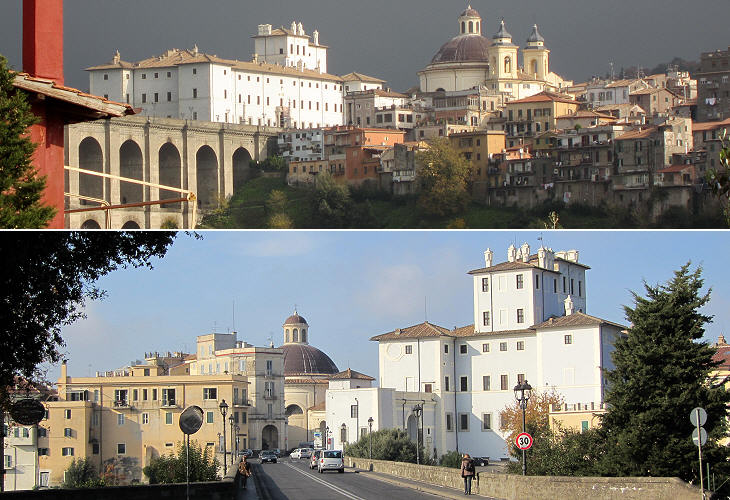 Ariccia seen from S. Maria della Stella (Albano) (above) and from the road to Genzano (below)

At the time of Emperor Augustus Virgil, similar to other Roman writers, linked the origin of Rome to Greece and Troy; he assumed that Aricia, the name of a small town along Via Appia derived from a nymph who bore a child to Hippolytus, son of Theseus, the founder of Athens. According to the Greek myth Hippolytus was unjustly charged with having raped Phaedra his stepmother. Theseus cursed him and asked Poseidon, god of the horses, for help and on that same day Hippolytus was crushed to death during a stampede of his own horses. A Roman addition to this tale said that Artemis/Diana asked Asclepius, the god of medicine, to revive the young man who concealed himself for the rest of his life in a grove sacred to the goddess at Ariccia. 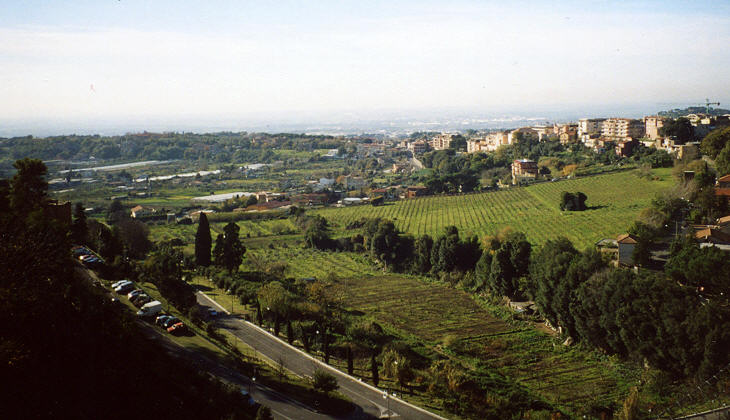 Volcanic valley between Ariccia and Albano

Ariccia stands over a bowl-shaped valley, the crater of an extinct volcano. The Latins, the ancient inhabitants of southern Latium, believed that the area was a sacred one because of its volcanic landscape and thick woods which surrounded two nearby small circular lakes (see a page on the relationship between woods and the earliest shrines). In these woods they worshipped Diana, goddess of pregnant women to whom she granted a delivery free from pain. Eventually Diana was associated to Greek Artemis. After the destruction of Alba Longa by the Romans the Latins built a sanctuary to Diana at Ariccia, although it is generally thought that Ariccia was just the starting point of a sacred way leading to the actual shrine in the woods surrounding Lake Nemi. 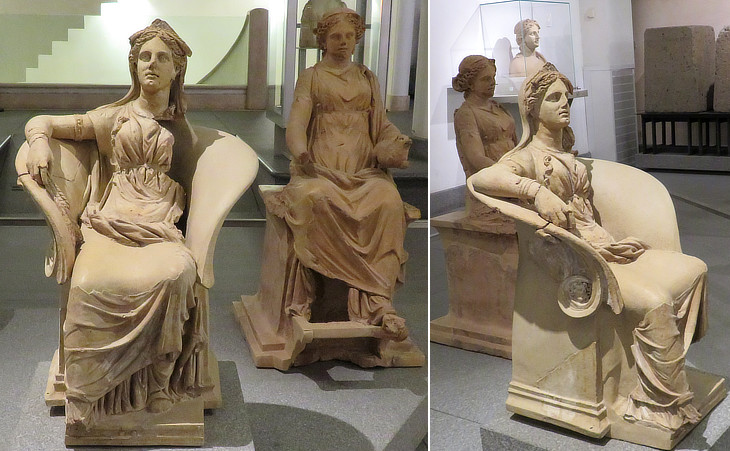 Museo Nazionale Romano: votive terracotta statue of Demeter from a shrine to her and Kore which was found in 1927 in Valle d'Ariccia

A sanctuary near Ariccia was dedicated to Demeter (Lat. Ceres) and Kore (Lat. Proserpina) in their role of patrons of agriculture. Demeter holds ears of corn as symbol of crops. 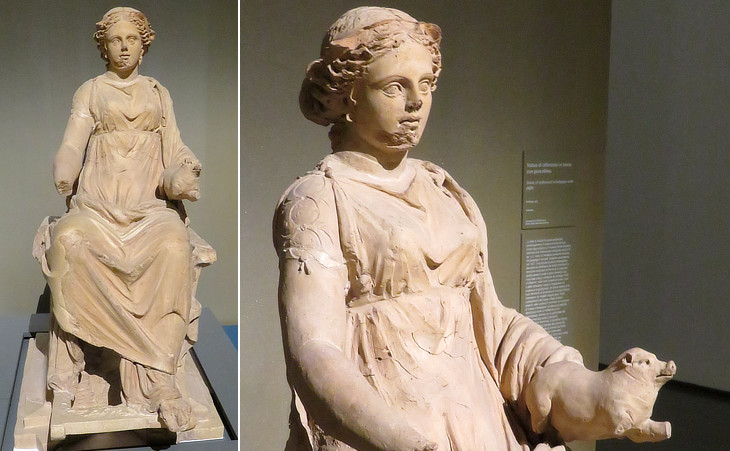 The offer of a piglet could indicate that maybe even in antiquity Ariccia was known for its "porchetta" (roasted baby pork), but the sacrifice of piglets was typical of the worship of Demeter and Kore during a festival dedicated to them (see a relief showing Hercules offering a piglet). The statues are dated late IVth century BC or early IIIrd century BC. 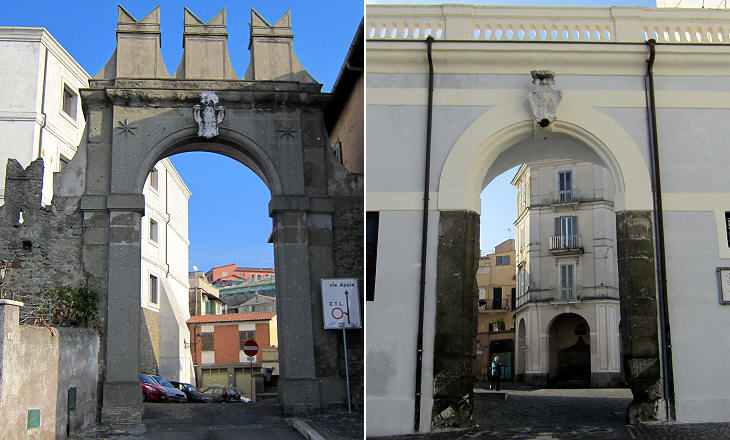 Similar to nearby Albano, Ariccia was for many centuries a fiefdom of the Savelli who in 1661 sold it to Agostino Chigi and Cardinal Flavio Chigi, nephews of Pope Alexander VII. The new owners made radical changes to the small medieval town and gave a very urban aspect to its section near Porta Napoletana. 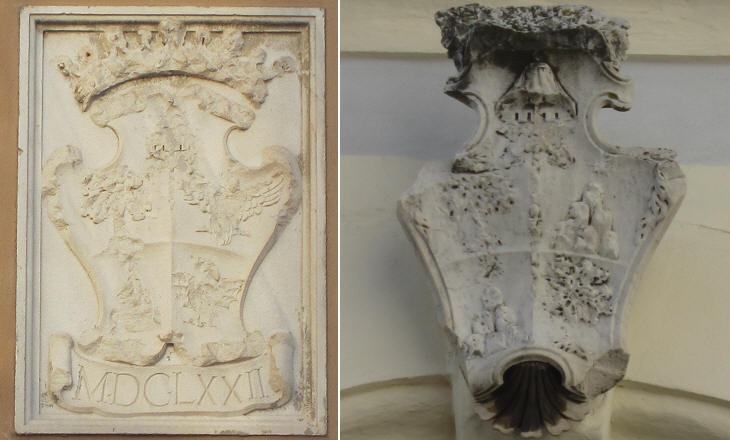 Coats of arms: (left) Agostino Chigi and his wife Maria Virginia Borghese on a 1672 building near Porta Romana; (right) Pope Alexander VII at Porta Napoletana (the image used as background for this page shows another coat of arms of the Pope inside S. Maria dell'Assunzione)

Cardinal Flavio Chigi was superintendent of the general affairs of the Papal State, an office which granted him many opportunities for enrichment; his cousin Agostino could rely on the large dowry of his wife Maria Virginia Borghese, who was the daughter of Paolo Borghese, a relative of Pope Paul V and Olimpia Aldobrandini, niece of Pope Clement VIII; in addition Maria Virginia Borghese was the stepdaughter of Camillo Pamphilj, nephew of Pope Innocent X.
In the XVIIth century the dowry of a Roman noblewoman implied such a financial effort that it could not be provided to all daughters. Agostino Chigi and Maria Virginia Borghese had eleven daughters; one of them married a nephew of Pope Clement X, while the other ten entered a nunnery.

When the Chigi became one of the most important Roman families they found out that the other great families had large villas at Frascati and Castelgandolfo and they decided that their residence at Ariccia should not be inferior to those of their rank. They asked Gian Lorenzo Bernini, assisted by Carlo Fontana, to turn the existing Savelli palace into a stately mansion (which hid the view of the large park which lay behind it). 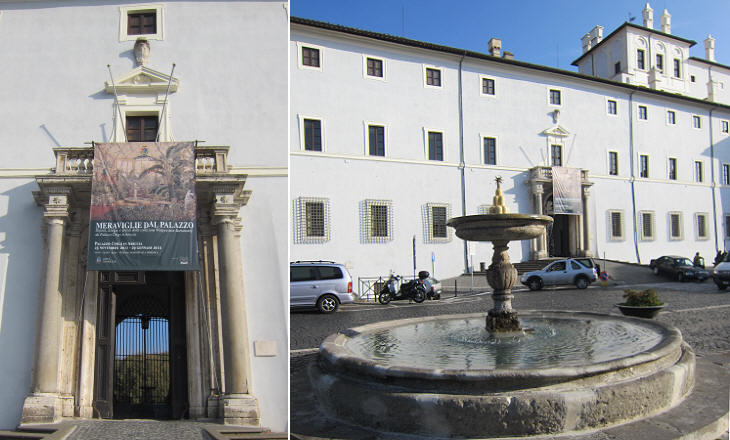 February 1787. We made a stop at the gates of a park which the owner, Prince Chigi, might be said to retain but not to maintain. Perhaps it is why he does not want anyone to look at it. It has turned into a complete wilderness - trees, shrubs, weeds, creepers grow as they like. wither, tumble down and rot. The valley of the park is enclosed by a high wall, but there is a little lattice gate through which one can peer into it and see the hill slope beyond.
J. W. Goethe - Italian Journey - Translation by W. H. Auden and Elizabeth Mayer - Collins
The size of the estate at Ariccia was such that in the XVIIIth century the Chigi preferred to build a much smaller villa along Via Nomentana within easy reach of Rome. The Chigi retained possession of the palace until 1988 when they ceded it to the City of Ariccia. The building now houses exhibitions and special events. 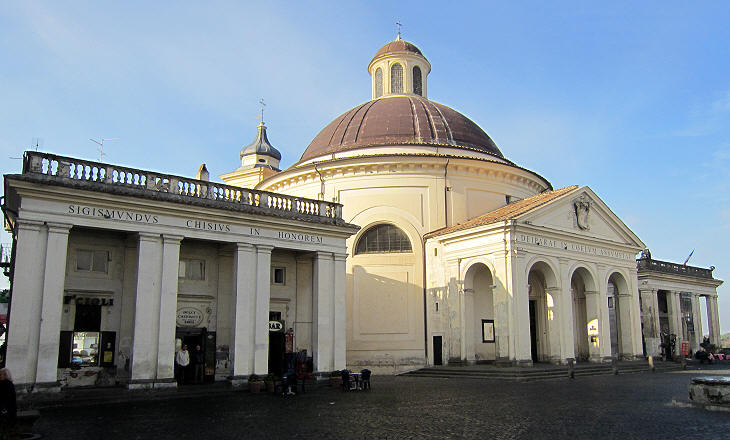 Bernini was commissioned in 1662, and two years later the church was finished. Its basic form consists of a cylinder crowned by a hemispherical dome with a broad lantern. An arched portico of pure, classical design is placed in front of the rotunda, counterbalanced at the far end by the sacristy which juts out from the circle but is not perceived by approaching visitor. Here also are the two bell-towers of which only the tops are visible from the square.
Rudolf Wittkower - Art and Architecture in Italy - 1600-1750 Penguin Books
In 1657-1662 Bernini worked at the restoration of the Pantheon and in particular of its portico which was in part occupied by small houses. Bernini cleared the ancient temple of all medieval additions which hid its original shape and he also made some sketches for an overall redesign of the area surrounding the building.
When the Chigi commissioned him the church for Ariccia he probably developed those sketches for emphasizing the Pantheon-like shape of S. Maria dell'Assunzione by adding two lateral porticoes which frame it. The inscription makes reference to a restoration made by Prince Sigismondo Chigi in 1771. 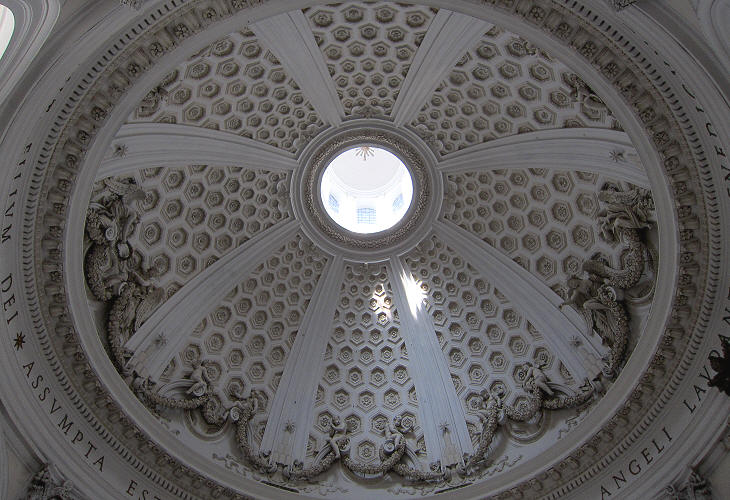 The interior too shows unexpected relations to the Pantheon. (..) In the zone of the dome, which again shows the combination of coffers and ribs. Wittkower
Most of the light in the interior of the church comes from a very large lantern which resembles the opening at the centre of the Pantheon dome. According to tradition angels threw flowers during the Assumption of Mary. The event is remembered by flower festoons and angels by Paolo Naldini; they occupy only the lower part of the dome as if Bernini did not want to divert the attention of the viewer from the stucco design of the ceiling (see a similar ceiling by Francesco Borromini). 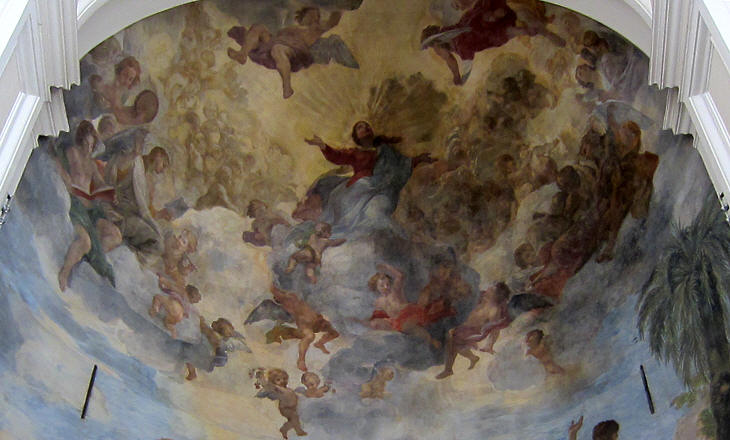 Apse painted by il Borgognone depicting the Assumption of Mary

Guillaume Courtois was a French painter from Bourgogne who spent most of his life in Rome where he was known as il Borgognone (you may wish to see the coat of arms he designed for his Roman home). Bernini commissioned him the only brightly coloured element inside the church; the fresco has some features of what is known as illusionistic painting and which reached its apex in the ceilings of il Gesù and S. Ignazio. 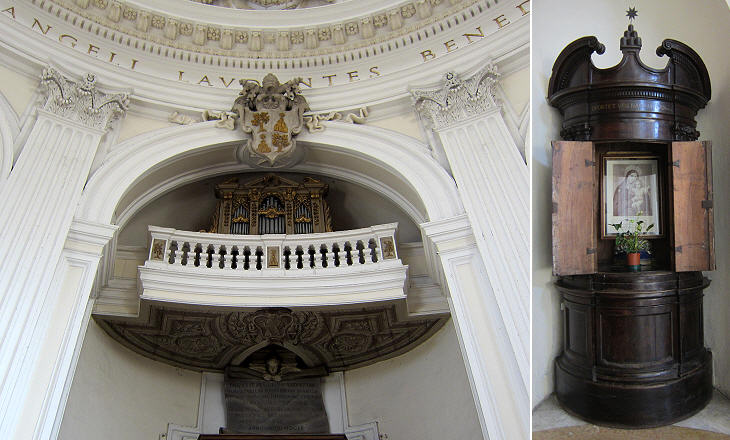 References to Pope Alexander VII and his heraldic symbols (six mountains and a star) were placed by Bernini at many points inside the church and also in the fountains between the church and the palace. The Chigi preferred to be buried in their family chapel at S. Maria del Popolo in Rome (which was redesigned by Bernini too), rather than in S. Maria dell'Assunzione. 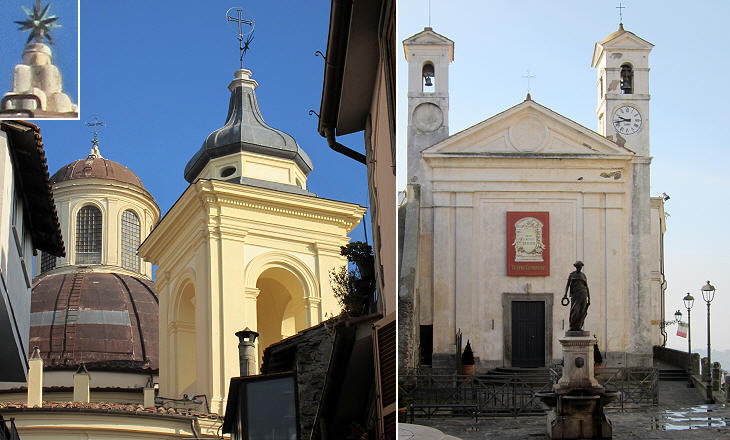 (left) Dome and one of the two bell towers; (right) S. Nicola

In 1634, at the request of Pope Urban VIII, Bernini added two small bell towers to the Pantheon to emphasize its function as a church. They were placed above the portico; it was an unfortunate addition and in the XIXth century they were pulled down. At S. Maria dell'Assunzione Bernini chose a less evident location and he built them on the back of the apse.
Luigi Bernini, brother of Gian Lorenzo, was entrusted by the Chigi with the design of some minor buildings at Ariccia, including S. Nicola. 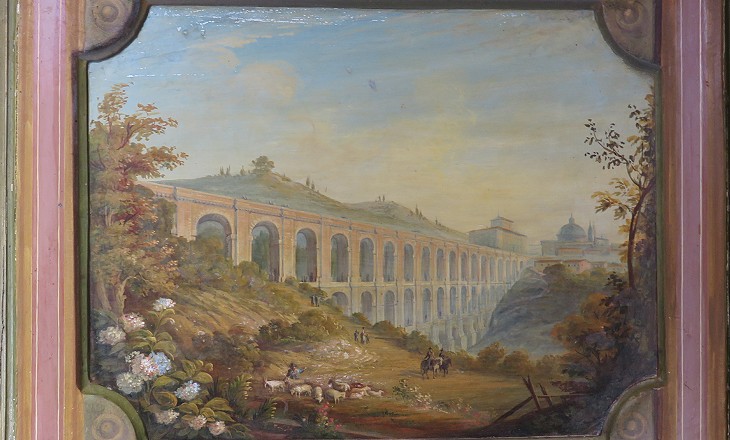 Painted cupboard in the Vatican Library showing Ariccia in ca 1860

The town is now entered from Albano by a grand viaduct, 700 feet long, whence the view is exquisitely lovely, on the left over the Campagna, on the right looking into the depths of the immemorial wood known as the Parco Chigi.
Augustus J. C. Hare - Days near Rome - 1875
In 1854 Pope Pius IX celebrated the completion of an imposing bridge which shortened the distance between Albano and Ariccia. 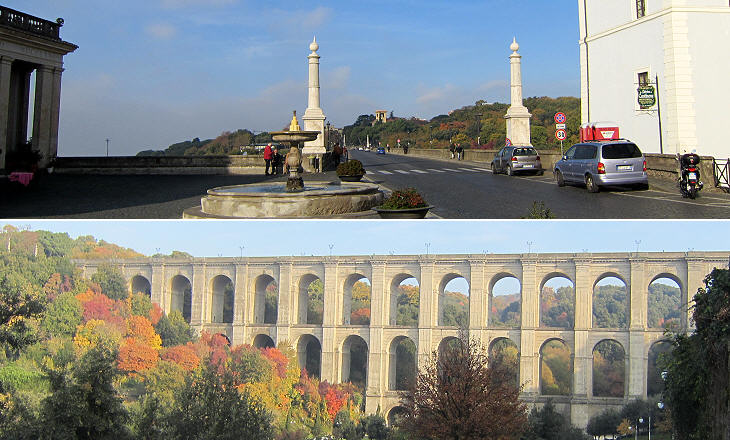 The bridge had the undesirable effect of modifying Piazza di Corte, the square between Palazzo Chigi and S. Maria dell'Assunzione, and eventually of causing traffic congestion there. Recent regulations currently forbid buses and trucks to pass across the bridge.
Ponte di Ariccia was rebuilt after having been damaged during WWII. 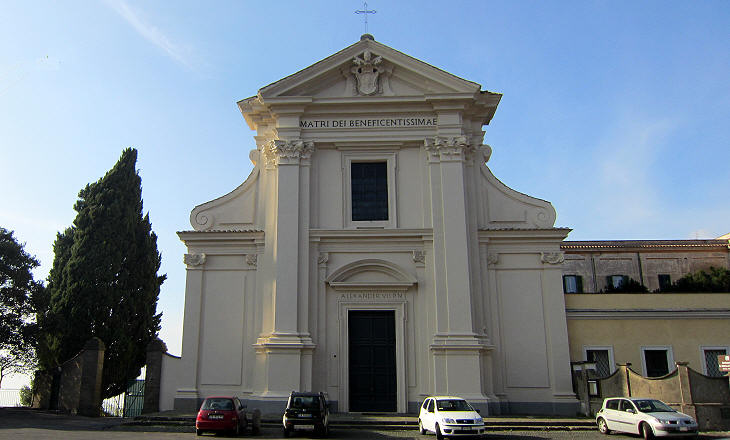 Bernini was asked by the Chigi to redesign a sanctuary (S. Maria di Galloro) outside Ariccia on the road to Genzano which housed a miraculous image of Mary. The adjoining building belongs to the Jesuits and it houses sessions of Spiritual Exercises, sets of meditations and prayers.

Next step in your tour of the Environs of Rome: Nemi