You may wish to read an introduction to the history of Venetian Crete and a page on Rettimo (Rethymno), the starting point of this excursion first.

Memories of the Venetian past of Crete can be found also outside the coastal towns. They mainly date from 1550 to 1650 the last century of Venetian rule, when the Republic implemented policies aimed at gaining, if not the support, at least the non-hostility of its Greek subjects. 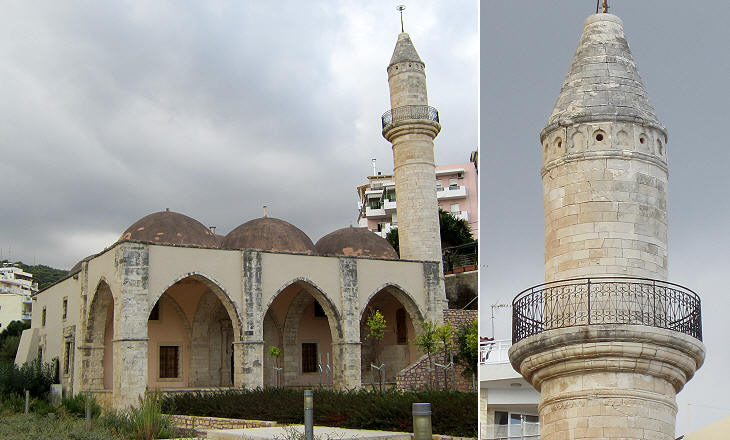 Because this page is based on an excursion from (Rethymno) it is worth mentioning a tekke, a sort of monastery outside the walls of that town along the road to Moni Arkadi; usually tekke were associated with the brotherhood of the Whirling Dervishes (you may wish to see the mausoleum of the founder of the order at Konya). The building, which currently houses a Natural History Museum, replaced a Catholic monastery dedicated to St. Onuphrius. Because the saint was a hermit, churches or monasteries dedicated to him were usually located out of town (this can be observed also at S. Onofrio in Rome). 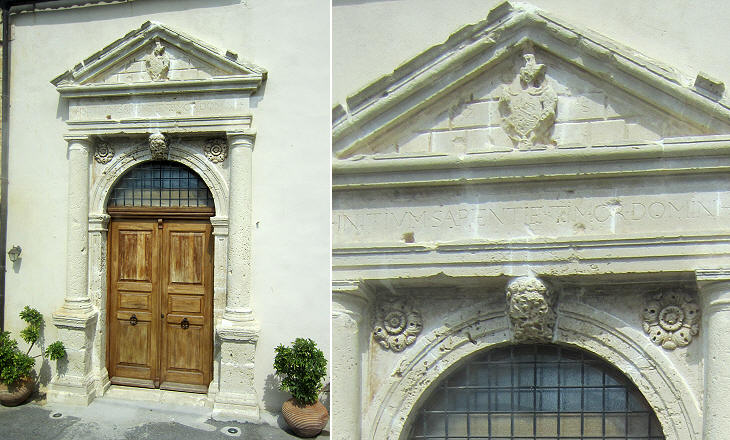 Rettimo is known for the portals which were built when the town was reconstructed after having been raided by the Ottomans in 1571. A similar portal can be found in the village of Amnatos, two miles before Moni Arkadi. The inscription is almost identical to that placed by Pope Sixtus V above the entrance to Archiginnasio della Sapienza in Rome: Initium Sapientiae Timor Domini (The Psalms 111, 10 - The fear of the Lord is the beginning of wisdom). 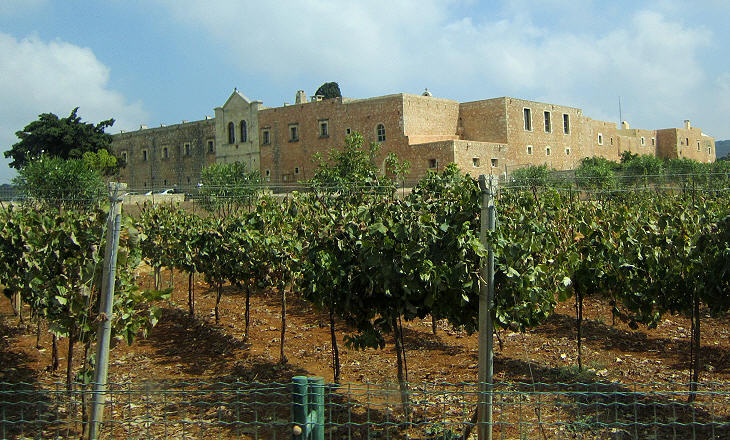 We came to a small plain between the hills about four miles in circumference, in the middle of which is the large convent of Arcadi, which was erected in the time of the Venetian government.
Richard Pococke - A Description of the East and Some Other Countries - 1745.
At the village of Ardeli we first began to realise how terrible had been the results of the last insurrection of the country (1866-1869). Every village that we passed through, and all that we could see along the hill-sides, had been plundered, gutted, and burnt; nothing but ruins met the eye; it was as if a horde of Tartars had swept over the face of the country. A few of these belonged to Mahometans, but the great majority were Christian. (..) The Convent of Arkadi, which was once regarded as the largest and richest in Crete, was at this time a mass of ruins. (..) The buildings form a single quadrangle, in the middle of which stands the church; this had been repaired, as also in some measure had the western facade of the monastery.
Henry Fanshawe Tozer - The islands of the Aegean Sea. Published 1890, but Tozer began his travels in 1874
The first image of the monastery is that of a fortified site with all the buildings arranged around a large square courtyard; the white portal which gives access to the interior was built in the late XIXth century after the 1866 events which greatly damaged some parts of the complex. 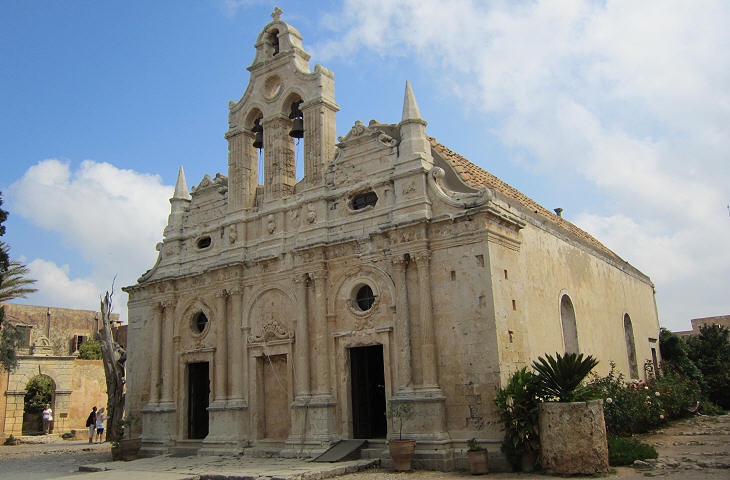 It is a handsome building, round a large court; they have a good refectory, and a very fine church in the middle of the court, with a beautiful front of Venetian architecture; the convent has a large income, above a hundred caloyers, and about twenty priests: I was received here very civilly by the abbot, and conducted to the apartments allotted for strangers; and the abbot always came and took his repasts with me. Pococke
The economic situation of the monastery was very prosperous also in 1587 when a new church was built at the site of a smaller one. At that time the monastery was benefitting from the large revenue deriving from the production of Malvasia di Candia, a sweet wine which was highly praised in western Europe. The name Malvasia derived from the Venetian port by the same name from which a sweet wine of the Peloponnese was shipped. After the Venetians lost Malvasia in the early XVIth century it was applied to other similar wines. 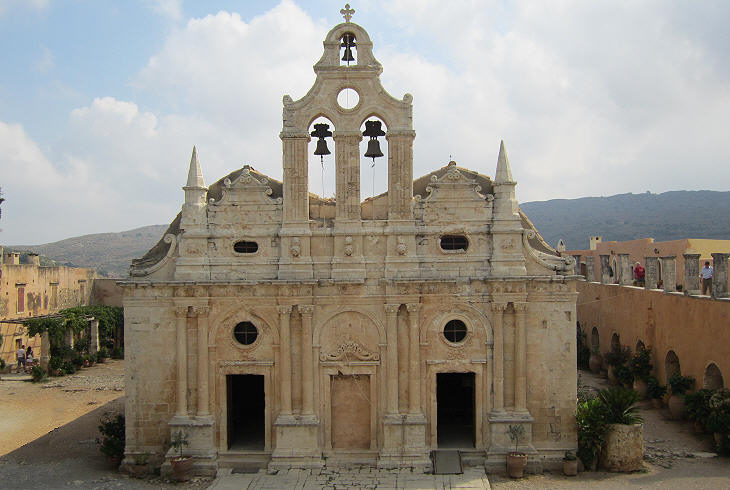 The façade seen from the upper portico of the courtyard

The elaborate façade of the church was designed by someone familiar with Italian Renaissance developments in the second half of the XVIth century. The façade does not correspond to the interior of the church which is made up of two identical prayer halls. The walled central door was designed in order to enhance the symmetry of the façade whereas the central bell tower made it more imposing. 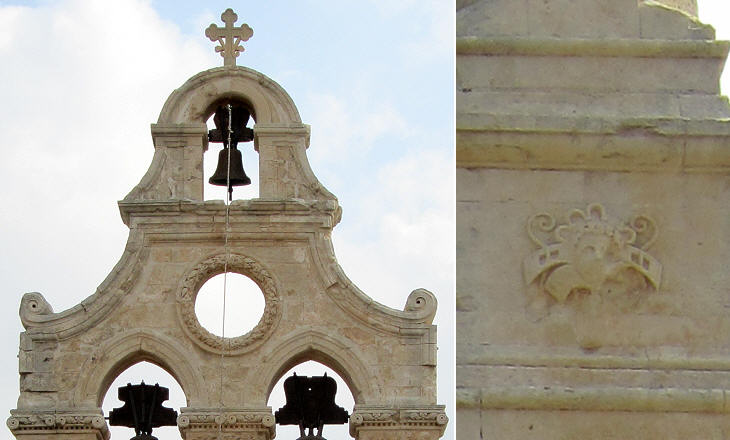 All the main churches of Rettimo were largely modified by the Ottomans after they conquered the town. We can assume that their façades had an elaborate design, as they were built at the same time as that of Moni Arkadi. One altar of the church is dedicated to the Transfiguration of Jesus, whereas the other one is dedicated to St. Helena and her son Emperor Constantine, who is revered as a saint by the Greek Orthodox Church.
Churches having twin prayer halls were not uncommon in some Venetian possessions such as Nasso; they were built to bring together Catholic and Orthodox subjects. 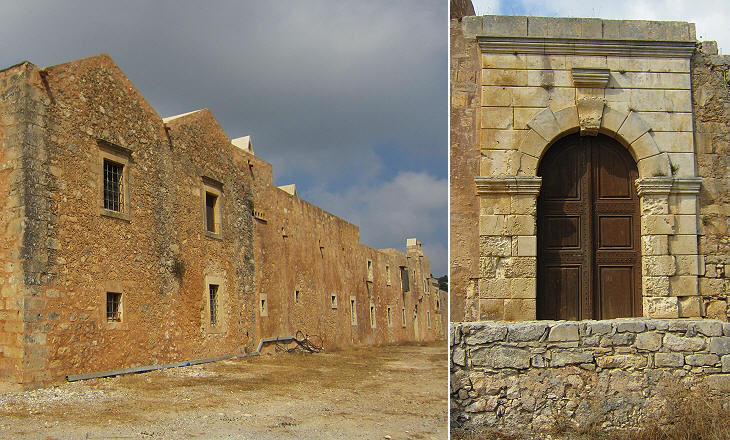 The siege of this place by the Turks, and the massacre that followed, from its tragic character, did more than anything else to attract the attention of Western Europe to the Cretan struggle. (..) The Christians who defended it had assembled there some days before, and for greater safety had brought together the women, children, and old men from the neighbouring country within the walls. The Turks approached from the side of Retimo, and at first their commander offered the defenders terms of capitulation, but these were refused, because his soldiers were irregulars, and the Christians knew from experience that they would neither obey orders, nor suffer anyone to escape. Tozer
When in 1821 the Greeks of Peloponnese rose against the Ottomans from Patras and Kalamata also the Sfakians, the inhabitants of south-western Crete, who had maintained their Greek Orthodox beliefs, rebelled. Their revolt was quelled by the intervention of Egyptian troops and the whole island was ruled by the Egyptians until 1840.
In 1866 Moni Arkadi became the centre of a rebellion of the Rettimo district. Nearly 1,000 people gathered in the monastery, which was soon surrounded by Ottoman troops. Three messengers escaped from the Candia Gate to search for help in vain. 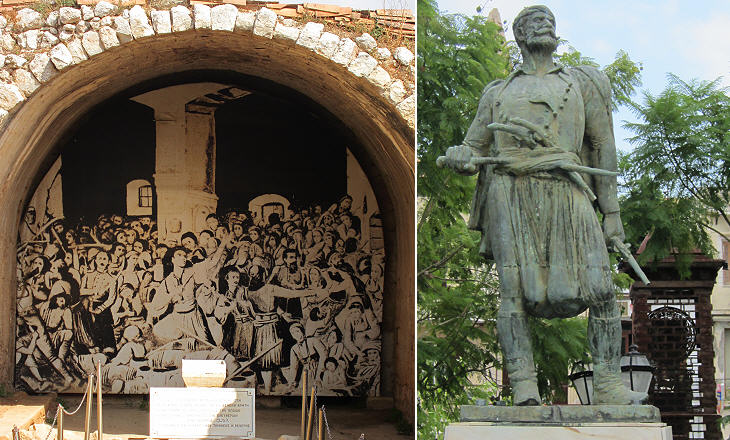 A cannon, which the besiegers had dragged hither with some difficulty, was at first planted on a neighbouring height, but as it produced but little effect on the walls, and in the meantime the attacking arties suffered greatly from the fire of the besieged, on the following day it was brought up in front of the monastery, so as to command the entrance gate, which they blew in. After a fearful struggle, they forced their way in at the point of the bayonet, and commenced an indiscriminate massacre, in which 300 souls perished. The court ran with blood, our informant said, and was so piled with bodies that it was impossible to pass from one side to the other. Simultaneously with this attack in front, another band of Turks made an assault from behind, where there was a postern; but close to it the powder magazine was situated, in a chamber over which numbers of monks and women and children were congregated together. As soon as the besiegers were close to the postern, the Christians set fire to the powder, and blew up all this part of the building, involving their friends and their enemies in common ruin. Large pieces of the shattered wall remain outside the new wall, and though most of the Turks were buried where they fell, yet the bones of others might be seen lying on the ground. In the midst of the massacre six-and-thirty Christians took refuge in the refectory, but they were pursued and all killed, and their blood still stained the walls. Tozer
The defenders withstood assaults for two days, but in the end they were unable to prevent the Ottomans from entering through a large breach in the western walls. Women and children sought refuge inside a cellar which had been turned into a powder magazine. When the first Ottoman soldiers were about to enter the building, Kostas Giaboudakis, one of the leaders of the revolt, ignited the barrels of powder causing the death of many soldiers and of about all the Greek civilians. 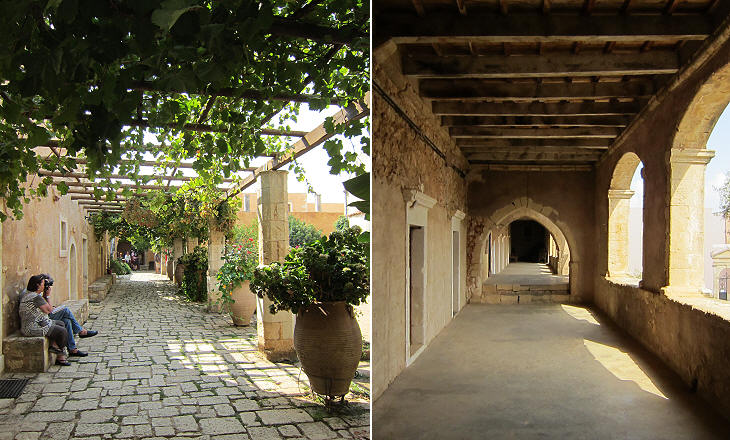 About sixty others collected together in a corridor, and begged for quarter, as having taken no part in the insurrection, and the lives of these were spared. The monastery was then fired, and many sick and helpless persons perished in the conflagration. (..) It is fair, however, to remember that this same convent was the scene of a great massacre of Mahometans by Christians at the time of the first insurrection. Barbarity is the order of the day in Cretan warfare. Tozer
In 1898 Crete acquired a semi-independent status and in 1913 it was annexed to Greece. Moni Arkadi became a memorial of the Cretan fight for freedom.