- Baelo Claudia
(left - Mosaic at Italica; right - decoration at the Alcazar of Seville) 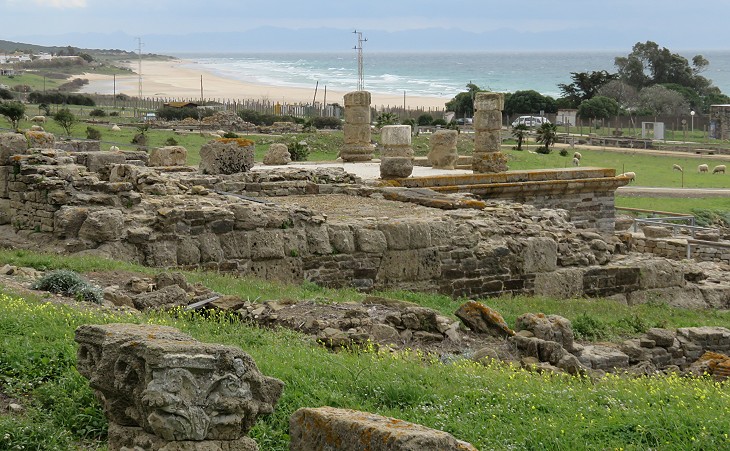 Bolonia or Villavieja (Old Town) is a very ruined site on the southern coast of Andalusia on the Atlantic Ocean, three leagues west of Tarifa and before entering the narrowest point of the Strait of Gibraltar. Don Macario Fariñas, the geographer and historian who best knows this region assumes it is ancient "Julia Traducta". (..) Bolonia retains a large section and some smaller ones of the walls of Julia and within them some other buildings, together with vestiges of an amphitheatre. Outside the walls there are tombs (..) and small parts of an aqueduct.
Summarized and translated from "Don Juan Agustin Cean-Bermudez - Sumario de las Antiguedades Romanas que hay en Espana - 1832" 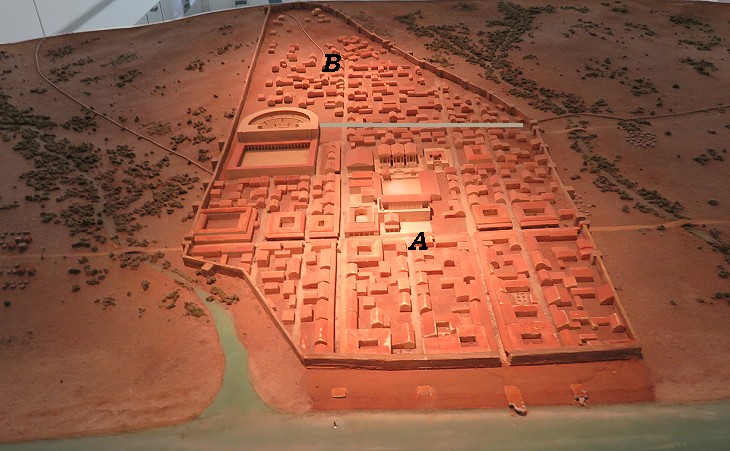 Museum of Baelo Claudia: model of the town: A) archaeological site; B) area with scanty evidence of the town

It was not until 1917 that the site was systematically excavated and associated with Baelo Claudia, a Roman town founded in the IInd century BC, but entirely redesigned at the time of Emperor Claudius. The Emperor granted it the status of municipium (town) and his name was added to that of Baelo. Although very small, it is an almost perfect example of a typical Roman town, with a square grid of streets and the main monuments at its centre. 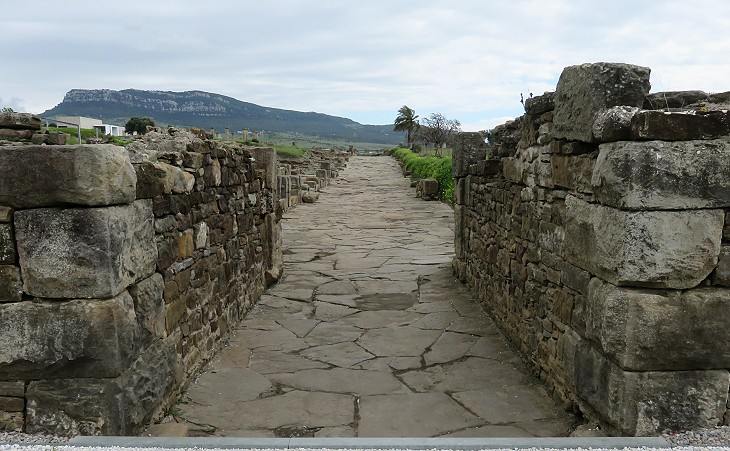 The breed of Tunnies comes from the spacious Ocean, and they travel (..) when they lust after the frenzy of mating in the spring. (..) Abundant and wondrous is the spoil for fishermen when the host of Tunnies set forth in spring. First of all the fishers mark a place in the sea which is neither too straitened under beetling banks nor too open to the winds, but has due measure of open sky and shady coverts. There first a skilful Tunny-watcher ascends a steep high hill, who remarks the various shoals, their kind and size, and informs his comrades. Then straightway all the nets are set forth in the waves like a city, and the net has its gate-warders and gates withal and inner courts. And swiftly the Tunnies speed on in line, like ranks of men marching tribe by tribe - these younger, those older, those in the mid season of their age. Without end they pour within the nets, so long as they desire and as the net can receive the throng of them; and rich and secret is the spoil.
Oppian, a IInd century AD Greco-Roman poet - Halieutica (Fishing) - translation by A. W. Mair
The economy of Baelo, similar to those of Lixus, Tangier and other towns on the Moroccan side of the Strait of Gibraltar was based on tuna fishing. 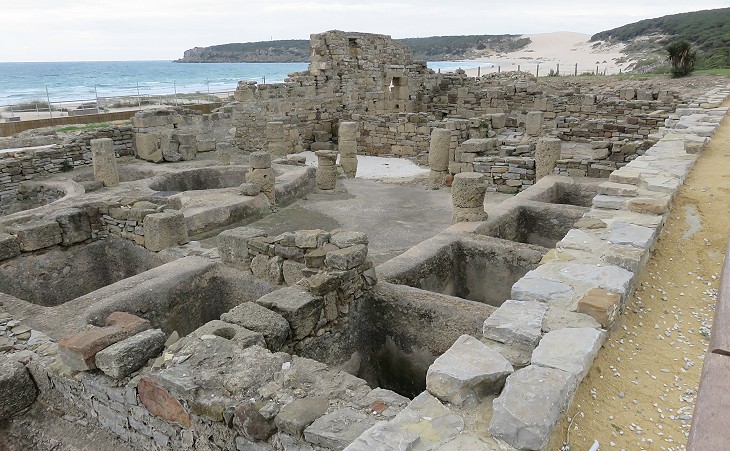 The inhabitants of Turdetania (today's Andalusia) build up their ships there out of native timber; and they have salt quarries in their country, and not a few streams of salt water; and not unimportant, either, is the fish-salting industry that is carried on, not only from this country, but also from the rest of the seaboard outside the Pillars; and the product is not inferior to that of the Pontus.
Strabo - The Geography - Book III:2 - translation by H. L. Jones
Garum was a fish sauce which was highly praised by the Romans. The best garum was made from the viscera of tuna, together with the blood, juices, and gills, salted and allowed to ferment for two months. Wine, herbs, and spices also could be added.
Baelo is unique in having its garum facility within the town, because these were usually located at a distance from it, so offensive was the smell. A well preserved garum factory can be seen at Neapolis in Tunisia. 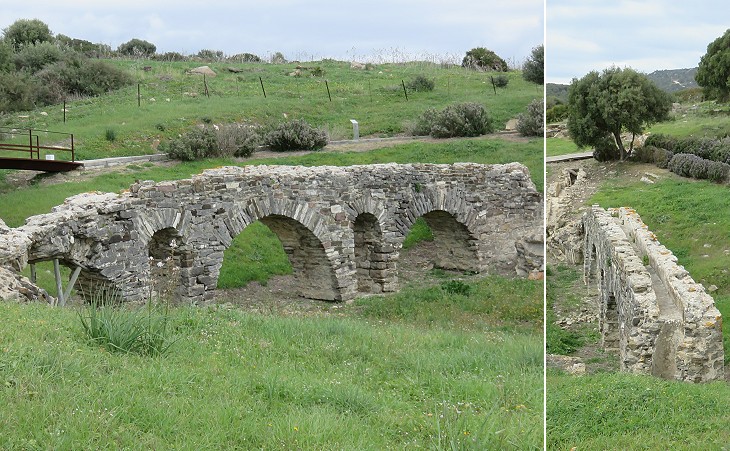 Garum production tended to be situated at the mouth of rivers as at Lixus, which provided fresh water for cleaning and brining. Baelo had three aqueducts; their number suggests that they were required by the garum factory, rather than by the size of the population. 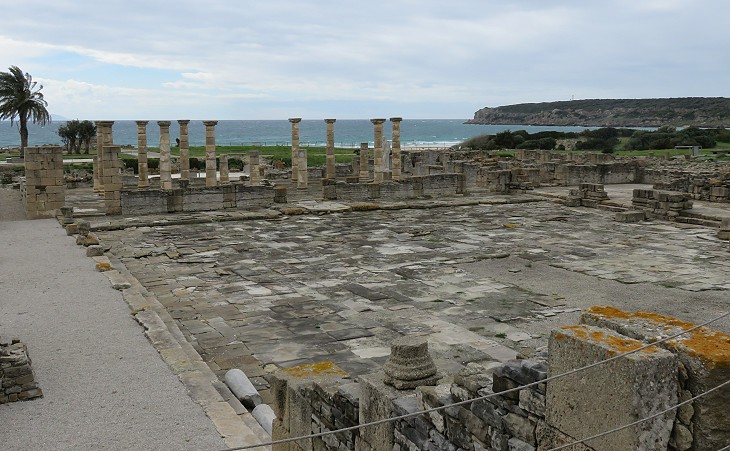 Square of the Forum

Although the Forum of Baelo must date back to the time of Emperor Augustus, its current aspect is the result of a redesign in the second half of the Ist century. It is situated at the very centre of the town; it had porticoes along the short east and west sides and it gave access to the basilica to its south and to the Capitolium to its north. We can assume it housed a number of statues of emperors or local benefactors. The pedestal of one of them was found in 1966; its inscription confirmed the opinion that the ruins were those of Baelo and that the settlement had the status of municipium. 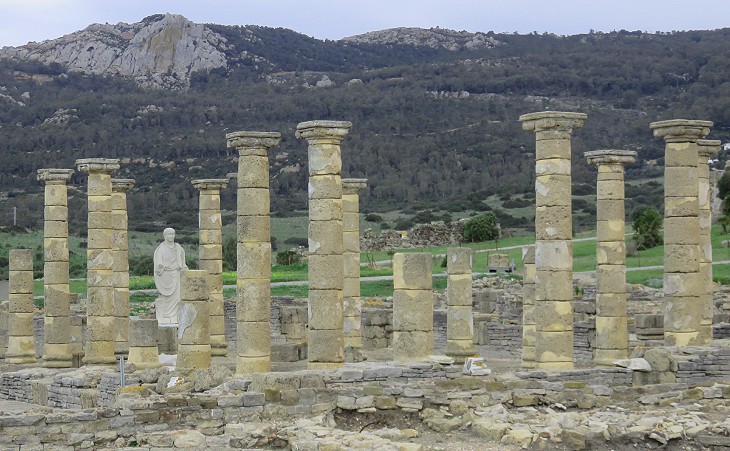 Initially a basilica was a building of a Roman Forum where the same activities which occurred in the square, including the selling of goods, were carried out indoors. Eventually it acquired a more specific purpose and it housed the tribunal and other offices of the town. The basilica of Baelo reflects this development. It had two storeys, of which only the Ionic columns of the lower one have been reconstructed. The column shaft sections were found one beside the other, which suggests they collapsed because of an earthquake in the IIIrd century AD. 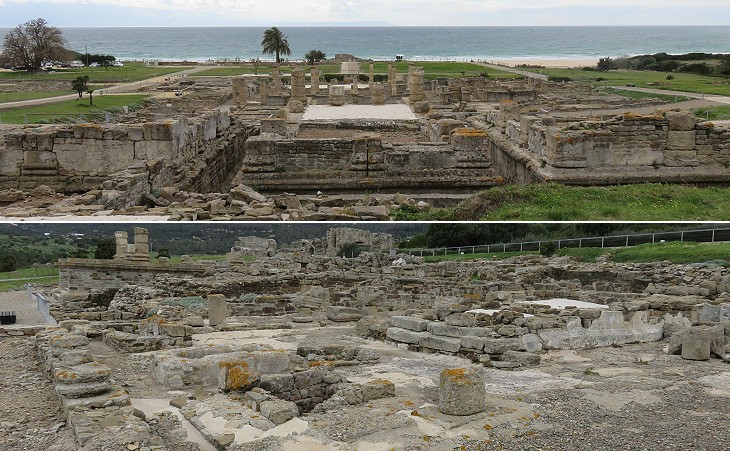 A Capitolium was a must for a provincial settlement which had acquired the status of town. At Baelo it consisted of three adjoining temples dedicated to Jupiter, Juno and Minerva, the deities who were worshipped on the Capitol Hill of Rome and were regarded as a symbol of the city (see a relief on the Arch to Trajan at Benevento). Usually a Capitolium was a single building with three cellae, as at Thugga, but at Baelo (and at Sufetula in Tunisia, where the temples are in better condition) each god had a temple. The Capitolium was mainly used for ceremonies in honour of the Emperors or celebrating events of the history of Rome.
An adjoining temple to Isis had more to do with actual worship and reliance on divine protection; the Egyptian goddess was regarded as the patroness of seafarers and this explains why the temple was in such an important location, although in other towns, as at Sabratha in Libya, it stood by the sea where boat ceremonies were held in honour of the goddess. 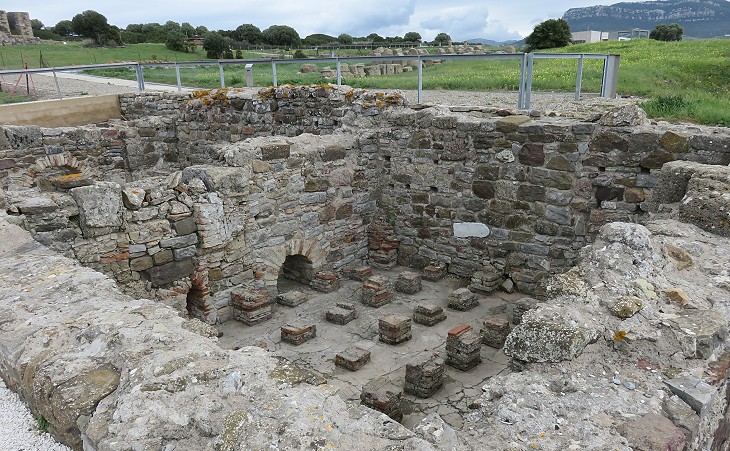 It is possible that the main thermal baths of the town have not yet been discovered and still lay under a large coastal dune to the west of the archaeological site. Those which can currently be seen probably constitute a small semi-public enclosure for thermal baths, belonging to a private residence, that perhaps were used by a group of wealthy families. 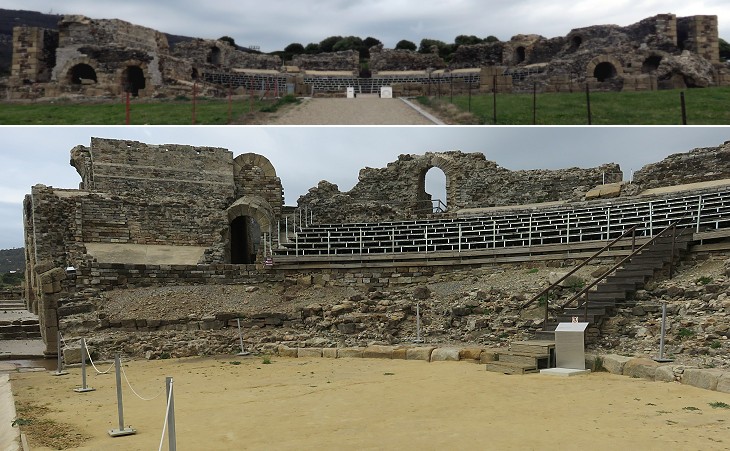 The theatre was built when the layout of the town was redesigned. It does not appear that it was modified in order to house gladiatorial combats or venationes (fights with beasts). This suggests that it was no longer in use in the late IIIrd century when many theatres were turned into amphitheatres. It was eventually used as a necropolis. It has vomitoria, internal stairs and vaulted passages which allowed the audience to easily reach their seats. 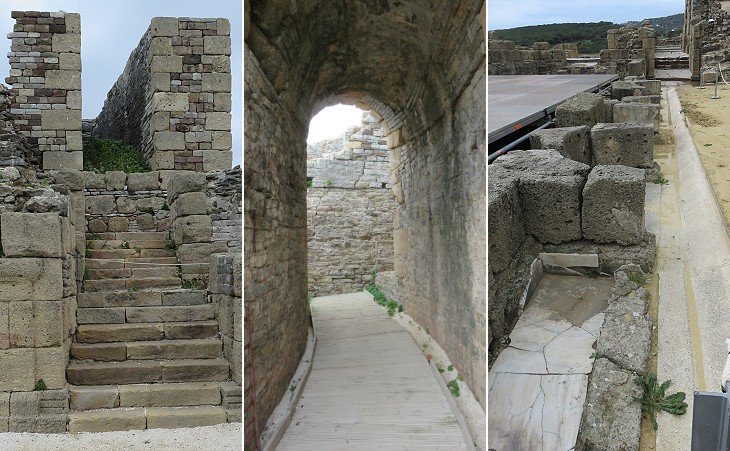 Baelo declined in the IIIrd century because of an earthquake and for the chaotic situation in the Empire which hindered trade, in particular of garum, a luxury good. The lack of early Christian monuments and of records about bishops of Baelo suggest that by the Vth century the town was down to a hamlet of fishermen and it was most likely completely abandoned before the Arab invasion in 711. 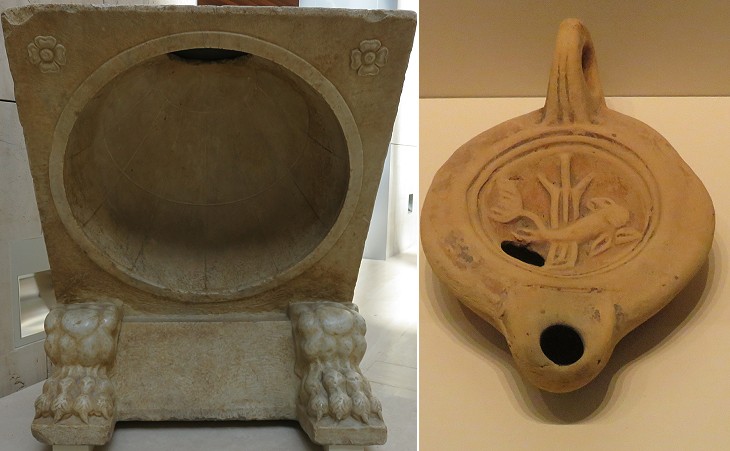 Exhibits from Baelo at the National Archaeological Museum of Madrid: (left) sundial (see a similar one at Pompeii); (right) oil lamp

Systematic excavations of Baelo were carried out in 1917-1921 by Piere Paris, a French archaeologist, and by George Edward Bonsor, a French-born English painter who had unearthed the necropolis of Carmona in 1882-1886. A beautiful example of a sundial was found by Paris. A sunbeam penetrated into the sphere from a hole and it touched lines which indicated the hour of the day and other astronomical data (see the same system at Meridiana di S. Maria degli Angeli in Rome). It was sent to the National Archaeological Museum of Madrid together with other early findings at Baelo. 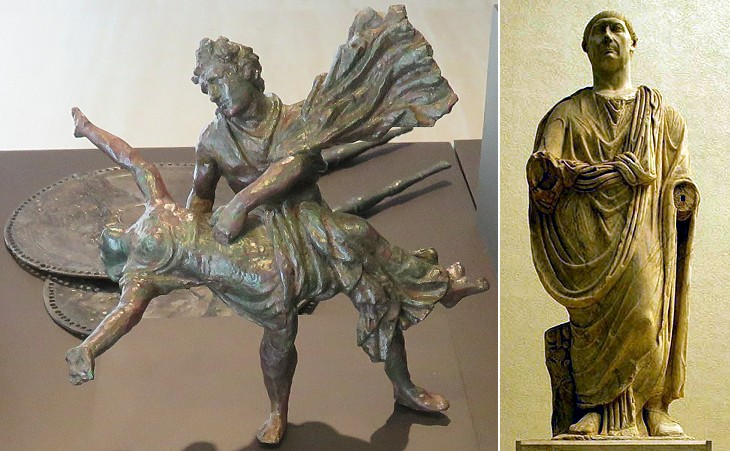 Exhibits from Baelo: (left) Rape of Proserpina at the National Archaeological Museum of Madrid (you may wish to compare it with the statue by Gian Lorenzo Bernini); (right) statue of Trajan at the Museum of Cadiz

The findings of excavations in the 1960s were sent to the Museum of Cadiz which has a small archaeological section. Eventually in the 1990s the authorities of Andalusia decided to upgrade the facilities at Baelo. They built a small museum to house the most recent findings and casts of the most important ones which are in Madrid. The decision was due to the great development of seaside resorts near Baelo and the consequent increase of the number of potential visitors. 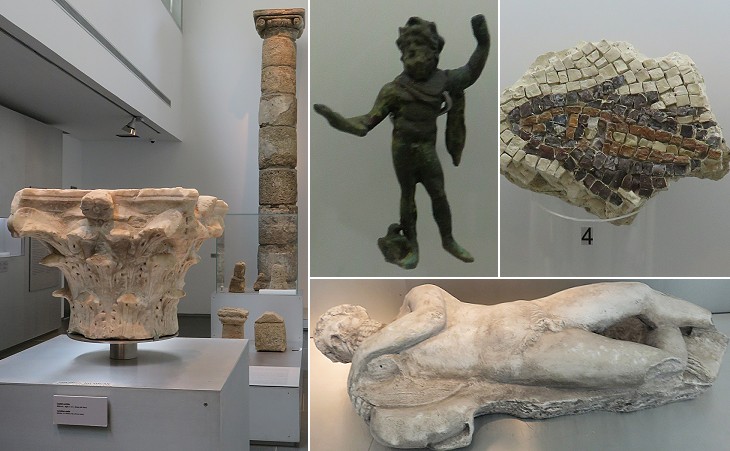 Other exhibits at the Museum of Baelo; the image used as background for this page shows a fragment of a colossal foot

Return to the introductory page.