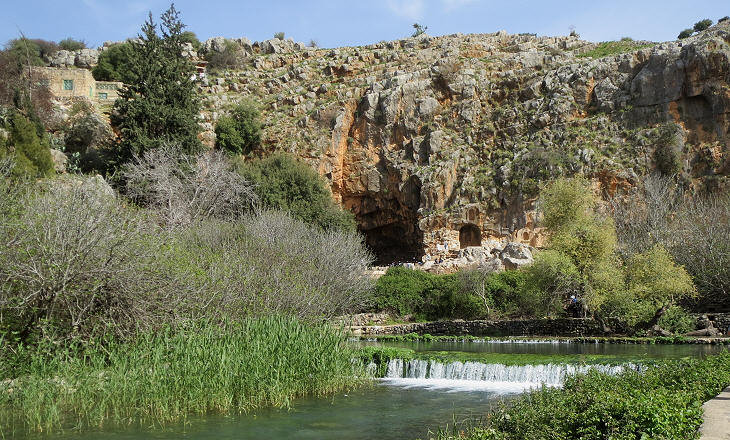 And as the evening drew near, we clambered down the mountain (from the castle), through groves of the Biblical oaks of Bashan, (for we were just stepping over the border and entering the long-sought Holy Land,) and at its extreme foot, toward the wide valley, we entered this little execrable (unpleasant) village of Banias and camped in a great grove of olive trees near a torrent of sparkling water whose banks are arrayed in fig-trees, pomegranates and oleanders in full leaf. Barring the proximity of the village, it is a sort of paradise.
M. Twain - The Innocents Abroad - 1869. 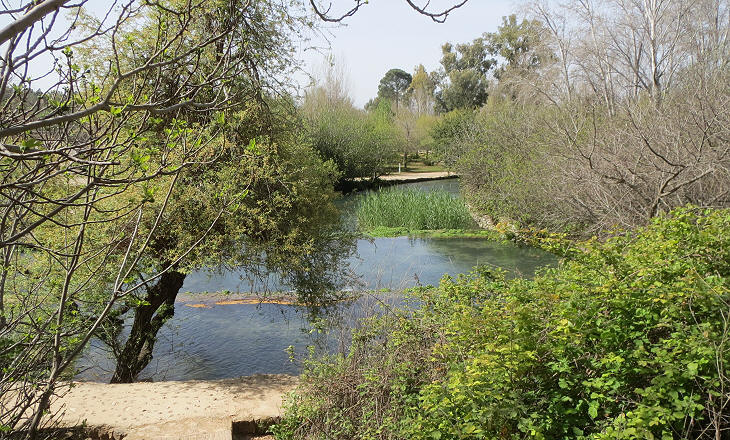 The very first thing one feels like doing when he gets into camp, all burning up and dusty, is to hunt up a bath. We followed the stream up to where it gushes out of the mountain side, three hundred yards from the tents, and took a bath that was so icy that if I did not know this was the main source of the sacred river, I would expect harm to come of it.
M. Twain. 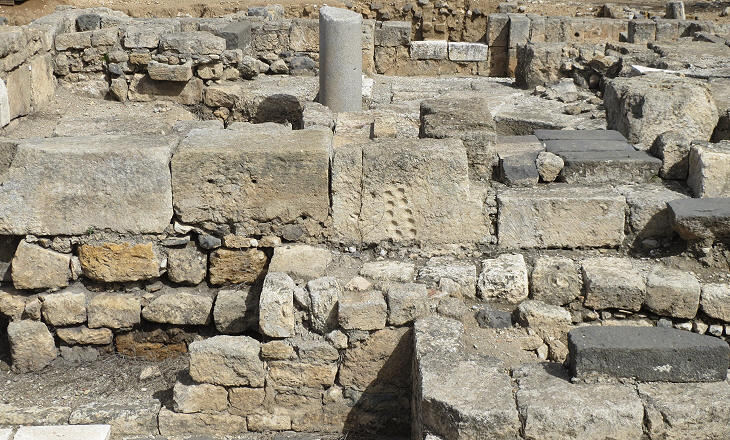 The ruins here are not very interesting. There are the massive walls of a great square building that was once the citadel; there are many ponderous old arches that are so smothered with debris that they barely project above the ground. (..) But trees and bushes grow above many of these ruins now; the miserable huts of a little crew of filthy Arabs are perched upon the broken masonry of antiquity, the whole place has a sleepy, stupid, rural look about it, and one can hardly bring himself to believe that a busy, substantially built city once existed here, even two thousand years ago.

The ruins described by Twain were those of Caesarea Philippi, a town which flourished after 4 BC when it became the capital of a small state ruled by Philip, one of the sons of King Herod of Judaea. It was named Caesarea in honour of Julius Caesar and of Rome with the addition of Philippi to distinguish it from Caesarea (Maritima), the residence of the Roman governor of the region, and from other towns by the same name, such as today's Kayseri in Turkey.
Because of a famous shrine to Pan the town was also known as Paneas, hence today's Banias. 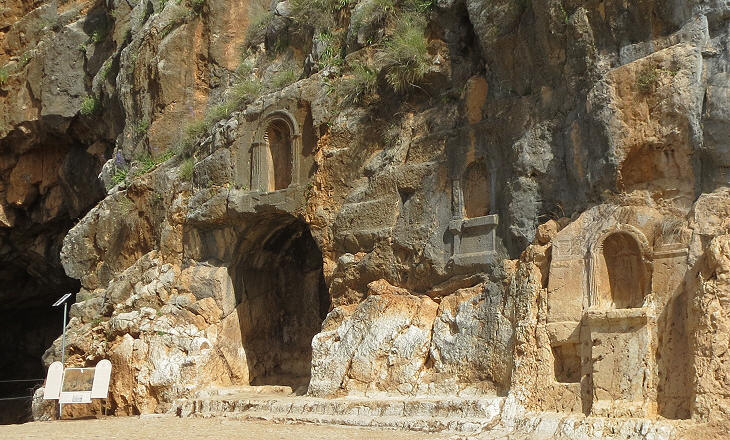 Shrine to Pan and niches which housed statues of gods

Up yonder in the precipice where the fountain gushes out, are well-worn Greek inscriptions over niches in the rock where in ancient times the Greeks, and after them the Romans, worshipped the sylvan god Pan. M. Twain.
Pan loved nothing better than his afternoon sleep and he took revenge on those who disturbed him with a terrifying loud shout (that's why we call panic a state of terror); in summer he slept in a cave and shrines dedicated to him had the shape of the entrance to a cave (you may wish to see that found at Thassos). 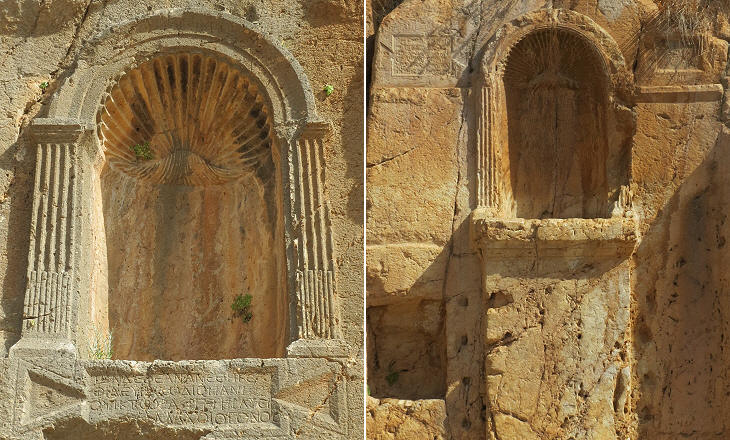 Niches of the Shrine to Pan

The inscription under the main niche is dated year 150 from Pompey's entry at Paneas in 63 BC. It reads: "Dedicates to Pan, son of Diopan (the lover of tunes) who loves Ekho (a nymph) - (by) The priest Victor, son of Lysimachus". All inscriptions are written in Greek, but are placed in a typical Roman frame.
The shrine was built next to an actual cave the depth of which, according to Flavius Josephus, a historian of Jewish origin, could not be measured. 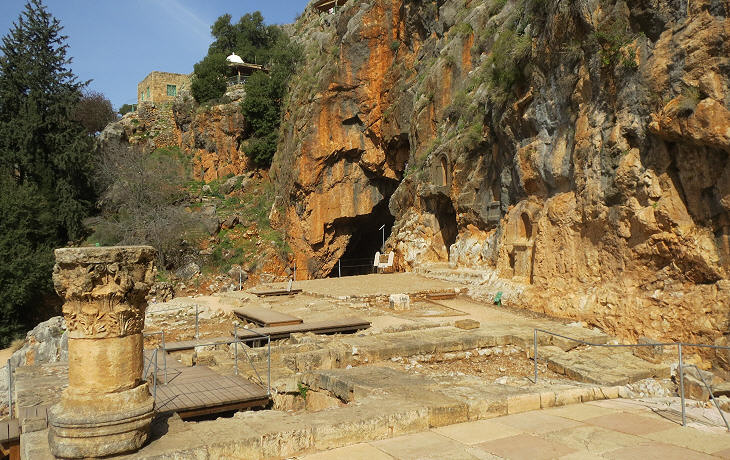 Esplanade of the temples: in the foreground a capital from the Temple to Zeus built by Emperor Trajan

Other more traditional temples were built to the sides of the Shrine to Pan. One was dedicated to Emperor Augustus by King Herod. Another one was dedicated to Zeus by Emperor Trajan. In 178, at the time of Emperor Marcus Aurelius, a small courtyard was dedicated to Nemesis, goddess of divine justice. In 220 Emperor Heliogabalus, of Syrian origin, promoted the construction of a temple dedicated to the Dancing Goats of Pan. 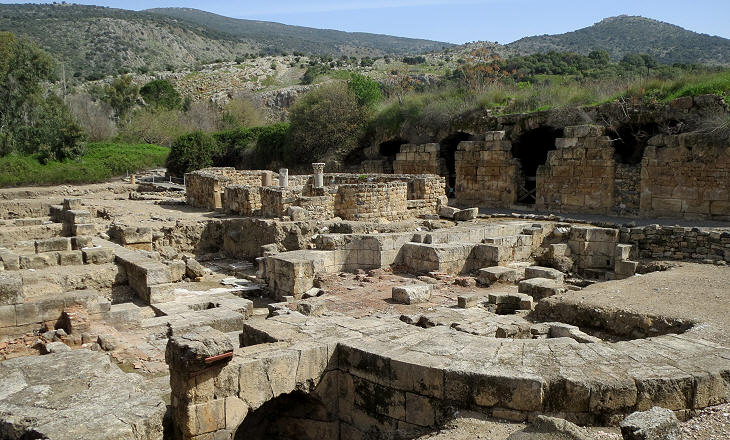 Herod owed his kingdom to the Romans and in particular to Mark Antony, who supported his cause with the Senate. Herod swiftly shifted his allegiance to Augustus after the defeat and death of Antony. In order to strengthen his position he named one of his sons Agrippa in honour of Marcus Vipsanius Agrippa, son-in-law of Augustus and his assumed heir.
The Romans gradually deposed the sons of Herod from their mini-kingdoms, but some of them were granted roles as governors of towns and territories in the frame of the Roman Empire. Agrippa II, grandson of Herod, was for some time the de-facto ruler of a territory larger than that of his grandfather. He built a large palace, warehouses and baths at Caesarea Philippi. 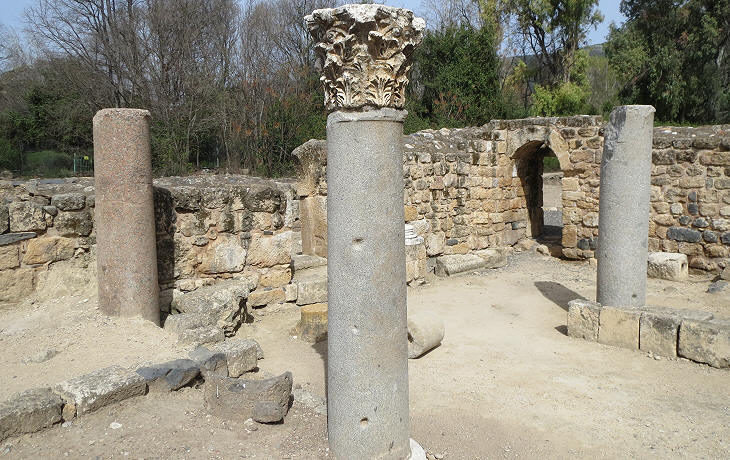 The incorrigible pilgrims have come in with their pockets full of specimens broken from the ruins. I wish this vandalism could be stopped. They broke off fragments from Noah's tomb; from the exquisite sculptures of the temples of Baalbec; from the houses of Judas and Ananias, in Damascus; from the tomb of Nimrod the Mighty Hunter in Jonesborough; from the worn Greek and Roman inscriptions set in the hoary walls of the Castle of Banias; and now they have been hacking and chipping these old arches. Heaven protect the Sepulchre when this tribe invades Jerusalem! M. Twain. 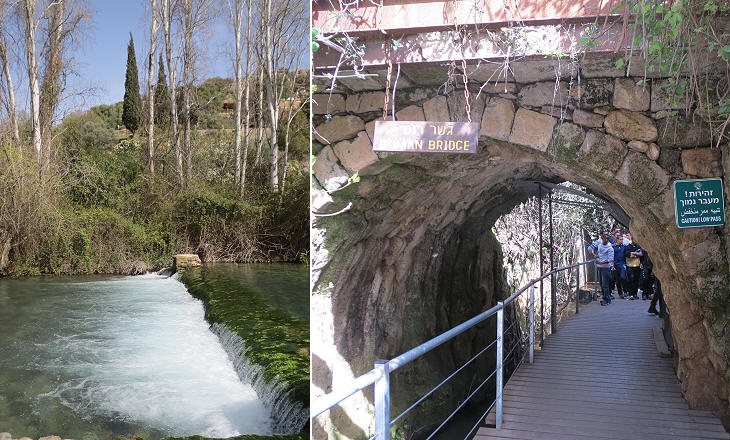 There are heavy-walled sewers through which the crystal brook of which Jordan is born still runs; (..) there is a quaint old stone bridge that was here before Herod's time, may be; scattered every where, in the paths and in the woods, are Corinthian capitals, broken porphyry pillars, and little fragments of sculpture. M. Twain.
After the Muslim conquest in the VIIth century Caesarea Philippi declined and it gradually became a minor village, notwithstanding its strategic position. It was part of Syria until 1967. The temples and the springs are now managed by the Israel Nature and Parks Authority.
The image used as background for this page shows a detail of one of the niches.