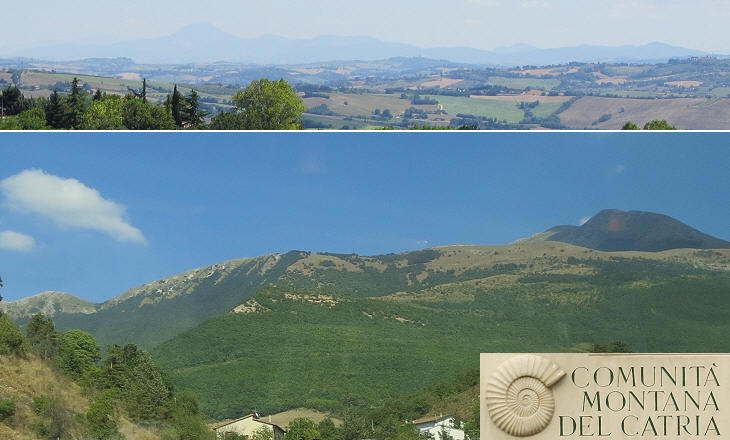 South of the mountainous region of Montefeltro, the Apennines range slopes towards the Adriatic Sea in a very smooth way so that Mt. Catria (1,702 m/5,584 ft), which is situated between Umbria and the Marches, is visible from the coast. In antiquity high mountains visible from afar were often regarded as holy sites (e.g. Mt. Olympus) and that occurred to Mt. Capria too. Another reason for its holiness resided in the fossils of marine invertebrate animals which often were found by breaking stones in the area. Today we know they indicate that the rocks of Mt. Catria lay on a seabed in the Mesozoic Era (from 250 to 60 million years ago), but for the ancient inhabitants of the region they were of supernatural origin. 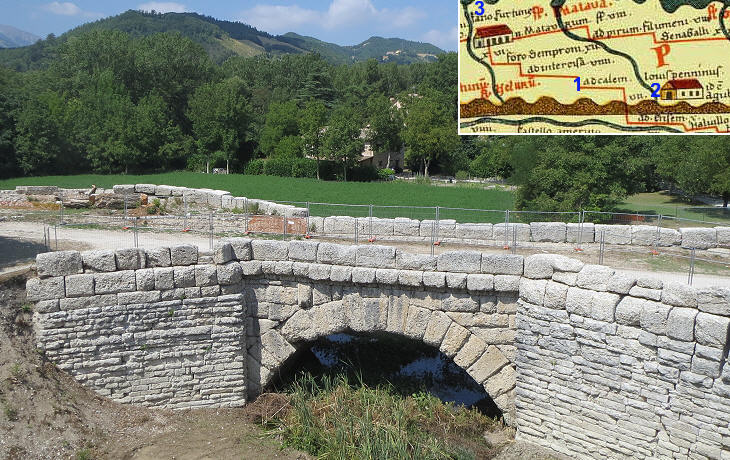 Ponte Mallio, named after a nearby inscription quoting a Marcus Allius, which perhaps is unrelated to the bridge; (inset) section of "Tabula Peutingeriana", a Vth century AD map of the roads of the Roman Empire, showing 1) Cales (Cagli); 2) Temple to Jupiter Penninus; 3) Fano. 1) and 3) were situated along Via Flaminia

A temple to Jupiter Penninus is mentioned by Pliny the Elder and it is shown in a Vth century map, at a time when the Christian faith was already compulsory. In the IIIrd century BC, the Romans established their first colonies on the Adriatic Sea and opened a road from Rome to Ariminum (Rimini) to facilitate military and economic penetration in the region. Via Flaminia, named after the consul who built it, crossed the Apennines at a narrow gorge between two peaks of Mt. Catria.
At the end of this difficult section of their journey, ancient travellers had a rest at Cales, a settlement founded by local tribes, which became a flourishing Roman municipium, a town with some form of self-government. Of its Roman past Cagli retains only a bridge over the small stream which flows through the gorge across the mountains. This because the town was abandoned during the Early Middle Ages and its inhabitants rebuilt it in a more secure position on the slope of a nearby mountain. 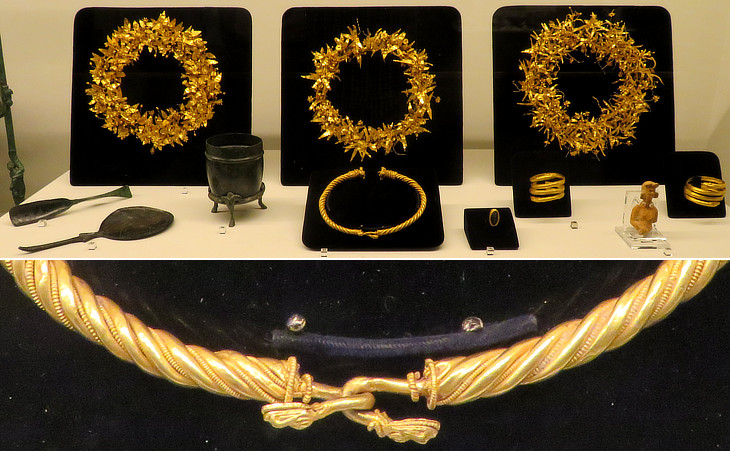 Archaeological Museum of Ancona: jewels (below a detail of the torque) from Montefortino d'Arcevia (IIIrd century BC)

At the end of the XIXth century a necropolis was discovered at Montefortino d'Arcevia, east of Cagli and west of Jesi. The tombs of some women contained precious jewels, probably from Greece or Greek colonies in Southern Italy. They show that prior to the Roman conquest the locals had already established trade links with Greece and their economy was developed enough to allow the purchase of luxury items. The torc, a necklace amulet, however is more typical of the Celts, see a torc at Toulouse and that of the Dying Galatian.

Archaeological Museum of Ancona: IInd century BC teracotta relief depicting a fight between Greeks and Galatians probably symbolizing Romans and Celts from a temple at Civitalba near Montefortino d'Arcevia

In 1896 evidence of a Roman town was identified near Arcevia and a number of small terracotta statues and decorative friezes were discovered in a farmed field. They were assembled in the local parish church and some of them fit together to form scenes which most likely decorated a temple. 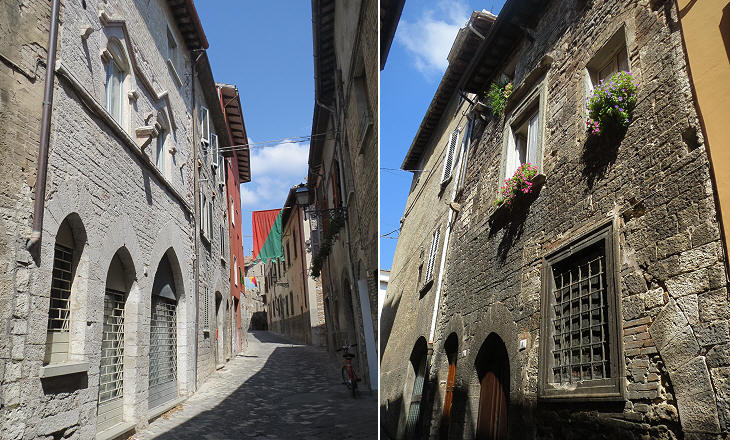 Medieval houses near S. Francesco (left) and the Cathedral (right)

In the XIth century Cagli became a Comune, an almost independent city-state. Its control over Via Flaminia was challenged by Gubbio and the two towns were often at war. In addition to conflicts among them, almost all Italian comuni had to deal with internal strife. The factions were labelled as Guelfi, supporters of the Pope, and Ghibellini, supporters of the German Emperor, but they fought for their own local interest. In 1287 during one of these internal conflicts an uncontrolled fire almost destroyed the entire town. Cagli was a diocese and Cardinal Berardo Berardi promoted the reconstruction of his hometown on a new site, a terrace protected by two ravines and nearer to Via Flaminia. For this reason Cagli does not have many medieval buildings, but those it has are very similar to those of Gubbio, including the presence of Porta del Morto, a narrow door adjoining a larger one. 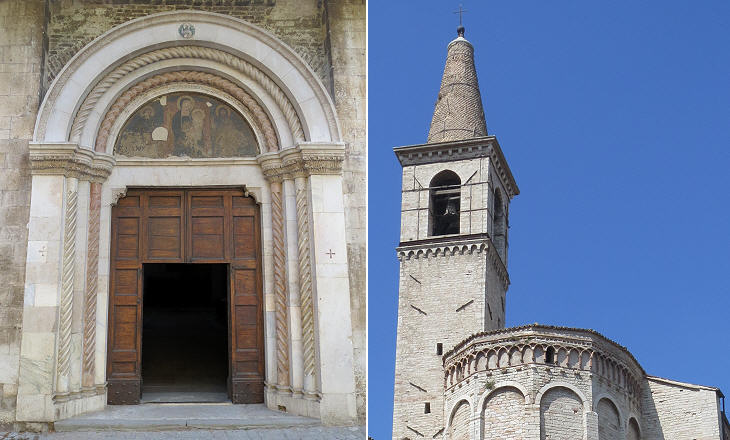 New Cagli was built around an already existing church dedicated to St. Francis of Assisi, one of the earliest Franciscan churches in the region (1234). The portal was added in 1348. It is not a Gothic portal as many others are in nearby towns (e.g. Pesaro), but it recalls that which had been just completed at Palazzo dei Consoli in Gubbio. 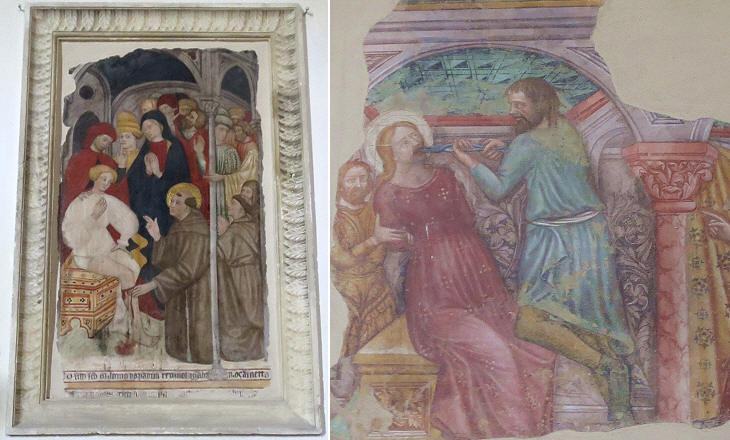 The churches of Cagli retain many interesting frescoes depicting miracles or martyrdoms. They provide information on the clothes people wore (Cagli had wool factories) and in the case of the martyrdom of St. Apollonia on how XVth century dentists pulled out teeth. St. Apollonia is a IIIrd century martyr from Alexandria; according to tradition she received such violent blows on her face that she lost all her teeth. She is the patron of dentists and of those who suffer from toothache. 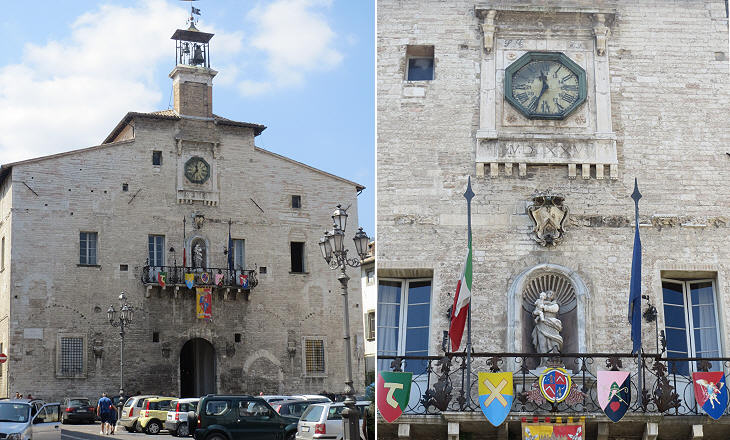 Palazzo Pubblico (Town Hall): (left) façade; (right) details; the four escutcheons on the balcony are the symbols of the quarters of Cagli

According to tradition the layout of new Cagli was designed by Arnolfo di Cambio, a great Florentine sculptor and architect (you may wish to see his Monument to Cardinal Guillaume de Braye at Orvieto). Four parallel streets cross the whole town. A large central rectangular square houses Palazzo Pubblico and the Cathedral. The former is a huge building with a rather plain façade to which were added a clock in 1575 and a statue in 1680. The Cathedral is situated in a corner of the square and it was almost entirely rebuilt in the XVIIth/XVIIIth centuries. 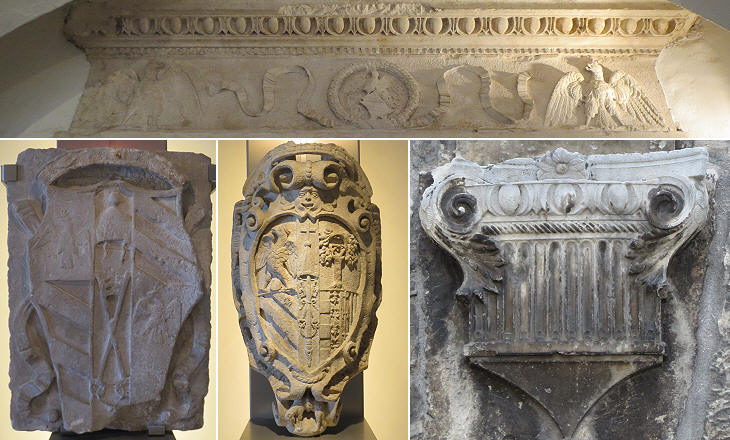 In 1376 the inhabitants of Cagli peacefully accepted to be ruled by the da Montefeltro, who already controlled Urbino and other towns and castles. In 1476 they offered Palazzo Pubblico to Federico da Montefeltro, who asked Francesco di Giorgio Martini, the court architect, to develop a project for turning the building into a palace for his (Federicos) own use. Eventually radical changes were not made, although some capitals on the façade indicate that the architect had in mind to open a large loggia there. 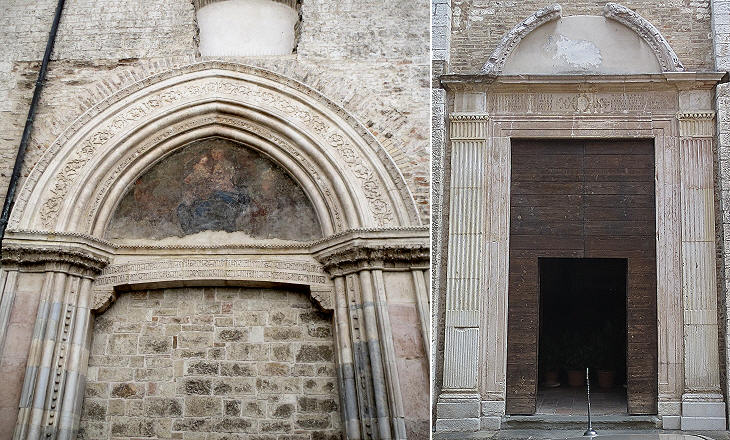 (left) Side portal of the Cathedral; (right) portal of S. Domenico

The side portal of the Cathedral was designed in 1424 in a rather traditional way. The portal of S. Domenico is dated 1483 and its shape is entirely different. It shows the impact of the Renaissance frames of portals and windows designed by Luciano Laurana and Francesco di Giorgo Martini for the palaces of the da Montefeltro (see those in Gubbio and Pesaro). 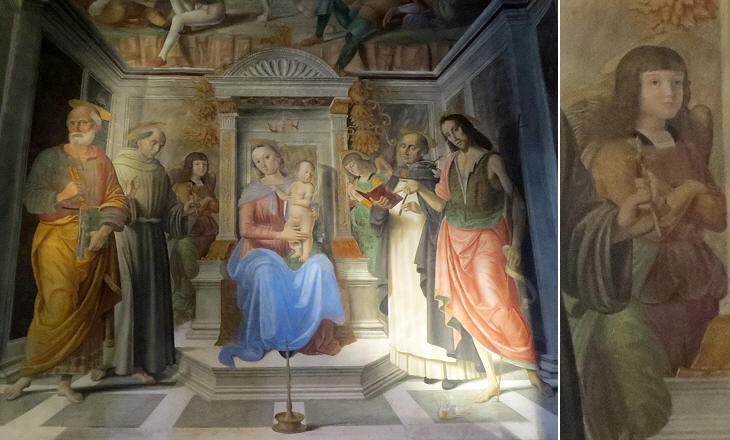 S. Domenico: altar of Cappella Tiranni by Giovanni Santi (ca 1490) and an enlargement showing one of the two angels, thought to portray Raphael

Giovanni Santi was court painter to Federico and Guidobaldo da Montefeltro and his fresco in Cappella Tiranni is regarded as his masterpiece. The interest for the painting is increased by the fact that Giovanni Santi was the father of Raphael and that it is believed he portrayed his son (aged seven) as one of the angels and himself as St. John the Baptist. 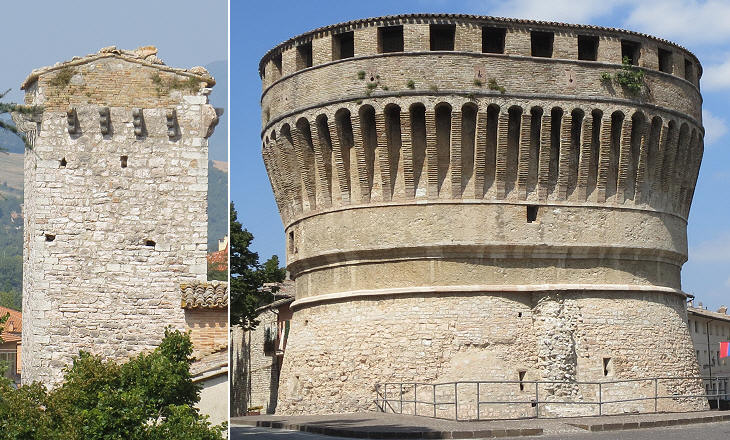 Most of the medieval walls which surrounded Cagli have been pulled down to open a ring road around the historical part of the town. These fortifications were not considered adequate by Federico da Montefeltro and Francesco di Giorgio Martini was charged with strengthening them so that they could withstand the impact of stone balls thrown by cannon. He designed an almost unique elliptical tower which was situated on the highest point of the town and was protected by a moat. The machicolation was not purely decorative as it allowed the dropping of stones or burning objects on attackers. (left) One the two main parallel streets of Cagli seen from il Torrione; (centre) starting point of "soccorso coverto"; (right) Cross of the Capuchin convent built on the site of the da Montefeltro fortress

The elliptical tower was complemented by a state-of-the-art fortress on an adjoining hill. The two were linked by a secret passage (soccorso coverto) which allowed soldiers to move between the two. In 1502 Cesare Borgia, son of Pope Alexander VI, asked Guidobaldo da Montefeltro permission to enter Cagli with his army to then move towards Camerino, a nearby town where he had been appointed Vicar of the Pope. Borgia's troops were welcomed into Cagli where they easily took control of the town and of the fortress on the hill. From there they moved towards Urbino. Guidobaldo was caught by surprise and had to flee to Venice. When eventually he returned to power he ordered the fortress on the hill to be dismantled. The secret passage is still viable, but it ends in the quiet Capuchin convent which was built on the site of the fortress.
Other fortresses designed by Francesco di Giorgio Martini can be seen in Sassocorvaro and San Leo.

Portals near the Cathedral (left) and in the main square (right); (inset) inscription on the left side of the first portal: "Non Domus Domini" which is completed on the right side by "Sed Dominus Domus" meaning "Not the house of the owner, but the house of the Lord"

The lintels of Renaissance windows and portals having a rectangular shape very often housed inscriptions; typically the name of the owner, as in Palazzo Venezia in Rome, but in many cases, when the owner was not a high ranking person, short sentences having a moral or religious purpose as in Ascoli. In Cagli, where the portals of almost all palaces followed the same Florentine pattern with projecting stones (bugnato), inscriptions were written on two slightly larger pieces at the beginning of the arch. In most cases however the sandstone where they were carved has deteriorated and the inscriptions have vanished. 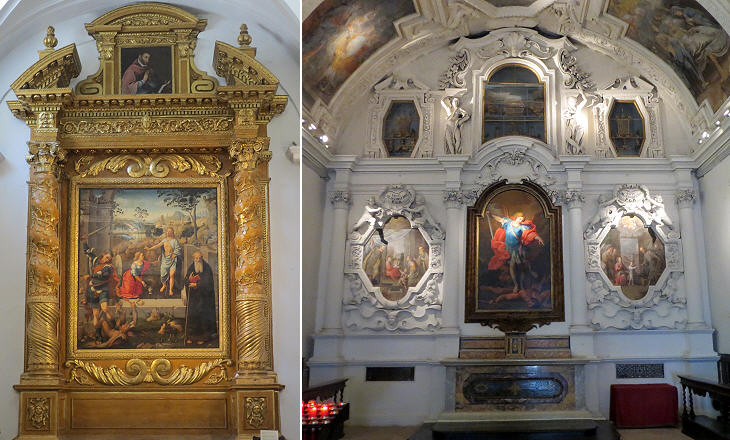 Works of art in Cagli were obviously influenced by those in Urbino; Timoteo Viti was a painter from Urbino who worked in Bologna and in his hometown. Names of churches and subject of paintings often make reference to Archangel Michael. When the town was rebuilt it was initially renamed S. Angelo Papale and a relief in Palazzo Pubblico which shows Archangel Michael in the act of killing a dragon was the symbol of the town (you can see it in the image used as background for this page). S. Giuseppe was dedicated to Archangel Michael before being assigned to Confraternita di S. Giuseppe; the members of the brotherhood changed the name of the church, but dedicated the main altar to Archangel Michael. 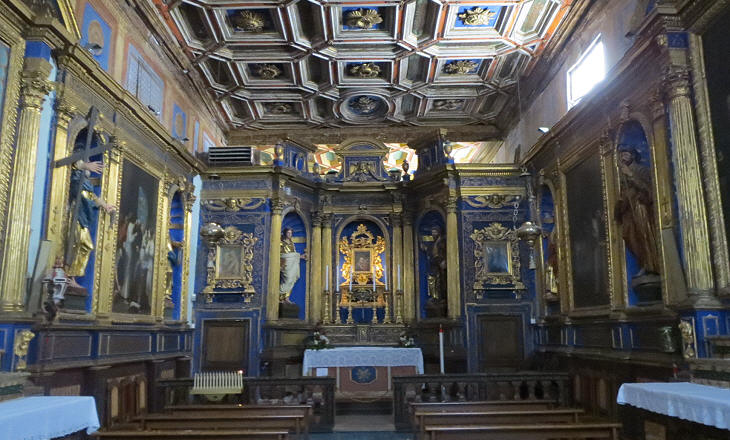 S. Bartolomeo was decorated between 1588 and 1629, the last years of the Duchy of Urbino, which became a direct possession of the Papal State in 1631. The richness of the decoration is an indication of the wealth of the town and in general of the whole Duchy during the long reign of Francesco Maria II della Rovere (1574-1631) who promoted the development of trade and manufacturing.

The policies pursued by the Papal Government had a depressive impact on the economy of Cagli. They promoted wheat farming, but yields were poor in the hilly countryside surrounding the town and misery spread to the district. The Berardi were one of the most prominent families of Cagli (Cardinal Berardo Berardi founded new Cagli) and they retained enough wealth to embellish their family palace in the XVIIIth century.