During the Roman Empire Heraclium was a minor port at the centre of the northern coast of Crete, not far from Knossos, the ancient capital of the Minoan civilization, whereas Gortyn, a town on the southern part of the island was the capital of the Roman province.
The Arabs conquered Crete in 826 and they destroyed Gortyn. Heraclium became more important and it was renamed Handax with reference to a ditch (Qandiah) which protected the town. The site of the ditch is remembered by a modern street (Odos Handakos). When the Venetians acquired control of Crete after the 1204 conquest of Constantinople by the Frank knights of the Fourth Crusade, they Italianized the name of the town into Candia and they utilized it to indicate the whole island.
The Venetian fortifications of the town included a fortress protecting the harbour and imposing walls around an area larger than the actual town. This page covers the walls while the sea fortress and other Venetian monuments are covered in a separate page. 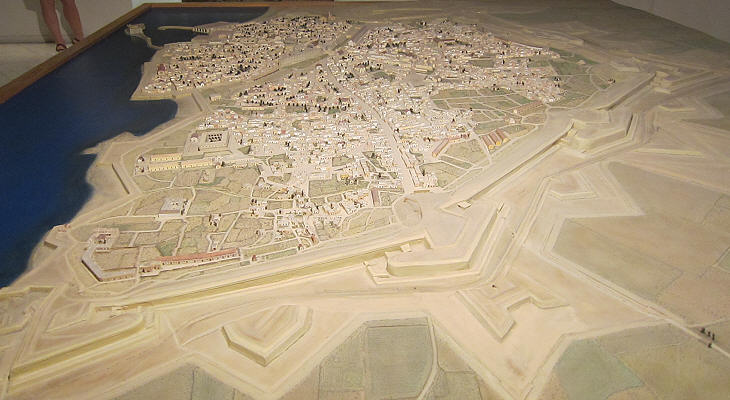 Historical Museum of Iraklion; scale model of the walls of Candia in the XVIIth century; in the foreground the western bastions and a hornwork (a bastion outside the wall curtain having the shape of an H); the older part of the town was located near the harbour and was protected by a ditch. The image used as background for this page shows the walls of Candia in a 1625 Venetian engraving

Tracé à l'italienne (designed in the Italian style) is how the French called the fortification pattern which was developed in Italy in the second half of the XVth century and which was adopted throughout Europe in the following century. The English term for such a fortification system is star fort, because the overall outline of walls and bastions resembles a star. The walls of Candia were built in 1540-70 on the basis of a plan designed by Michele Sammicheli, one of the best known Italian military architects, who in 1535 was appointed Ingegnere Capo della Repubblica by the Venetian Senate. In Venice Sammicheli designed Forte S. Andrea at the entrance to the lagoon.

S. Andrea Bastion and the modern road along the western coast of Crete

The optimal design of the fortifications developed by Sammicheli could not be implemented at the junctions between land fortifications and maritime walls which protected Candia along the sea (they are entirely lost). Bastion S. Andrea which was located at the western end of the land walls was subject to repeated attacks by the Ottomans in 1668 and again in 1669. 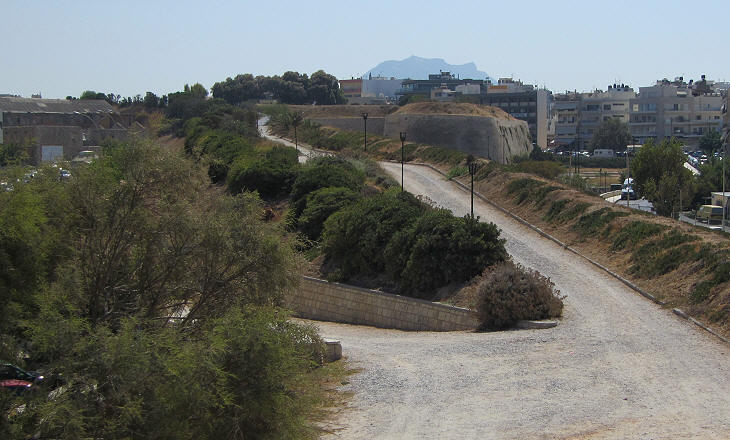 Road on the walls leading to Pantocrator bastion

The term wall when applied to those of Candia does not properly reflect the structure of its fortifications which are made up of gigantic earthen banks able to absorb the impact of cannon warfare. They mark a development versus previous types of star fort walls such as those built at Rhodes which were based on traditional walls, although thicker then medieval ones. Because their cannon were unable to breach the walls, the Ottomans dug tunnels to place and ignite charges of gunpowder at their base. 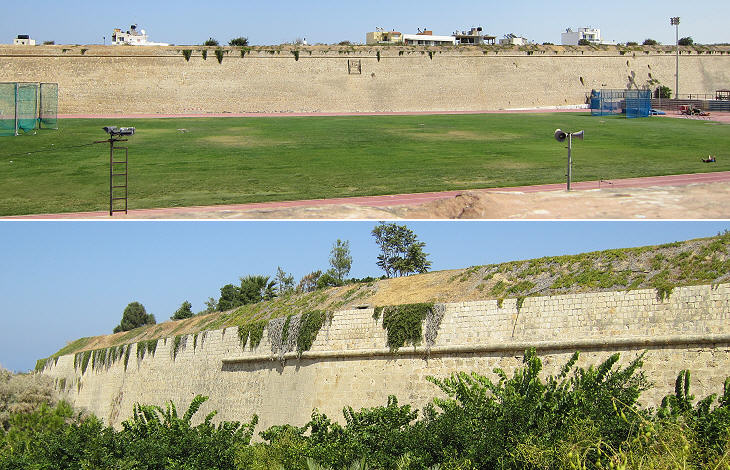 Seven large bastions strengthened the walls of Candia; five of them ended with a very obtuse angle which is rather unusual, while two (Martinengo and Vitturi) had a pointed angle because they were located at turning points of the wall curtain.

Porta del Gesù: (left) external gate; (inset) relief above the gate with the Monogram of Christ after which the gate was named; (right) bastion protecting the gate which can be seen in the right part of the image<

Usually historical gates had a celebratory purpose, but in the case of Candia, Sammicheli downplayed this aspect in favour of added security; from the outside the three gates of the town were almost invisible as each entrance opened behind a bastion. As a matter of fact the Ottomans during their long siege of Candia (1648-69) did not even attempt to enter the town by attacking a gate, as they knew that the long tunnel which led to its internal gate was mined. 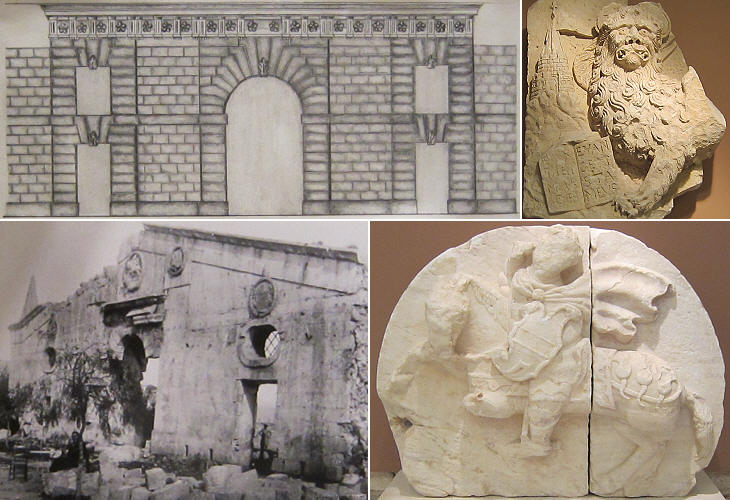 What the three gates lacked in external decoration was made up for by their internal sides; Porta del Gesù, the southern gate has a distinct Renaissance aspect and is similar to Porta del Pantocratore (in 2011 they were being restored). Porta S. Giorgio had a different design, but unfortunately it was pulled down to make room for a new road. 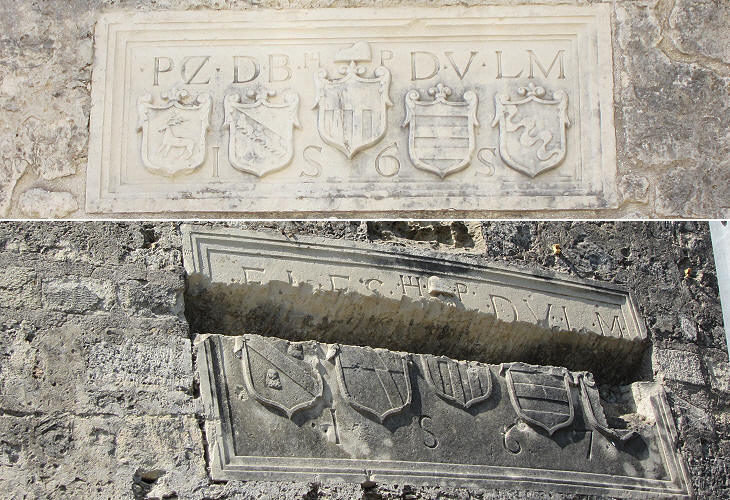 (above) Coats of arms of four Venetian officers and at the centre the coat of arms of Doge Girolamo Priuli at former Porta S. Giorgio (1565); (below) similar relief at Porta del Gesù (1567). The letters are the initials of the names (in Latin) HP = Hieronymus Priulus

The fortifications of Nicosia and Famagusta on Cyprus were built at the same time as those of Candia. Notwithsatnding their new walls the two towns fell to the Ottomans in 1570-71 whereas the walls of Candia were able to prevent the Ottomans from seizing the town for more than twenty years.
The key factor which allowed for this extraordinary result was the presence of the Venetian fleet which included galeazze, large warships equipped with heavy artillery. When the Ottomans launched their first attack they did it at Bastione Martinengo, the southernmost point of the walls which was located inland, to avoid their camp being under the fire of the galeazze. Bastione Martinengo however was designed having in mind it could be specially targeted by the enemy; Ottoman losses were so heavy that they were one of the causes of a revolt which led to the deposition (and strangling) of Sultan Ibrahim. 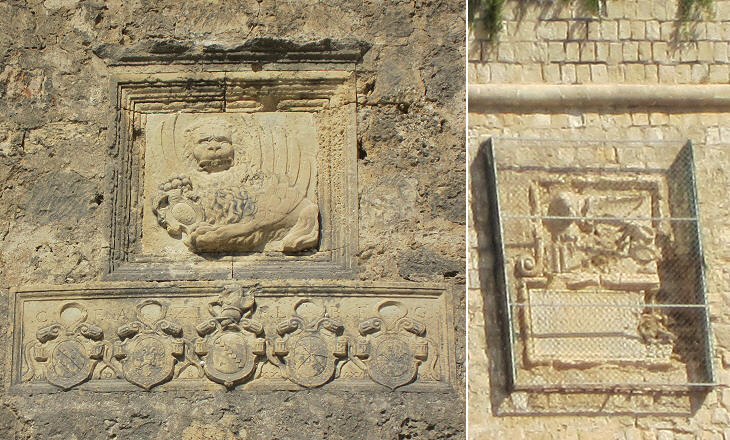 The defence of Candia was not based only on repelling the assailants, but also on the Venetian fleet attacking Ottoman ships to cut supplies to the enemy army in Candia and even to Constantinople. The Dardanelles were blockaded twice and the Ottomans had to build new fortresses on them to prevent the Venetians entering the Marmara Sea and eventually reaching Constantinople.
The resistance of Candia raised admiration in Europe and many volunteers came to help in the defence. Pope Alexander VII launched an appeal to save Candia and even France, a traditional ally of the Sultan, sent a battalion, although they fought under the papal flag, in order not to endanger relations with the Ottomans.
Eventually in 1669, after an unsuccessful attempt to break the siege, the French decided to withdraw their troops. Francesco Morosini, the Venetian commander, started negotiations with Fazil Ahmet Pacha, the Grand Vizier who was leading the Ottoman army in person. The war had strained the resources of both Venice and the Ottoman Empire, so an acceptable agreement was welcome by both parties. The Venetians were allowed to leave Candia without being attacked during this phase. With them most of the population left and many Cretan families settled on Corfu, Zante and Cefalonia, the largest Ionian Islands. Venice retained possession of three fortresses on islets protecting natural harbours (Grambusa, Souda and Spinalonga) along the coast of Crete. When eventually the Ottomans entered Candia it is said that they did not find more than 50 people. There was no pillage and no harm was done to the signs of the previous rulers: this explains why in Candia there are so many reliefs with the symbol of Venice. 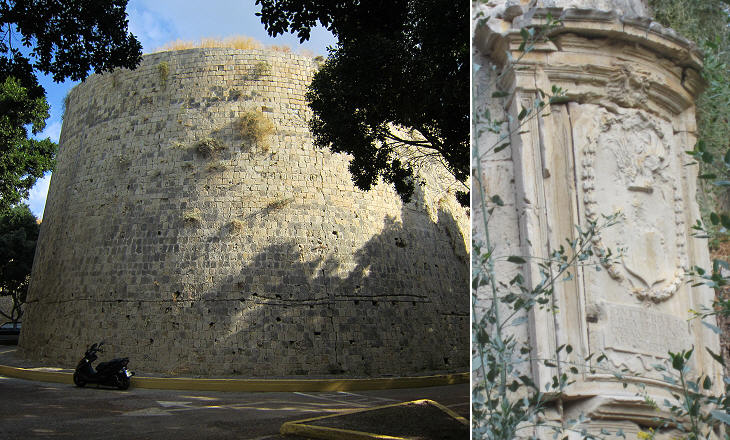 An indirect tribute to the work of Sammicheli can be found in the name used by the Ottomans to designate the town: Megalo Kastro (in Greek: the Great Castle). In 1898 when Crete was de-facto detached from the Ottoman Empire, the town went back to its ancient name (which is also spelt as Heraklion and Heraclion).