La Canea (Xanià and also Hanià and Khanià) is the second largest town of Crete and it is situated on the western part of the island. In 1898 it became the capital of the semi-independent Cretan State; after the 1913 annexation to Greece it maintained its role until 1971 when the capital of the island was moved to Iraklion, which is located in a more central position. 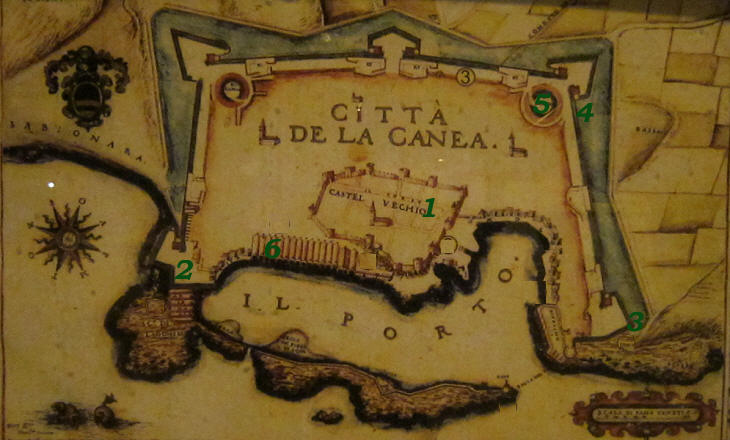 The Venetians acquired possession of Crete after the 1204 conquest of Constantinople by the Frank knights of the Fourth Crusade. Their control of the island was threatened by the Genoese and by frequent revolts of the Greek population. In 1574 Giacomo Foscarini was appointed provveditore (governor) of the island and in a report he prepared for the Venetian Senate he illustrated how the behaviour of the local noblemen and the policies implemented by his predecessors had vexed and alienated the Greeks. Historians agree that during the XVIIth century relations between Venetians and Greeks improved as well as the local economy, leading to a Cretan Renaissance in poetry and painting. At La Canea this period was marked by the construction of palaces, churches and port facilities and by the expansion of the town outside the old settlement of Castel Vecchio. 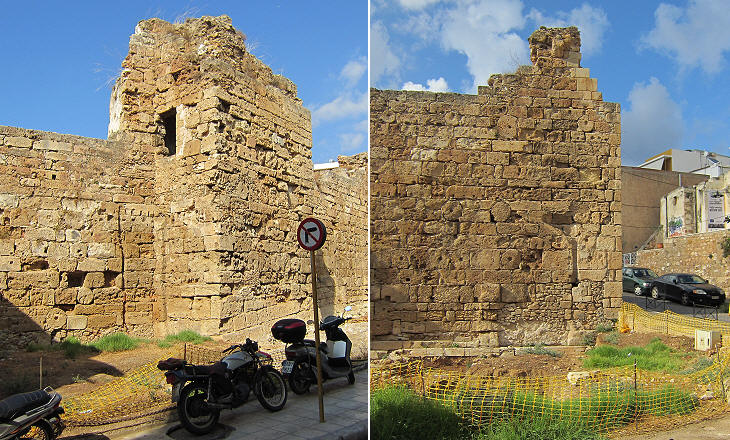 Sections of the walls of Castel Vecchio which were built utilizing materials from Kydonia, the ancient town

La Canea is the heir of Kydonia, an ancient town which flourished during the Roman Empire. During the Byzantine period the reduced population of Kydonia lived on the hill which was fortified with materials taken from ancient buildings. The site was called Castel Vecchio (Old Castle) by the Venetians. From Basilicata's engraving it appears that in the XVIIth century the walls and the three gates of Castel Vecchio were still standing, although the town had new walls.
Robert Pashley, an English traveller who visited La Canea in 1834 was the first who associated it with Kydonia; he did so solely on the basis of accounts by ancient historians and geographers. During WWII Castel Vecchio was bombed and archaeologists found actual evidence of Kydonia in the foundations of the Venetian buildings. (above) Bastione Sabbionara (named after a nearby sand beach - sand=sabbia); (below) winged lion and erased 1590 coats of arms of the Venetian officers who promoted the construction of the bastion

In 1538 Hayreddin Barbarossa (Red Beard), admiral of the Ottoman navy (and previously a much feared corsair), defeated a large Spanish-Venetian fleet at Preveza; this victory made the Ottoman Empire a great maritime power. After the Battle of Preveza Barbarossa raided several locations on Crete without fear of being attacked by enemy warships. These events led the Venetians to develop a major plan to protect their possessions in the Levant. 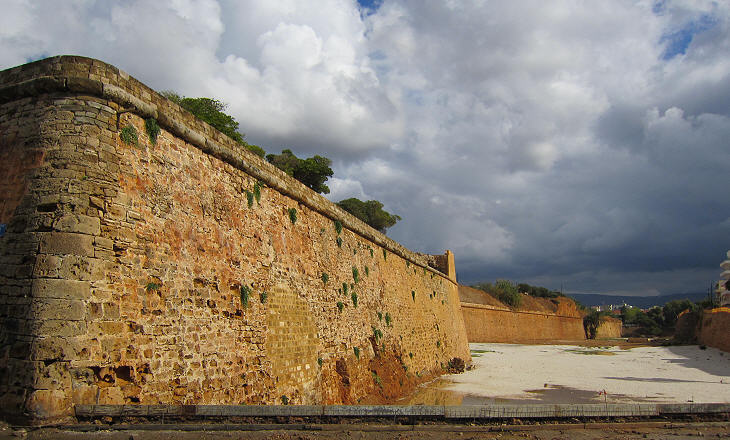 Bastione Schiavo and the moat which surrounded the walls

The new walls of La Canea and of Candia were built on the basis of a plan designed by Michele Sammicheli, one of the best known Italian military architects, who in 1535 was appointed Ingegnere Capo della Repubblica by the Venetian Senate. In Venice Sammicheli designed Forte S. Andrea at the entrance to the lagoon. While at Candia Sammicheli designed walls having the shape of a star, at La Canea they had a rectangular shape with a large bastion at each corner. 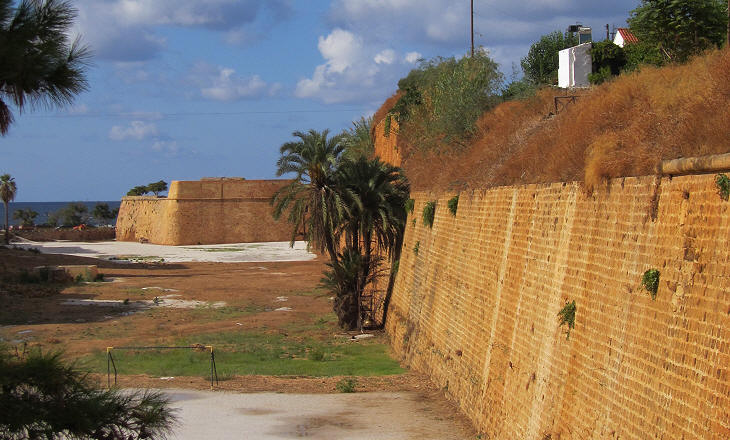 In 1645 the Ottomans waged war on Venice with the objective of seizing Crete; they landed to the west of La Canea and they laid siege to the town; the walls, because of their thickness, were able to withstand the impact of the Ottoman artillery and the first assaults were repelled. Venice reacted to the Ottoman landing by raiding Patrasso and other locations of the Peloponnese, so the bulk of its fleet did not leave the Ionian Sea. The Ottomans therefore were able to support their siege of La Canea with seventeen warships. Ottoman sappers managed to dig a tunnel which reached the base of the walls and they ignited several barrels of gunpowder causing a major breach. At this point the two sides entered negotiations and eventually the Venetians surrendered the town and were allowed to reach Rettimo, a town to the east of La Canea. 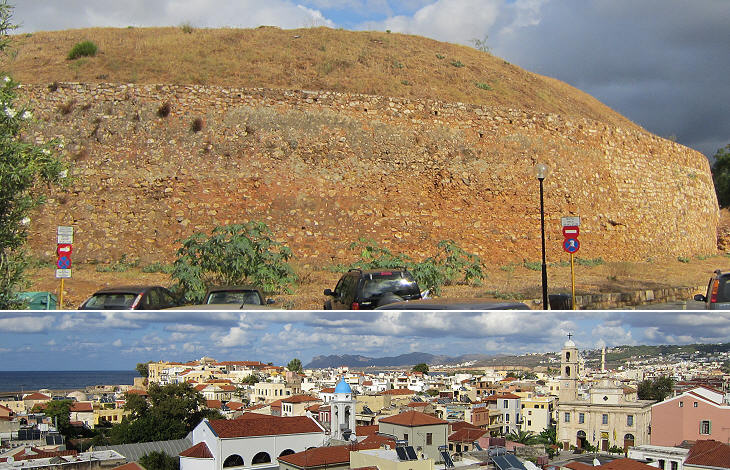 (above) A 1477 circular tower near Bastione S. Salvatore; (below) view of the town from the top of the tower: in the foreground a modern Roman Catholic church and to its right Mitropolis, the Greek Orthodox cathedral behind which one of the two remaining minarets

The loss of La Canea was final as Venetian attempts to reconquer the town in 1660, 1666 and 1692 all failed. The western and eastern walls are still in relatively good condition, whereas the southern walls were pulled down to allow the expansion of the town.
Unlike what can be observed at other former Venetian fortifications such as Nauplia, no guns can be seen on the walls of La Canea because according to Robert Pashley: The bronze guns which were on the ramparts have been removed by Mehmet Ali Pacha and taken to Alexandria; where doubtless they have already been melted and converted into money. 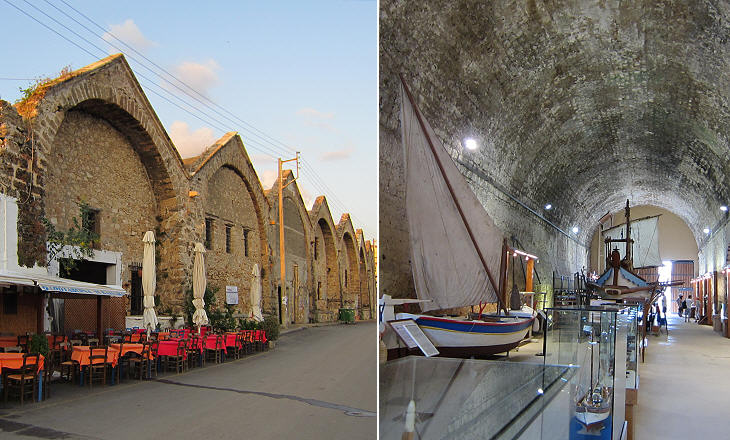 (left) Shipyards on the southern side of the harbour; (right) a shipyard hall which houses a small maritime museum

The Venetians at the same time as they were fortifying the land defences of La Canea built a series of shipyards inside the harbour for shipbuilding and repairing. These were crucial for maintaining warships. The harbour had shallow waters and Venetian convoys not having to call at La Canea preferred to moor in the well protected bay of Souda which is located a few miles to the east of the town.
Nine of the 23 shipyard halls remain; after docks were built in the harbour which prevented access by sea they have been used for a variety of purposes. 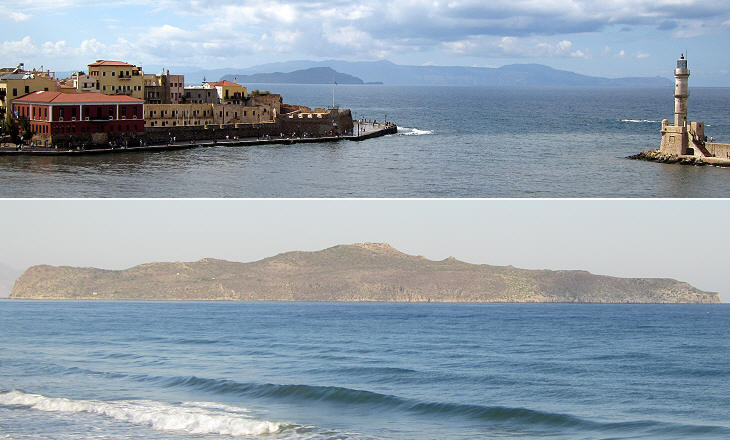 In order to provide their ships with safe anchorages along the northern coast of Crete in addition to the ports, the Venetians built fortresses on four islets. S. Teodoro is located to the west of La Canea and in 1645 it was the first fortress which was attacked by the Ottomans; its garrison was very small and the assailants greatly outnumbered the defenders. The Venetian commander, feeling that further resistance was in vain, ignited the gunpowder magazine and blew up the fortress causing large Ottoman losses. In 1650 the Venetians reoccupied S. Teodoro and considered rebuilding the fortress, but they opted instead for its total demolition. 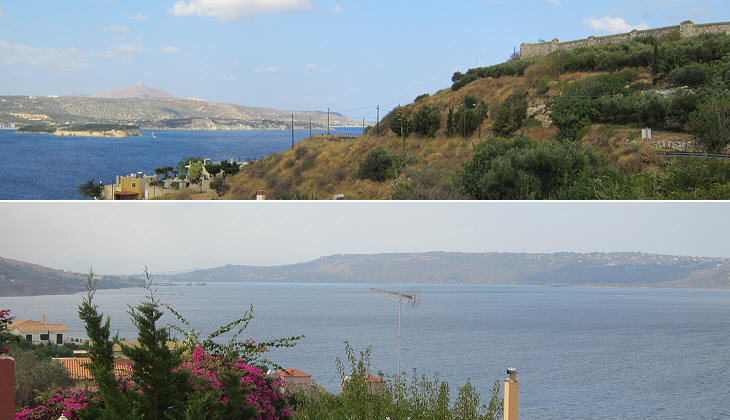 (above) The sea (left) and land (right) fortresses which protected the entrance to Souda Bay; (below) Souda Bay seen from the land fortress; Akrotiri peninsula is on the right

Souda Bay is an excellent natural harbour between Akrotiri peninsula and the coast of the island; the Venetians in 1573 completed the construction of a fortress on one of two tiny islets at the narrow entrance to the bay. The location, the size and the design of the fortress were very similar to those of Spinalonga on the eastern part of the island. 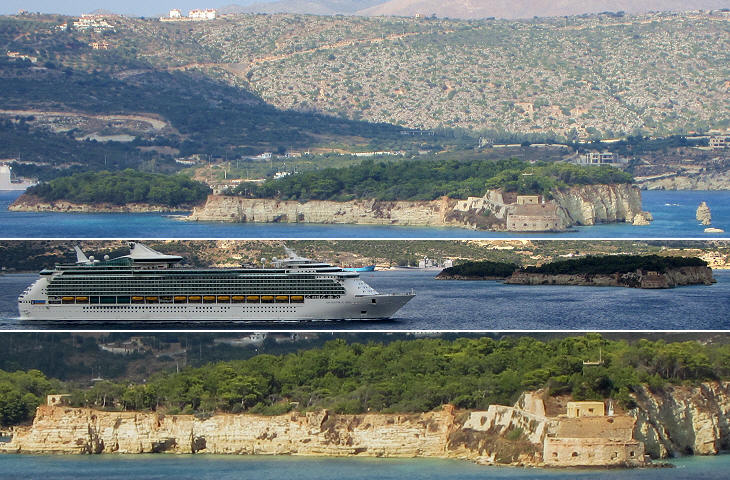 Views of the sea fortress and of its round bastion (and of Navigator of the Seas, a 1020 ft long cruise ship)

The Ottomans made attempts to seize the sea fortress of Souda in each of the four years following the fall of La Canea, but without success. In 1651 they tried to reach their objective by bribing some officers, but the plot was discovered. The 1669 peace agreement which ended the War of Candia left Souda in Venetian hands and only in 1714 the Ottomans were able to dislodge the Venetians. (above - left) Ottoman fountain at the entrance to Castello Apicorono, the land fortress at today's Kalyves; (above - right) a small section of the Venetian walls; (below) Itzendin Castle at Aptera

The Venetians built a small castle on the southern coast of the bay, opposite the sea fortress; it now houses an artillery base of the Greek army which is surrounded by high modern walls. Because of the development of long distance artillery in 1872 the Ottomans built a new fortress on the top of the mountain behind Castello Apicorono. Today this fortress houses a prison.
There are restrictions on taking photos of all the fortresses, including the sea one because of its proximity to a NATO naval base.
The image used as background for this page shows three erased Venetian coats of arms on the eastern walls of La Canea.