Carthago (Carthage): Roman period
(detail of the theatre at Thugga)

You may wish to see an introductory page to this section or a page on the Punic memories of Carthage first.

But now nothing remains of the great city save a few cisterns and some shapeless masses of masonry; all that is valuable has been carried off either for the construction of the modern city of Tunis or to enrich the public buildings and museums of Europe; and now, indeed, there can be no doubt that in very truth: "Deleta est Carthago" (Carthage is destroyed).
1895 Murray's Handbook for travellers in Algeria and Tunisia 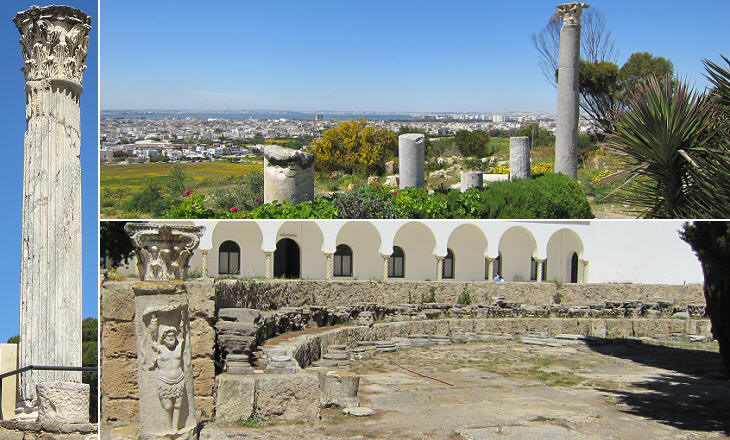 Acropolis (see the view from it in the introductory page): (left) Column of the Temple to Esculapius; (right-above) columns of the Public Library; (right-below) capitals on the site of the apse of the Basilica

In 695 Carthage was conquered by the Arabs, but two years later a Byzantine expeditionary force managed to seize it back. In 698 an Arab army surrounded the city and unlike what occurred in many occasions in Spain its commander did not offer generous terms of surrender. The long siege which ensued led to the second and final destruction of Carthage. The Arabs set the capital of Ifriqiya, as they called the Roman province of Africa, at Kairouan, at a considerable distance from the coast. The columns of the churches and former temples of Carthage were used to build the Great Mosque of Tunis and Carthage was abandoned, the remaining buildings being used as quarries. 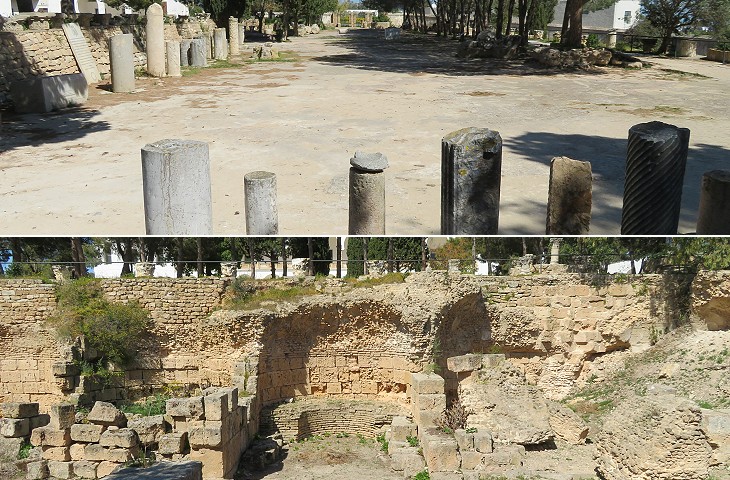 Acropolis: (above) site of the Basilica; (below) walls supporting the terrace upon which it was built

Archaeological campaigns started in 1857, but they were mainly limited to the hill where the acropolis stood. The excavation of the Roman Forum on the acropolis was in part sacrificed to the unearthing of a quarter of the Punic town.
Following a UNESCO initiative in 1973, the whole area of the ancient town was mapped and declared of archaeological interest, but only a few parcels of land were not already part of luxury villas or apartment blocks. As a consequence the ticket allowing entrance to ancient Carthage lists ten different sites surrounded by the modern town. 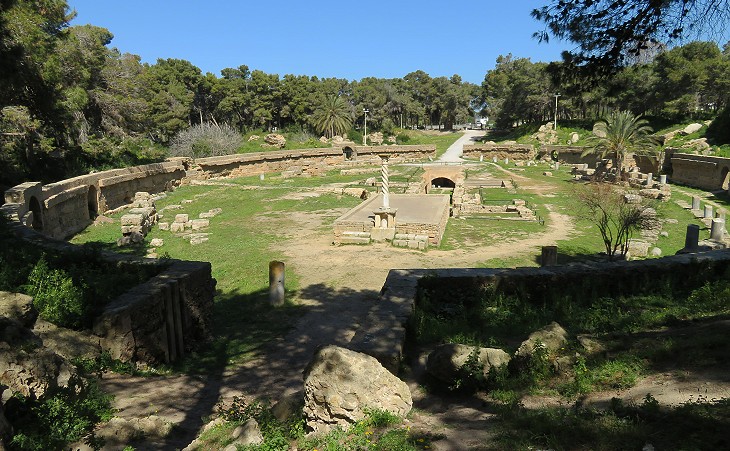 In the plain, at the foot of the hill at Maallakah, are seen the foundations of an amphitheatre, whose extreme length was about 300 feet by 230, and the dimensions of the arena 180 feet by 100. This building was supplied, when it was required to convert it into a naumachia (naval combats), with water from the cisterns on the hill.
Sir Grenville Temple - Excursions in the Mediterranean - 1835
In ca 1068 Abou Obeid el-Bekri, an Arab geographer, described the amphitheatre as a "castle of an enormous size and height which was made of several rows of arches". Today only the arena remains; it is thought to have been built in the Ist century AD and subsequently enlarged. Notwithstanding the proximity of hills which would have facilitated the construction it stands in the plain, similar to that of Thysdrus. 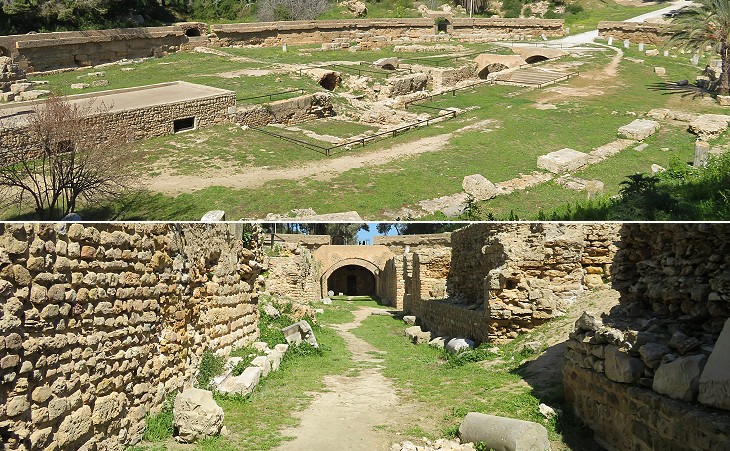 Amphitheatre: (above) view of the arena; (below) underground facilities with at the end the Chapel of St. Perpetua, the presence of which is marked by a column in the arena

Si saevitiam, si impietatem permissam nobis contendere possumus, eamus in amphitheatrum quales dicimur, delectemur sanguine humano. If we can plead that cruelty is allowed us, if impiety, if brute savagery, then let us go to the amphitheatre. If we are what they say we are, let us take our delight in the blood of men.
Tertullian - De Spectaculis - translation by T. R Glover.
Tertullian was a Christian author of the early IIIrd century from Carthage; his writings strongly condemned the shows in the amphitheatres. Similar condemnations were issued by St. Augustine in ca 400.
Amphitheatre. Little more remains, however, than an elliptical excavation; the stones have all been taken away. This was the scene of the martyrdom of Saint Perpetua and her companions on the 7th March 203. The excavations made here by the Pere Delattre in 1881 brought to light a subterranean vault which may have served as the prison of the martyrs or as a den for the wild beasts. In 1894 the excavation was continued, and several fragments of column and architraves were found, also an immense quantity of bones. The vault has been transformed into a chapel, and on the anniversary of Saint Perpetua's martyrdom in 1895, a mass was celebrated in it by Monseigneur Combes, Archbisbop of Carthage and Primate of Africa. Murray
The excavations were directed by a French missionary and encouraged by the Archbishop of Carthage. Similar to what occurred at Uppenna a few years later, the focus of the archaeological campaign was on highlighting the Christian presence in Tunisia. 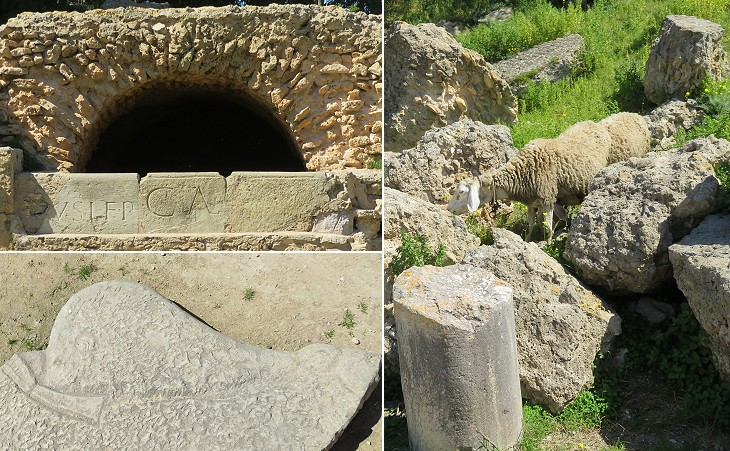 Amphitheatre: (left-above) fragments of inscriptions; (left-below) a marble division of the seating section, similar to those at Capua and Rome; (right) a sheep with a penchant for archaeology (not the only one, see the introductory page) 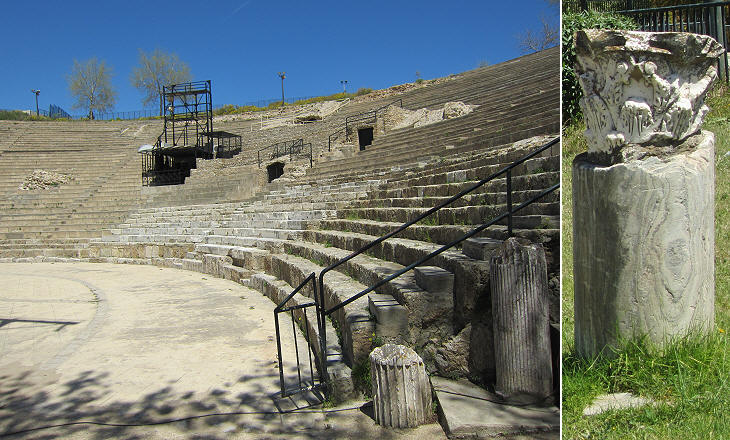 The Roman theatre was built on the slope of a hill to the north of the acropolis in the early IInd century AD. It was entirely replaced by a modern one (only a very small section was rebuilt with the original stones) which houses the International Festival of Carthage.
The statues found on the site, including one of Apollo Citharede (shown in the next page), were moved to the Museum of Bardo in Tunis. The only interesting thing to see is a selection of ancient columns of different colours from the four corners of the Empire which are evidence of the wealth of the city. 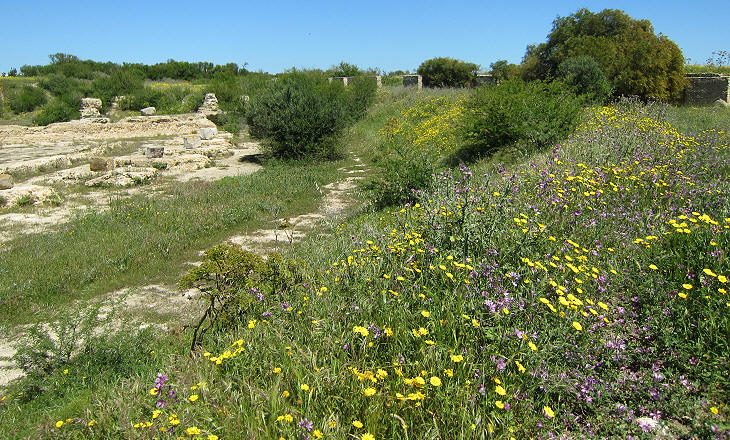 Tunisian authorities go from one extreme to the other when dealing with the ancient monuments of their country: they rebuilt the theatre, but they seem not to care about maintaining the odeum which stands behind it. It was built at the beginning of the IIIrd century to house musical and poetry contests. In origin odeums were small roofed buildings, but during the Roman Empire some very large odeums were built, e.g. that of Herodes Atticus at Athens. They very often adjoined a theatre as at Philadelphia (Amman). 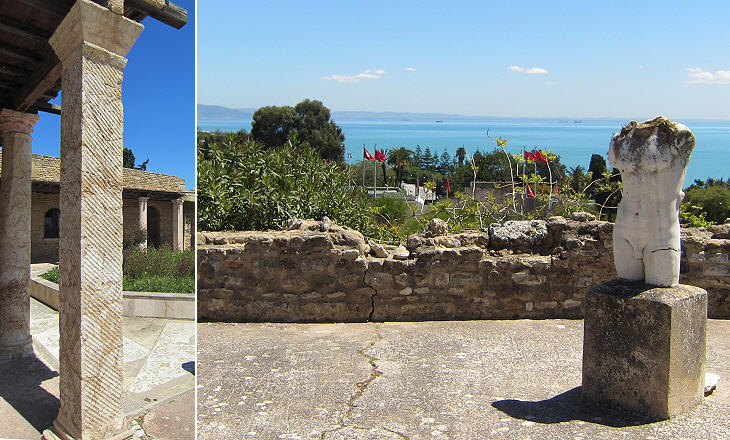 (left) A pillar of "Villa of the Aviary"; (right) the terrace and a statue found nearby. In the background the Tunisian flags indicate the Presidential villa, where large ancient cisterns are located

We do not know the name of the owner of a large villa near the odeon with a commanding view over the sea. He must have been a very wealthy man. In the IInd and IIIrd century, Carthage was the second largest city of the western part of the Roman Empire and its population probably reached 500,000 inhabitants. The real estate value of the land where the villa was built must have been astronomical. 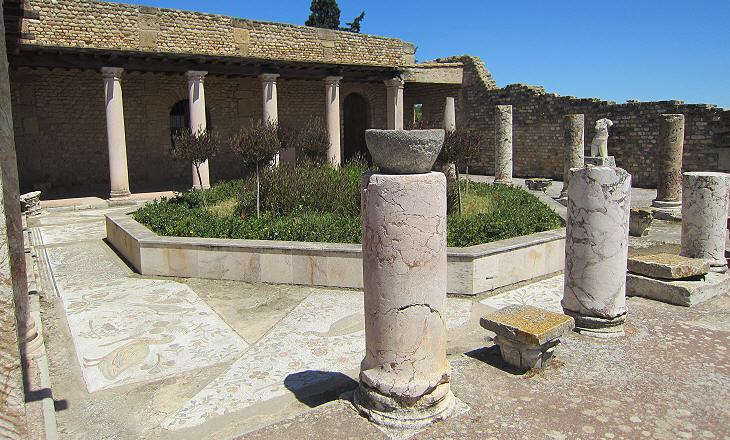 The current aspect of the villa is the result of excavations carried out in the 1960s at the end of which columns and other materials found in nearby buildings were utilized to complete the reconstruction of the villa. Similar to what can be observed at the theatre, the columns come from different countries. 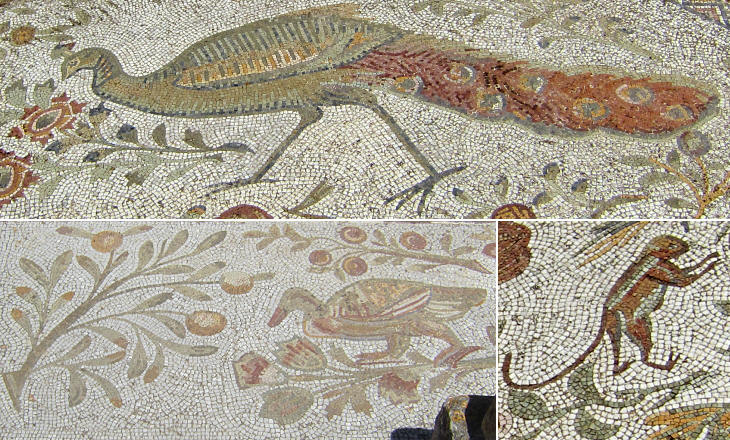 Villa of the Aviary: details of the mosaic in the peristyle

The villa was named after the large mosaic of its peristyle which depicts many birds with other small animals, flowers and fruits. It was a common subject for mosaics (see that at Caesarea Maritima), in particular for those outdoors, but it could also indicate that it was made during the Late Empire when the depiction of gods and mythical episodes was no longer in fashion. 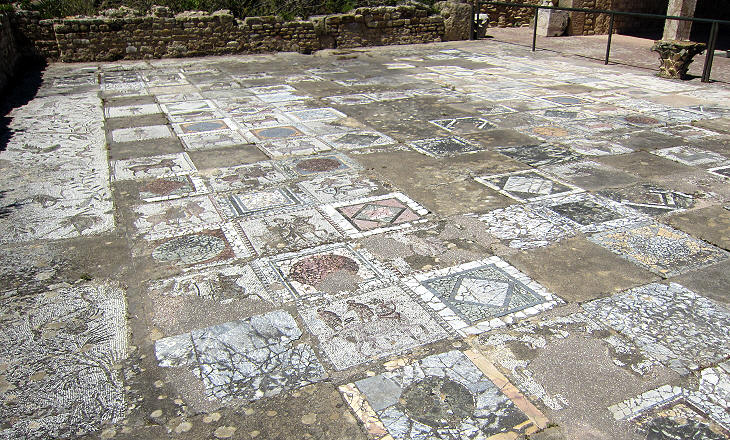 Villa of the Aviary: terrace with a mixed "opus sectile"/mosaic floor

A terrace near the peristyle houses a complex decoration which in part is made of small mosaics portraying animals and horsemen and in part is geometric with pieces of marble replacing the mosaics (see an impressive example of opus sectile at Ostia). The latter is evidence of spolia, i.e. the re-use of material of earlier buildings, which suggests the decoration was made or modified in the Late Empire. Emperor Hadrian visited the province of Africa twice; during his second visit in 128 he promoted the construction of a long aqueduct from Ziqua to Carthage. When eventually the aqueduct and the large baths it supplied were completed the latter were named after Antoninus Pius, Hadrian's successor. The complex of buildings was very imposing and ipsa ruina docet (the ruins speak for themselves), a saying usually applied to Rome, fits these baths too. A column has been re-erected above the supporting structures in order to convey the idea of the height of the halls. The baths were built on the sea front and their view from the ships heading towards the harbour must have been impressive.
The Romans enjoyed living by the sea (see Tiberius' villa at Sperlonga). Pliny the Elder regarded sea bathing as a healthy practice although he warned about its exciting effects (you may wish to see the baths by the sea of Sabratha, another Roman town in Africa). 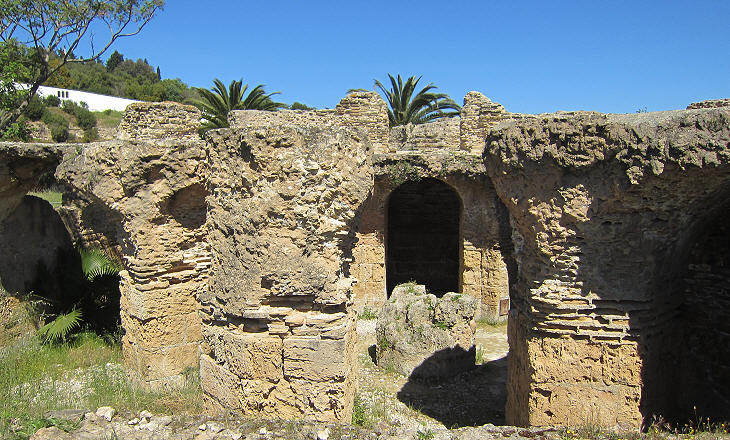 While we cannot admire the baths in their original splendour, we can appreciate the construction technique of the underground system of passages which allowed the staff to move about the baths without disturbing the patrons, similar to what occurred at Hadrian's villa in Tivoli. 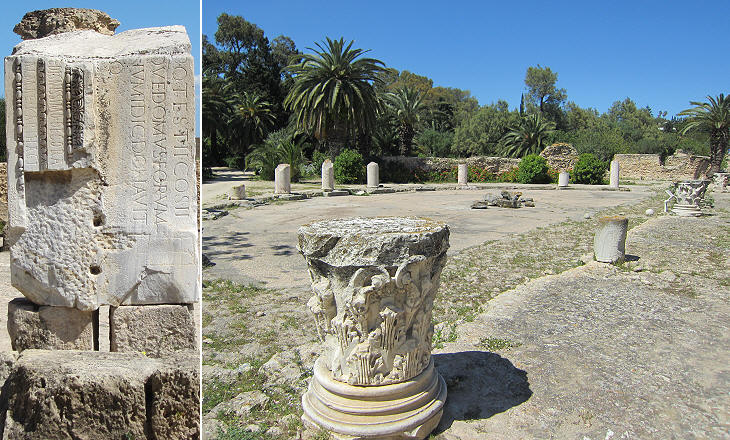 While today's modern society accepts some aspects of the Roman way of life which were despised for centuries, e.g. bathing, that of regarding latrines as a convenient place for social meetings (see the cosy latrines of baths at Uthina) is still rejected. The latrines of the Antonine Baths were very large and they were decorated with precious marbles as those built at approximately the same time at Leptis Magna, another important Roman town in Africa. 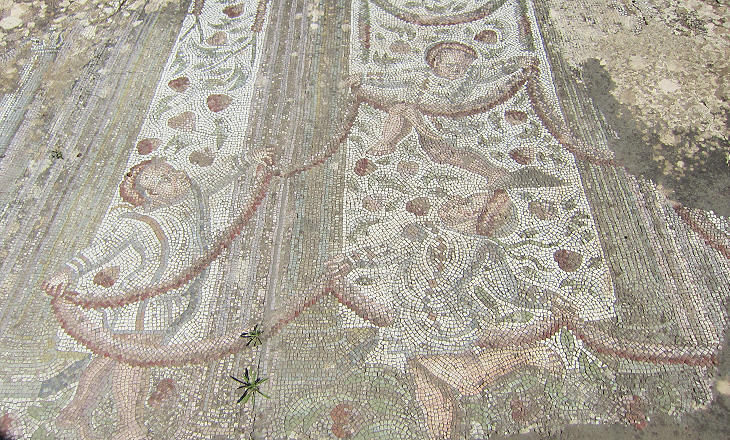 Mosaic at the house of the "schola"

The "Archaeological Park of the Antonine Baths" includes the ruins of a few buildings behind the Baths. They are aligned along the customary grid of Roman towns. They generally belong to a later period than the Baths. A complex building which retains an elegant mosaic with children dancing in a background of rose petals, is believed to have been the meeting place of a "schola", a unit of Imperial guards created by Emperor Diocletian. Apparently the subject of the mosaic does not seem fit for such a meeting place, but the dropping of rose petals might have been part of the complex ceremonial introduced by Emperor Diocletian for his public appearances. 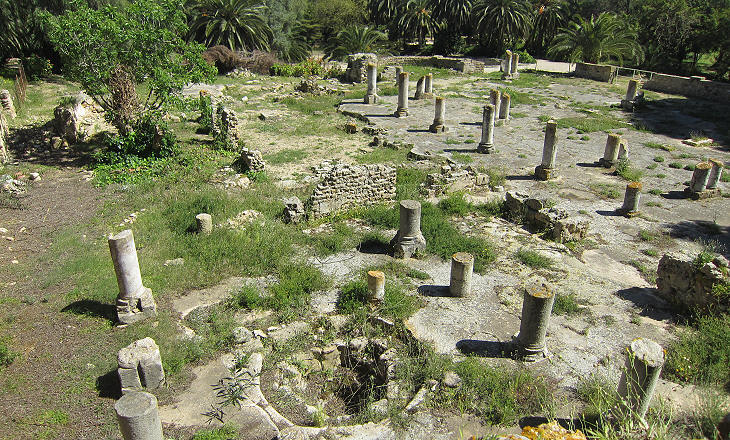 Carthage was home to a thriving Christian community since the IInd century AD, but this large basilica built with spolia is dated Vth or VIth century. It had a separate round baptistery surrounded by columns (perhaps decorated as that found at Kelibia).

At the entrance to the "Archaeological Park of the Antonine Baths", a panel with a plan of the site suggests two itineraries: "Short Circuit" and "Global Circuit". The former includes just a visit to the Baths, the latter a visit to the entire archaeological area, which is not that large when compared to others. From a visit made in April 2012 it appeared that the two itineraries corresponded to different levels of maintenance: the Baths were well cared for, whereas all the other monuments were left in a state of total abandonment. 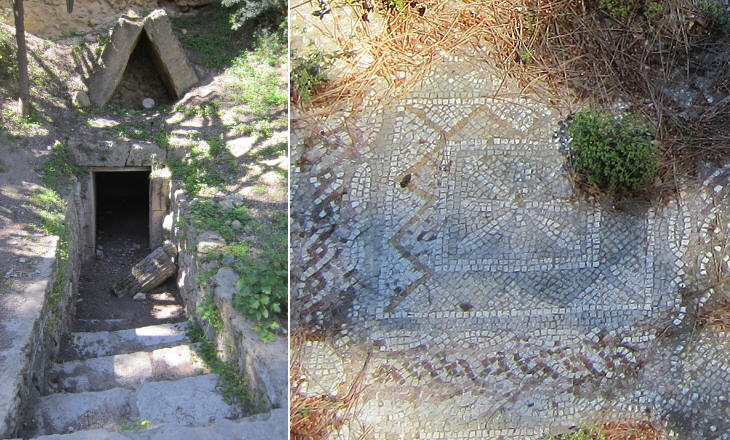 (left) Punic necropolis of Douimes; (right) mosaic near the "schola"

The image used as background for this page shows a gladiator on a pottery lamp in the Paleo-Christian Museum of Carthage.

Move to: Carthage - Punic memories or to Carthage in the Museums.