All XVIIIth century travellers remarked on the poor state of the countryside north of Rome. President Charles de Brosses wrote in 1739: The popes who, starting from Pope Sixtus V, did so much to embellish Rome, did nothing to promote farming in the countryside, where one cannot see a single house, a single tree.
The popes followed a policy of controlling the final price of the main agricultural commodities, which they tried to keep as low as possible by forbidding the exportation of these crops and by directly importing them to reduce the impact on prices of occasional shortages (you may wish to see the granaries they built). This policy eventually depressed the return of farming investments and favoured the concentration of the land in the hands of Roman noble families or of religious institutions. These owners preferred to invest in the urban development of Rome rather than in their farms. After the completion of the unification of Italy in 1870 a series of land reform bills favoured the development of small properties and promoted intensive agriculture. 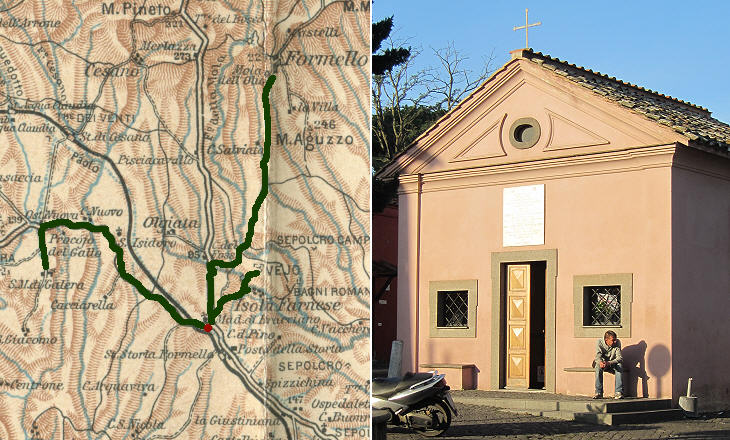 (left) 1924 Map of the area covered in this page; (right) Madonna di Bracciano (red dot in the map)

This page deals with the countryside immediately north of Rome which is in the process of being absorbed by the expansion of residential areas. The main road crossing the area is Via Cassia which starts immediately after Ponte Milvio. At an old little chapel called Madonna di Bracciano three roads (marked in green in the map) branch off Via Cassia and lead to some locations which still give an idea of the Roman countryside in the past centuries. At Madonna di Bracciano a road branches off Via Cassia to the left and leads to Bracciano. It joins Via Cassia again near Sutri. At Osteria Nuova, the first crossroad, a hedge hides a 1749 fountain meant both for human and animal utilization. 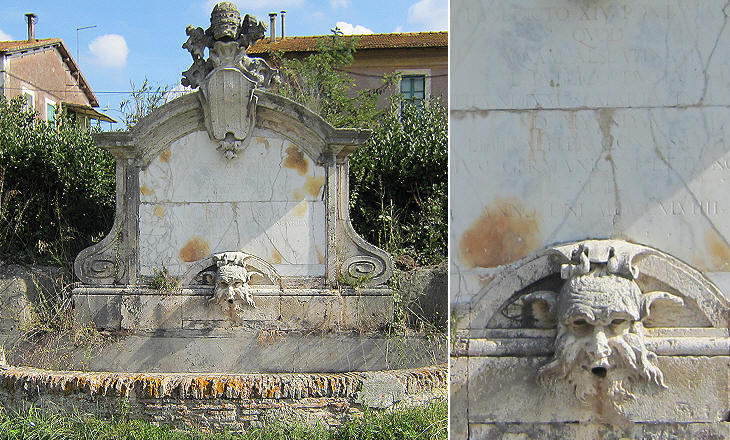 The inscription commemorates the gift of a free water supply by Pope Benedict XIV to Collegio Germanico (an institution founded by Pope Gregory XIII in the second half of the XVIth century to promote Catholicism in Germany) which owned most of the land south of Bracciano. The water came from a Roman aqueduct which was reactivated in 1612 by Pope Paul V and ended at Fontanone dell'Acqua Paola. 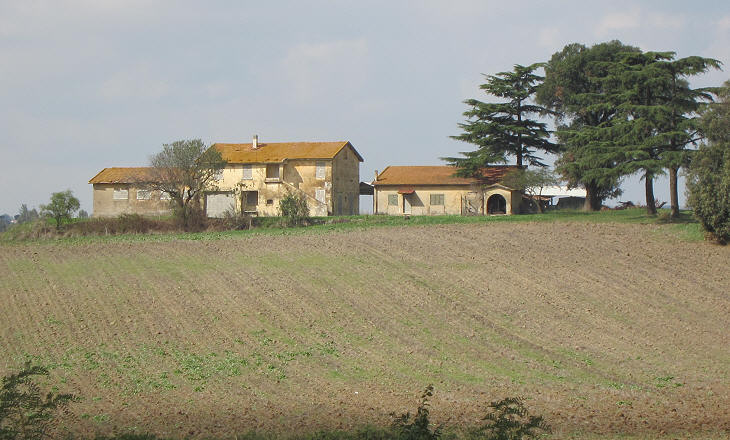 The area was owned by Collegio Germanico until 1980 and it was not split into small parcels; in the XIXth century it was plagued by malaria. The road to Bracciano turns to the left, over a most dreary thistle-grown part of the Campagna, with here and there a deep cutting in the tufa, and banks covered with violets and crowned with golden genista. Only a short time ago the medieval town of Galera (or Galeria near Osteria Nuova) had ninety inhabitants. Now it has none. There is no one to live in the houses, no one to pray in the church. Malaria reigns triumphant here, and keeps all human creatures at bay. Even the shepherd who comes down in the day to watch the goats which are scrambling about the broken walls, would pay with his life for passing the night here.
Augustus J. C. Hare - Days Near Rome - 1875. 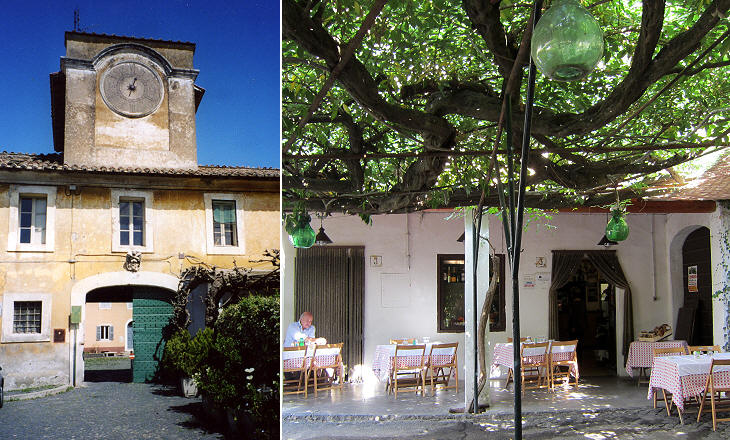 S. Maria di Galeria: (left) entrance; (right) a "trattoria" under the pergola to the right of the entrance

At Osteria Nuova a short road leads to S. Maria di Galeria, the main farm of the estate belonging to Collegio Germanico. Houses, stables and storerooms are arranged around a large courtyard which can be accessed only through a gateway decorated with a coat of arms of Pope Gregory XIII. S. Maria di Galeria is no longer a farm and in October 2012, when the pictures which illustrate this page were taken, its buildings were in the process of being refurbished. Properties at S. Maria di Galeria were unlikely to be sold because of their proximity to a large transmission facility for Radio Vatican (you may see it in a separate window). In July 2012 Vatican authorities announced a major reduction of transmissions and there is now hope that people will settle at S. Maria di Galeria again. S. Maria di Galeria: (left) coat of arms of Pope Gregory XIII; (right) relief above the entrance to the church

The church of S. Maria di Galeria dates back to the XVth century. The portal has an interesting although much damaged relief showing the Virgin Mary in the act of stepping on a snake and a basilisk and of taming a lion and a dragon (Super aspidem et basiliscum ambulabis, conculcabis leonem et draconem). The basilisk, a fabulous reptile, was a symbol of lust and in the late XVth century syphilis was also called the basilisk disease. Details: A) 1822 clock in the courtyard indicating the Italian Hour; B) coat of arms of Pope Gregory XIII on a farm near Osteria Nuova; C) column containing a siphon of the old aqueduct; D) ancient sarcophagus

Immediately after Madonna di Bracciano a short road to the right leads to Isola Farnese, a hamlet on a small volcanic tufa rock which was believed to be the acropolis of Veii, an ancient Etruscan town. 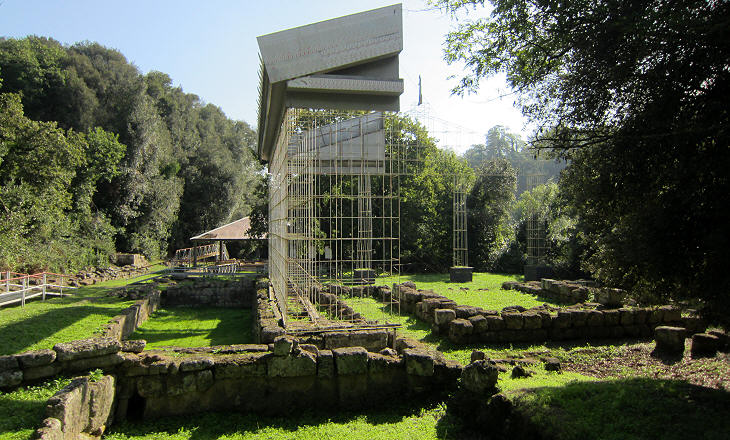 Ruins of a sanctuary to Apollo and Minerva

The city of Veii was not inferior to Rome itself in buildings, and possessed a large and fruitful territory, partly mountainous, and partly in the plain. The air was pure and healthy, the country being free from the vicinity of marshes, which produce a heavy atmosphere, and without any river which might render the morning air too rigid. Nevertheless there was abundance of water, not artificially conducted, but rising from natural springs, and good to drink.
Dionysius of Halicarnassus - Roman Antiquities - Book XII. 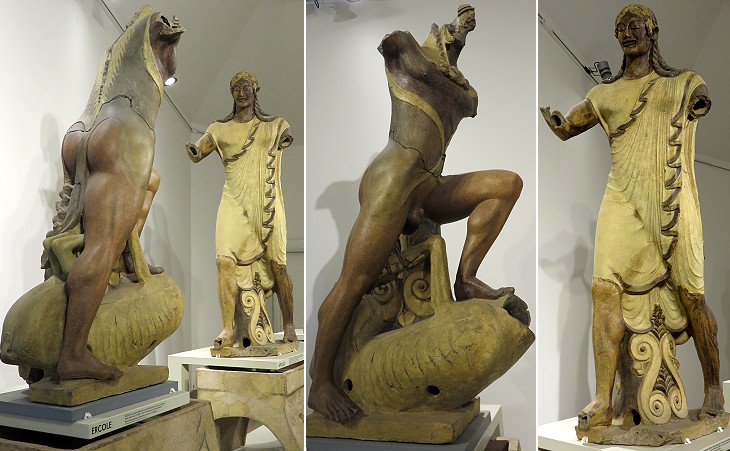 In 1916 archaeologists identified the site of a sanctuary dedicated to Apollo and Minerva and found the fragments of painted terracotta statues of Apollo and Hercules fighting for the doe with the golden horns which most likely stood on the roof of a large temple.
The sanctuary was situated on a terrace surrounded by woods outside the town. 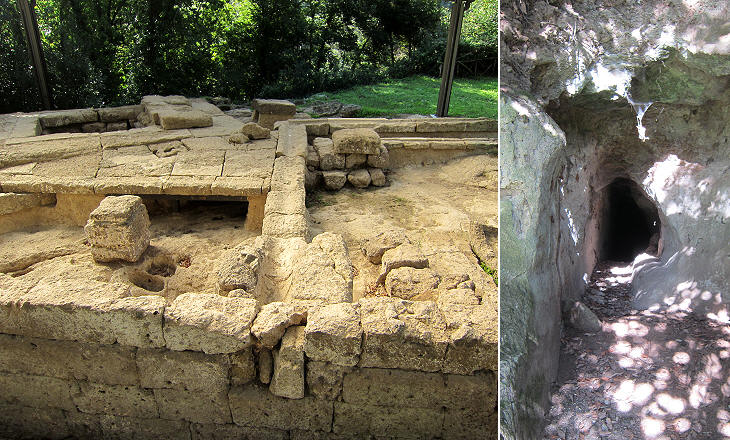 (left) Section of the sanctuary where archaeologists found offers to Minerva; (right) a tunnel cut into the rock trough which water poured into a pool adjoining the temple

The site of one of the most celebrated cities of ancient Europe had been long a problem to perplex the antiquary; and on its discovery this once flourishing and martial city, still proud in its ancient reminiscences, is with difficulty recognised, having lost almost even its ruins. Of its stately edifices, its temples, theatres, forum, etc. scarcely a vestige remains; the bones of its inhabitants have crumbled into indistinguishable dust; and in their long sleep of oblivion their names and their memories, like themselves, have passed away as if they were not!
Rev. Jeremiah Donovan - Rome Ancient and Modern - 1844. 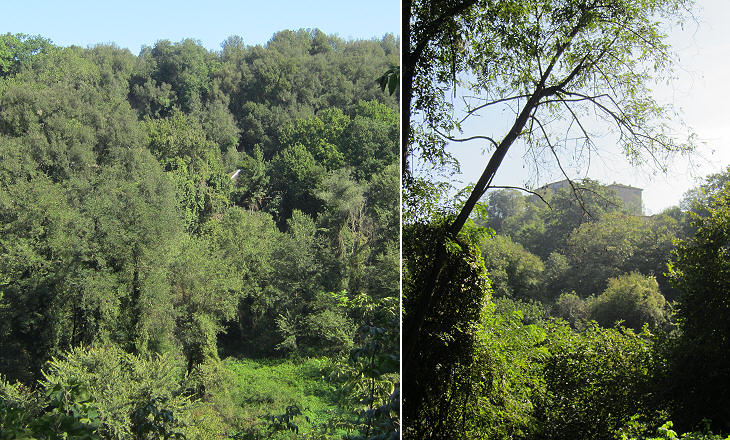 A deep lane between high banks of tufa overhung by bay and ilex, leads into the ravine, where a brook called Fosso de' due Fossi (from the two little torrents, Storta and Pino, of which it is formed) tumbles over a steep rock into the chasm near an old mill. The craggy hillside is covered with luxuriant foliage, and snowdrifted with laurustinus bloom in spring; the ground is carpeted with violets and blue and white wood anemones. Beyond the mill, where we cross the brook upon stepping stones, a small gateway of medieval times, opening upon a green lawn overhanging the chasm, with the castle of Isola crowning the opposite cliff, forms a subject dear to artists, and many are the picnics which meet on the turfy slope under the shade of the old cork trees. Hare 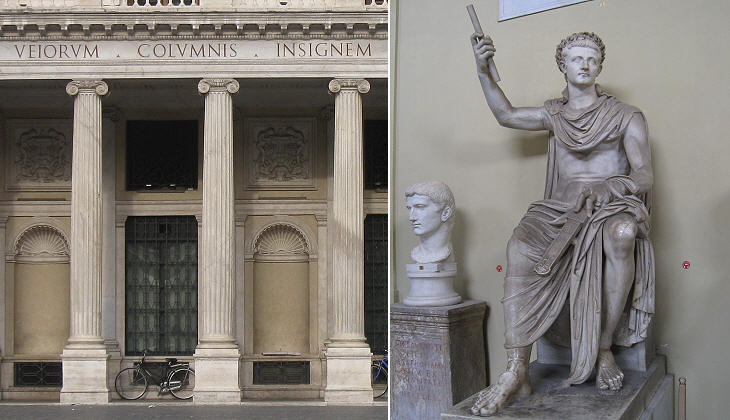 Veii blocked the northward expansion of Rome until it was seized and destroyed by Marcus Furius Camillus in 396 BC.
Julius Caesar founded a town by the same name near the Etruscan one. Excavations in 1810-1814 led to the discovery of several inscriptions, some statues of the Ist century AD (now at Musei Vaticani) and sets of columns which were used to embellish Palazzo del Vicegerente and new S. Paolo fuori le Mura. 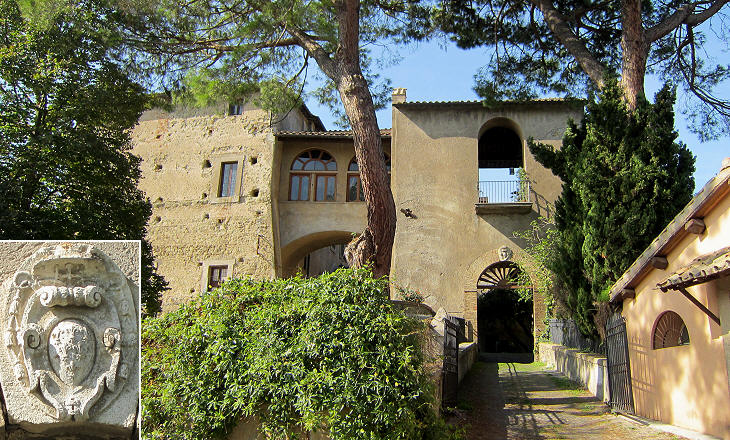 Farnese palace; (inset) coat of arms of a Farnese cardinal

Isola Farnese belonged to the family of Pope Paul III who had several possessions north of Rome (Ronciglione, Caprarola, Nepi and the Duchy of Castro). The main building was at the same time a palace, a fortress and a farm. 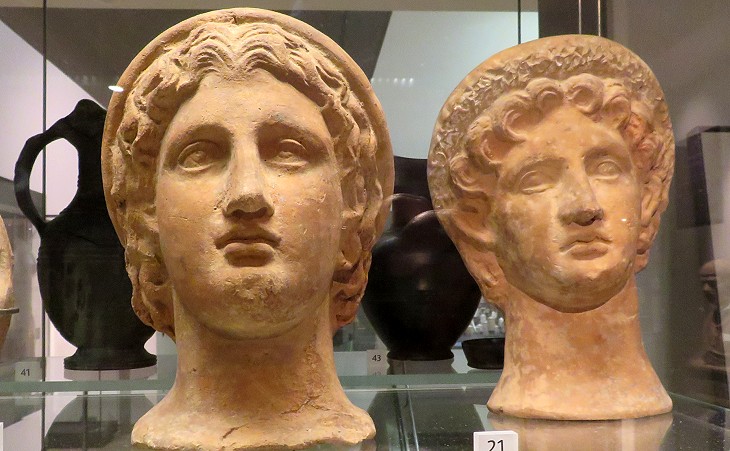 Ashmolean Museum of Oxford: terracottas from Veii (ca 300 BC)

In 1844 Isola Farnese was acquired by the Rospigliosi; according to Rev. Donovan the new owners let the Etruscan tombs in their estate to dealers in antiquities who caused great damage by searching for jewels and statues. 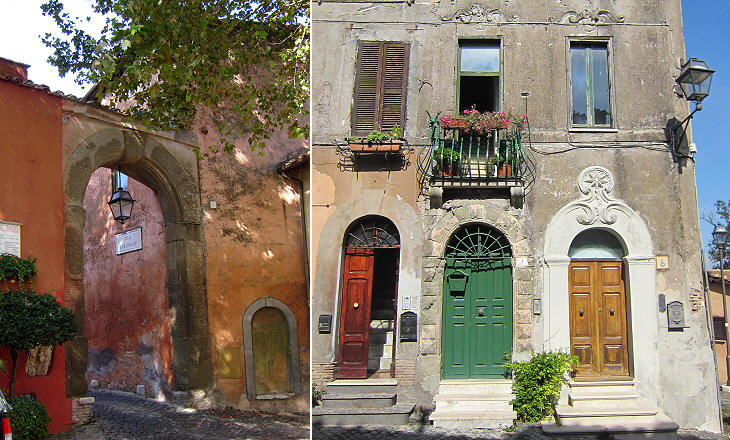 (left) Entrance to Isola Farnese; (right) houses in the street leading to the palace

Isola Farnese has some decorated houses which indicate a degree of wealth, but in 1844 it was described by Rev. Donovan as a wretched village, the squalid population of which amounts to about 22 inhabitants. 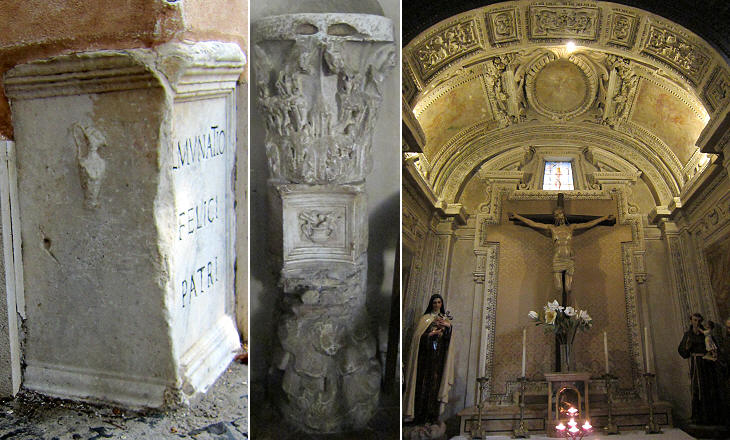 Another road to the right of Via Cassia leads to Formello, a fief which belonged for a long time to the Orsini, whose coat of arms can be seen in the image used as background for this page. 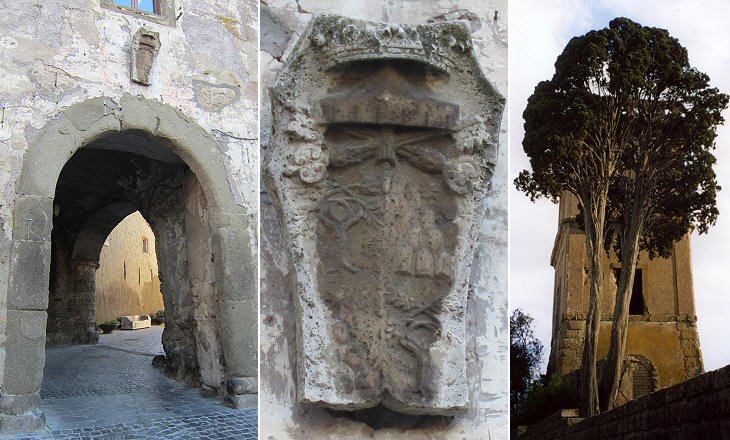 In 1661 Cardinal Flavio Chigi, nephew of Pope Alexander VII, acquired the fiefdom of Formello and decided to set his countryside residence there, at least in spring and autumn, because the small town is situated at only 600 ft and in summer the heat and the risk of malaria made it unsuitable for entertaining guests.
Cardinal Chigi built a villa a few miles from Formello to which he gave the exceedingly ambitious name of Villa di Versaglia (Versailles). His heirs did not wish to bear the cost of maintaining the villa and in the XIXth century they even took away the roof of the main building to use its beams in another of their properties (in 1763-1771 they built a small villa near Ponte Nomentano). Today a tower which was built by Cardinal Chigi to make his villa visible from a distance is the only building left standing. 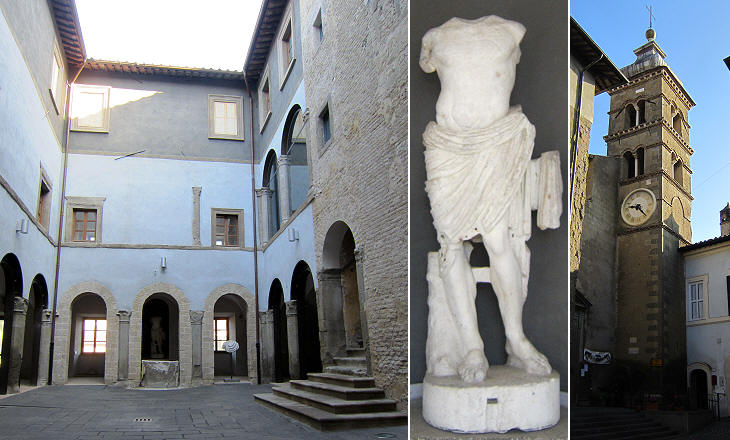 Cardinal Chigi restored and enlarged the palace built by the Orsini at the entrance to Formello. Today the building is the Town Hall of Formello and its courtyard houses some statues, inscriptions and sarcophagi which were part of the Cardinal's collection.

Ancient sarcophagus which belonged to the Chigi in the Town Hall

In 1677 Cardinal Chigi restored and modified the bell tower of S. Lorenzo, the church adjoining his palace. 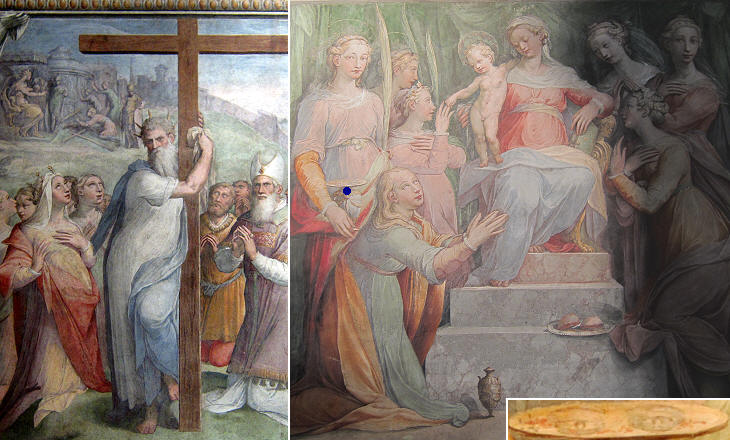 Two 1570 frescoes by Donato Palmieri in S. Lorenzo: (left) The Adoration of the Cross; (right) Madonna and Child surrounded by female saints; (inset) detail of the eyes of St. Lucy (blue dot)

S. Lorenzo houses two fine frescoes by Donato Palmieri. They show the typical elegance of Mannerist paintings with very elongated bodies and elaborate postures. They were painted at a time when the Church was developing rules to be followed to ensure works of art had a proper religious purpose. One of the rules required the saints to be portrayed with a clear reference to their martyrdom (see a page on the iconography of the saints). Donato Palmieri had to comply with this rule, but as he did not want to disturb the serenity of his Madonna, he placed the severed breasts of St. Agatha in the lower part of the painting (see the icon of this page) and he almost hid the tray with the eyes of St. Lucy. 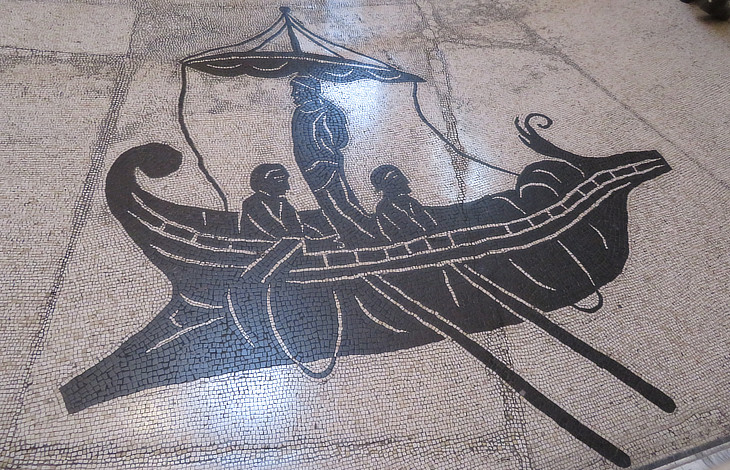 Mosaic found at Sacrofano, near Formello, depicting Ulysses tied to the mast of his ship, now at Sala Rotonda of Museo Pio-Clementino; it is very similar to a mosaic which was found at Tor Marancia; it refers to a famous episode of the Odyssey