Gradoli, Grotte, Capodimonte and Marta
(Tower at Marta before a recent restoration)

For a historical background on the Duchy of Castro see page one. 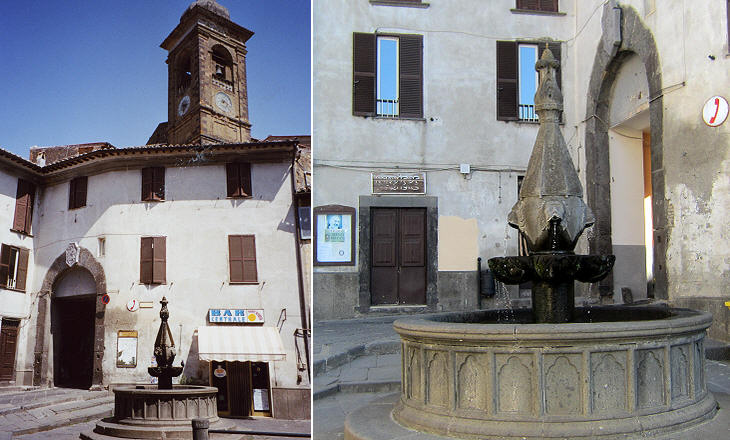 (left) Main gate; (right) detail of the fountain which resembles those of Viterbo

Similar to other small towns of the region, Gradoli was founded in ca 1000 on a hill protected by a ravine which made it easily defensible. Gradoli was controlled by Orvieto and it was not until the XIVth century that Cardinal Albornoz was able to restore papal authority in the region.

The Farnese acquired some rights to Gradoli during the XVth century and in 1513 Pope Leo X formally assigned the town to Cardinal Alessandro Farnese seniore who had supported his election. In that same year Cardinal Farnese arranged the marriage of Pier Luigi, his eldest son, to Gerolama Orsini who belonged to one of the most ancient Roman families. Cardinal Farnese decided to build a stately palace at Gradoli for the couple and he commissioned its design to Antonio da Sangallo the Younger. At the time of the actual marriage in 1519 the palace was not yet ready and the couple set their residence at Valentano.
The church near the palace was redesigned in the XVIIIth century after the previous one was damaged by fire. In 1534 Cardinal Farnese became Pope Paul III and he managed to appoint Pier Luigi Duke of Castro in 1537 and Duke of Parma in 1545. The palace at Gradoli was used as the summer residence by the Pope himself and by other members of the Farnese family. Today it houses the town hall of Gradoli and a small museum about the Farnese.

Coats of arms of the Farnese associated with heraldic symbols of the Orsini (five petal rose) and of the Aldobrandini (stars and stripes) because in 1600 Ranuccio I Farnese Duke of Castro married Margherita Aldobrandini, a relative of Clement VIII, the reigning pope

Grotte is a small town to the north of Gradoli which was acquired by the Farnese in 1537. Its name means caves and it is a reference to the fact that its first inhabitants lived in houses cut into the rock. This was not unusual as it occurred in many other locations throughout Latium. Eventually during the Farnese government living conditions improved and a large church was erected on the site of the old settlement. 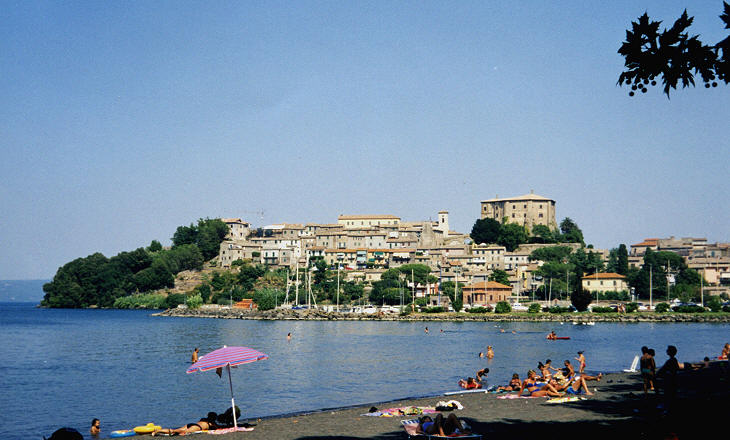 Today Lake Bolsena (named after the town on the eastern side of the lake) attracts sunbathers from all of Europe, but in the XIXth century its shores were renowned for malaria. This was due to a rise in the water level in the XVIIIth century which caused several marshes, a very favourable environment for the mosquitoes which spread the disease.

Capodimonte (Mountain Cape) stands on a small promontory on the south-western coast of Lake Bolsena. Similar to Gradoli it was acquired by the Farnese in the XVth century. The access to the small town which stood on the very tip of the promontory was protected by walls and towers. 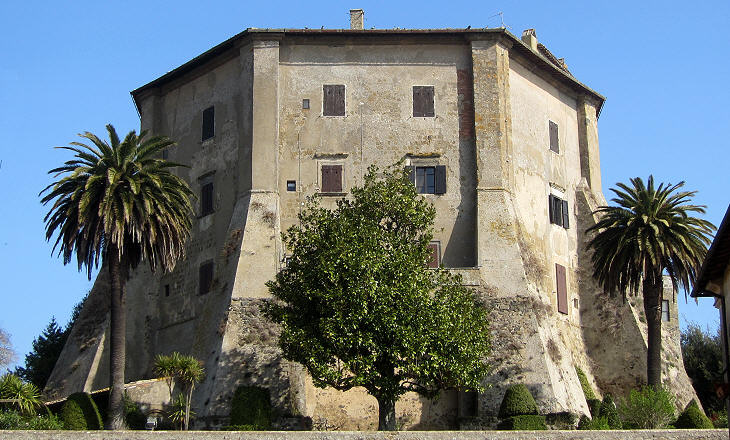 The fortifications of Capodimonte included a small octagonal castle which was redesigned by Antonio da Sangallo and where the Farnese entertained their guests including Pope Gregory XIII. The building was bought in 1805 by a local wealthy family to whom it still belongs.
The image used as background for this page shows the Farnese fleur-de-lys and the Orsini rose on the portal of the parish church of Capodimonte. 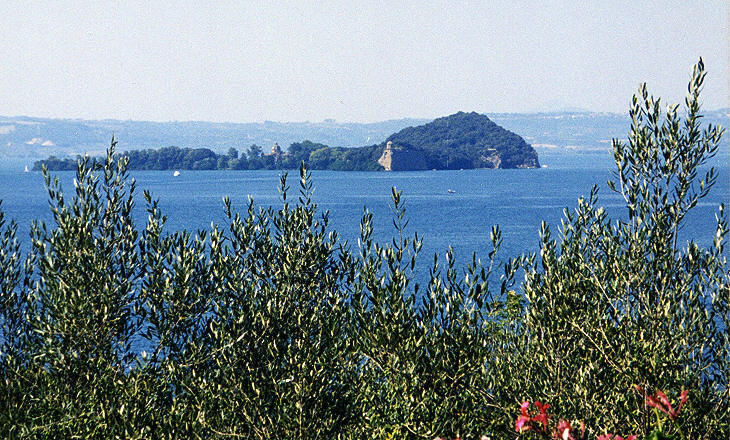 Bisentium was a town to the west of Capodimonte which was completely abandoned at the beginning of the XIXth century because of malaria. It gave its name to a small island which stood opposite it. Some historians believe that a horrible underground prison for heretics referred to by Dante (Paradiso - Canto IX) was situated on the island. The Farnese disregarded this sinister memory and built yet another palace there together with a series of funerary chapels. 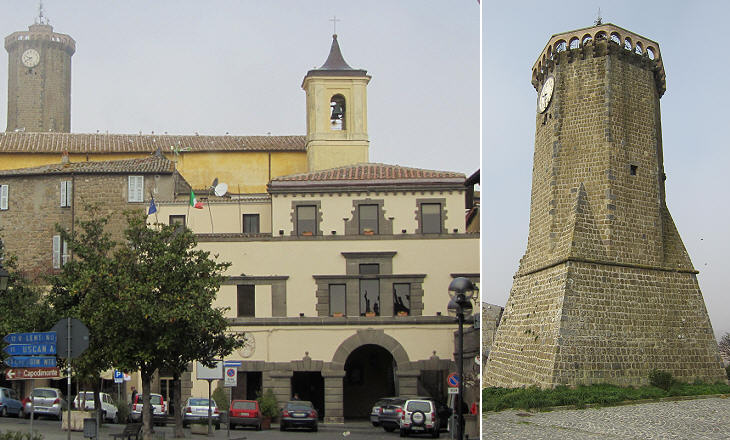 Marta was the easternmost possession of the Farnese along the shores of Lake Bolsena as Pope Paul III vainly tried to acquire nearby Montefiascone which would have given him control over Via Cassia, the route to Rome from the north. The (much restored) Farnese Palace gave access to the small town which was protected by a high XIVth century tower. The name applies also to the river which flows out of the lake and enters the Tyrrhenian Sea near Corneto (Tarquinia). 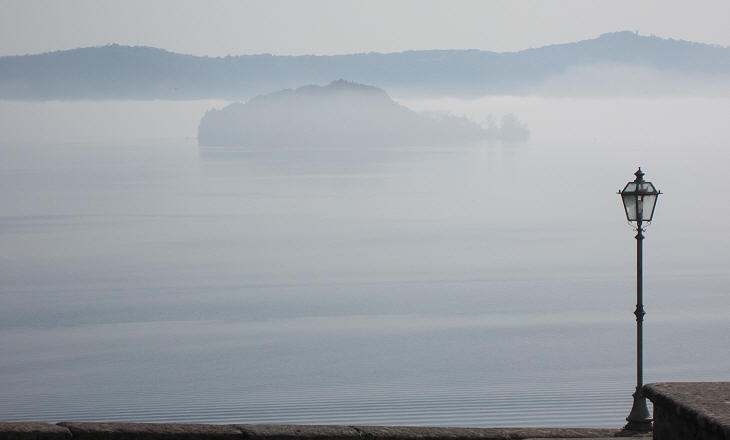 Through the mist of the past: Isola Martana seen from Marta

In the smaller island, Martana, may be seen the staircase which led to the bath where the Gothic Queen Amalasuntha was strangled by her cousin Theodatus.
Augustus J. C. Hare - Days near Rome - 1875
Marta gave its name to a small island which is associated with the death of Amalasuntha, daughter of Theodoric, Ostrogothic King of Italy. After the death of her father she reigned in the name of her young son Athalaric. At the death of the latter she tried to continue in her own name, but she was forced to associate her cousin to the throne. She was charged with plotting with Byzantine Emperor Justinian and imprisoned on Isola Martana where she was strangled a few months after. The killing of Amalasuntha started the Greek-Gothic War. 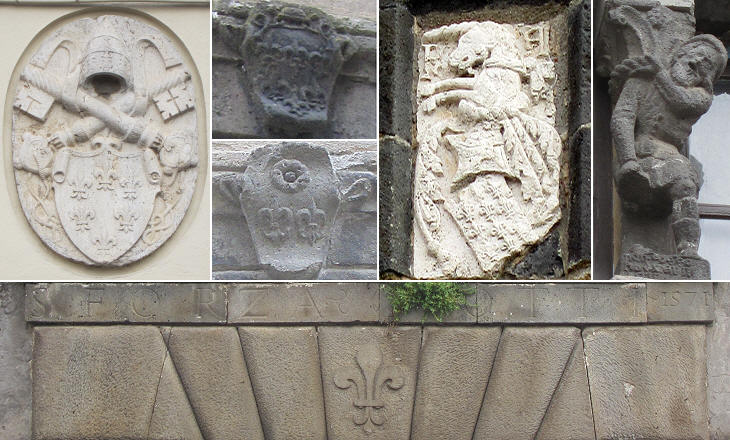 Various coats of arms of the Farnese in buildings of Marta, some of which are associated with heraldic symbols of the Orsini and an inscription of the Sforza (a daughter of Pope Paul III married a Sforza di Santa Fiora; their heirs added the Farnese fleur-de-lys to their heraldic symbols - see Palazzo Sforza at nearby Proceno)

Return to page one: Farnese, Ischia, Cellere and Valentano