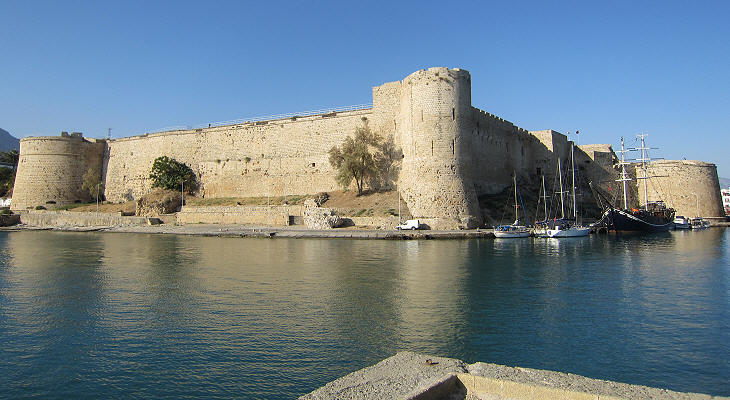 (November 1738) Gerines. We went about three miles to a ruined port called Gerines, which is the antient Cerynia; (..) the old town might extend further east beyond the present square fort, which is about a quarter of a mile in circumference.
Richard Pococke - A Description of the East and Some Other Countries - 1745
Cerines (today's Kyrenia/Girne) is situated on the northern coast of Cyprus; it is not very far from Famagusta as the crow flies, but between the two ports there is the so-called "pan handle", the Karpas Peninsula which stretches for fifty miles in a north-eastern direction. During the Franco-Venetian rule of the island (1192-1571) while Famagusta was perfectly located for ships sailing eastwards to Laiazzo, Tortosa and Tyre, Cerines and nearby Lapithos were the ports of Cyprus for ships coming from Candia (Crete), a Venetian possession, and Rhodes. 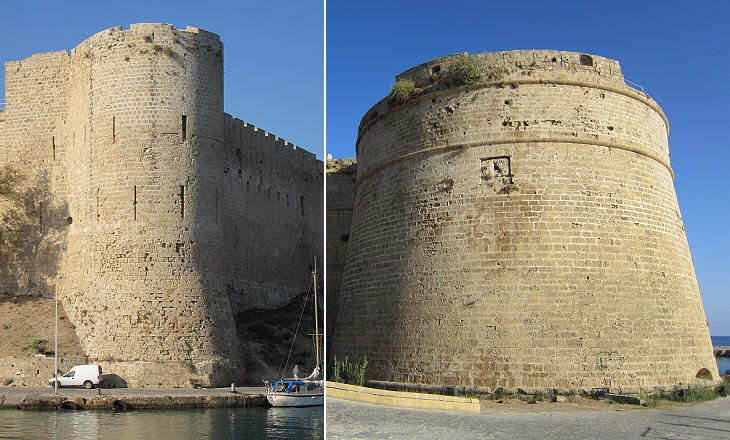 The fortress: (left) Lusignan Tower; (right) south-eastern bastion (on the side of the ancient harbour)

The fortress is clearly made up of two different parts; the old one was built by the Lusignan Kings of Cyprus who enlarged an existing Byzantine castle. It retains the embrasures from which archers threw arrows on the assailants and it is located nearer to the ancient harbour (to its east) than to the medieval one (to its west). The Venetians built two circular bastions at the ends of the medieval section. They projected from the walls so that cannon on their battlements could fire on the enemy from a flanking position. The Venetians enlarged the fortress on its western side by incorporating parts of the medieval town. 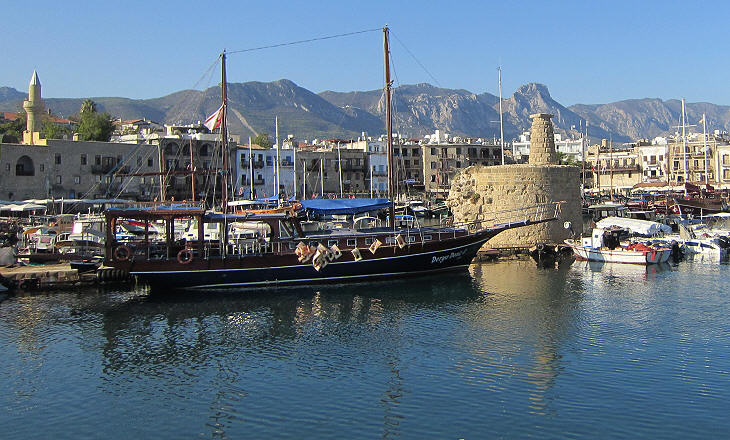 Tower of the Chain and above it the Castle of St. Hilarion

A tower stood at the opposite end of the harbour; in case of danger a chain between the fortress and the tower was raised to block hostile ships. This mean of defence was commonly used by the Venetians (e.g. at Famagusta), by the Genoese (e.g. on the Bosporus), by the Ottomans (e.g. at Nauplia) and before them by the Arabs (e.g. at Mahdia) and by the Carthaginians at Carthage. 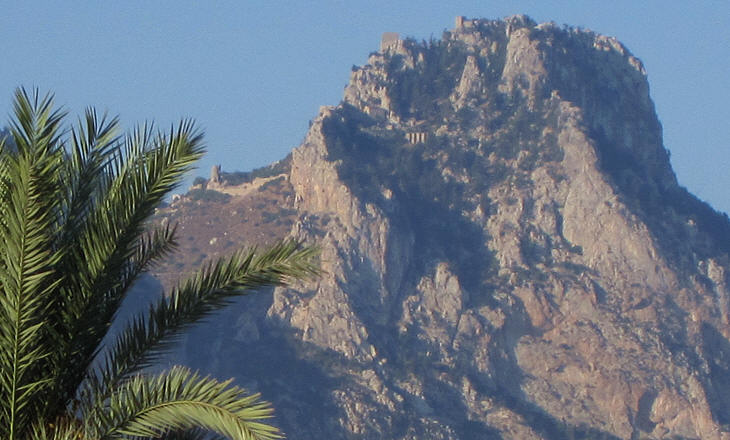 The ruined Castle of Hilarion is a particularly interesting and perhaps unique example of a "chateau fort " built as a royal residence, and completely abandoned since the close of the Middle Ages. Such a monument illustrating the mode of life of medieval royalty, untouched by subsequent alterations, would be difficult to find in Europe. Here we have the most interesting of souvenirs of the once famous Royal House of Cyprus and Jerusalem. It is associated with the legend of a shepherd who enters a doorway and finds himself in an enchanted garden where he passes years, coming back to life at sunrise on a dewy morning. According to another legend it housed the treasury of a queen which attracted the cupidity of the ignorant peasant to the undoing of much of the old ruins.
From George Jeffery - A Description of the Historic Monuments of Cyprus - 1918.
The castle was in part dismantled by the Venetians before the 1570 Ottoman invasion of the island as they did at other locations which they were unable to defend. 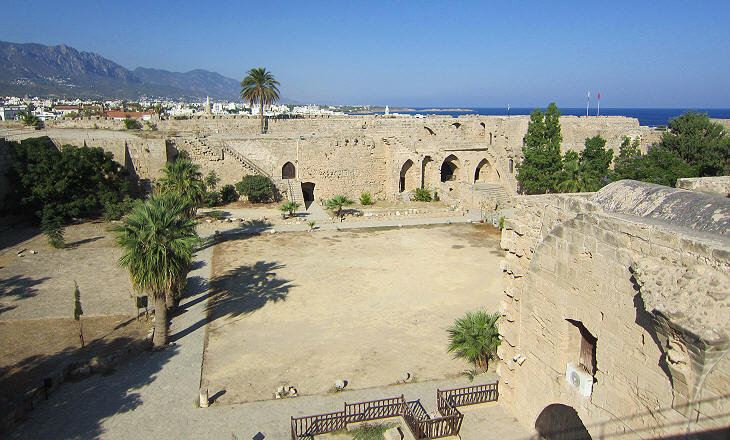 Interior of the fortress

The fortress has a square shape and on one side it retains traces of the royal apartments where occasionally the Lusignans resided. A survey made by Venetian military engineers prior to the Ottoman invasion concluded that the fortress, notwithstanding its new round bastions, was not up to the standards of other Venetian fortifications and suggested it ought to be abandoned. 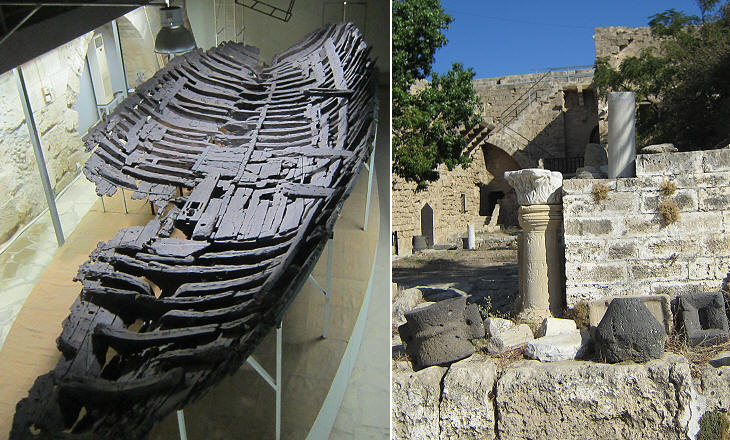 To the west of the town there are a great number of sepulchral grots, and I saw some pillars standing, and remains of the foundations of an antient building. Pococke
Today the fortress houses a very interesting shipwreck of the IIIrd century BC which carried wine, olive oil and almonds. It was found in 1967 on the northern coast of the island. A series of ancient inscriptions, columns, capitals and millstones are scattered here and there in the vast courtyard, with no references to the locations where they were found. 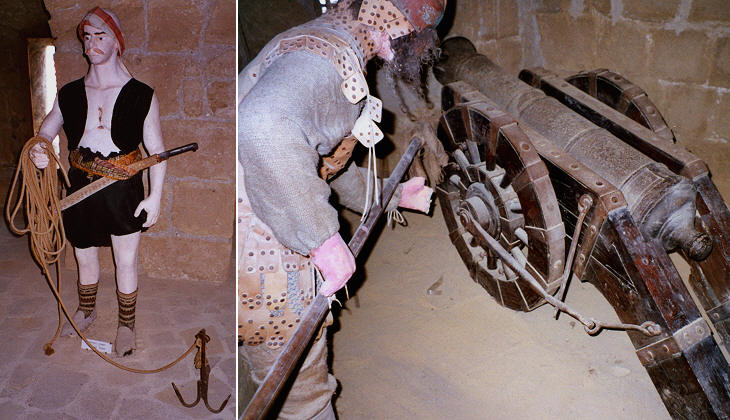 For a long time the fortress was used as a prison by the Ottomans and after them by the British administration. Today the Lusignan Tower houses a small War Museum mainly consisting of dummies; among other exhibits it displays a dummy of an Ottoman soldier equipped for the final assault on a fortress. This was launched after artillery fire and sappers had damaged the walls. The success of the assault depended upon the number and nimbleness of the assailants, who were subject to extremely heavy losses. 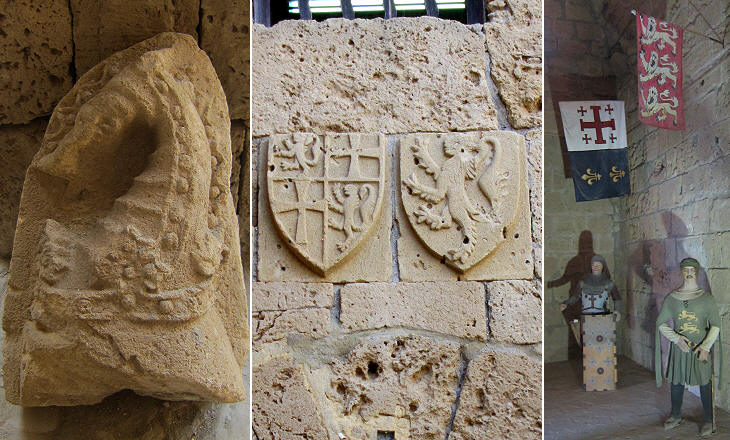 A relief of the Lusignan period; (centre) coats of arms perhaps of the Ibelin-Lusignan: (according to local guides they were placed outside the fortress and they belonged to the Lusignan Kings of Cyprus, four of whom married ladies of the house of Ibelin; for a comparison see the coats of arms at Bellapais); (right) soldiers of King Richard I of England (who conquered Cyprus in 1191) and of Guy de Lusignan

The fortress of Cirenes was the site of a dramatic siege which lasted three years and sprang from a dynastic quarrel between Charlotte of Cyprus, wife of Louis of Savoy, Count of Geneva, and her half-brother James II. Eventually in 1463 Charlotte was forced to flee the island and repair to Rome; in 1485, in return for a pension she ceded her rights to Charles I, Duke of Savoy; because of this when in 1861 Victor Emmanuel II of Savoy became King of Italy the official endorsement of the Italian Parliament made reference to him as King of Sardinia, Cyprus and Jerusalem. 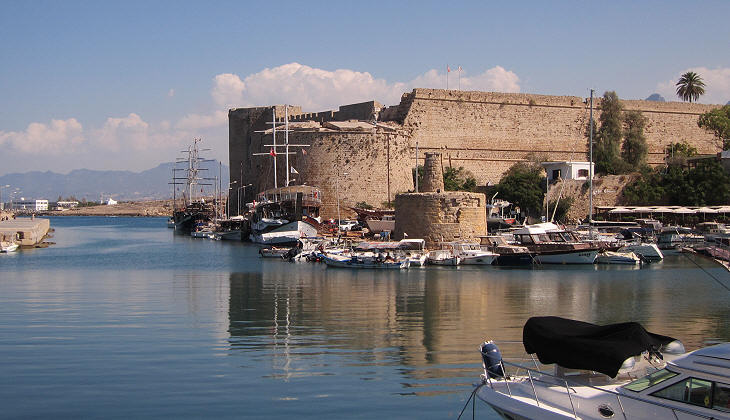 The fortress seen from the medieval harbour

Though this place is esteemed to be very strong, yet the Venetian governor, when the Turks were marching towards it, (after they had taken Nicosia) shamefully surrendered the fort, before the enemy laid siege to it. Pococke
The fortress was and is extremely imposing and apparently able to withstand a long siege, however when Lala Mustafa Pacha, the commander of the Ottoman army which invaded Cyprus in 1570, after having conquered Nicosia, turned his attention to Cerines, the Venetian commander preferred to surrender; according to some chronicles he could rely on just fifty soldiers. 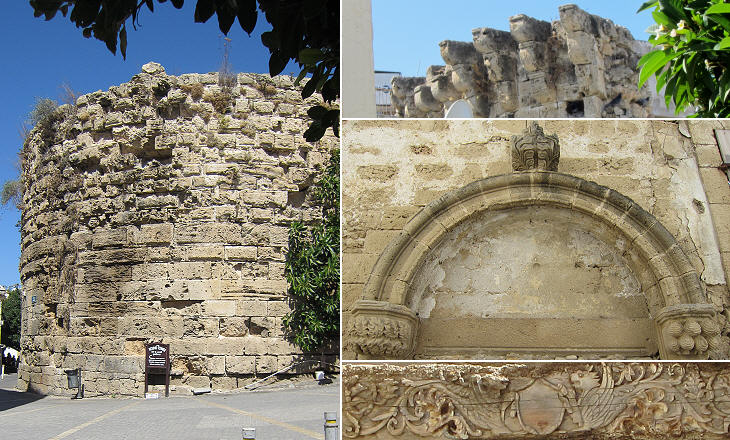 (left) Round tower of the walls of the town; (right-above) top section of a tower with machicolations (openings from which stones or burning objects were dropped on attackers); (right-below) portal and wooden panel of Agia Chrysopolitissa

The ruined walls are about half a mile in circumference, and seem to be on the foundation of the antient walls. (..) There is one church in the town, which is entire, and two or three in ruins; the priest resides in a convent of Solea, there being not above five or six Christian families in the place. Pococke
In the Middle Ages the town was probably rather large. Its size was reduced by the enlargement of the fortress. It was protected by walls which the Venetians did not care to modify; a massive round tower protected the south-west angle of the old town. Agia Chrysopolitissa, a now abandoned church, was built in the XVIIIth century making use of elements of Lusignan buildings. 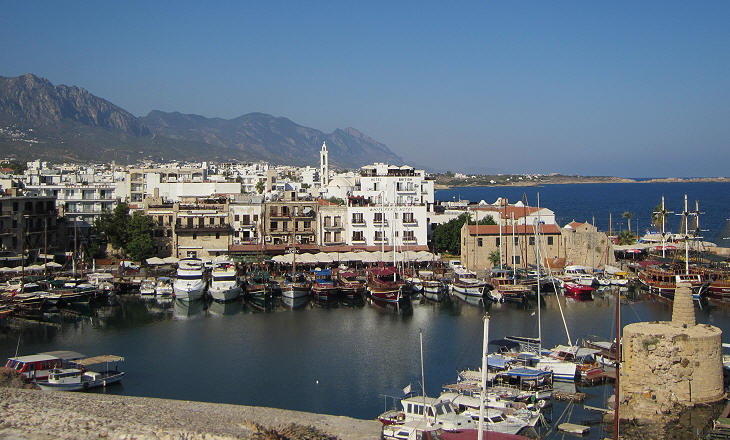 The chief trade here is with Selefki in Caramania, which is the antient Seleucia in Cilicia; the commerce is carried on by two small French vessels, which export rice and coffee to that part, which is brought to Cyprus from Egypt; and they bring back a great number of passengers: They also sometimes go over to Satalia, the antient Attalia in Pamphylia; but Selefki is the nearest place to this part of the island, being only thirty leagues off. Pococke

Move to other pages of this section:
Famagusta - The Walls
Famagusta - Main Churches
Famagusta - Other Monuments
Nicosia - Walls and Houses
Nicosia - Churches and Mosques
An Excursion to Bellapais
Larnaca
or see some castles of the Crusaders in the southern part of Cyprus.