- Roman Corinth
(Columns and lintel from the Temple to Octavia)

Illius vero Romanae liberalitatis caelestem spiritum nullae litterae satis dignis laudibus prosequentur: Philippo enim Macedoniae rege superato, cum ad Isthmicum spectaculum tota Graecia convenisset, T. Quintius Flamininus tubae signo silentio facto per praeconem haec verba recitari iussit: 'S. P. Q. R. et T. Quintius Flamininus imperator omnes Graeciae urbes, quae sub dicione Philippi regis fuerunt, liberas atque inmunes esse iubet.' Quibus auditis maximo et inopinato gaudio homines perculsi primo veluti non audisse se quae audierant credentes obticuerunt. Iterata deinde pronuntiatione praeconis tanta caelum clamoris alacritate conpleverunt, ut certe constet aves, quae superuolabant, adtonitas paventesque decidisse.
"In truth, no literary work could give the heavenly spirit of Roman generosity the praise it deserves. After the defeat of Philip, King of Macedonia, when all of Greece was gathered together for the Isthmian Games, a trumpet gave the sign for everyone to be silent, and Titus Quintius Flamininus ordered a herald to read out the following proclamation: The Senate and the people of Rome, and their general Titus Quintius Flamininus, order that all the cities of Greece that were under the rule of King Philip should be free and pay no tribute. When they heard these words, the people were overwhelmed by their great and unexpected joy, and at first they did not make a sound, not being able to believe that they had really heard those words. But when the herald repeated the proclamation, they filled the heavens with loud, joyous shouts, and it is a well-established fact that the birds flying overhead were so astonished that they fell from the sky in terror." (Valerius Maximus - Factorum et Dictorum Memorabilium (Memorable Deeds and Sayings) Book IV - 4.8.5 - Generosity - Translation by Henry John Walker) 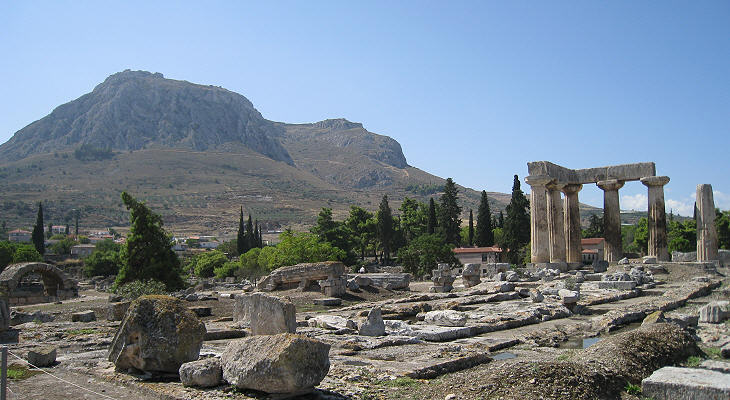 Temple to Apollo and Acrocorinth

The Isthmian Games were held every two years in Corinth, a very wealthy city near the isthmus linking mainland Greece with Peloponnesus. They did not coincide with the cycle of the Olympic Games which recurred every four years.
The honeymoon between the Romans and the Greek world which was announced by Consul Titus Quintius Flamininus in 196 BC at the Isthmian Games lasted only fifty years: in 146 BC Consul Lucius Mummius defeated the army of the Achean League, a Confederation of Greek city states, and conquered Corinth; the pressure of the Roman mercantile society and of some of the Roman allies (including the King of Pergamum) led Mummius to raze to the ground Corinth and to sell its works of arts and its inhabitants. Only the ancient temple to Apollo with its Doric columns was spared. 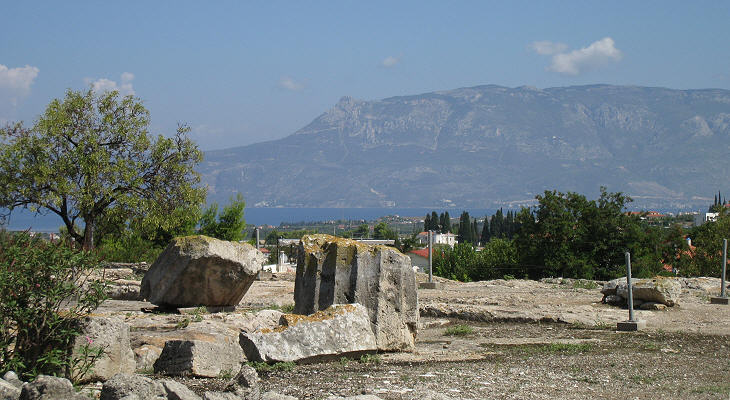 The Gulf of Corinth seen from the Temple to Apollo

The wealth of Ancient Corinth was due to its being located at the end of a deep gulf of the Ionian Sea; only six miles (Examilion) of land separated this sea from the Aegean one. At a time when travelling by sea was by far more effective than travelling by land, this position helped the city in becoming a major trading centre; the Corinthians sent settlers to found colonies at Corfu and in Sicily to develop new markets.
Corinth gave its name to an elaborate design of capitals. 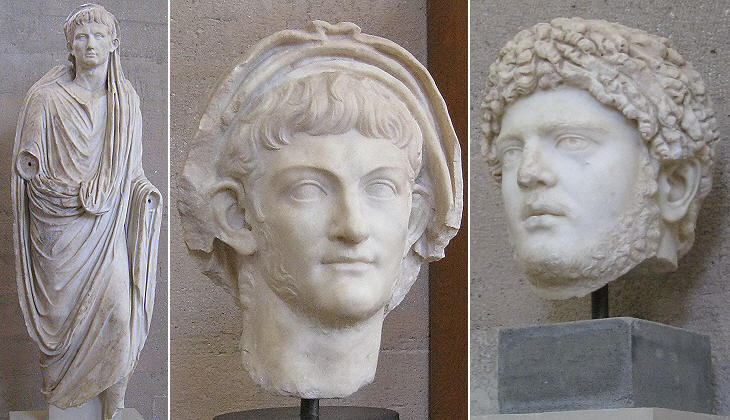 Eventually the advantage of reviving Corinth for the development of trade was acknowledged by the Romans and in 44 BC Julius Caesar re-established the city; some forty years later a new cycle of Isthmian Games began, a sign that Corinth had regained its past role and wealth.
In 67 AD Emperor Nero attended the games and he re-enacted the speech of Consul Titus Quintius Flamininus by announcing that Greeks would be exempted from taxation; he also announced that the work of cutting a canal through the isthmus (an enterprise which had been attempted by others earlier) was going to start immediately; raising a golden pick the emperor made the first cut. The work, however, stopped after his death. The Corinthians retained a positive image of Nero and the Museum of the archaeological site retains a rather rare portrait of him.

The wealth of Corinth did not rely solely on its trading activities. Its acropolis housed a sanctuary dedicated to Aphrodite, which was famous for its priestesses who practised a form of sacred prostitution; their fees were so high that the Romans had a say Non licet omnibus adire Corinthum to explain that not everybody could afford to pay them. The rites performed at the sanctuary were thought to have healing effects on many diseases; the many ex-votos which have been found indicate that treatments based on causing strong emotions had a high rate of success.
Greek Corinth was famous for its pottery which was exported all over Greece; Roman Corinth achieved a leading role in the manufacturing of glassware; at that time glassware was a luxury good and an important export item in the trade between the Mediterranean basin and Central and Eastern Asia; Byzantines and Venetians continued this tradition. 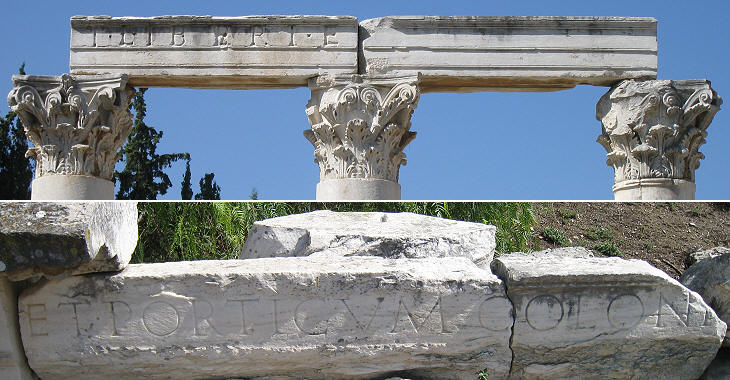 Latin inscriptions: (above) Temple to Octavia; (below) Basilica Julia

For the Romans Corinth was the Gateway to Greece (today this role belongs to Patras which is located at the entrance to the Gulf of Corinth) and Latin was widely spoken by its population; this explains the use of this language on almost all the inscriptions on the main buildings and on the many gravestones found outside the city. In other Greek locations such as Eleusis and Athens even the monuments built by Roman emperors had inscriptions in Greek. 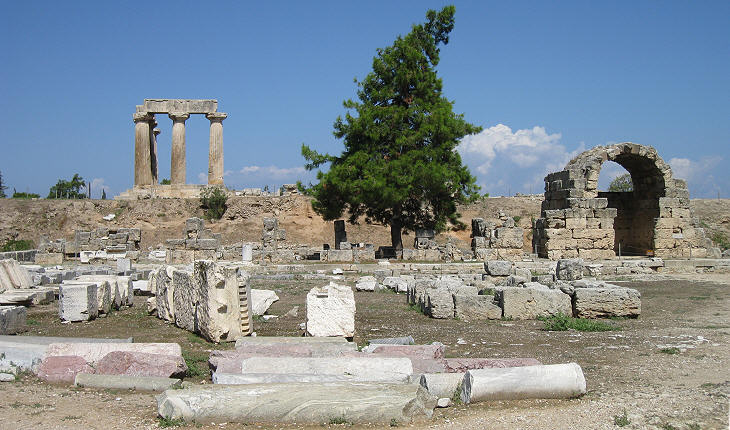 The centre of Roman Corinth was the Forum: it had a rectangular shape and its northern side was closed by a series of vaulted shops; it is possible that they were not ordinary shops, but the offices of shipping agents and other traders, similar to what occurred in Ostia. The variety of coloured columns which can be seen in the Forum indicates that it was renovated and embellished in the IInd and IIIrd century AD when the use of these columns was in fashion; it is also an indication of the city's wealth. 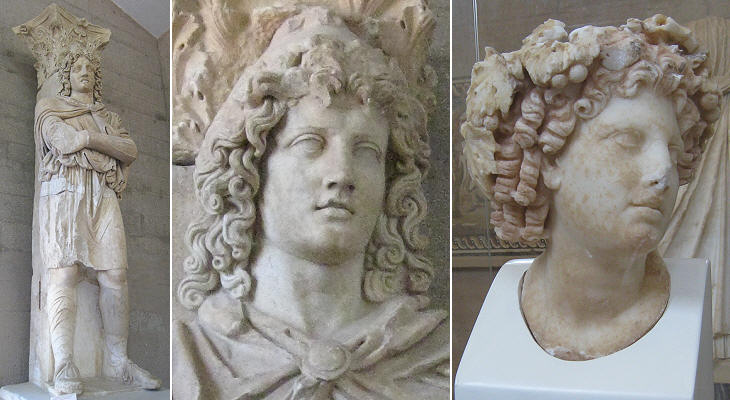 After Emperor Trajan's conquest of Dacia the "Dacian prisoner" became a popular subject of reliefs and statues celebrating the victories of the emperors, regardless of the actual enemy they had defeated. The "Dacian prisoner" was usually portrayed as a mature man with a beard, but in Corinth this iconography was combined with the Greek ideal of beauty (according to others the telamons portray Castor and Pollux). The Museum of Corinth houses several excellent works of art of the Roman period. 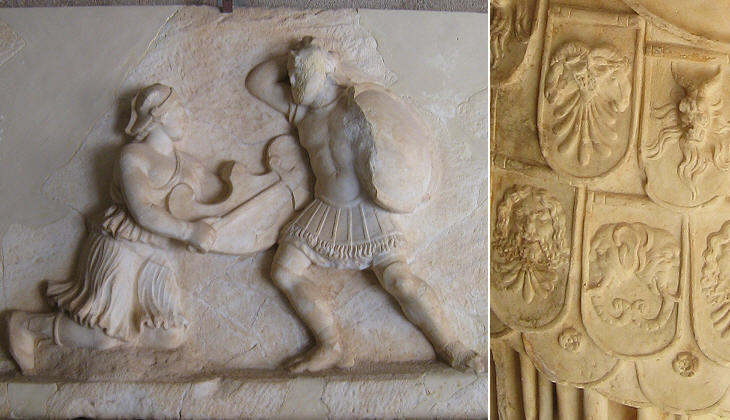 Museum of Corinth: (left) Relief portraying a fight with an Amazon; (right) detail of the armour of an emperor

The fight between the Athenians led by Theseus and the Amazons was a preferred subject for reliefs, but the intent of the IInd century relief shown above was almost didactic: to show the military equipment used by the fighters; in particular the artist drew attention to the pelta, the Amazon's shield which resembled a crescent (the Amazons worshipped the Moon). The Romans were fascinated by the shape of this shield and many Roman mosaics are decorated with motifs based on it; Emperor Domitian commissioned the design of a fountain showing four pelta for his Domus Flavia.
Roman emperors had a grand uniform they wore only in ... statues. In Augustus of Prima Porta the emperor was portrayed wearing a very elaborate and decorated armour; his successors followed his example and wanted their armours to be more and more decorated to convey to the viewer a long series of messages; animal heads were probably a reference to the emperor's qualities and skills. 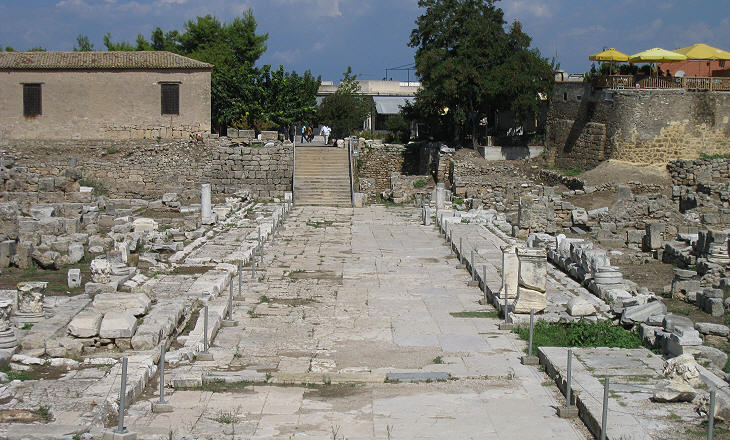 Lechaion, road leading to Lechao, the harbour on the Corinthian Gulf

The centre of Corinth was built inland and it was linked to the harbour by a road which in its initial section was flanked by columns and large buildings. The city had a second harbour on the Aegean Sea and goods were transferred from one to the other port through a trackway which in case of need, especially during wars, could also be used to haul ships.

Corinth had three fountains originating from local springs: the water of the Peirene fountain was thought to inspire poets; over the centuries these springs became underground springs so Emperor Hadrian commissioned an aqueduct to provide Corinth with an adequate supply of water.
The Swan Boats are a fleet of pleasure boats operating on the Boston Public Garden pond. The boats have been operating since the 1870s, and have become a cultural icon for the city of Boston. They operate from April until September. Robert Paget created the first swan boats in 1877, reputedly inspired by Wagner's Lohengrin. (from wikipedia). Or maybe Robert Paget visited Ancient Corinth and took inspiration from the above relief. 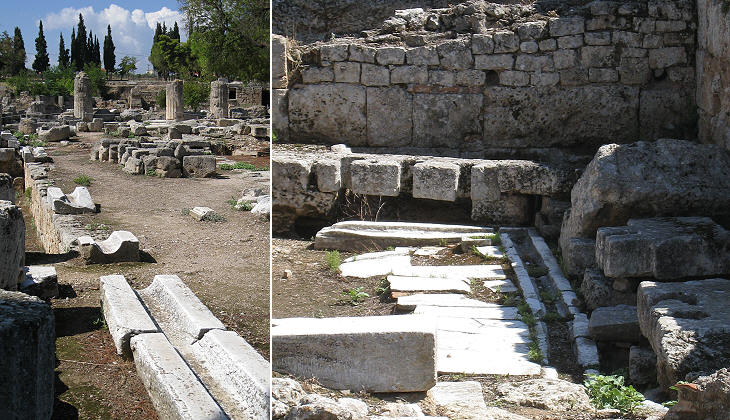 Roman Corinth had advanced drainage and its baths were provided with public toilets having a flushing system. It appears that the Romans had a concept of decency which did not condemn the performing of certain natural functions in the presence of other members of the same sex.

Detail of a Roman mosaic

The use of acanthus leaves arranged as a scroll is a decorative motif which was widely used in classical architecture; during the last centuries of the Roman Empire friezes based on this motif became "inhabited" by the insertion of a person, an animal or a flower in each scroll. 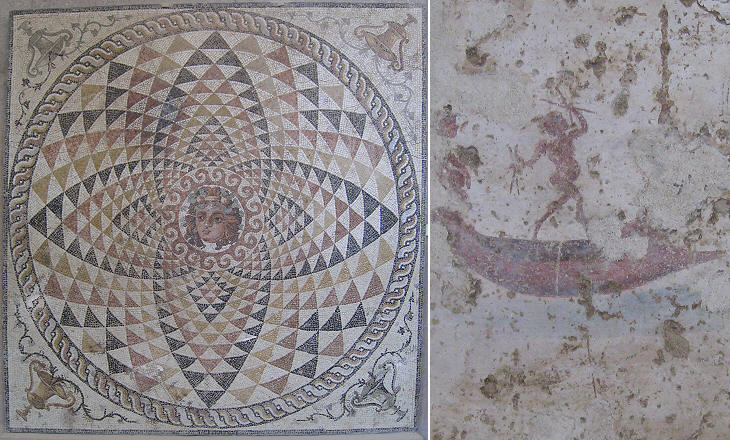 Optical art is a genre of art which flourished in the 1960s and which was based on the effect of optical illusions; yet nihil novi sub soli (there is nothing new under the sun) and the unknown artist who decorated a Corinthian home created the impression of a moving vortex in his mosaic.
Mural paintings were widely employed in the decoration of Roman houses, as one can see in Pompeii, but the circumstances which preserved them in that town were exceptional and did not occur elsewhere. In Corinth only a few fragments of mural paintings have been found; they are of the genre called grotesque with small human figures portrayed in unusual postures and with no background. 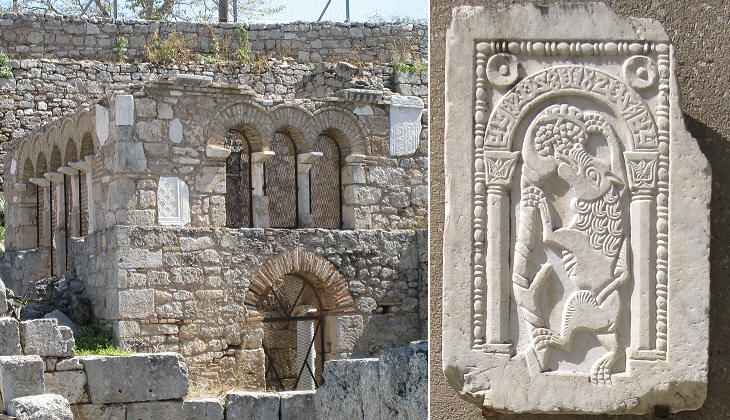 The prosperity of Corinth was based on a stable political environment; when the unity of the Roman Empire collapsed trade with Italy declined and later on the Arab invasion of all the Byzantine possessions in Africa cut other trading routes. The general lack of security led the inhabitants of Corinth to seek refuge in Acrocorinth and the Lower City was almost abandoned; earthquakes contributed to the progressive disappearance of the main buildings; only a few columns of the Temple to Apollo continued to signal the existence of the ancient monuments.