- The Ancient Town
(mosaic in the Umayyad Mosque)

Damascus is located some twenty miles east of the Anti-Lebanon mountains which mark the border between Syria and Lebanon; this range with peaks of over 10,000 ft. intercepts precipitations from the Mediterranean Sea so that the region of Damascus is subject to periods of drought (this seems to occur more frequently today than it did in the past); however this negative aspect is in part mitigated by streams which originate from the snow which accumulates in winter on the highest mountains. 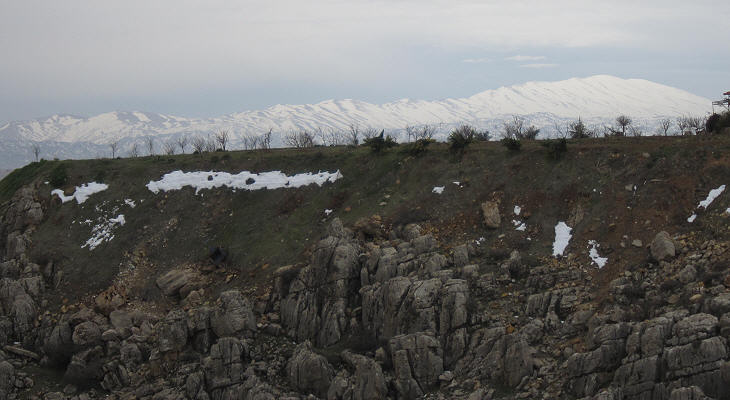 At a village called Dummar, about a league and a half from Damascus we crossed the Barrady on a bridge; from this village we went over a high hill, from which there is a glorious prospect of Damascus, and of the country about it. One sees the Barrady dividing into many streams, coming from between the hills, and running to the city through the fine field of Damascus, which appeared more beautiful, as the pasha's army, with their beautiful green tents, was encamped at one end of it: This is the place where, they say, Adam was made. On each side of it are gardens and villages, which extend two or three miles to the north, and five or six to the south; this with the view of Damascus itself, and its towers, minarets, and cypress trees growing all over the city higher than the houses makes a most glorious appearance.
Richard Pococke - A Description of the East and Some Other Countries - 1745
Damascus was founded on the southern bank of the Barada River and it was surrounded by Ghouta, an oasis where many vegetables, cereals fruits were farmed since the most ancient times; maps of Roman Syria indicate that the Barada emptied into a lake of some size east of Damascus; today it is called Bahira Atayba, the hesitant lake, because in years of severe drought it does not even materialize. 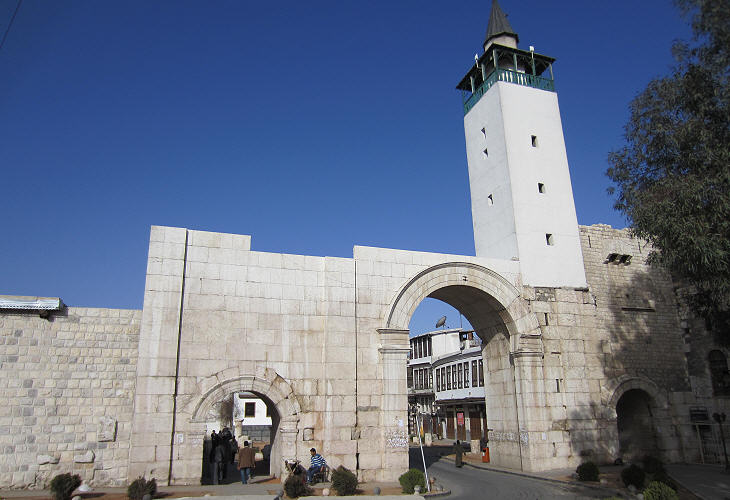 This city is of great antiquity, being, without doubt, at least as old as the time of Abraham, in whose history it is mentioned, tho' it may be doubted very much whether he was the founder of it. Pococke
There are references to Damascus in the Bible and in Egyptian and Assyrian inscriptions, but the town was entirely redesigned by the Romans after Pompey conquered the region in 64-63 BC. The Old Town of Damascus has retained the almost rectangular shape of the Roman one with the Decumanus (east-west axis) twice as long as the Cardo (north-south axis). A monumental gate was built at the eastern end of Decumanus Maximus; the design of the gate is similar to Hadrian's Gate at Antalya and to Domitian's Gate at Hierapolis; all were built at a time when defence was not a key issue; the central opening was reserved for carriages while the side openings were utilized by pedestrians.

Bab Sharqui in a modern painting based on an old photograph

The east gate may give one some idea of the magnificence of the antient walls of Damascus: The gateway is about ten feet wide, it is arched over, and adorned with a kind of Doric pilasters. (..) The middle passage being the grand gate for carriages to pass, and those on each side for foot people. Pococke
When security conditions worsened the central and the left openings were closed and until the beginning of the XXth century the gate was limited to the opening near the minaret. 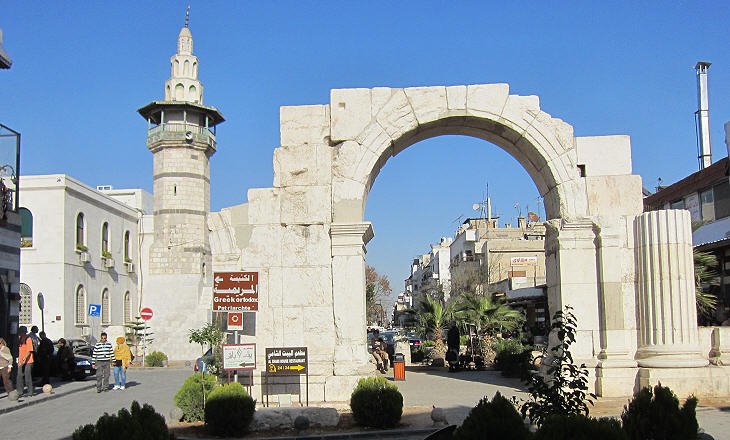 Roman Arch across Via Recta

Decumanus Maximus, the main east-west street of Damascus, was a colonnaded street similar to those of Apamea and Palmyra; today it is known as Via Recta (Straight Street); its intersection with Cardo Maximus, the main north-south street was marked by an arch; today the structure of the Roman town is very evident; it was less so in 1867 when Mark Twain visited Damascus: The street called Straight is straighter than a corkscrew, but not as straight as a rainbow. St. Luke is careful not to commit himself; he does not say it is the street which is straight, but "the street which is called Straight". It is a fine piece of irony; it is the only facetious remark in the Bible, I believe.
In the following years Ottoman authorities pulled down many small dwellings and Via Recta returned to be straight; during the French Mandate (1920-1946) the arch was reconstructed. 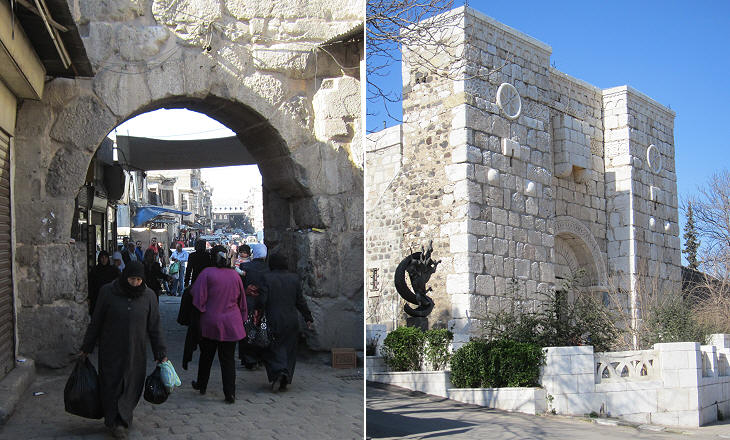 Many of the other Roman gates of Damascus were modified or rebuilt by the Ayyubids and the Mamelukes (see page three), but Bab as-Saghir most likely retains the original Roman opening.
Today Bab Kissan is part of a modern Franciscan monastery; it is the reconstruction of a Mameluke gate built on the site of the Roman one; it houses a chapel and it is decorated with Christian symbols because St. Paul fled Damascus from this gate when the Jews who lived in the nearby quarter threatened to kill him for his heretical teachings. 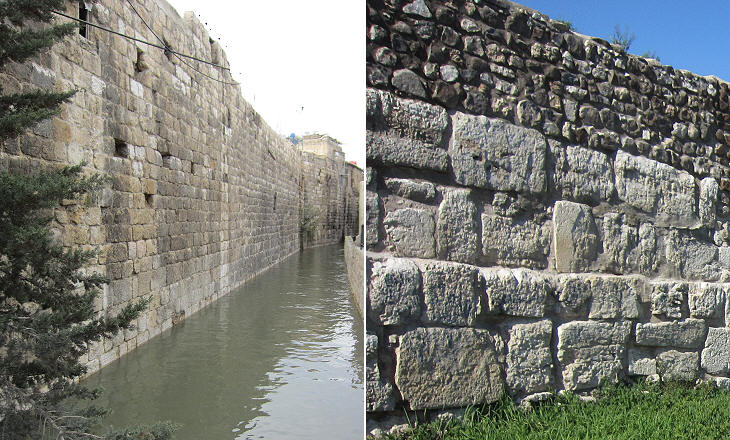 (left) Walls along the Barada River; (right) section of the ancient Roman walls near Bab Kissan

The city of Damascus is encompassed with walls, extending about two miles from east to west, and a mile and a half from north to south; but the suburbs are much larger than the city. (..) The walls of Damascus are probably built on the foundations of the antient walls of the city; for I observed in many places, towards the bottom of them, large stones of rusticated work, different from the other parts. (..) The Barrady, and two or three streams of water that are brought from it, run through several parts of the city. Pococke
The fortifications of Roman Damascus do not appear particularly impressive; the Barada River gave some additional protection to the northern side of the town, but the lack of other natural barriers was not compensated by high walls and towers, although one must realize that the ground level at that time was most likely some ten ft. lower than it is today.
The Ayyubids and the Mamelukes did not strengthen the ancient walls in a significant manner, but built a citadel in the north-western corner of the town. 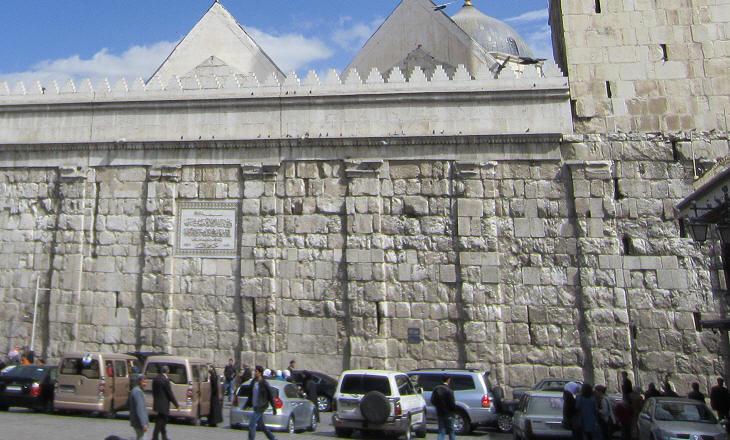 The Romans believed that each site (mountain, river, wood, etc.) had its own deities (genius loci); this approach led them to accept the beliefs of the countries they conquered; in the case of Damascus the main temple was dedicated to Hadad, a Semitic god; for the Romans Hadad became Jupiter Damascenus (of Damascus); they did the same with Ba'al at Baetocece, a sanctuary north of Damascus, and Baalbek. 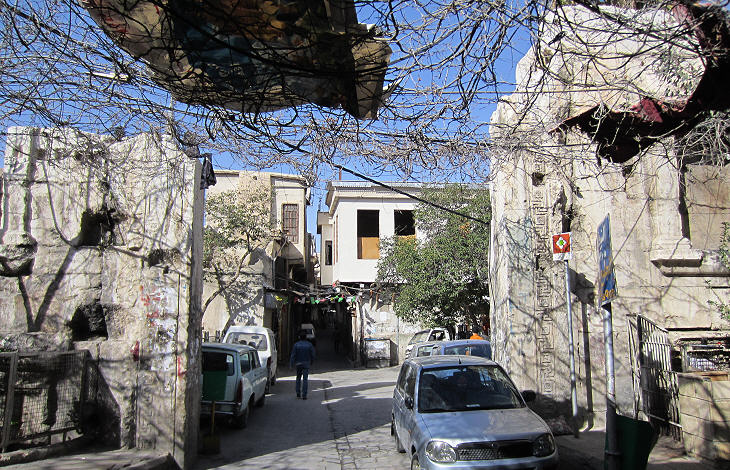 Eastern Propylaeum of the Temple

The importance of religion in the Greek-Roman world was not very significant; it is difficult to remember the name of a high priest in Greek or Roman history; at most the names of a clairvoyant such as Tiresias or an augur (a priest who interpreted the will of the gods) such as Calchas come to mind. Religion played a much greater role in Egypt and in the Near East; this may explain the size of the Temple to Jupiter in Damascus, which is enormous when compared to that of the whole town. It was preceded by two propylaea (entrances) which led to the peribolos, a high wall which surrounded the temenos, the sacred space where the actual temple was located. 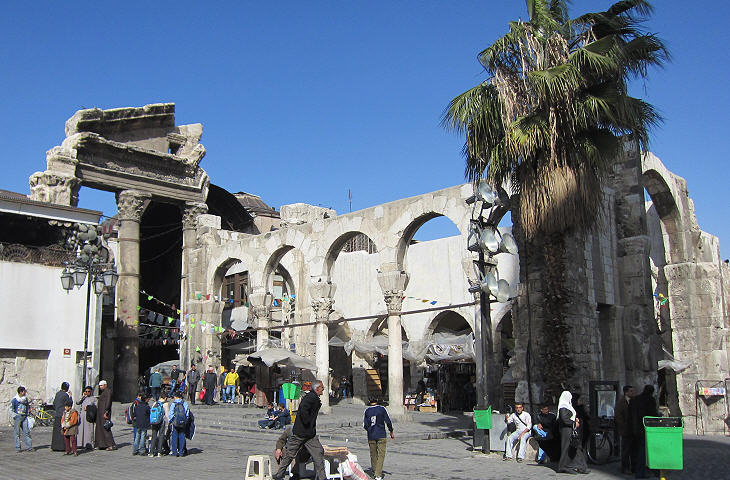 There might be a portico of large pillars round the building; for I saw in the town, at proper distances, remains of some very beautiful door-cafes in the finest taste, and also several pillars. Pococke
The construction of the Temple to Jupiter which replaced a previous sanctuary was started at the time of Emperor Augustus, but it was completed only during the reign of Emperor Septimius Severus. It is evident that the temple was an important sanctuary which attracted believers from the whole Near East. 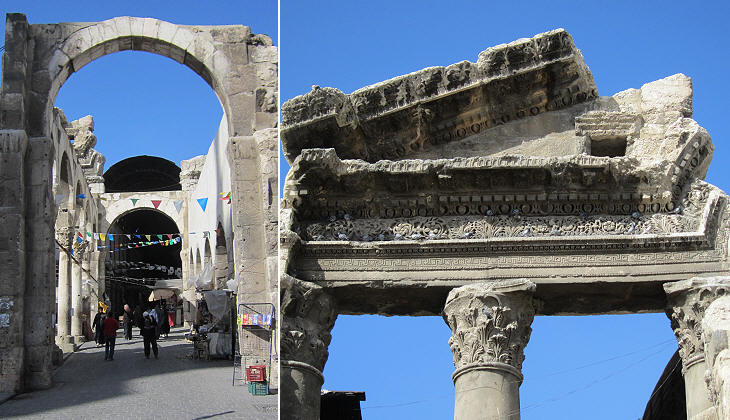 Most likely the temple priests held an important role in the society of Damascus; they could rely on significant donations from the wealthiest citizens; from inscriptions celebrating additions/modifications to the temple it appears that they adopted Greek and Latin names, although ceremonies followed local practices. 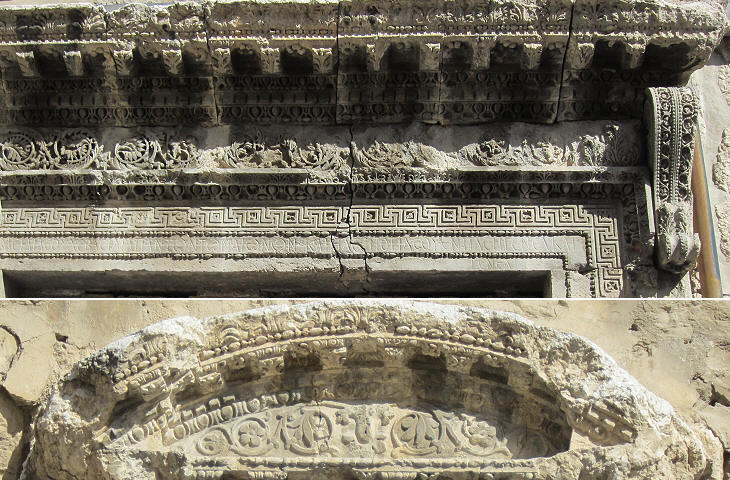 Temple to Jupiter: (above) lintel of the southern entrance to the temple with an inscription stating that it had been turned into a church; (below) detail of a window

Eighteenth century travellers gave the first accounts of the Roman elements which were incorporated into the Umayyad Mosque which was built in the VIIIth century inside the peribolos. They spotted ancient columns between the houses which surrounded the mosque; some of them have since disappeared, but others can still be seen by walking in the neighbourhood north of the mosque. Ancient columns and walls in the neighbourhood near the Umayyad Mosque