along Via Flaminia
(a relief found at Villa di Livia) 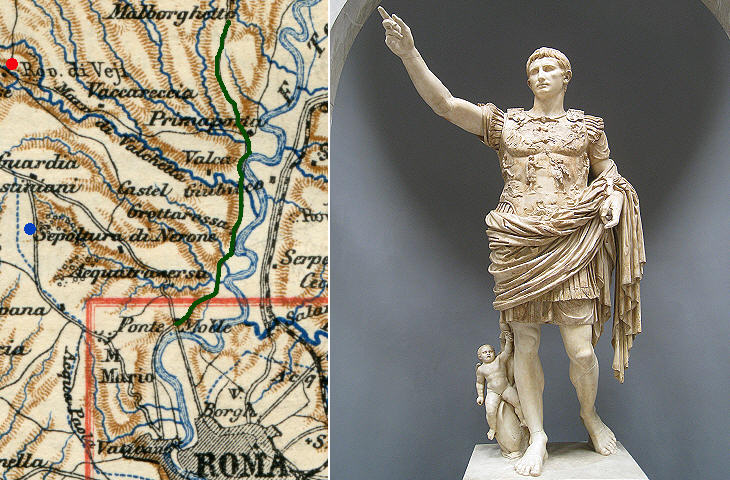 (left) Late XIXth century map: the green line indicates the section of Via Flaminia which is covered in this page; the red dot (the ruins of Veii) and the blue dot (Sepolcro di Nerone, an ancient sarcophagus) are covered in other pages; (right) "Augustus of Prima Porta", a statue found at Villa di Livia, now at Braccio Nuovo

This walk along Via Flaminia starts from Ponte Milvio (aka Ponte Molle) and it ends at Malborghetto, respectively the ending and the starting points of the Battle of Ponte Milvio between Constantine and Maxentius which was fought in 312 AD. 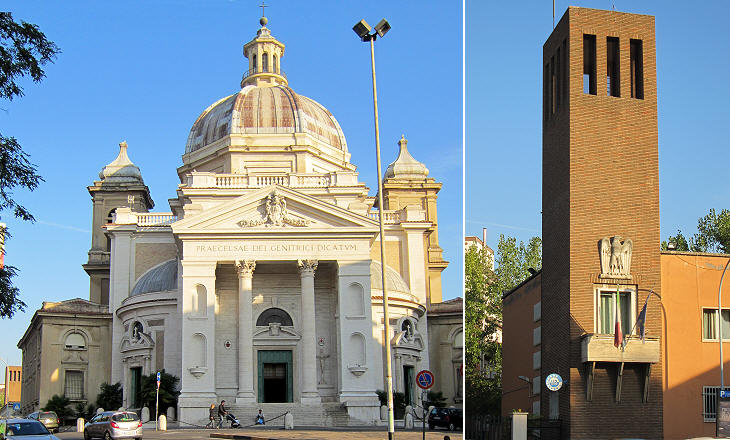 In the Roman Catholic Church Mary is usually referred to as St. Mary, rather than as Mother of God, whereas in the Greek Orthodox Church Theotokos is the usual title and Agia Maria is rarely used.
In 431 a council was held at Ephesus to establish whether Mary should be referred to as Theotokos or Christotokos (Mother of Christ). The latter opinion was supported by Nestorius, Patriarch of Constantinople, who feared that the use of Theotokos could lead to worshipping Mary as a goddess. The Council rejected his views and Nestorius retired to a monastery.
As part of the celebrations held in Rome for the 1500th anniversary of that council, Pope Pius XI promoted the construction of a church to the Mother of God in the square opposite Ponte Milvio, where the Christian Faith/Constantine defeated Paganism/Maxentius.
The monumental church was designed by Cesare Bazzani, an architect best known for Galleria d'Arte Moderna, and Clemente Busiri Vici in a mixture of styles. At a few hundred yards from the church another building shows that in the same period some young Italian architects were developing new "rationalist" patterns (see a page on E.U.R., a new development designed according to these new patterns). 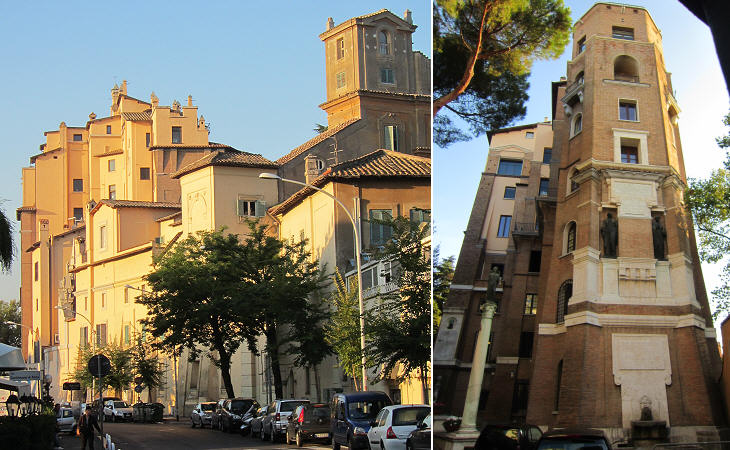 (left) The series of buildings making up Villa Brasini; (right) the tower at the main entrance

Armando Brasini (1879-1965) was an architect who was very highly regarded by the Fascist government (1922-1943) for his monumental buildings where he mixed various styles with results which are considered rather poor by today's art historians.
He built a large villa for himself on a hill next to Ponte Milvio and to a bridge he had designed. The villa is adjoined by apartment blocks which give the complex the overall shape of a castle, to the point that the locals call it il Castellaccio (the Ugly Castle). 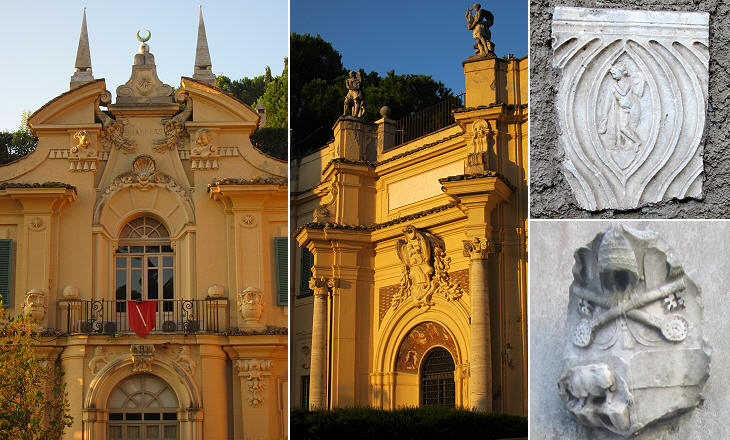 (left/centre) Details of the main courtyard; (right-above) an ancient relief on a sarcophagus; (right-below) a coat of arms of Pope Alexander VI

The internal courtyards of the villa show that Brasini had an unexpected penchant for XVIIth century architecture which was despised by Fascism as a sign of Italy's decline after the Renaissance.
Brasini supervised the pulling down of old buildings which were promoted in the 1930s to enhance spectacular views of the Colosseo, Mausoleo di Augusto, Teatro di Marcello, etc. He was allowed to collect some reliefs and fragments of statues which were found during these clearances and he decorated his villa with them. 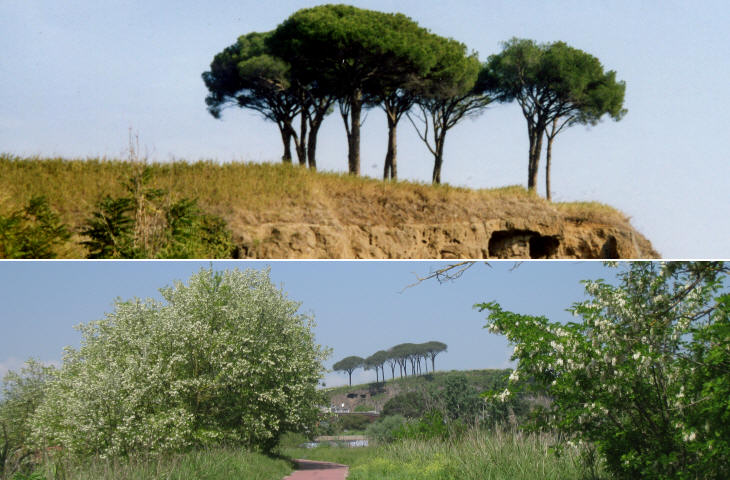 Views of the landscape along Via Flaminia

Via Flaminia heads north towards Civita Castellana, initially following the Tiber. From time to time the buildings of modern Rome give way to sites retaining a rural aspect. The first volcanic rocks, typical of northern Latium, appear on the left, while on the right one sees meadows at the sides of the river (you may wish to see other views of this area). 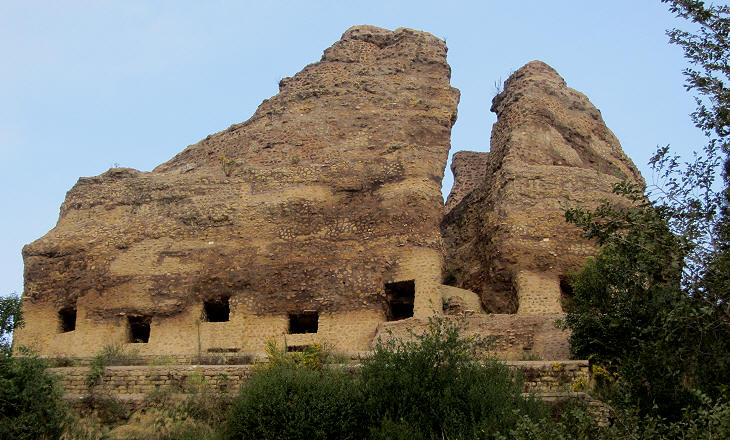 Via Flaminia, although to a much lesser extent than Via Appia, was flanked by funerary monuments. The ruins of a few of them can still be seen among the trees near the river or on the hills overlooking the road, often covered with that picturesque vegetation which made the ruins of Rome so appealing to the travellers of the past. 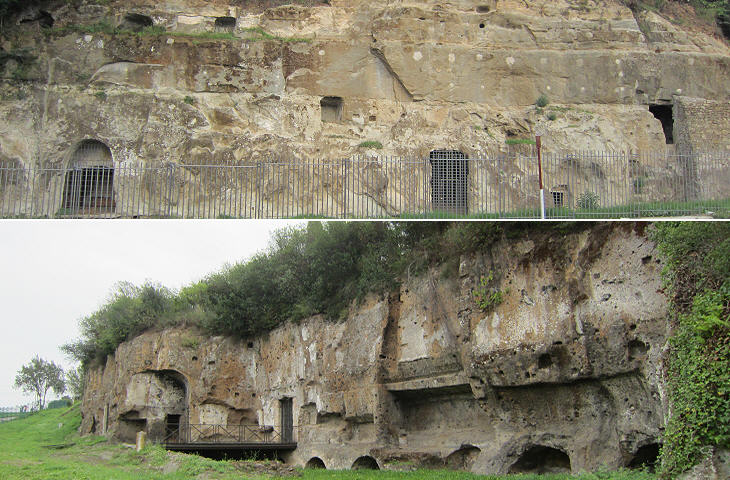 The White House is the residence of the President of the United States of America; the White Hens (ad Gallinas Albas) was one of the suburban residences of Emperor Augustus, or to be more precise of Livia, his beloved third wife. The reference to white hens is due to a legend telling that Livia dreamt that an eagle had dropped in her arms a white hen holding a laurel branch in its beak: the dream was interpreted as a favourable indication of glory and wealth and white hens were bred at the villa.
1863 excavations led to the discovery of a statue of the emperor, which in addition to its high artistic value, is very interesting as it tells us exactly how Augustus wanted to be portrayed for both political and religious reasons. 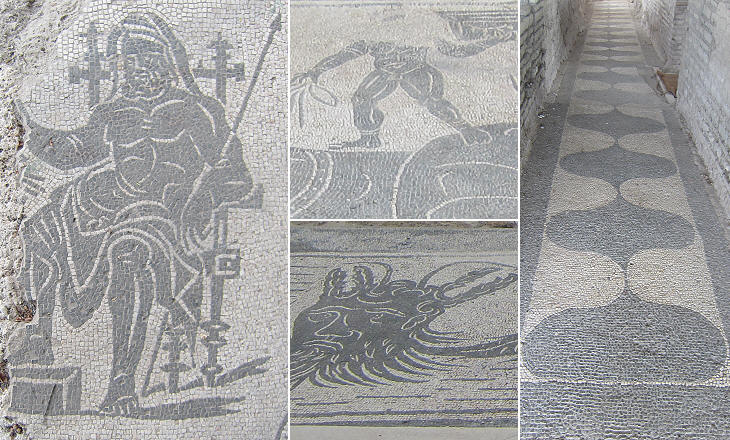 Details of black and white mosaics 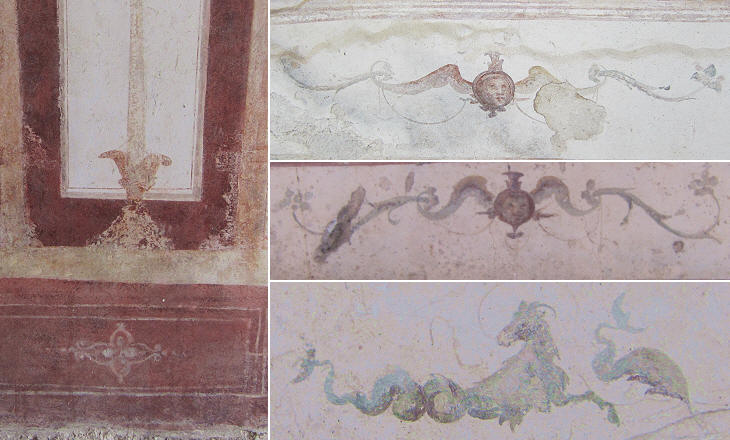 Most of the frescoes at Villa di Livia had a merely decorative purpose; they did not cover the entire wall and they had large empty spaces between each subject. You may wish to see those of the Houses of Augustus and Livia on the Palatine Hill. 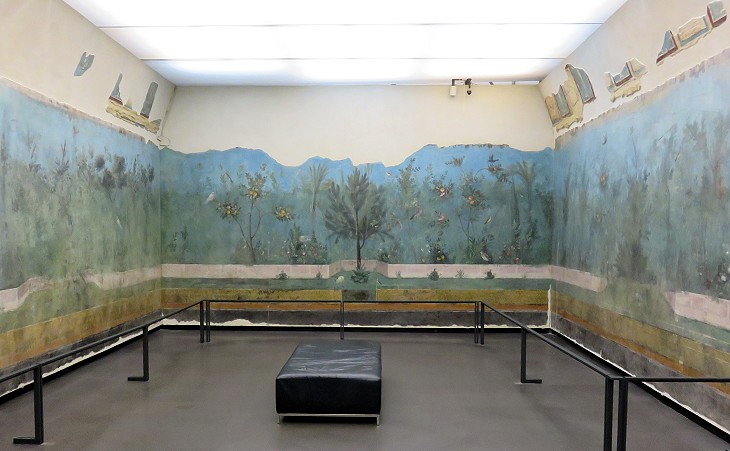 The villa was made up of terraces overlooking the river and supported by walls. It had several underground rooms providing a refreshing haven during the hottest days. One of them was found in excellent condition with a fresco decoration depicting plants and birds. You may wish to see similar frescoes at Villa di Poppea at Oplontis and at the House of the Orchard at Pompeii. 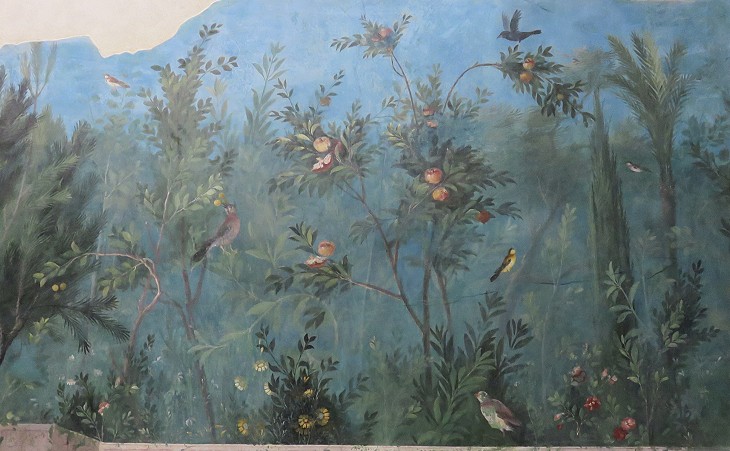 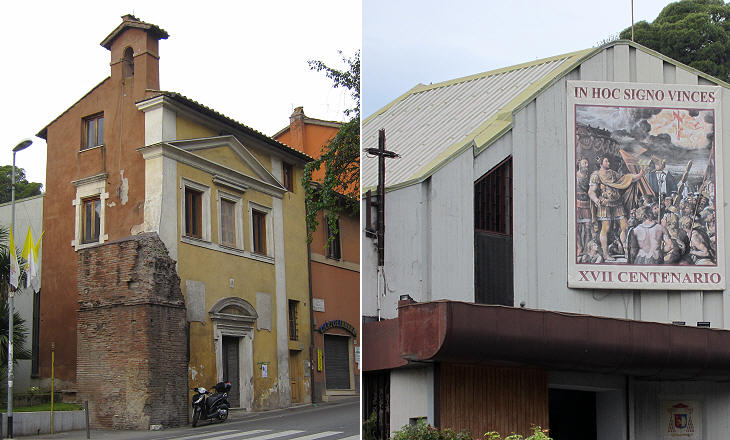 (left) SS. Urbano e Lorenzo; (right) a detail of the modern church by the same name with a poster celebrating the 1700th anniversary of Constantine's Vision before the Battle of Ponte Milvio which is shown in the image used as background for this page

The statue is called Augustus of Prima Porta (First Gate), after the name acquired by the section of Via Flaminia near Villa di Livia in the following centuries. The aqueduct bringing water to the villa formed a sort of gate over Via Flaminia which travellers saw as the first indication of having reached Rome. Only one pillar of the aqueduct is left next to a small church rebuilt by Pope Urban VIII in the XVIIth century. 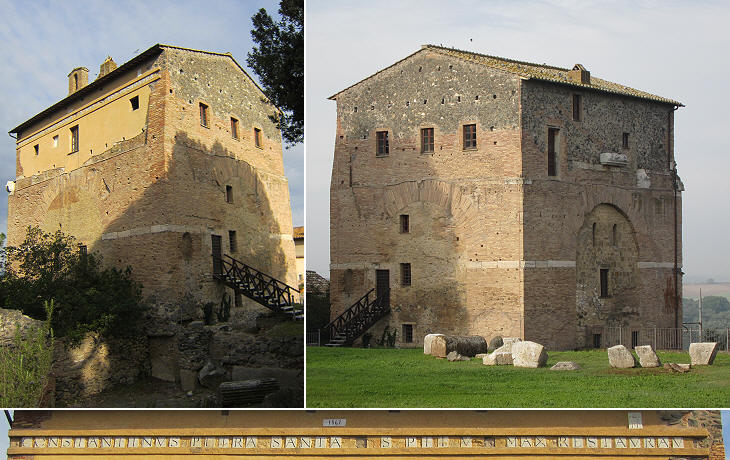 Malborghetto means evil small hamlet: it does not sound very reassuring: the name given to this building is most likely due to the fact that travellers, who stopped here on the last leg of their journey to Rome, were often robbed. The lower part of the building shows the neat design of Roman masonry, while the upper one is a medieval addition made up of small stones. The building which was used as a small castle, a farmhouse and a coach station was originally built as a triumphal arch dedicated to Emperor Constantine. 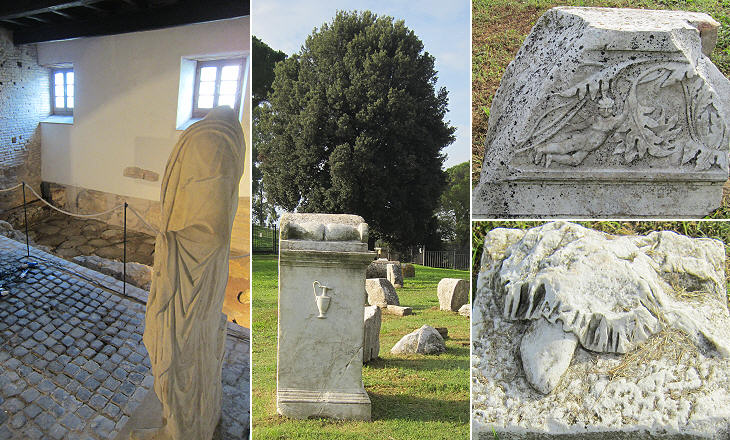 (left) Interior of the lower storey showing a section of Via Flaminia beneath the medieval floor; (centre/right) fragments of tombs, lintels and statues in the garden surrounding Malborghetto

The structure of the arch was similar to Arco di Giano in Rome with four openings. The two monuments were built at approximately the same time. Malborghetto and the surrounding garden house findings of excavations carried out along Via Flaminia. 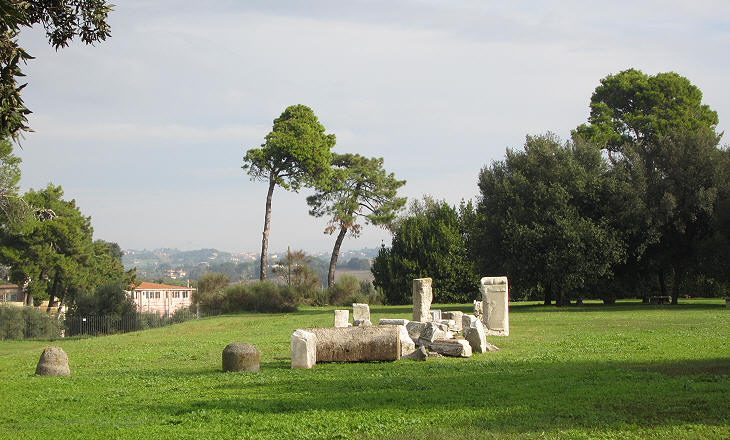 You may wish to move ahead along Via Flaminia