in the Roman Countryside
(detail of a fresco at S. Onofrio)

Ferdinand Gregorovius was born in 1821 in Neidenburg, a town in Eastern Prussia. He studied theology and philosophy in Konigsberg and became a teacher and a writer for the local paper. In 1852 he made his first trip to Italy and he started researching the history of Rome after the fall of the Roman Empire. His studies were finalized in 1872 by publishing the History of the City of Rome in the Middle Ages (8 vol.), which is still today regarded as a fundamental text by modern historians.
His fame however came from the accounts he made of various sites of Italy in Wanderjahre in Italien (Italian Walks).
With Teutonic thoroughness, the genial East Prussian was wont to take up his abode, for months at a time, in some ancient hill town of the Sabina, or Latium, or in the southern Campania (this Campania is not to be confounded with the Roman Campagna), where the spirit and customs of the past still lingered, and the peasant population retained their ancestral characteristics. The huge relics of palaces - once the abode of the prelates and princes whose lives he was revivifying - stood near to give reality to the narrative he was compiling from the archives of Rome. In his chapter on the Roman Campagna, Gregorovius says: "Just when I had reached the central point of my History I found myself located at Genazzano, the ancient home of that great house of Colonna, which then played a conspicuous role both in Latium and in Rome." This may exemplify his method of study.
From the preface to the English translation of some walks by Dorothea Roberts in 1899 which you can read in Bill Thayer's Web Site (it opens in another window).
Many accounts cover walks or rides he made in the environs of Rome.
Gregorovius was especially fond of Campagna di Roma, the countryside around and south of Rome: because of his interest for medieval Rome he was attracted by the little towns which had seen the fights between the popes and the emperors/barons/Angevins in the XIIIth and XIVth centuries. Most of his accounts were written between 1853 and 1860, in the last years of the Papal State. 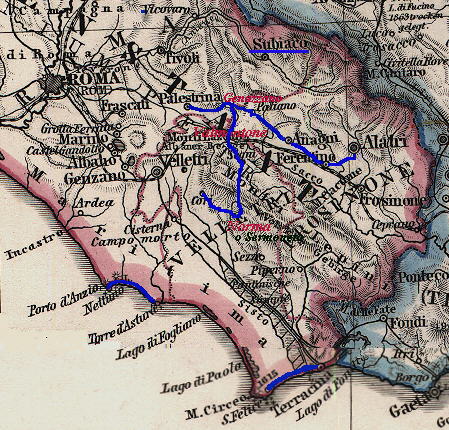 The map above was printed in 1863 and it shows the southern border of the Papal state. The blue lines show the itineraries of Gregorovius' walks you can find in this website. The pages give a short summary of Gregorovius' account together with pictures showing the main monuments.
Mr. Augustus Hare has utilised portions of the Lateinische Sommer. Some of us may even think those small-print quotations from our Gregorovius the most interesting of many given to the public by Mr. Hare in his interesting "Days near Rome." They sent me to the German book itself, yet my conscience would not allow me to transcribe Mr. Hare's version of the original, however much the style of so experienced a literary man may excel that of a mere novice. Roberts.
Quotations from Gregorovius are usually based on Dorothea Roberts' translation, but in some instances they are taken from 1875 Hare's Days near Rome.