Palazzo Spada was built in the middle of the XVIth century and it was lavishly decorated by Giulio Mazzoni, a young scholar of Michelangelo. It provides interesting evidence of the cultural changes which where occurring during the papacy of Pope Julius III (1550-1555).
The peak of the Renaissance in Rome is usually associated with popes Alexander VI (1492-1503), Julius II (1503-13) and Leo X (1513-21), who acted and behaved as secular princes rather than spiritual leaders. They paid formal respect to religious practices and ceremonies, but similar to the rulers of the small and rich states into which Italy was split, they were attracted by the rediscovered culture of ancient Greece and Rome.
The Reformation and the dramatic events which followed forced changes which reasserted the religious role of the pope. The process was not smooth and with the election of Julius III in 1550, Rome had again a pope mainly interested in banquets and feasts. 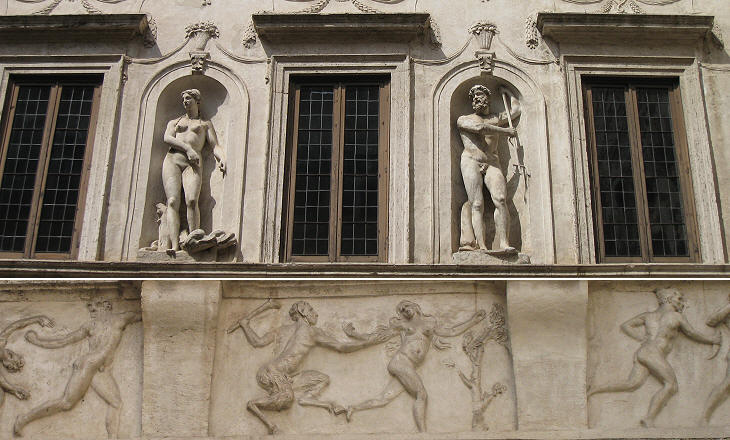 Pagan decoration of the courtyard of Palazzo Spada by Giulio Mazzoni

Cardinal Girolamo Capodiferro, the first owner of Palazzo Spada, commissioned Giulio Mazzoni to sculpt a decoration which symbolizes the cultural complexity of this period of transition and which could be summarized by the sentence "Public virtues and private vices".
The decoration of the courtyard is definitely a tribute to the ancient world: the stark naked statues of the Greek gods and the reliefs with several rather lascivious scenes are clear evidence of the prevailing culture during the Renaissance. 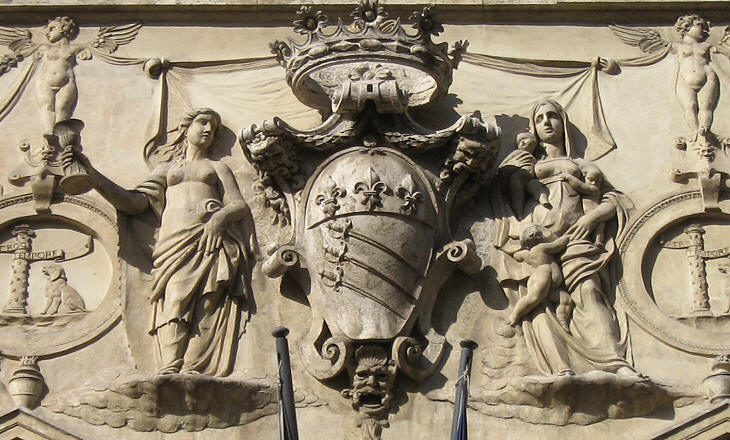 Cardinal Capodiferro did not consider it appropriate to decorate the façade in the same way and although the statues of Roman consuls and emperors are a reminder of the ancient world, the main element of the façade was the coat of arms of Pope Paul III (later on replaced by the coat of arms of Cardinal Spada) flanked by the statues of two theological virtues, Faith and Charity.

In the second half of the XVIth century the representation of Virtues gradually became more and more common while at the same time the portrayal of the pagan gods was regarded with suspicion and almost banned. The representation of Virtues was not uncommon in Renaissance paintings and sculptures and it followed a traditional iconography which let the viewer understand which virtue was portrayed. In 1603 a book by Cesare Ripa, a librarian employed by Cardinal Antonio Maria Salviati, set clear rules for the portrayal of Virtues and a host of other personifications, such as Time, Love, the Seasons and the Months, the main rivers, the winds, etc. Ripa based his recommendations on extensive research of ancient sculptures, coins and medals. The book had small drawings attributed to il Cavalier d'Arpino, perhaps the most famous painter in Rome at the beginning of the XVIIth century.
The book had a great success and it had several editions as it provided painters and sculptors (as well as those who commissioned their works) with a well structured repertory of images and most important an explanation of their iconography. Prudence, for instance is portrayed holding a snake, but the text clarifies she is holding a fish, remora, known for attaching itself to ships and thus supposed to retard their motion. This makes sense because prudence requires careful thought and not hasty decision. The text also explains why Prudence is seeing herself in a mirror: it is a reference to the Latin maxim Nosce te ipsum (know yourself) derived from an inscription in the main temple of Delphi. The knowledge of personal strengths and weaknesses is a requisite of a prudent action. The XVth century statue by Isaia da Pisa shows these two attributes of Prudence as if the Virtue were showing her identity card at a passport control. Domenico Guidi in the late XVIIth century figured a much more intriguing representation of Prudence, although the fine young woman, whose attractive body is evident behind the elaborate dress, reminds a modern viewer of Vanity, rather than of Prudence (Venus was often portrayed with a mirror).

Animals were often associated to a personification to make it understandable. A lamb was an easy to understand connotation of Humility and a dog of Faithfulness, but we need to read Ripa's book to figure out why a unicorn is associated with Virginity: according to Ripa this fabulous animal was so shy that only a virgin could approach it. All in all the association works also in today's world, in the sense that both unicorns and virgins are very difficult to find. 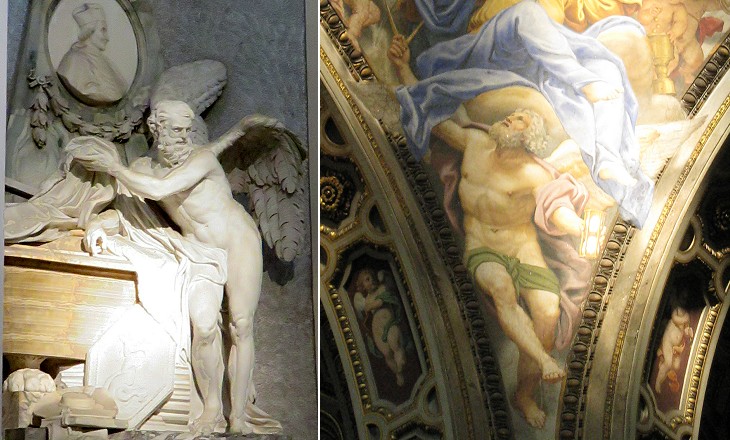 Most of the personifications were female characters. The personification of Time was a notable exception and provided a male alternative to the many Charity, Faith, Religion etc., who were portrayed in funerary monuments. Time was portrayed with wings, but they were not the wings of an angel, just a reference to the Latin maxim Volat irreparabile tempus (Time irreparably flies). The hourglass was an evident sign of time, while the compass had a more complex meaning as it hinted to the circle which has neither beginning nor end and thus was a reference to the eternity of Time.

Very often the rules set for the portrayal of Virtues led to a repetitive design which makes the viewer believe he has already seen a given sculpture or painting. Gian Lorenzo Bernini was able to create new ways to portray the Virtues while complying with the recommended iconography, or rather to use it to represent more common emotions. The Monument to Cardinal Pimentel in S. Maria sopra Minerva shows the cardinal (still a young man) in the act of praying and below him four Virtues: Charity, Strength, Religion and Justice: traditionally Justice was represented in the act of holding a balance, but Bernini who designed the monument but entrusted his associates with its execution, preferred to identify Justice through other attributes: the fact of being blindfolded (because Justice must not be influenced by the senses, but only rely on reason) and the fasces, the bundle of rods with projecting axe-blade, which in ancient Rome were carried before the magistrates. A putto deals with the fasces and Justice rather than being blindfolded just covers her eyes and we are left with an image of Justice, which appears to represent the very human portrait of a young widow and of her inconsolable grief. A few years later Filippo Carcani similarly gave to Religion a much more familiar aspect by having a putto holding the Bible and by reducing to a very small size the Cross, another attribute of Religion, which often was a gigantic one (e.g. in a monument by Antonio Canova). 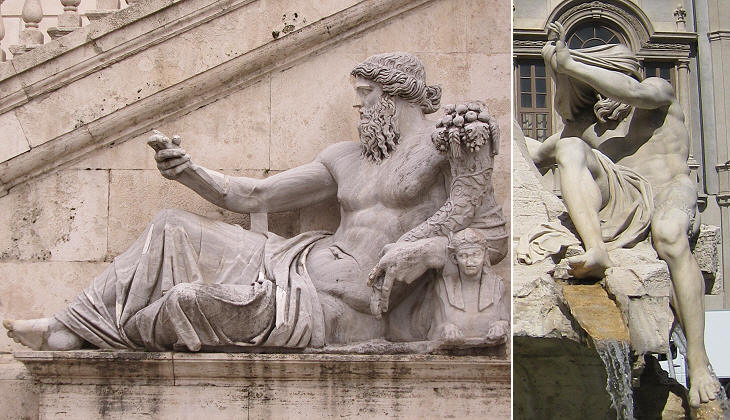 If an ancient Roman were to walk in Piazza Navona, he would surely identify the Danube in the statue of the river covering his head. This is because the Romans, as shown in a medal of Trajan quoted by Ripa, portrayed the Danube in such a way with a reference to its origin in the then impenetrable Black Forest in southern Germany. The Romans portrayed the Nile in a very triumphal way, lying on a sphinx and holding a cornucopia, a symbol of the valuable yields of Egypt. Bernini, who wanted to represent both rivers, preferred to switch the ancient iconography because the Danube, which in the XVIIth century was known as the river of Vienna, the seat of the Holy Roman Emperor, could no longer be shown in a mysterious and threatening way, so the Nile, the origin of which were unknown, was portrayed with a covered head.

The image used as a background for this page shows a detail of Humility by Bartolomeo Pincellotti.