Isbarta is magnificently situated at the foot of an enormous range of mountains (of which the summits of many were capped with snow, while others still more elevated rose behind, forming entire masses of snow) with so fine a plain before it, that it must surely have been the site of an ancient city of no small importance.
Francis Vyvyan Jago Arundell - A Visit to the Seven Churches of Asia - 1826
As we approached within a few miles of Isbarta, half concealed amidst orchards and gardens and situated at the foot of a steep and lofty chain of mountains which rises immediately to the south, partly covered with vineyards and fruit trees, the view was very picturesque; although decidedly inferior in point of situation, it reminded me of Brusa.
William Hamilton - Researches in Asia Minor, Pontus and Armenia - 1842 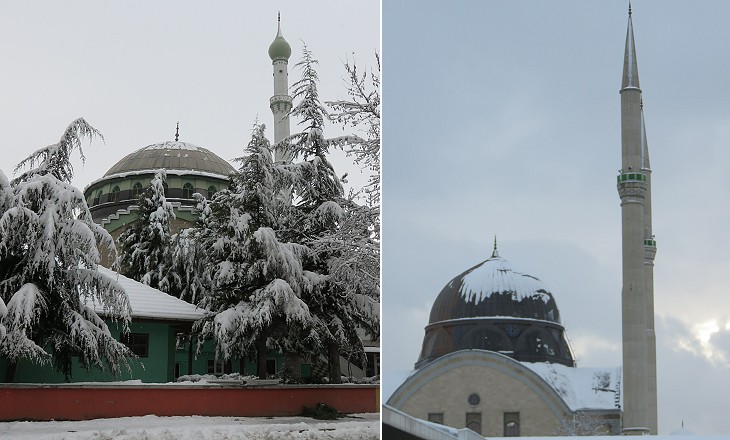 The valley of Sparta is beautiful compared with the country through which I have lately passed; the season here is a degree forwarder, and the almond-trees are just coming into bloom; at Smyrna and on the western coast two months since they were nearly out of blossom.
Charles Fellows - Journal Written during an Excursion in Asia Minor in 1838
Isparta is situated at the southern end of the Anatolian tableland at an altitude of 1,035m/3,400ft. The western section of the Taurus Mountains separates it from the coastal plain surrounding Antalya. Many XIXth century travellers visited Isparta on their way to Sagalassos. 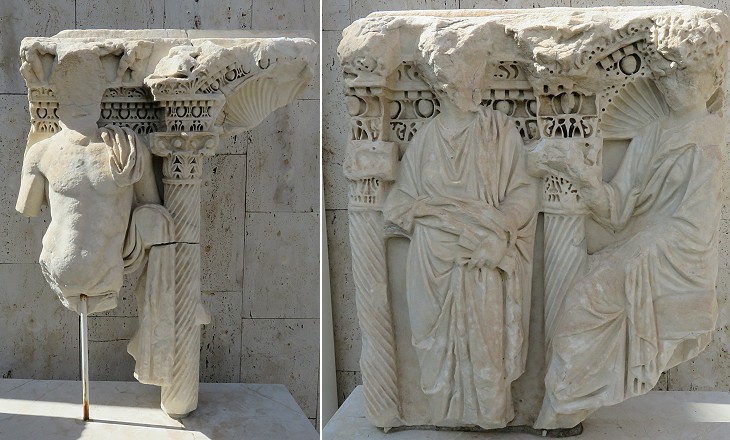 Archaeological Museum: fragments from Sidamara sarcophagi found at Sarkikaraagac in the district of Isparta

Anxiety for evidences in support of my conjecture as to the identity of Isbarta with Antioch of Pisidia induced me to walk about the town in pursuit of medals, or inscriptions. (..) In the afternoon we took a ride from the east end of the town, along the foot of the range of mountains, in the hope of making a discovery of some of the ruins, with which I had been assured the neighbourhood of Isbarta abounds. We saw not the smallest vestige, and the ride being extremely unpleasant, from a high wind which blinded us with dust, we thought it prudent to return to the town. F. V. J. Arundell
The ruins of Antioch of Pisidia were eventually identified at Yalvac, north-east of Lake Egirdir. The ancient name of Isparta was Baris, but the town retains very little evidence of its past.

Archaeological Museum: (left) gravestone of a Roman legionary; (centre) altar having on a side the symbol of Sicily (three bent running legs); (right) relief portraying a young man holding a cock, a sacrifice to Asclepius, god of Medicine

In 25 BC Emperor Augustus made Antioch in Pisidia a Roman colony and named it Colonia Caesarea Antiochia. Some of the exhibits at the Archaeological Museum show the presence of Roman veterans in the region.
Crito, we ought to offer a cock to Asclepius. See to it, and dont forget. Crito answered that it would be done, and asked if there was anything else. No reply. A moment later, Socrates was gone.
Colin Wells - The Mystery of Socrates' Last Words - 2008
Socrates' words have generally been interpreted as meaning that the philosopher wanted to thank Asclepius for being delivered from the painful disease of life, but the debate among academics is still going on.
A cock was offered to Asclepius, because the animal announces the beginning of a new day after the night, an event similar to recovering from illness. 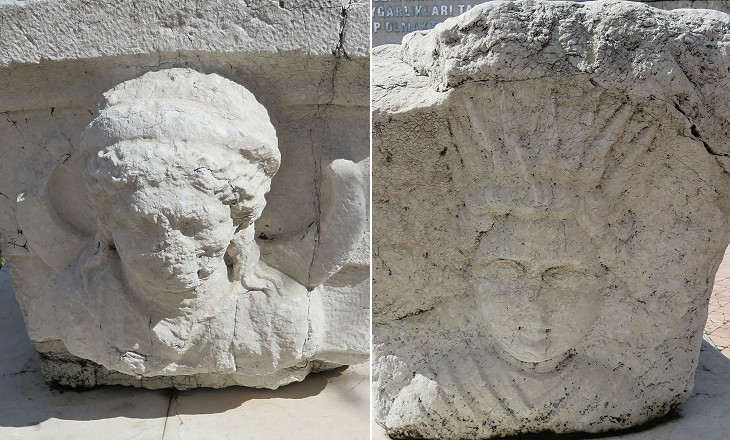 Archaeological Museum: fragments of reliefs found in the district of Isparta

Other reliefs point to the influence of eastern religions in the Roman Empire which became particularly strong during the IIIrd century AD. The two reliefs shown above recall Aglibol (Moon) and Malakbel (Sun), two deities which you can see in a beautiful relief at the sides of Bel, the main god of Palmyra in Syria. 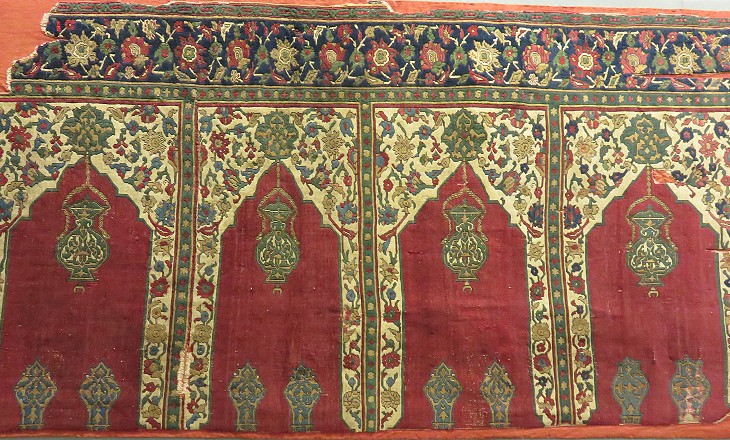 Turkish and Islamic Arts Museum in Istanbul (housed in Ibrahim Pacha Sarayi): section of an early XVIIth century multiple niche prayer carpet from Usak, a town west of Isparta. It helped believers to distribute themselves inside the mosque in an orderly manner

A ride of an hour and a quarter down a rich and well cultivated valley brought us to Ushak celebrated for its carpets. (..) The khan at which we halted was filled with bales of carpets ready packed for the Smyrna market. The manufacture of these together with the necessary dyeing of the wool forms the chief occupation of the inhabitants of Ushak. The dyes of Asia Minor are celebrated for their vividness and durability, particularly the red of madder and the green from berries which grow in great abundance near Caesarea and Angora and are called by the merchants of Smyrna yellow berries. W. Hamilton
The industry of carpet making is an old one, the districts of Geurdiz, Kula, Ushak, and Isparta having long been renowned for the fine rugs called Asia Minor carpets.
Anatolia - Handbook Prepared under the Direction of the Historical Section of the Foreign Office - 1920 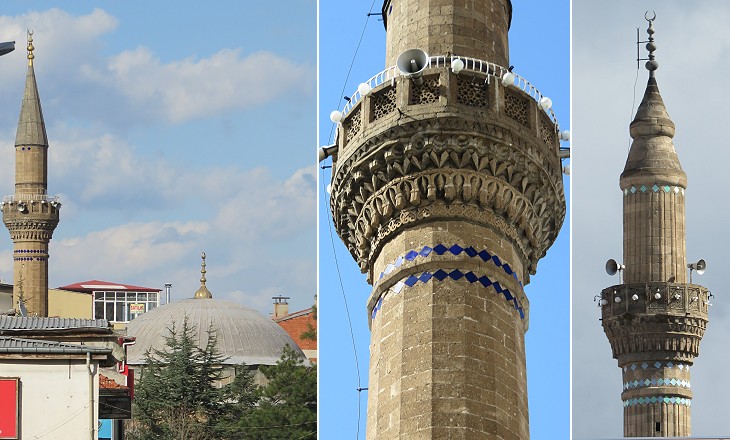 A Turkish town owes its principal beauty to the elegant minaret rising over the terraced roofs amidst groves of cypress; and though nothing can equal, in my estimation, the massy towers of our cathedrals and old parish churches, yet for a modern chapel, substitute the cross for the crescent, and the minaret might perhaps be a graceful ornament. F. V. J. Arundell (he was the chaplain of the British community at Smyrna)
Firdevs Bey Camii was built by the governor of Isparta when the great architect Mimar Sinan was in charge of endorsing the design of all public buildings in the Ottoman Empire. 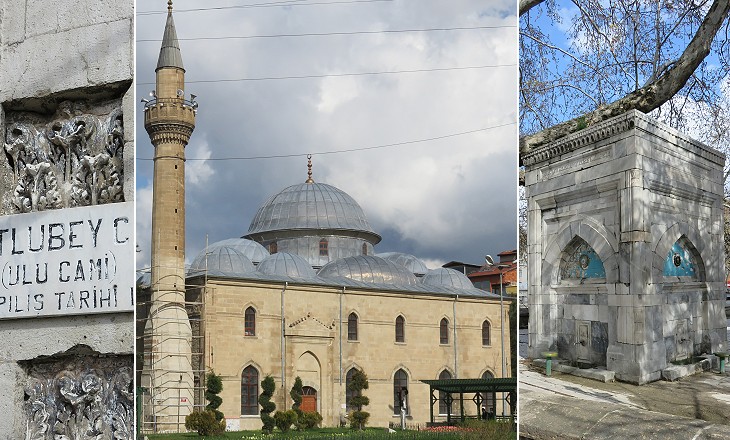 Ulu Camii (Great Mosque): (left) ancient capitals walled at the base of the minaret; (centre) the mosque; (right) its fountain

The Great Mosque of Isparta was built in 1429, soon after the town had been conquered by the Ottomans, but it was entirely rebuilt in 1899 and again in the 1920s, after it had collapsed because of an earthquake. The design of its central dome departs from the usual pattern of Ottoman architecture and it has a slightly Greek Orthodox church appearance. 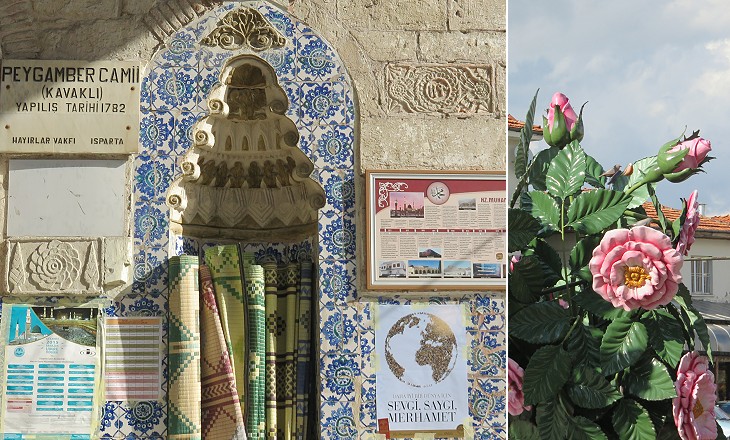 (left) Detail of the portico of Peygamber Camii (1782 aka Tiled Mosque); (right) metal monument to the rose. The cultivation of roses in the Isparta province was introduced from Bulgaria in the late XIXth century and the production of rose oil has become a key element of the economy of the town. Rose oil is a raw material in the perfume and cosmetics industry

The image used as background for this page shows a Kutahya tile of Peygamber Camii.