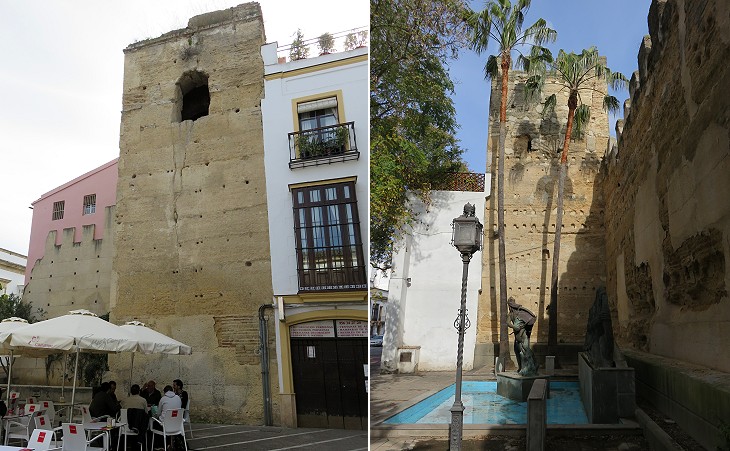 Arab walls of the town: (left) Torreon de la Puerta Nueva; (right) tower near the monument to Nunez Cabeza de Vaca, an explorer of the New World who was born at Jerez

On the 27th of July, I hired a single-horse chaise, and in three hours arrived at Xerez. The road is sandy, and continues gradually rising, so that from the eminence on which Xerez is situated, I beheld a fine prospect over olive-grounds, intermixed with cottages white-washed, with a distant view of the bay of Cadiz. (..) I entered the town through a double Moorish gate, over which is an Arabic inscription.
Richard Twiss - Travels through Portugal and Spain, in 1772-1773
Xerez de la Frontera, or Jerez is called of the frontier to distinguish it from Jerez de los Caballeros, in Estremadura. It was termed by the Moors Sherish Philistin, because allotted to a tribe of Philistines.
Richard Ford - A Handbook for Travellers in Spain - 1855
The reference added to the name is Frontera de Granada, the border region of the Kingdom of Castile with that of Granada. The border was relatively stable between the 1350s and the 1480s. 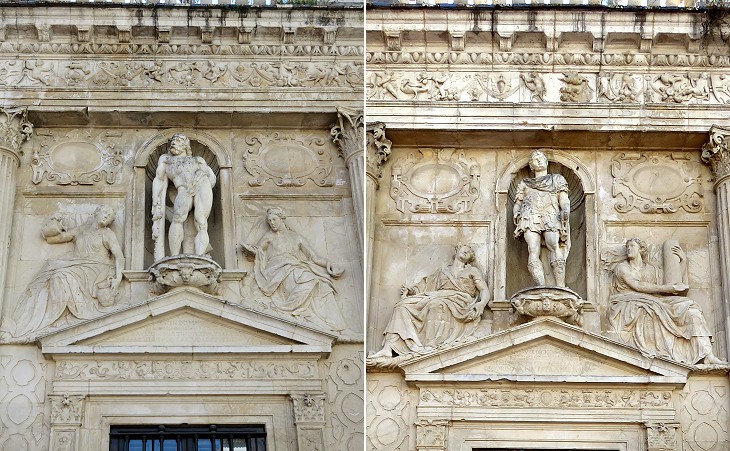 Cabildo (Town Council) Viejo: statues of Hercules (left) and Julius Caesar (right); they both are portrayed also at Alameda the Hercules in Seville

The town is large, well peopled, pleasant, and cheerful. The streets are wide, clean, well kept, and paved with care; we may even say with studied elegance. It is surrounded with walls; has a large square, and a handsome Hotel de Ville.
Alexandre de Laborde - A View of Spain - translated into English for Longman, Hurst, etc. 1809
Supposed by many to have been the ancient Astaregia Caesariana. Observe the facade of the Casas de Cabildo, erected in 1575. Ford 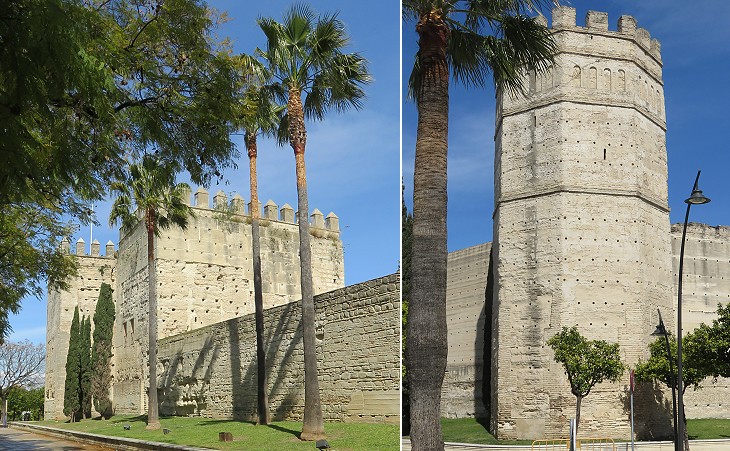 Jerez was taken from the Moors, in 1264, by Alonso el Sabio, the Learned. Part of the original walls and gates remain in the old town. Ford
In 1248 the Kings of Castile conquered Seville and established a sort of protectorate over the region to its south. In 1264 the Muslim inhabitants of Jerez and other nearby locations rebelled because of the heavy taxation imposed on them. The repression of the revolt was very harsh and Jerez was annexed to Castile, its Muslim inhabitants were expelled, the mosques were turned into churches and the region was settled by Christians from elsewhere. 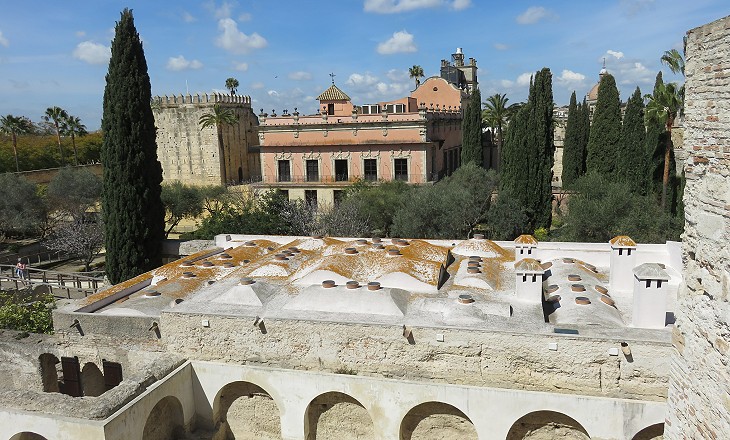 The Moorish alcazar, which is near the public walk, is well preserved, and offers a good specimen of these turreted and walled palatial fortresses. It belongs to (Lorenzo Fernandez de Villavicencio) Duque de San Lorenzo, on the condition that he cedes it to the king whenever he is at Jerez. Ford Mosque of the Alcazar

The mosque was turned into a church in 1264. The building has been restored in order to enhance its original Moorish aspect, but actually only the horseshoe arches suggest its original use, because all the decoration is lost. 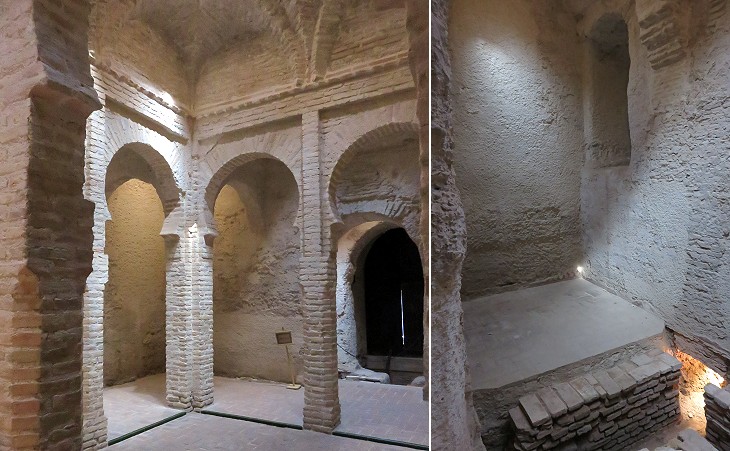 Arab baths of the Alcazar

The same applies to the baths, although here the original division in halls and the original heating system are still noticeable. Restorers had as model the baths of Ronda, the best preserved Arab baths of Spain. 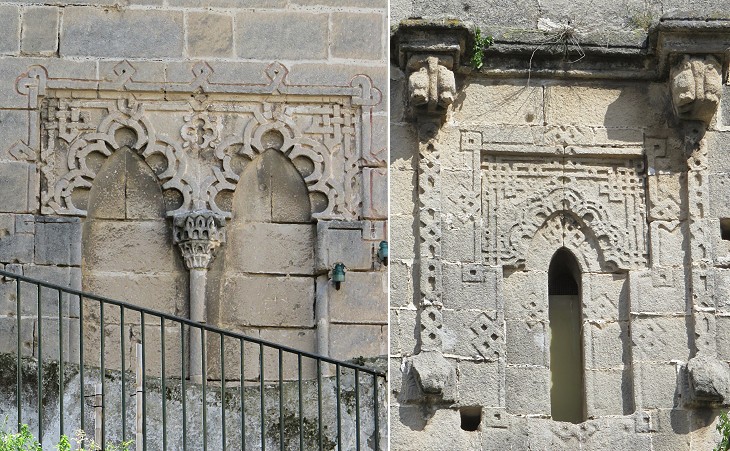 San Dionisio: mudéjar details of the exterior (another window can be seen in the image used as background for this page)

The conquest of Jerez occurred on the Feast of Saint Dionysius the Areopagite (October 3), who became the patron saint of the town. A church dedicated to him was built in the following years. During the first half of the XVth century it was redesigned with some mudéjar (Moorish style which characterizes many Christian monuments) features, similar to those of churches of Seville. 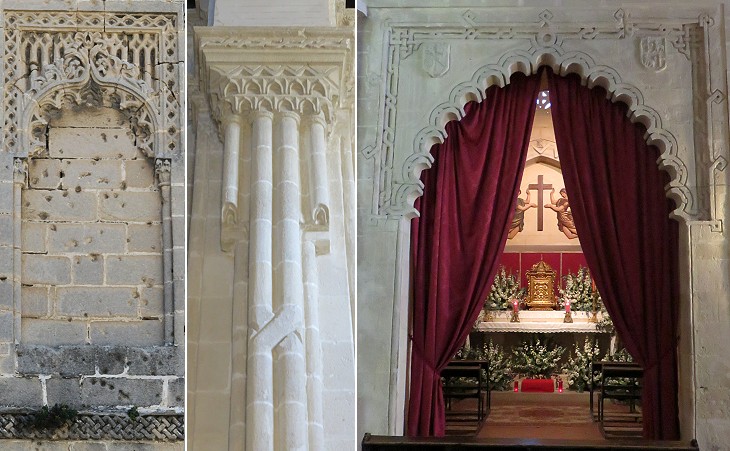 In 1728-1730 and in 1758-1760 (after the 1755 catastrophic earthquake of Lisbon, which had effects on Spain and Morocco too) the interior of the church was modified in order to give it a Baroque aspect. In the 1960s and 1970s some of these additions were removed to show the remaining elements of the XVth century church. 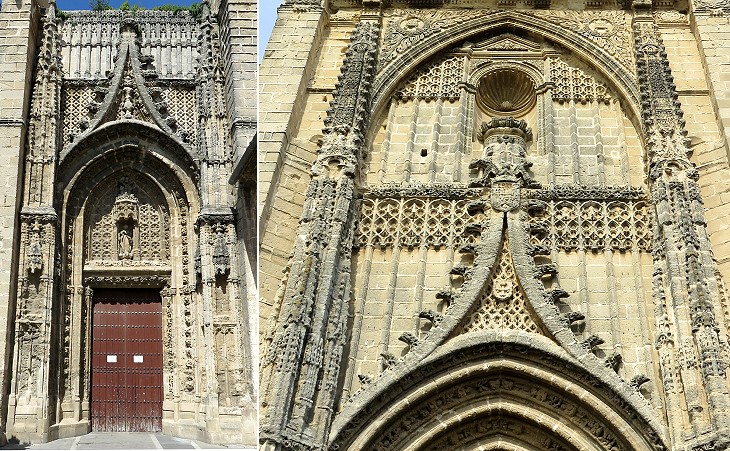 Notice the façade of the churches of Santiago and San Miguel, especially the Gothic details of the latter. Ford
Both portals have distinctive Gothic features, however their decoration is mainly based on geometric patterns which are typical of Moorish architecture. 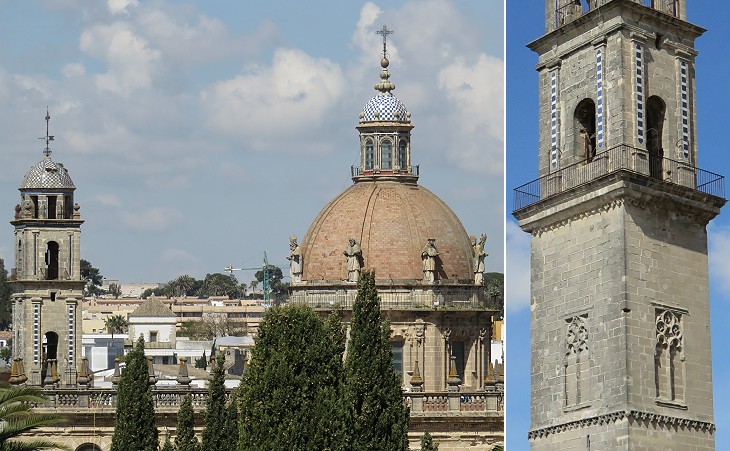 The Colegiata, begun in 1695, is vile churrigueresque (a style named after José Benito de Churriguera, a Spanish architect and characterized by an elaborate decoration); the architect did not by accident stumble on one sound rule, or deviate into the commonest sense. Ford
The bell tower is that of a former XVth century church and its lower part reflects the impact of square Moorish minarets, chiefly the Giralda of Seville, on later Christian bell towers.

You especially, Silvinus, can bear me out in this, since you will readily recall that I completed the planting of two iugera of vineyard within two years time by making grafts from one early-ripe vine belonging to you on your place at Caere.
Lucius Junius Moderatus Columella - De Re Rustica - Book III - Loeb Classical Library 1941.
There is not much evidence of Jerez having been a Roman town; it was a florid agricultural area named after Ceres, the Roman goddess of agriculture, from whom the name of the Arab town derived. The passage from Columella shows that its vocation for vine growing is very old.
Xerez is a pretty large town, and is the mart for the wine known in England by the name of sherry: twenty thousand butts of this wine are annually exported; the price upon an average is fifty dollars per butt. I waited on Mr. John Brickdale, who is the only English wine-merchant in this town. Twiss
The country about Xerez is very fertile and well cultivated. Besides all the kinds of fruit trees which every where abound, it grows vegetables, corn, and particularly a grape which produces an excellent wine, known all over Europe, called in England Sherry. There are English and French houses here, that trade principally in this wine: the quantity exported yearly is estimated at fifty thousand quintals. Laborde
The wines of Jerez are in better taste than the temples, and now-a-days more go to the cellar than to the church. (..) The sherry wine was first known in England about the time of our Henry VII. It became popular under Elizabeth, when those who under Essex sacked Cadiz brought home the fashion of good "sherris sack." It is still called "seco" here, which is the old English seek, the French "sec", a word used in contradistinction to the sweet "malvoisies". (..) It is, in fact, a foreign wine, and made and drunk by foreigners; nor do Spaniards like its strength, and still less its high price. (..) Every traveller will of course pay a visit to a great Bodega. Ford