Lanuvium condidit Diomedes ex Ilio advectus, ut scribit Appianus in secundo Bellorum Civilium.
Martino Filetico, a XVth century humanist from Ferentino, reported that Lanuvio was founded by Diomedes, king of Argos after he returned from the War of Troy. Filetico found this information in a book written by Appian of Alexandria, a IInd century AD historian; most likely Appian attributed a Greek and noble origin to Lanuvio in order to please Antoninus Pius, the reigning emperor, who was born here and had a villa near this small town. 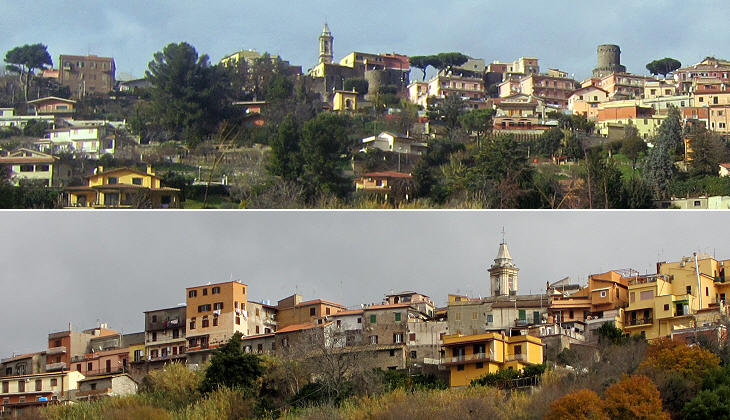 Views of Lanuvio from south-east (above) and north-west (below)

Lanuvio was called Civita Lavinia until 1914 because according to a medieval tale it was the ancient Lavinium, the town founded by Aeneas, a Trojan prince, in honour of Lavinia, his young wife and daughter of Latinus, king of the Latins, the ancient Italic tribe associated with the foundation of Rome.
At Vasi's time this account was already dismissed as false and the town was identified with ancient Lanuvium, whereas Lavinium was identified with Pratica (see a page on this location). Because of its location on a hill accessible only from one side Lanuvium enjoyed that security which in antiquity was of paramount importance in the development of settlements. 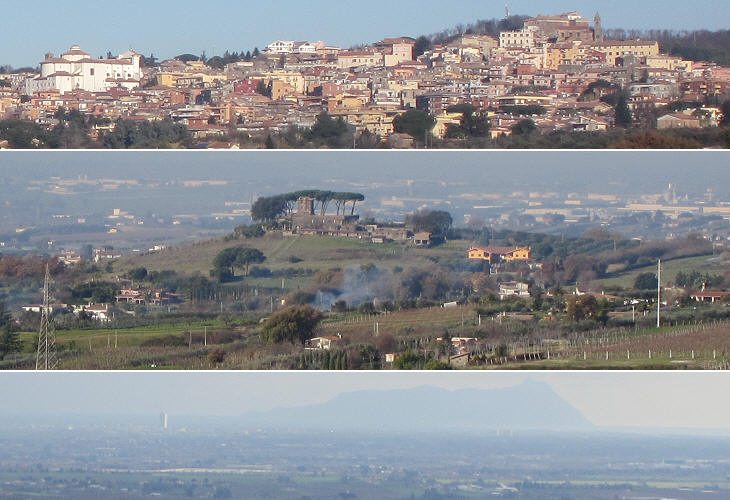 Views (in descending order): 1) towards Genzano (the large white church on the left is SS. Trinità while S. Maria della Cima and Palazzo Sforza Cesarini are at the top of the town); 2) towards Montegiove, a medieval tower on the site of ancient Corioli; 3) towards the former Pontine Marshes with Mt. Circeo in the background

Lanuvio has commanding views of other towns of the Alban Hills (including Velletri) and of those of the coastal plain. Similar to nearby Corioli, Lanuvium was inhabited by the Latins, whose main town was Alba Longa. After the Romans seized and destroyed Alba Longa, the remaining Latin towns joined in a league and sought the help of the Volscans who controlled a vast territory spreading from Velletri to Terracina. The Romans continued their expansionistic policy and in the Vth century BC Corioli was conquered and destroyed by Gaius Marcius, a Roman commander who for this achievement was named Coriolanus. Later events of his life inspired Shakespeare's tragedy by the same name.
Unlike Corioli, Lanuvium was not destroyed by the Romans and it became a prosperous, albeit small, town. 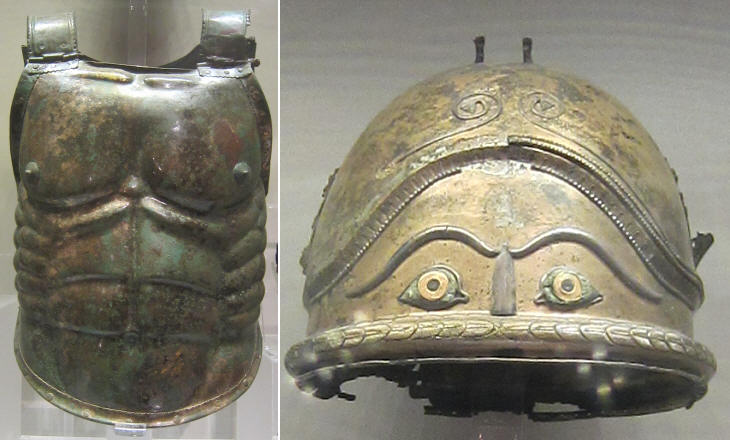 Museo Nazionale Romano: armour and helmet of a warrior (Vth century BC thus contemporary to the Roman conquest of Corioli) found near Lanuvio

In 1934 the discovery near Lanuvio of what appeared to be a roughly cut sarcophagus led to finding the elaborate equipment of an important man who was at the same time a warrior and an athlete, as he was buried with his armour and helmet and with his exercising equipment (a discus, a strigil for scraping sweat, a pouch containing sand to dry the hands). The anatomical rendering of the breastplate indicates a Greek influence as well as the elaborate parade helmet of bronze, silver, gold and glass paste (the eyes are outlined in silver, the irises picked out in gold). 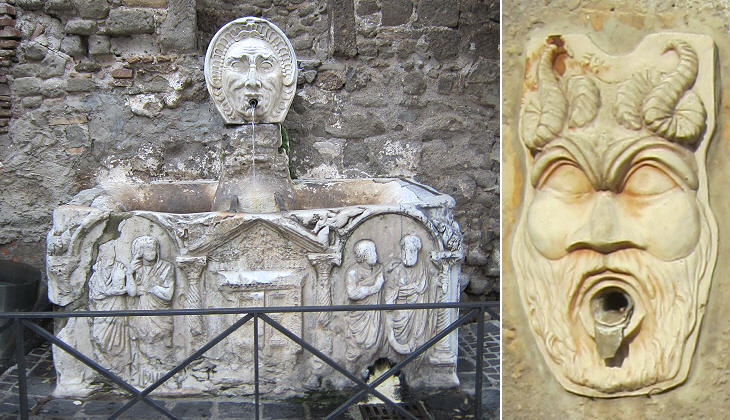 The economy of Lanuvium was based on a sanctuary dedicated to Juno Sospita (she who favours); the goddess was worshipped in Rome in one of the three temples which made up S. Niccolò in Carcere. The origin of the sanctuary was linked to ceremonies aimed at favouring good harvests. A sacred snake was housed in a cave and during a ceremony it was offered flat bread by a group of virgins. When the offer was refused the event was seen as a bad omen and one of the virgins was sacrificed to appease the gods.
The site of the shrine has been identified outside the medieval town; it consisted of a series of terraces on the slope of a hill leading to a cave preceded by a portico, so its overall appearance resembled the sanctuary of Fortuna Primigenia at Palestrina. According to Pliny the Elder in the Ist century AD it was in a state of abandonment, although an inscription indicates it was restored by Emperor Hadrian. After its final closure at the end of the IVth century the walls supporting the terraces collapsed and the sanctuary slid downwards, so that not much of it is left. The Romans built walls on the slopes of the hill to obtain large terraces; these walls were utilized during the Middle Ages to protect the town, which because of its proximity to the sea was subject to Saracen raids. 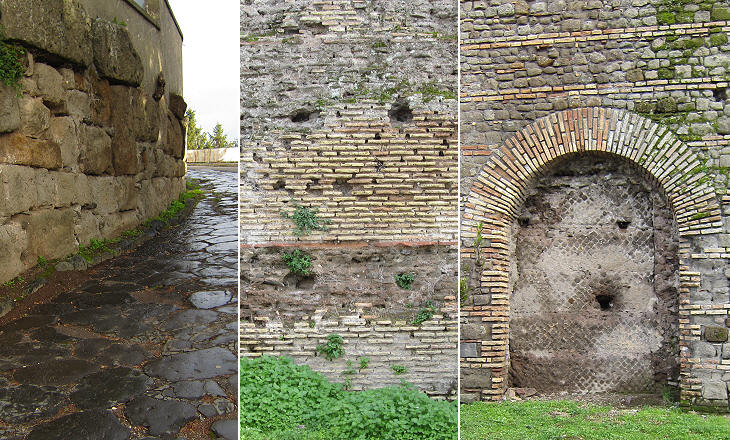 Roman construction techniques: (left) a wall made up of large peperino blocks and a section of a Roman road; (centre) "opus latericium"; (right) "opus reticulatum"

A walk around the medieval town and to nearby S. Maria delle Grazie allows the observation of parts of ancient Roman buildings (niches, platforms, arches) which were incorporated into the walls in addition to other walls which indicate that Lanuvium was larger than the medieval town. 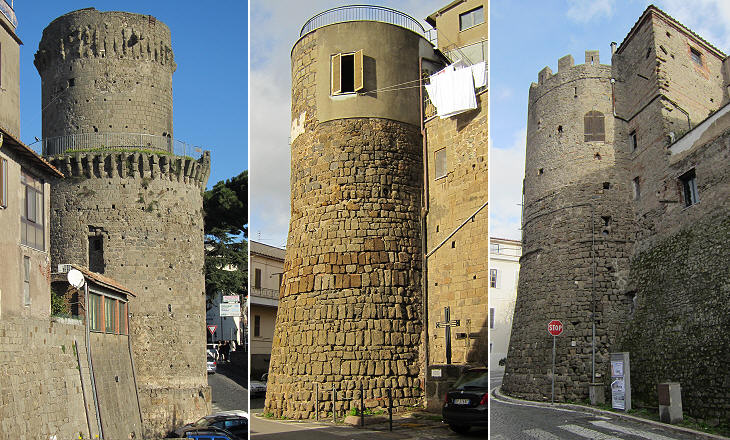 Towers of Lanuvio: that on the left (which protects the entrance to the town) was strengthened by Cardinal Guillaume D'Estouteville in the second half of the XVth century when he resided in Velletri

During the XVth century the history of Lanuvio became strictly linked with that of Genzano because the two towns were a possession of the Colonna, however also the titular cardinals of Velletri wanted to have influence over Lanuvio; the diocese of Velletri was united to that of Ostia and the cardinal-bishop of Ostia/Velletri was the Dean of the Sacred College of Cardinals, the second highest office in the Roman Catholic hierarchy. 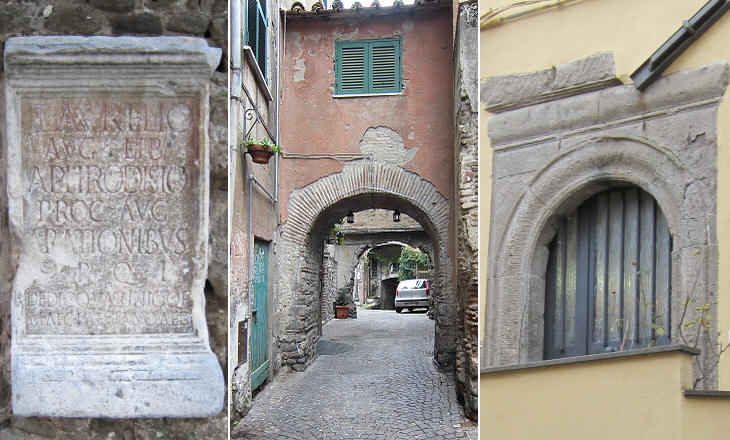 In the streets of Lanuvio

The area inside the walls is very tiny, yet it retains memories of the long history of the town, including a small ancient relief showing a triton which can be seen in the image used as background for this page. Similar to Genzano, Lanuvio was sold by the Colonna in 1563 and in the following year it was acquired by Giuliano Cesarini, a relative of the Colonna as he married Giulia Colonna, daughter of Prosperetto.
The Cesarini set their residence at Genzano and did not care much about a small Colonna palace at Lanuvio, but they rebuilt Collegiata di S. Maria Maggiore, the only church inside the walls; the façade was redesigned in 1675 and the bell tower was built in 1680 (and repaired in 1714 after it was damaged by lightning). 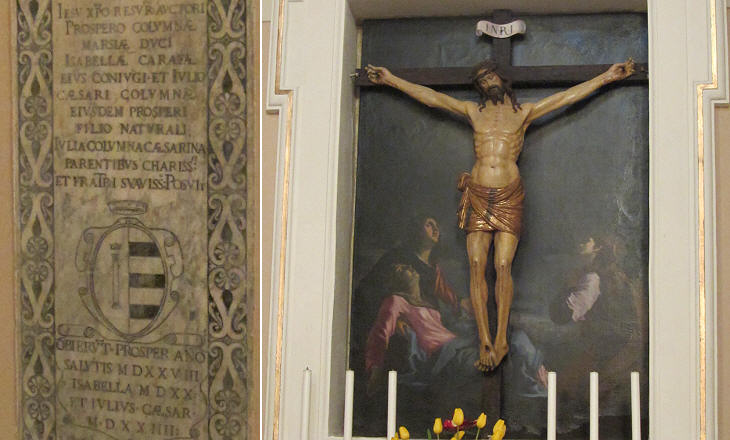 The Colonna, in addition to their many fiefdoms in the Papal State, had many possessions in the Kingdom of Naples. The Carafa were an important Neapolitan family and they became known in Rome when Oliviero Carafa was appointed cardinal in 1467. A sort of family alliance was signed (prior to 1520) when Prosperetto Colonna married Isabella Carafa. In 1556 the rivalry between the two families was the cause of Guerra di Campagna, a war between Pope Paul IV (a Carafa) and King Philip of Spain who supported the Colonna. Giulia Colonna, daughter of Prosperetto and Isabella, greatly suffered because of the conflict between the families of her deceased parents and she wanted to celebrate them and the lost harmony between Colonna and Carafa by placing a funerary inscription with the coats of arms of the two families.
In 1675, when Collegiata di S. Maria Maggiore was being redesigned, Giovanni Battista Gaulli was working at the ceiling of il Gesù, his masterpiece, but he accepted a minor commission by the Cesarini and he painted the wall of a chapel behind a wooden crucifix. He portrayed Mary and two other women as if the crucifix was part of the painting. The combination of different art forms and materials in the decoration of chapels was typical of that period. 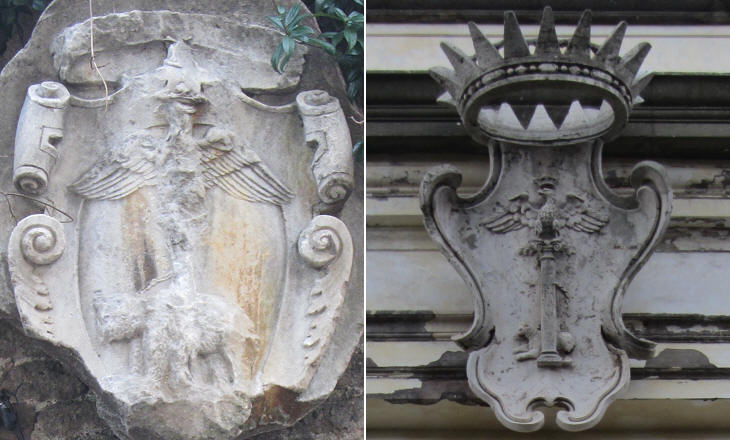 Coats of arms of the Cesarini at the entrance to the town (left) and on the façade of Collegiata di S. Maria Maggiore (right)

The coat of arms of the Cesarini caused some criticism because of its components, which seemed to be "borrowed" from those of more important families. According to a popular saying: "After they have given back the eagle to the emperor, the column to the Colonna and the bear to the Orsini, the Cesarini are left with just the chain (of the bear)." 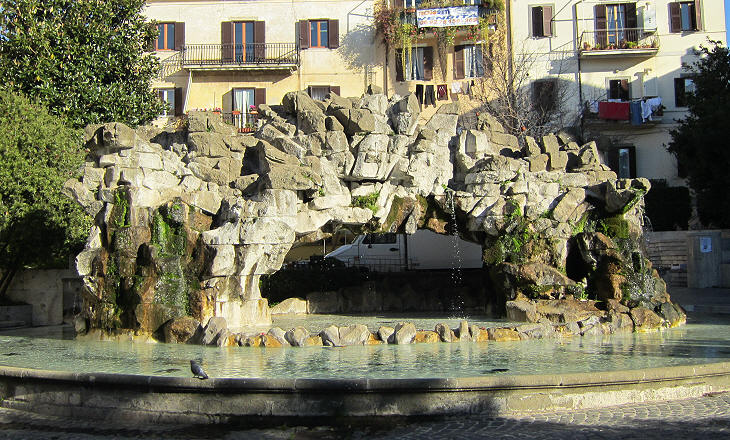 The Cesarini found great difficulty in building an aqueduct at Genzano, because that town is on the ridge of a volcanic crater and it was difficult to find a source of water which was located on higher ground. Lanuvio is situated at a lower level than Genzano and the Cesarini reactivated a Roman aqueduct which carried water to a large fountain outside the entrance to the town. It was designed by Carlo Fontana, a scholar of Bernini, who was inspired by his master's Fontana dei Quattro Fiumi. The fountain was completed by the statues of two snakes and it was meant to represent the cave where the ancient rites at Juno's sanctuary took place. 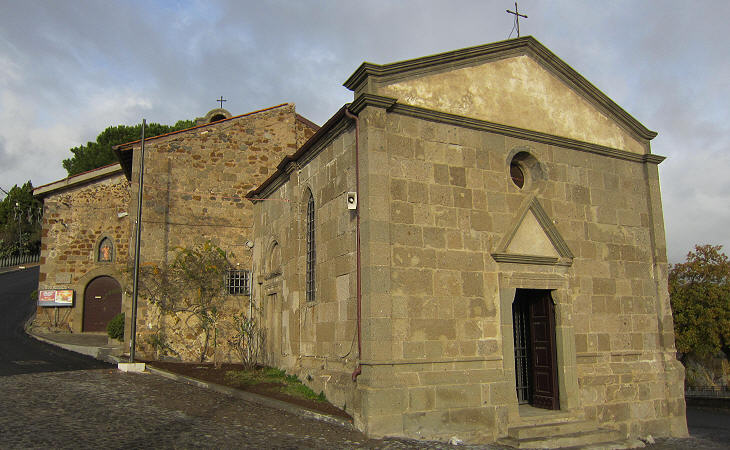 This small church half a mile from Lanuvio was built to house a miraculous image; its exact date of foundation is unknown. Its current aspect is mainly the result of a restoration/enlargement of 1523 which gave the interior a typically Florentine Renaissance appearance, because of the contrast between white walls and the black stone utilized to emphasize architectural elements. 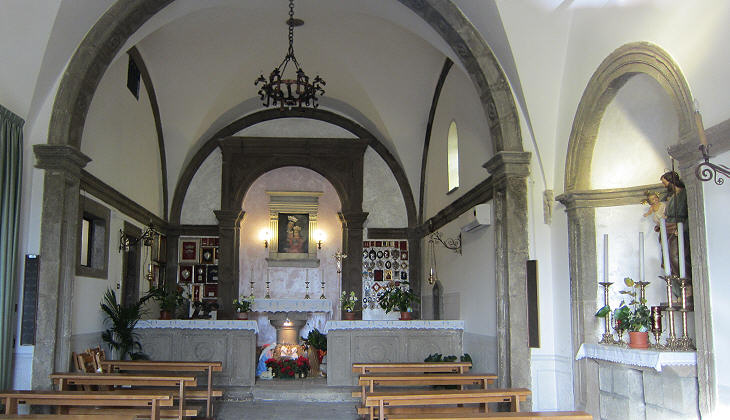 Next step in your tour of the Environs of Rome: Other Castelli Romani