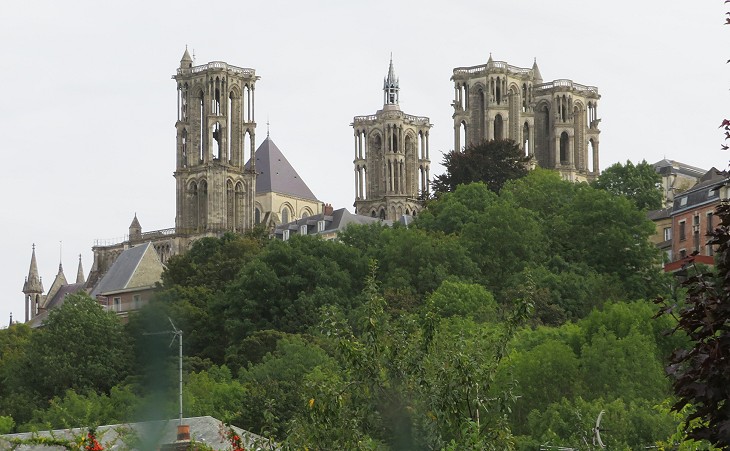 The Cathedral on the hill (it calls to mind Orvieto)

Laon is situated upon a lofty and almost isolated hill crowned by the noble Cathedral of Notre Dame.
John Murray III - Hand-book for Travellers in France - 1843
There are few towns in France more full of interest than Laon, and the picture of the ancient city crowning a mighty hill with the many-towered mass of its cathedral is not easily forgotten.
Thomas Graham Jackson - Gothic Architecture in France, England, and Italy - 1915
Laon is NOT yet a UNESCO World Heritage Site and a visit to the town is still an enjoyable experience. 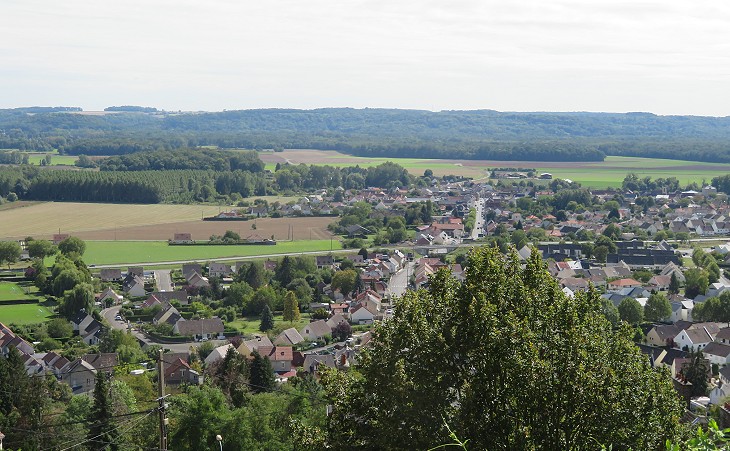 There are many fine points of view here and perhaps none of them are more pleasing than those gained from the summit of the ramparts. The landscape is extensive and varied. Vineyards clothe the slopes of the hills, the plains are covered with cultivation, the earth seems literally teeming. (..) In March 1814, a battle which lasted 2 days was fought between the Allies commanded by Blucher and Witzingerode who occupied the town and neighbouring heights and the French army much inferior to them in numbers. Here the success of Napoleon was arrested for the first time in the campaign and he was compelled to retire towards Soissons with a loss of 6000 men and 46 cannon. Murray 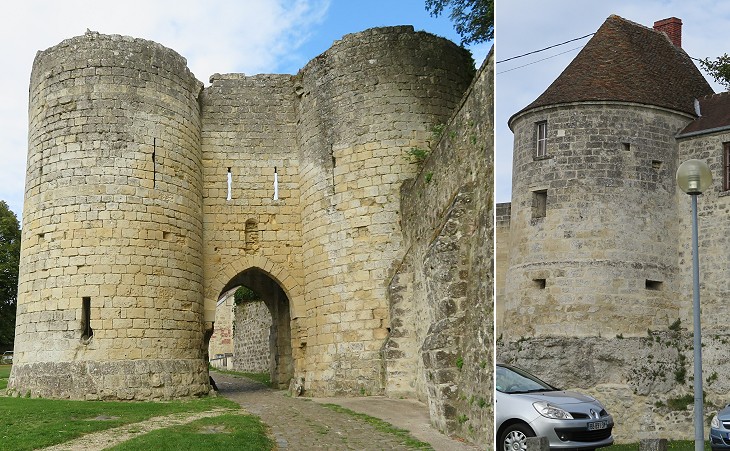 (left) Porte de Soissons (XIIth century) at the western end of the town; (right) a nearby tower of the walls

The fine masses of the ancient walls and towers which encircle the town mixing with the rocks add much to its picturesque aspect. Murray
There were four places called Lugdunum: Lugdunum Batavorum or Leyden which was never an episcopal see; Lugdunum Gallicum or Lyons, an archbishop's see; Lugdunum Clavatum or Laon, and Lugdunum Convenarum or St Bertrand de Comminges, a bishopric in the south of France.
The Archaeological Journal - Volume XIV - 1857
We know very little about the Roman past of Laon, apart from its name by the Gallic suffix dunum which meant fortified site. In the IXth century the natural defence provided by the slopes of the hill was strengthened by walls which were first built around the Cathedral at the eastern end of the town (la Cité). They were eventually enlarged to include also its western part (le Bourg). 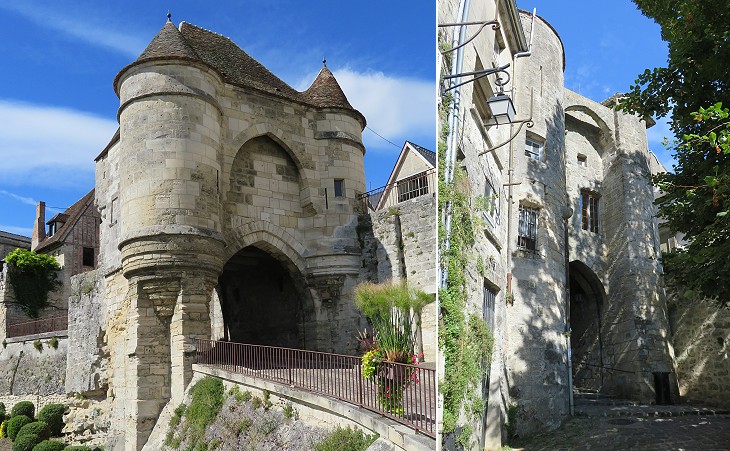 The town owes its importance to St. Remigius, Archbishop of Reims, who in 497 founded a bishopric palace and a cathedral at Laon. In the second half of the Xth century Laon became the residence of the Kings of France, who directly controlled only a fraction of the country. The kings, including Lothair who ruled in 954-986, lived in a lost palace near Porte d'Ardon. In 987 Hugh Capet took power and he made Paris the capital of the kingdom.
In 1112 the citizens of Laon obtained rights of self-government from the king, but these were challenged by the bishop. Notwithstanding this conflict the town experienced a significant demographic and economic development which permitted the construction of a new grand cathedral. 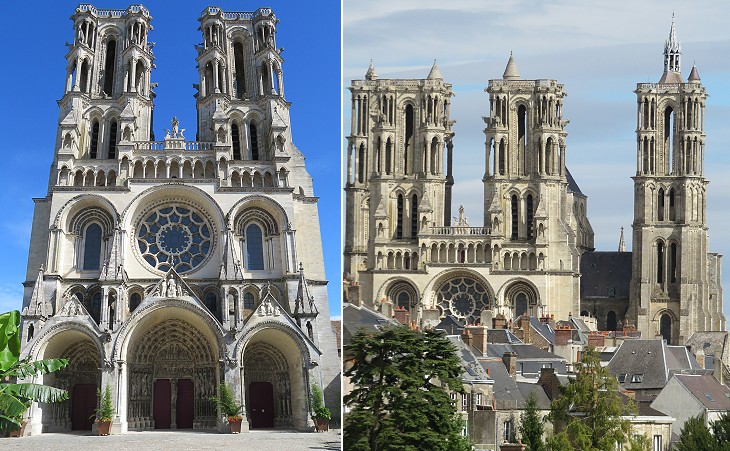 Cathedral: (left) façade: (right) from a distance to show also the transept towers and part of the lantern tower

This edifice is in a very pure and simple Gothic style much resembling Salisbury. (..) It has five towers. (..) The facade, with its great receding cavern-like portals and arches, is singularly venerable and the traveller will do well to mark its outline, for he will here see, in its simplest aspect, the type which at Rheims is expanded to the highest grade of decoration and exuberance. Murray
It is remarkable, and significant of the cooperation of bishop and commune in the pious work, that some of the grandest among the new cathedrals are in towns like Laon, where the bishops had formerly been most fiercely opposed. (..) The cathedral of Laon, which in many respects resembles that of Paris, dates from the last quarter of the 12th century. The older cathedral was burned by the citizens in 1112, when their promised charter was refused and they rose and slew the bishop. It seems to have been repaired in 1114 (..) but about 1160 an entirely new building was begun by Bishop Gautier de Mortagne. (..) All this seems to have been finished by 1205. (..) The statuary of the portals is modern. (..) The towers at Laon are highly original. Those of the façade front are extraordinarily massive, with deep projecting buttresses up to the roof level. Their projection is disguised by the pedimented gables over the portals which are brought forward to the face of the buttresses. The next stage has in the centre a rose window under a round arch between two pointed single lights, all similarly recessed between the buttresses. Then comes the usual arcaded gallery, with which the nave gable is hidden as at Paris, Chartres and Reims. Jackson 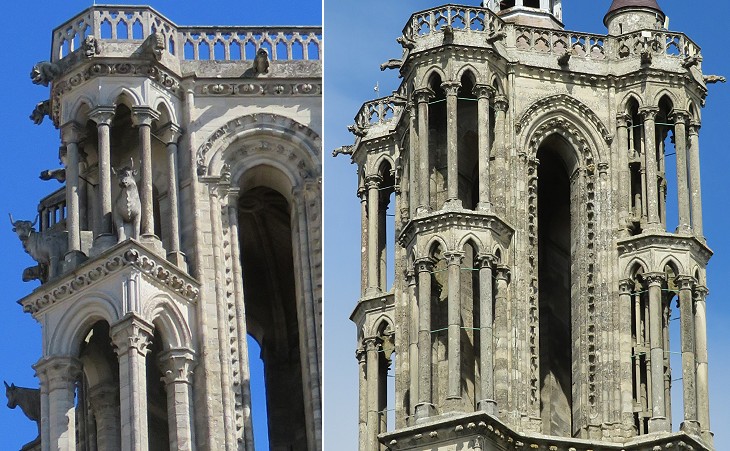 Above the gallery the towers break into octagons, with projections at the angles carrying open tabernacles on colonnettes, square in plan in the first stage, octagonal in the second. In one of these a spiral stair on colonnettes is managed, and from between the colonnettes of them, all peep out the oxen which commemorate the legend. (..) A crocketted spire between four spirelets surmounted each of the four towers. (..) They have now all disappeared, but that on the Tour de I'Horloge lasted till the Revolution, when it had to be removed, being dangerously out of the upright. (..) During the last century the towers threatened ruin, and extensive repairs had to be undertaken, involving much reconstruction and underpinning, and the antiquity of the building has in consequence suffered considerably. Jackson
(*) At Laon I have been told by a cleric of good character, who had the duty of carting wood for the repair of the fabric of the church, that in ascending the hill one of the oxen through weariness broke down. The cleric, being much vexed with the ox and unable to get another to put in its place, behold, suddenly an ox was seen running up, as if purposely offering itself to help in the work. And when he had with the others speedily drawn the cart right up to the church, the cleric was very anxious to know to whom he should return the strange ox. But as soon as the ox was unyoked, it did not wait for anyone to lead it or to urge it forward, but returned quickly to the place from which it came.
The Autobiography of Guibert, Abbot of Nogent-sous-Coucy (d. 1124) - translation by C.C. Swinton Bland 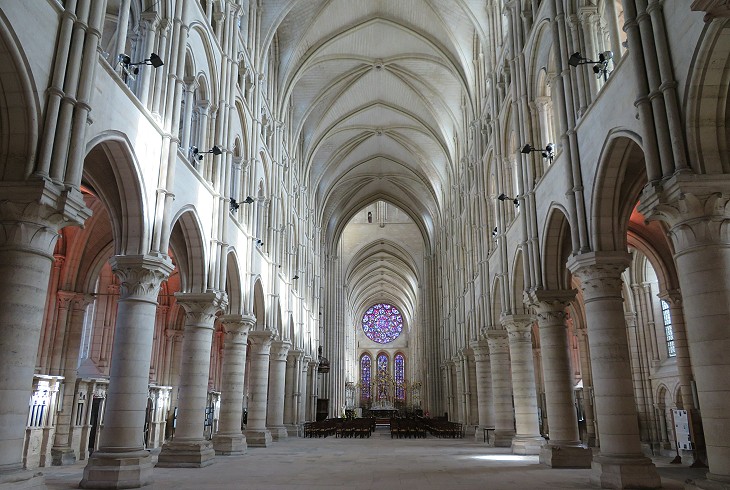 The choir like our English cathedrals ends square (e.g. in the Lady Chapel of Winchester Cathedral). The circular window is remarkable for its size and for its painted glass of which there is more in the choir. Murray
The arches are pointed everywhere, and rest on mono-cylindric columns as at Paris. The vaults are sexpartite; the vaulting shafts rise from the nave capitals, in groups of five shafts and three alternately, corresponding to the alternation of the vaulting ribs. (..) Indeed throughout the building there is a kind of roughness, virile but a little clumsy and heavy-handed, which has something in common with Norman work. (..) It is not known who was the architect; one may imagine him a northerner, of a different school from those who designed the cathedrals of Soissons and Reims. Jackson

At the ends of the transepts is the cross gallery at triforium level, formed by returning the arcade, which occurs at Caen, Cerisy-la-Foret, and Winchester. Jackson
The depiction of the Seven Arts is not unusual in churches as they represent instruments to foster progress in the knowledge of God, yet it also indicates the presence of a society of bourgeois, merchants and artisans seeking a lay progress of mankind. In a way it derives from the ancient floor mosaic depictions of Muses and Philosophers, also from a layout point of view. 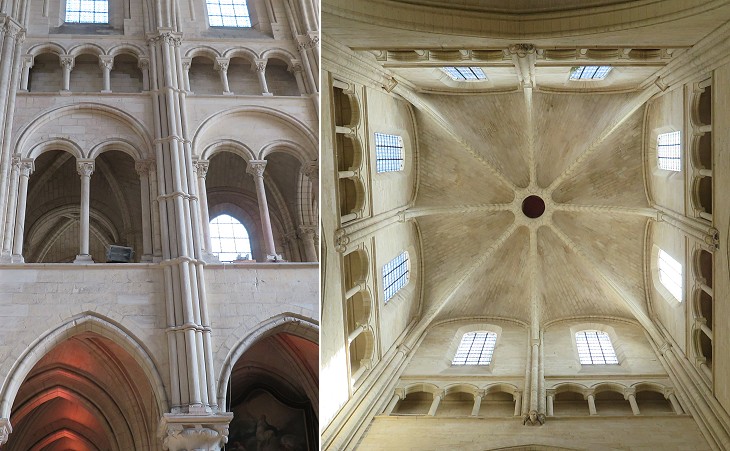 There is a vaulted triforium gallery, and above it the second triforium. (..) The central lantern is unusual in the Ile de France, but common in Normandy, and general in Anglo-Norman cathedrals (e.g. at St. Albans). Jackson
The Cathedral of Laon had an influence on the design of some German cathedrals, e.g. on the interior of that at Limburg am Lahn.

Cathedral: stained glass of the flat end of the choir with an optical effect of perspective; it is known as the "Rose of the Apocalypse"; it depicts in the centre the Virgin Mary and Jesus; on the left Prophet Isaiah and on the right St. John the Baptist; the same subject can be seen at Chartres and at the Saint-Chapelle in Paris

In 1870, during the Franco-Prussian War, the powder magazine of the fortress at the eastern end of the town, not far from the choir of the Cathedral, was blown up and the explosion greatly damaged this very large stained glass. Laon suffered less damage than other historical towns of North-Eastern France during WWI because it was occupied by the Germans in September 1914-October 1918 and the French refrained from shelling it. 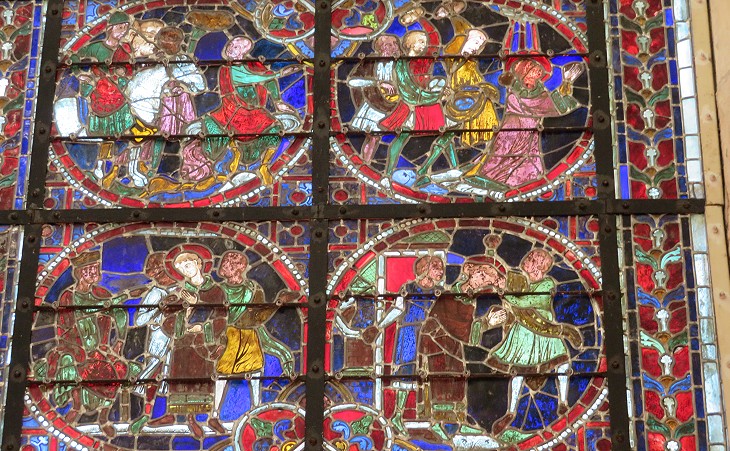 Cathedral: stained glass with scenes of the martyrdom of St. Stephen (you may wish to compare it with a stained glass in the Cathedral of Le Mans and with a XIIth century relief at Saint-Trophime at Arles)

The stained glass of the three narrow windows under the large circular one were less damaged; they had an educational purpose as they depicted the Passion of Christ and events from the Two Testaments and the lives of St. Stephen and St. Teophilus of Adana. The latter is known for having made a deal with the Devil to be appointed bishop, according to a legendary account which developed in France in the XIth century. Saint-Martin-au-Parvis; (inset) detail of the cornice under the roof

The Cathedral is much neglected and the cloisters have been demolished quite recently by the Vandalism of the municipality. Murray
I am sickened to speak of this shame of the Laonnois; their town possessed a rare monument, a monument of the kings of the seconde race. (..) The demolition of a "monument of the barbaric ages" is resoundingly and enthusiastically approved, and you hear the "hurrah!" of the brave municipal councillors of Laon who have made their assault on the tower of Louis d'Outremer.
Victor Hugo - War on the Demolishers - 1832 - translation by Danny Smith
During the XIXth century municipal authorities promoted a modernization of the historical town which led to the demolition of many of its medieval buildings.
Saint-Martin-au-Parvis was a small XIIth century Romanesque church very near the Cathedral (hence its name) to which a Gothic choir was added in the XVIth century. It was deconsecrated in 1791 and turned first into a small hotel and then in a ballroom. Today it houses a tribunal for individual disputes arising from an employment contract. 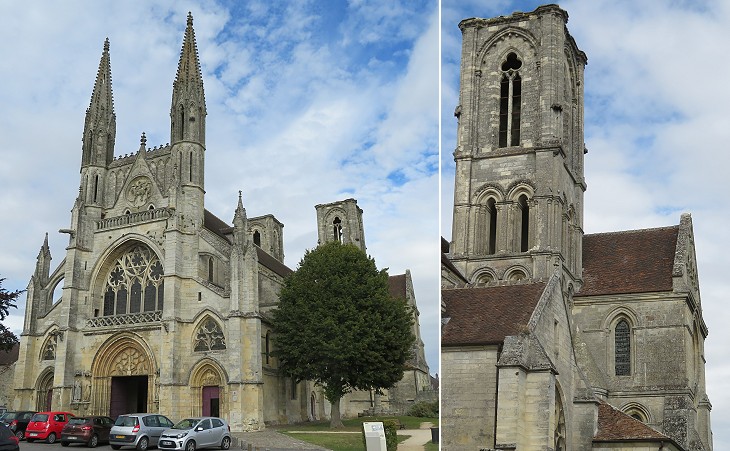 Saint-Martin: (left) façade; (right) one of the bell towers

The Church of St Martin on the side of the town opposite to the cathedral is chiefly remarkable for its two fine and lofty towers. Murray
We must not overlook (..) the early church of S. Martin with its square east end like the cathedral. Jackson
Unfortunately the church and the adjoining facilities were greatly damaged by Allied bombings in 1944. The image used as background for this page shows a a side portal of Saint-Martin.