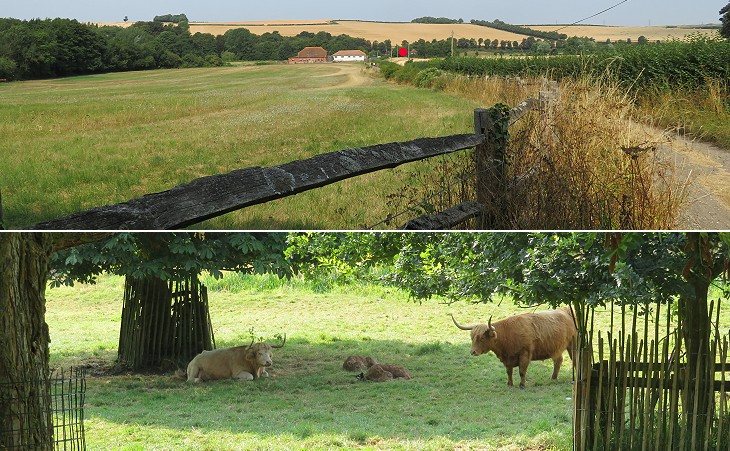 English countryside at Lullingstone, near Eynsford, Kent; the red dot indicates the site of the Roman villa

English summers are no longer what they used to be. On the day I took these photos (July 26, 2018) temperature reached its summer peak (35.3 C - 95.5 F) in Faversham, Kent and it must have been at similar high levels in Lullingstone. The Highland cattle which is bred near the Roman villa did not have strength enough to venture in the sun. The weather however was appropriate for visiting a Roman villa which in theory is designed for a Mediterranean country, e.g. Villa di Poppea near Pompeii. 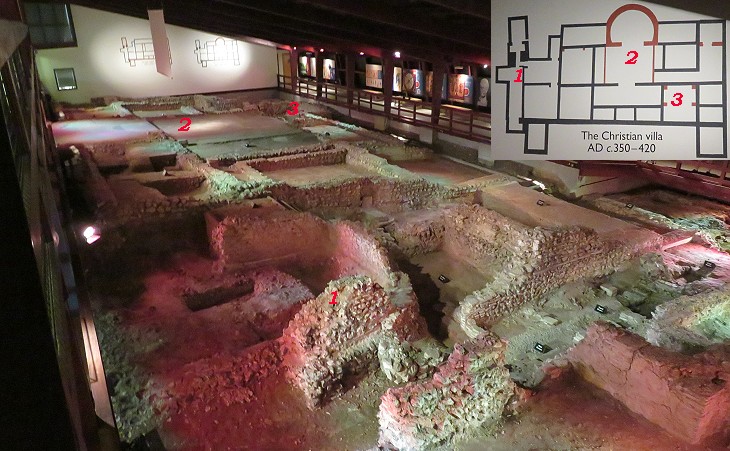 Visitors to the villa today can still view the spectacular mosaics and prints of the rare wall paintings, a heated bath-suite and a "house-church". A specially commissioned light show brings the villa to life, and galleries display Lullingstone's fascinating collection of Roman artefacts. Kids will love trying on the Roman costumes and playing traditional board games from the period.
From the English Heritage website which owns the site.
The villa was excavated in the 1950s and its remains were sheltered under a light structure. In 2006-2008 a new permanent structure encased the villa. Light shows and videos run uninterruptedly and do not allow viewing the mosaics and the paintings under a steady light. See how the issue of protecting a Roman villa was dealt with at Fishbourne Palace near Chichester, at Ahrweiler in Germany and at La Olmeda in Spain. The Myth of Europa was popular throughout the whole Roman Empire yet archaeologists were intrigued by finding its depiction in a location so far away from the shores of Tyre in Lebanon where Zeus abducted the Phoenician princess. It indicates that the landlord who commissioned the mosaic was familiar with Latin writers and not only with Ovid who reported the event, but with Virgil too. The couplet Invida si tauri vidisset Iuno natatus, iustius Aeolias isset ad usque domos (If jealous Juno had seen the swimming of the bull, more justly would she have gone to the palace of Aeolus - The Oxford Handbook of Roman Britain) is a reference to the First Book of the Aeneid in which Virgil describes how Aeolus, the keeper of the winds, raised a dreadful storm at Juno's request. 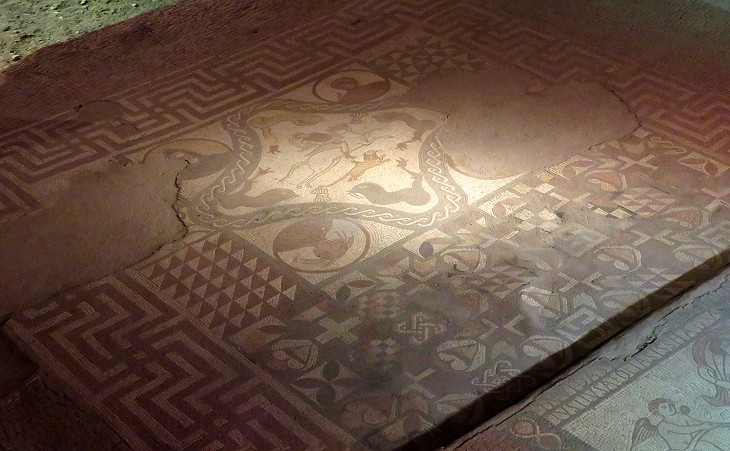 Mosaic of the rectangular part of the "oecus"

The landlord and his closest guests/relatives sat on couches in the apse of the oecus whereas other guests/relatives sat in the rectangular space. This arrangement is suggested by a floor mosaic found at Vienne for a hall having a similar shape. The floor mosaic of this hall is mainly based on geometric patterns, but the emblema, the central section with figures, is stylistically very similar to the mosaic of Europa and to other IVth century mosaics which were found at Low Ham, Somerset. 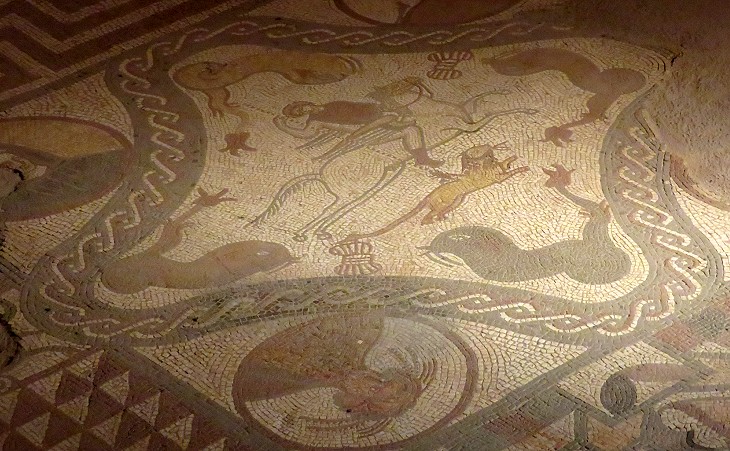 Fine mosaics depicting Bellerophon have been found at Girona in Spain and at Autun in France. That at Lullington is based on a much simpler design, but is consistent with the traditional iconography of the hero who is portrayed riding Pegasus and killing Chimera, a fire-breathing monster. Overall the mosaics of the oecus suggest that a literary conversation went on between the landlord and his guests. This at a time when storm-clouds were beginning to gather on the Roman Empire. The image used as background for this page shows a detail of another mosaic which depicts a Solomon's knot. 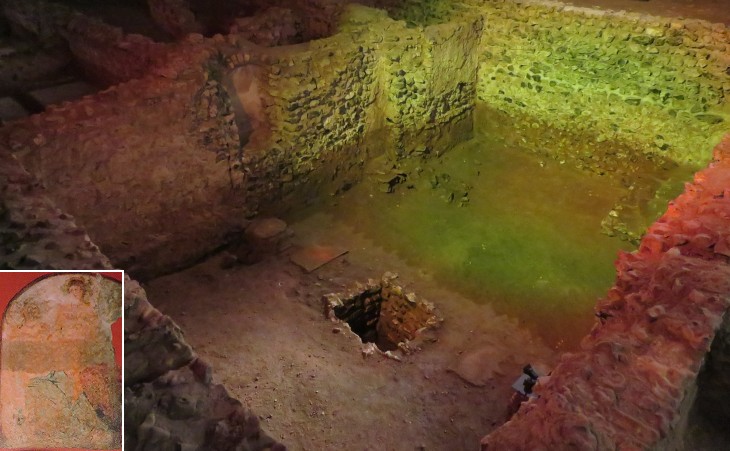 In 380 Emperor Theodosius declared the Christian faith (in its Nicene creed) the sole religion of the Roman Empire. At that time probably Christians were the majority in most provinces of Empire, but not so in parts of Gaul, in Germany and in Britain. In particular members of the upper classes continued to follow traditional beliefs and values and thus very few Early Christian objects were found in these countries. This explains the interest with which archaeologists investigated a room at Lullingstone because its more recent frescoes suggested it had been a Christian place of prayer. 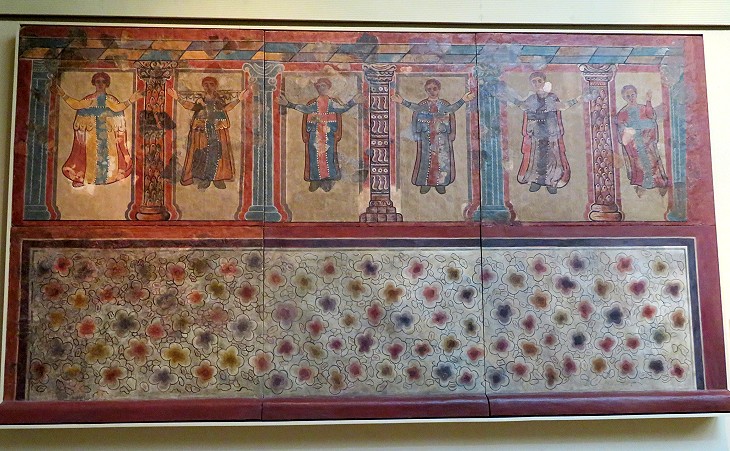 British Museum: fresco from the Prayer Room of Lullingstone

Because of their historical importance two frescoes were removed and placed in the British Museum. One characteristic which makes them so important is that they are not associated with a funerary context. In that shown above six men in rich costumes are portrayed in the act of praying inside a fake architecture, similar to what can be observed in Christian sarcophagi, e.g. at Arles. The exhibit at the British Museum is the result of thousands of plaster fragments being pieced together to produce the figures of praying men. The large crosses of their costumes are rather unusual in the Christian iconography of the time, which was based on the traditional attire of the Roman priests who wore a white toga with a broad purple stripe on its border, worn over a tunic with two broad, vertical purple stripes (see some mosaics at Ravenna). British Museum: exhibits from Lullingstone: (left) fresco depicting a Chi-Rho, one of the earliest forms of Christ's monogram, combined with Alpha and Omega in a circle, which was found in the Prayer Room; (right) bust of a Roman personage, perhaps of Emperor Pertinax when he was governor in Britain in 185

The destruction by fire was very evident from the quantity of completely carbonized planks and lengths of wood that were found lying upon the latest occupation surface.
The Lullingstone Roman Villa - Second Interim Report - 1952
The villa was destroyed by fire, perhaps after it had been raided by Saxon pirates in the late IVth or early Vth century, and its existence was forgotten. 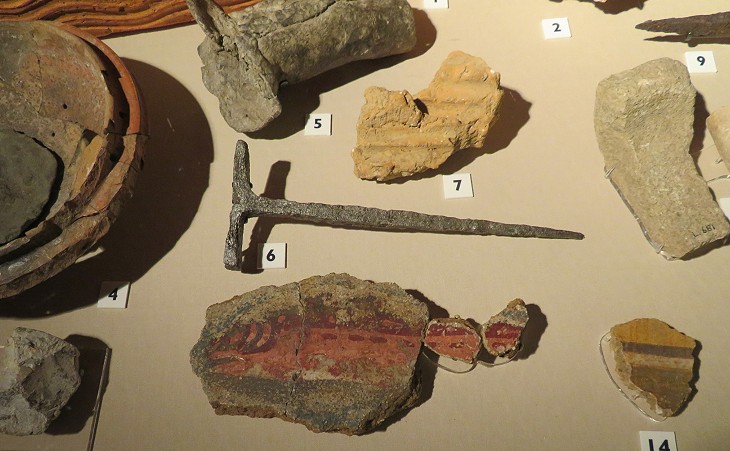