- The Fortifications of Valletta
(detail of a statue of St. Catherine of the Wheel in the parish church of Zejtun)

In late May 1565 a large Ottoman army landed on Malta and it laid siege to the three fortresses of the Knights which protected the main harbour of the island. The Knights managed to withstand Ottoman assaults throughout the whole summer, thus giving time for the Viceroy of Sicily to come to their rescue. In September the Ottomans left the island on learning the news that a Spanish relief army had landed on its northern coast. 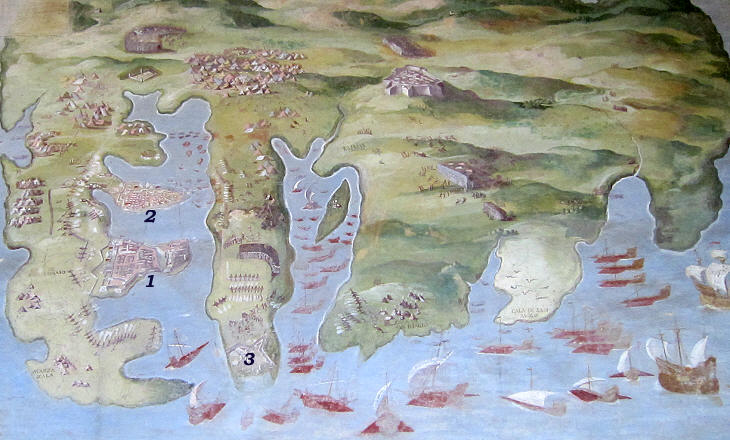 The Great Siege of Malta, fresco by Federico Zuccari at Palazzo Farnese in the town of Caprarola (Italy): 1) Borgo; 2) Senglea; 3) Fort St. Elmo

The (failed) Great Siege of Malta interrupted a long series of Spanish setbacks at sea (Battle of Preveza in 1538) and on land (failed siege of Algiers in 1541, loss of Tripoli in 1551 and loss of Bougie, a key port in Algeria, in 1555). 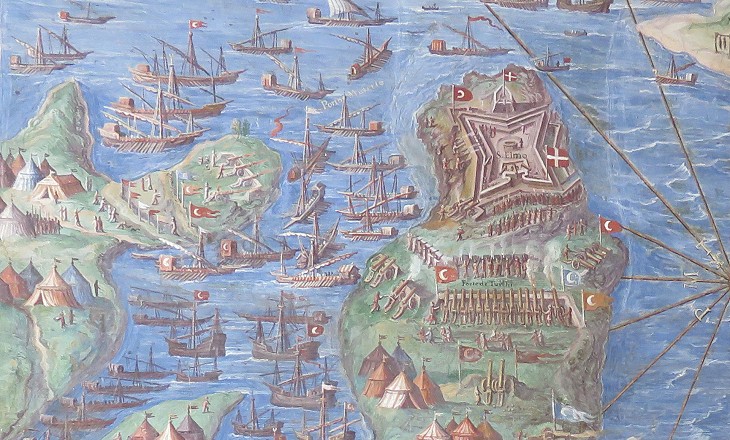 1582 fresco showing the entrance to the harbour of Marsamuscetto (Marsamxett) with Dragut Point (left) and Fort St. Elmo (right) at Galleria delle Mappe Geografiche in the corridors of Palazzo del Belvedere in Rome

The Ottoman first attack was on Fort St. Elmo which was located at the entrance of the two large harbours of Malta. The Knights managed to defend it for a month thus delaying the Ottoman siege of Borgo, the residence of the Grand Master. Fort St. Elmo was a well designed fortress, but it was dominated by a nearby hill where the Ottomans placed their artillery and it could be hit also from the opposite neck of land, which is named after Dragut, a famous corsair who was mortally wounded there. The fortress was virtually destroyed when the last knights abandoned it. 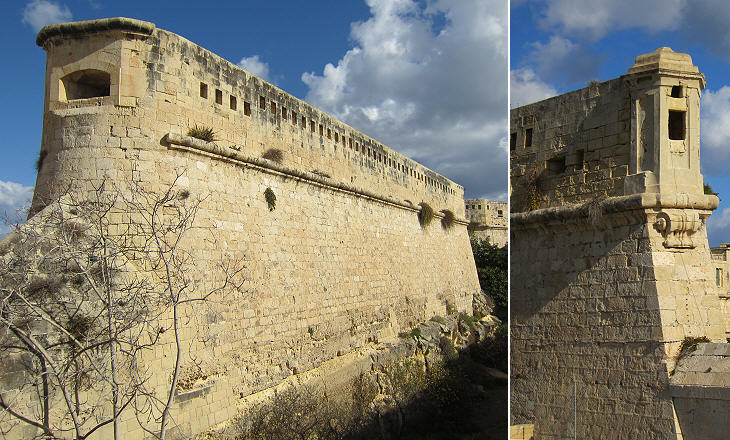 We have been admiring the wonderful strength of this place, both by nature and art.- It is certainly the happiest situation that can be imagined. The city stands upon a peninsula, betwixt two of the finest ports in the world, which are defended by almost impregnable fortifications.
Patrick Brydone - A Tour to Sicily and Malta in 1770
The entrance of the great port, and that of Marsamuscetto, present a most formidable aspect, being fortified with a series of works truly astonishing. The city of Valletta is situated on a promontory between the two ports; and on the point is the Castle of St. Elmo, commanding the entrance on each side. Here the faro or light-house is erected.
Richard Colt Hoare - A classical tour through Italy in 1790
The reconstruction of Fort St. Elmo started immediately after the Ottomans left Malta, because Grand Master de Valette was convinced of its key importance. The design of the fortress is similar to that of many Italian star forts, but owing to the shape of the ground, the bastions are very angled. Fort St. Elmo was eventually incorporated into wider fortifications built by the Knights and during the period of British rule. 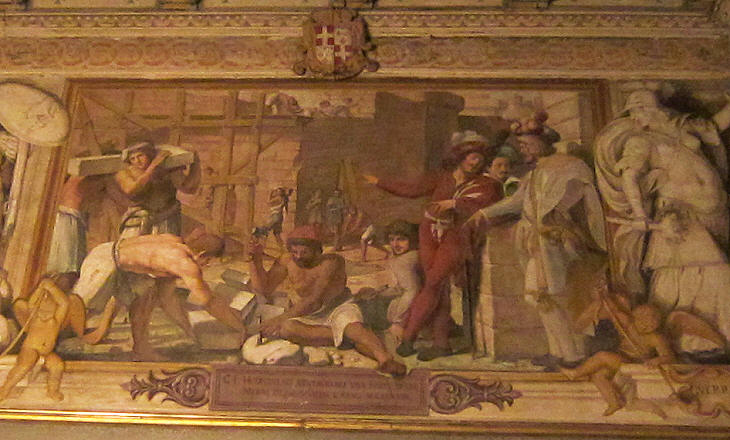 Construction of Valletta, fresco by Matteo Perez d'Aleccio in the Grand Masters Palace at Valletta

The Great Siege of Malta increased the reputation enjoyed by the Knights of St. John which had suffered from the 1522 surrendering of Rhodes and other possessions in the Aegean Sea.
Grand Master de Valette felt that the Order needed a more adequate location and he decided to build a new town on the hill where the Ottomans had placed their artillery to hit Fort St. Elmo, thus remedying the key weakness of the fortress. The town was named La Valetta (today Valletta) after its founder. 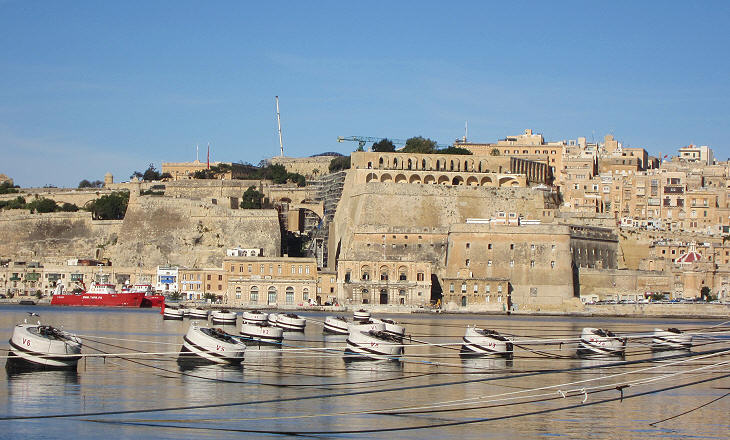 South-eastern fortifications seen from Borgo/Vittoriosa: (left) St. James' Bastion; (right) Sts. Peter and Paul's Bastion having at its top the porticoes of the Upper Barracks Gardens 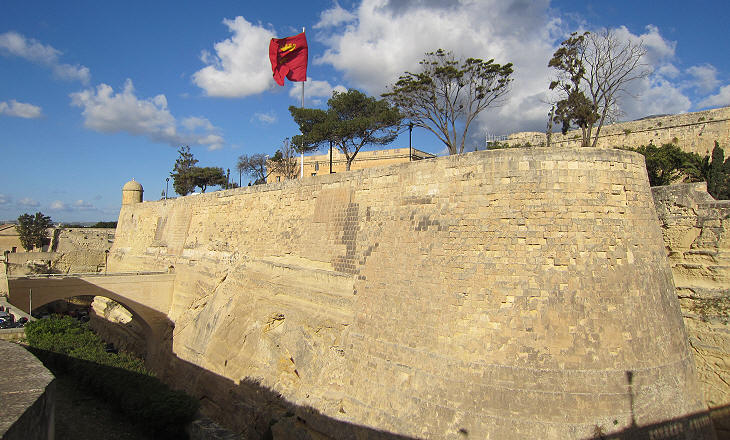 St. James' Bastion (the flag showing a golden rampant lion on a red background is the symbol of the City of Valletta - the sentry box is that which is shown in the image used as background for this page)

The defence of Valletta from attacks by land was based on two massive bastions named after St. John and St. James. Overall the main components of St. James' Bastion have not been modified significantly by later additions/modifications and by the opening of modern roads. The bastion itself had the shape of a gigantic orecchione (big ear), very similar to those built by Michele Sammicheli at Candia a few years earlier. 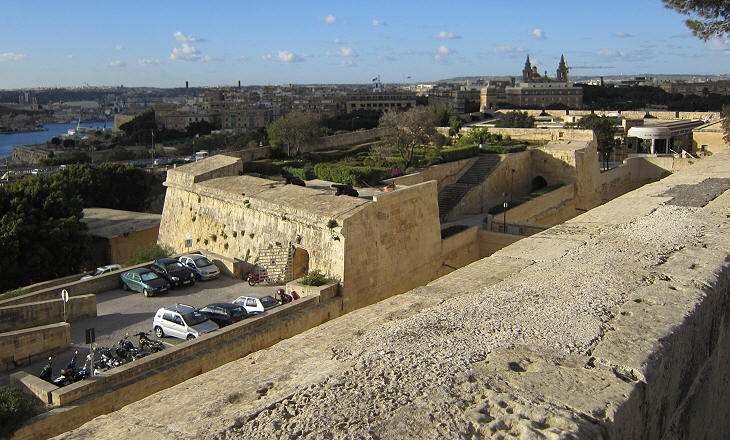 St. James' Counterguard and in the background Floriana seen from St. James' bastion 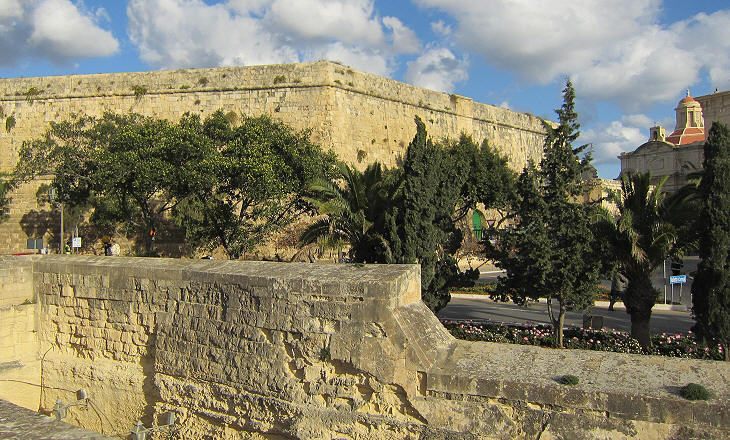 St. James' Cavalier (a defensible structure built on top of a bastion) and St. Catherine's to its right

A huge cavalier was the last resort for the defenders of St. James' Bastion. In 1686, probably because the 1683 failed Siege of Vienna had reduced the threat of an Ottoman invasion, the cavalier was turned into a granary by Grand Master Carafa. 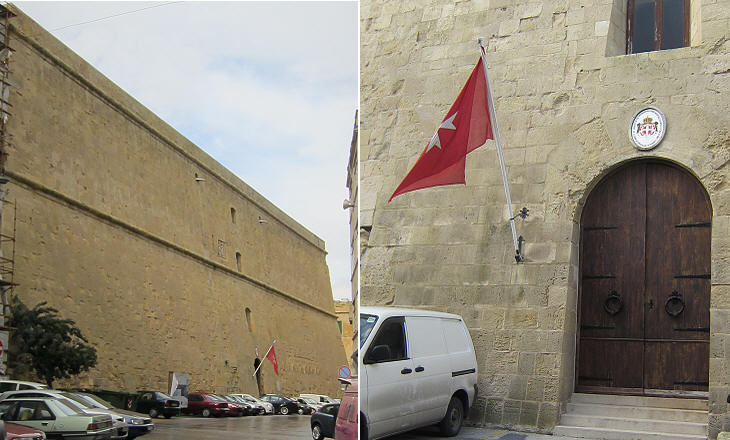 St. John's Cavalier which currently houses the Embassy of the Order of St. John to Malta

In 1798 the Knights surrendered their rights to Malta to the French and abandoned the island. The Order continues to survive and today its Grand Master resides in Rome at Villa Magistrale, former Italian Grand Priory of the Order and at Palazzo di Malta in Via Condotti.
The exact status of the Order according to international law is uncertain, but in recent years the number of states which have established diplomatic relations with it has grown to ca 100. The current full name of the Order is Sovereign Military Hospitaller Order of Saint John of Jerusalem of Rhodes and of Malta. 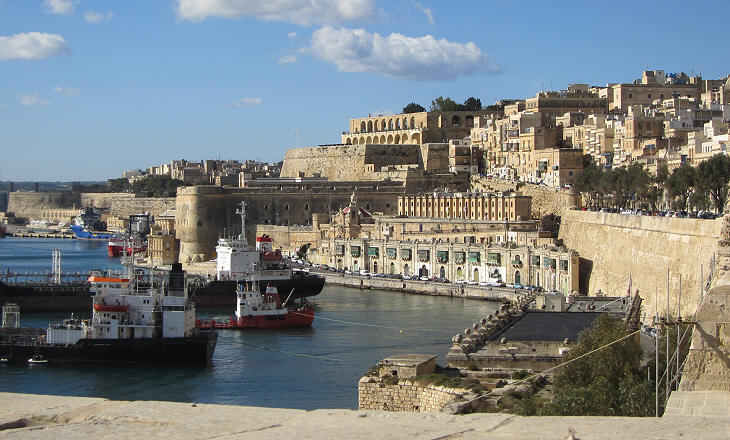 View of the old docks of Valletta and of Sts. Peter and Paul's Bastion from Lower Barracks Gardens

The peninsula upon which Valletta was built divides the natural harbour into two sections; the northern one (Marsamuscetto) is small and for some time was known as Quarantine Harbour, because of a lazaretto built on an islet. Today it is called Marsamxett Harbour. The southern section housed Porto delle Galere or Porto Grande, the actual harbour of the Knights. For this reason the fortifications of Valletta on this side are more imposing than those on the northern one. 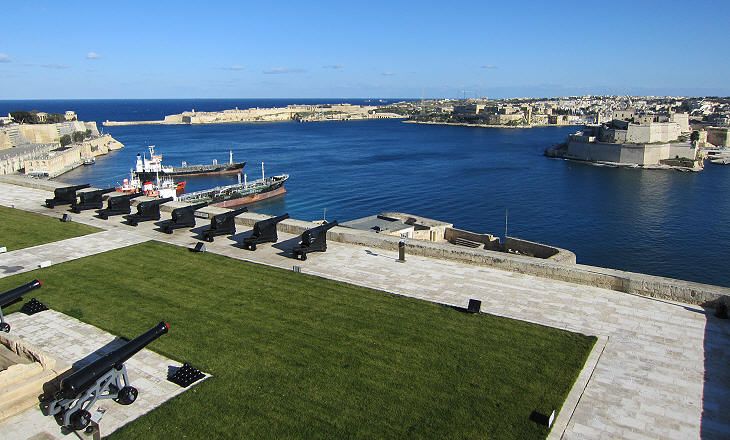 View from Upper Barracks Gardens at the top of Sts. Peter and Paul's Bastion: (below) Salute Battery; (opposite side of the harbour) Fort Ricasoli (left) and Fort S. Angelo (right)

In addition to protecting Porta Marina, the sea gate of Valletta which was demolished in 1885, Sts. Peter and Paul's Bastion contributed to the defence of Fort S. Angelo, at the tip of Borgo/Vittoriosa. Today the gardens built by the British on the top of the bastion provide the best view over the Knights' complex system of fortifications.
During WWII the British Operational Headquarters in Malta were located inside this bastion in underground rooms built by Grand Master Lascaris. 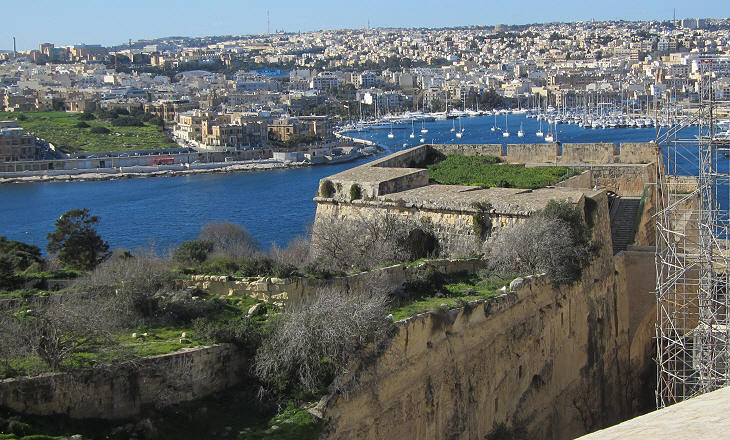 St. Michael's Bastion and behind it Marsamxett Harbour and the modern neighbourhood of Sliema

St. Michael's Bastion is the equivalent to Sts. Peter's and Paul's Bastion on the northern side of the land walls. While the fortifications of Valletta can still be admired almost as they were designed, the original gates are lost. Porta S. Giorgio was opened by Laparelli between the two main bastions; it was probably designed giving more importance to defensive requirements, than to appearance. In 1632 it was replaced by a second gate designed by Tommaso Dingli at the time of Grand Master de Paule. 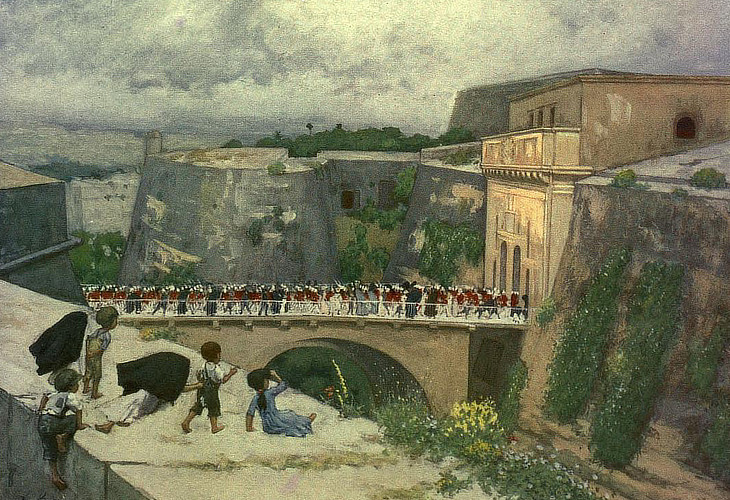 "Porta Reale", a 1910 illustration by Vittorio Boron for "Malta" a book written by Frederick W. Ryan. The illlustration has the following caption: "The gate and drawbridge over the ditch protecting the inner walls of Valletta. Rebuilt in 1853, and ornamented with statues of l'Isle Adam (the first Grand Master to rule in Malta), Jean de La Vallette, and Pope Pius V. , who contributed largely to the building of Valletta. Those who think of Malta as merely a barren rock can certainly not have visited it in early spring when luxuriant wild flowers cover the fields, road-sides, and the disused fortifications." 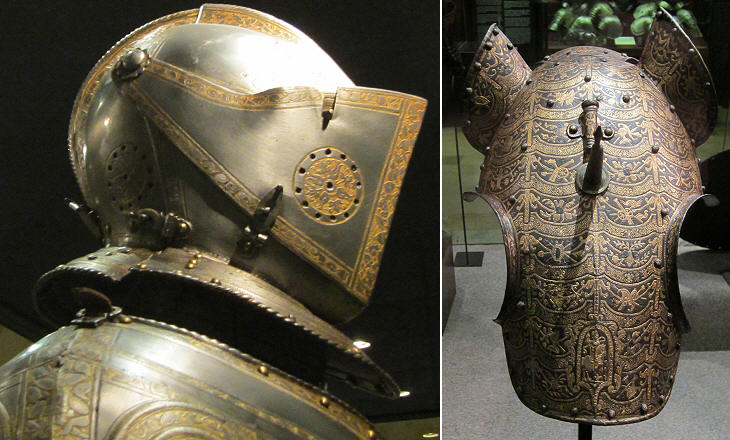 The Grand Masters' palace is a plain and simple structure, containing a small cabinet of pictures, and a museum of a few antiquities. (..) Adjoining is the arsenal, which contains an extensive collection of fine arms and armour, arranged with great taste. Opposite the entrance is a well-wrought cannon, the carriage of which is ornamented with two bronze figures of Furies. Colt Hoare
The Knights had little opportunity for showing their military skills as cavalrymen. The heavy armouries, some of them commissioned to Lombard makers, were utilized only for parades and tournaments or for being portrayed wearing them as in the portrait of Grand Master Alof de Wignacourt by Caravaggio (it opens in another window). 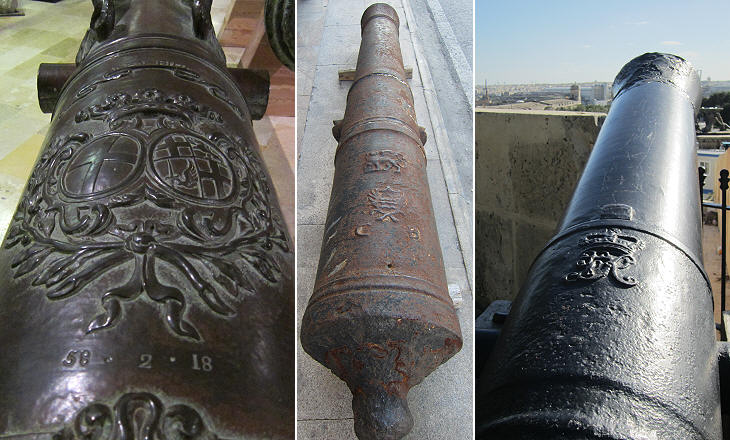 Effective artillery was the natural complement to solid bastions in ensuring the defence of Valletta. While other branches of warfare required physical exercise, courage and strength, the effectiveness of artillery was based on mathematical knowledge and advanced metallurgy. 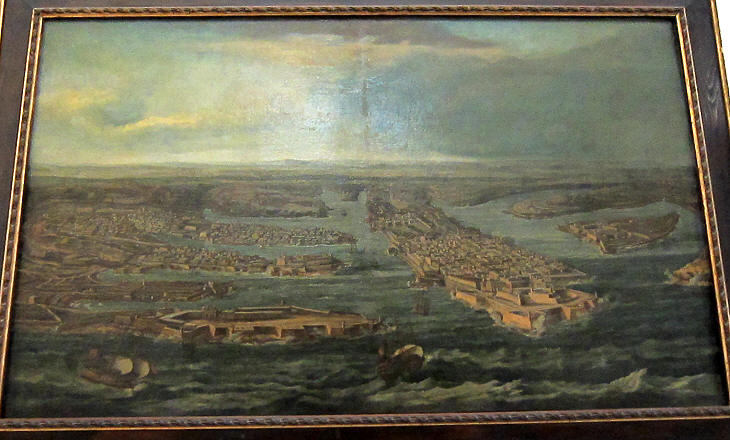 Overall view of the fortifications in the late XVIIIth century - Valletta Museum of Fine Arts: in the foreground Fort Ricasoli (left) and Fort St. Elmo (right)

On reviewing these numerous fortifications, they appeared to me too extensive for the population and military force of Malta, for it would require an army larger than the whole island could supply, to garrison the forts, and work the artillery with effect. Colt Hoare
In a military and naval point of view Malta is of great consequence to England and its acquisition whether we consider its fine harbour, impregnable fortifications, or its commercial advantage being a depôt for the Levant, or the necessity of a safe port for our men of war in that part of the Mediterranean, all prove its great importance.
George Cockburn - A voyage to Cadiz and Gibraltar up the Mediterranean to Sicily and Malta in 1810
The fortifications designed by Laparelli were never put to the test as the Ottomans did not make a second attempt to conquer Malta. In 1798 Grand Master von Hompesch surrendered Valletta to the French without fighting. Chronicles report that when Napoleon Bonaparte made his entrance into the town he pointed at its imposing bastions and said to one of his assistants: I am very glad that they opened the gate for us.