- The Churches of Valletta
(detail of a statue of St. Catherine of the Wheel in the parish church of Zejtun)

The first stone of Valletta was laid on March 28, 1566. Precedence was given to the construction of imposing fortifications which were designed by Francesco Laparelli, an Italian military architect. The construction of the first churches and palaces of the town was entrusted to Gerolamo Cassar, a Maltese assistant to Laparelli after the latter left the island in 1569. 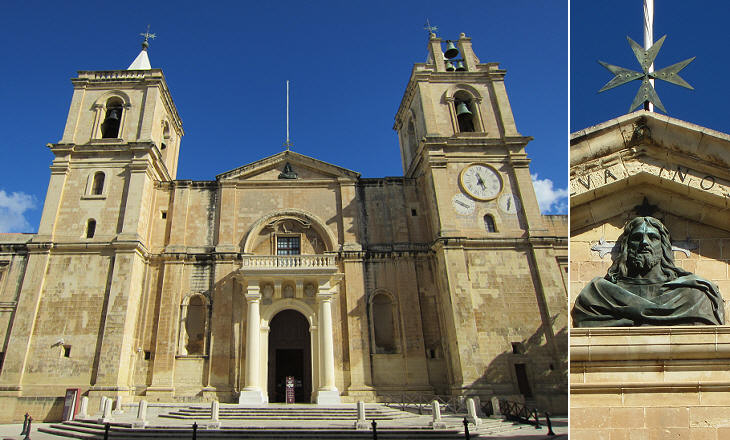 In 1573 Grand Master Cassière decided to build a conventual church for the Knights at Valletta; it was dedicated to St. John the Baptist, the patron saint of the Order. Cassar designed a façade which conveys a feeling of strength, as if it were a military facility. Luckily only minor changes were made to the façade in the following centuries and the building was spared by WWII bombings. In 1814, after the Knights had left Malta, the church became the Co-Cathedral of the diocese in addition to St. Paul's at Mdina. 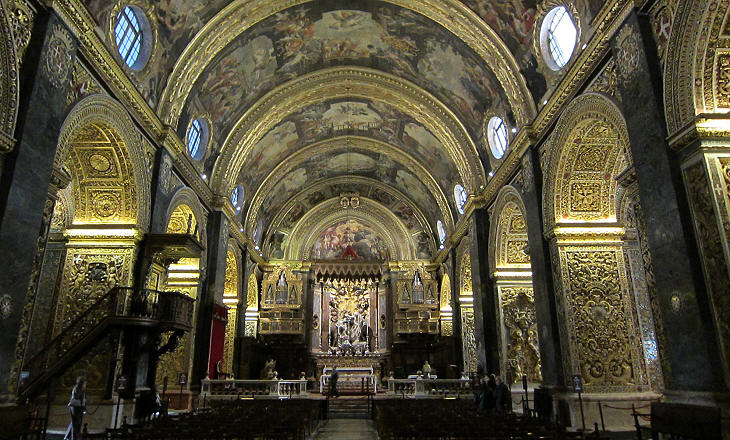 St. John's Interior (the statues in the apse are shown in a page dealing with Rome and Malta)

St. John's is a very magnificent church. It is entirely composed of sepulchral monuments of the finest marbles, porphyry, lapis lazuli, and a variety of other valuable stones; admirably joined together, and at the most incredible expence; representing in a kind of Mosaic the arms, insignia, &c. of the persons whose names they are intended to commemorate. In the magnificence of these monuments, the heirs of the grand masters and commanders have long vied with each other.
Patrick Brydone - A Tour to Sicily and Malta in 1770
From its paintings, tapestry, gilding, and marbles, the first view of this church is rich and impressive. (..) The sides are hung with fine tapestry, and the walls adorned with carved work, gilt, but in a heavy taste. In the right aisle of the church are several splendid monuments to the memory of the Grand Masters. (..) Beneath is a subterraneous chapel, containing different monuments of the Grand Masters. It was used at the period, when religious zeal, courage, and simplicity of manners, were the characteristics of the Order. In the chapel of St. John is a good picture, representing the decollation of the Saint, by Michael Angelo di Caravaggio (it opens in another window).
Richard Colt Hoare - A classical tour through Italy in 1790
The interior of St. John's combines the neat architectural structure designed by Cassar (one large nave with side chapels, but without transept and dome) with the elaborate decoration which was added in 1660-1680 by Grand Masters Rafael and Nicolas Cotoner. The Grand Masters and some of the most important Knights were buried in the church; initially in the crypt in rather simple monuments and, after the redesign of the interior, in the chapels. Details of some of the funerary monuments and of the chapels can be seen in other pages: Chapel of Aragon, Chapel of Italy, monument of Martin de Redin, monument of Annet de Clermont, Chapel of France, monument of Marcantonio Zondadari, portal of the Oratory, monument of Rohan de Polduc, monument of Nicolas Cotoner and monument of Ramon Perellos. 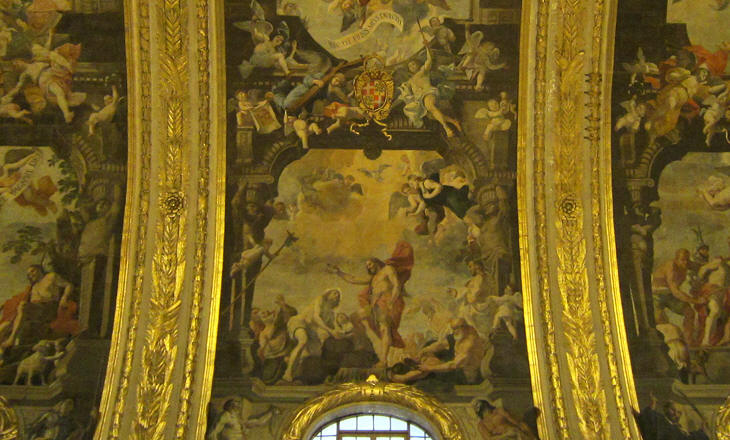 Baptism of Jesus by Mattia Preti

The roof is semi-circular, and bomb proof, and divided into six compartments, in which the hand of Calabrese has depicted the history of St. John, with a considerable degree of spirit and skill. Colt Hoare
In 1661 Rafael Cotoner commissioned Mattia Preti, an Italian painter aka Il Cavalier Calabrese, after the Italian region where he was born, the decoration of the entire vault of the church with scenes from the life of St. John the Baptist. Preti was a renowned painter who had worked for some thirty years in Rome, Naples and other Italian cities. He had experience in large decorative paintings as he was commissioned three frescoes for the apse of S. Andrea della Valle by Olimpia Maidalchini, sister-in-law of Pope Innocent X. 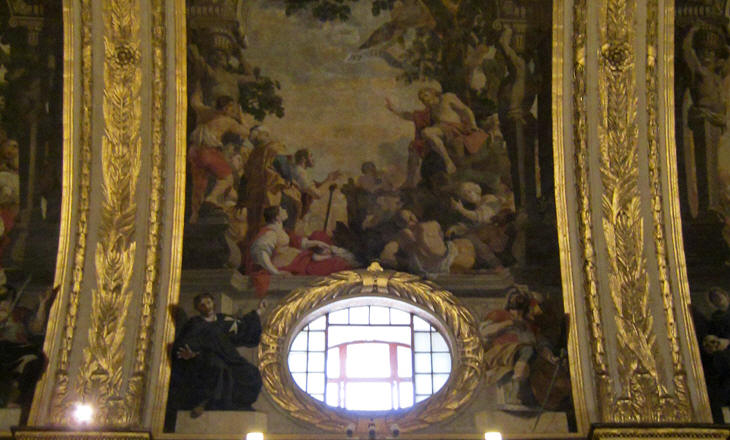 The Prophecy of the Messiah by Mattia Preti

Preti discovered that oil colours could be directly applied on the Maltese limestone of the vault. The use of this technique allowed him to utilize a wide range of colours and to make changes more easily. In five years he painted eighteen episodes of the life of St. John the Baptist. The Knights commissioned him many other paintings for the chapels and for other churches. Preti never left Malta where he died in 1699.

Pavement of St. John's Co-Cathedral and detail of a gravestone portraying Time

The pavement, in particular, is reckoned the richest in the world. Brydone
The pavement is divided into large compartments, composed of flat slabs of different marbles, which serve as sepulchral memorials of the knights. The arms and ensigns being emblazoned on these, in proper colours, the whole forms a new and striking kind of mosaic. (..) The treasure consists of numerous vases of massive gold, adorned with precious stones, &c. and was brought hither on the removal of the Order from Rhodes. In the church are some large chandeliers of silver, and one of solid gold. Colt Hoare
This church was very rich, particularly in gold and silver lamps, but the French plundered it of every thing moveable.
George Cockburn - A voyage to Cadiz and Gibraltar up the Mediterranean to Sicily and Malta in 1810
In 1603 a book by Cesare Ripa was published in Rome which set guidelines for the portrayal of Virtues and a host of other personifications, such as Time, Love, the Seasons and the Months, etc. These rules were adopted by all painters and sculptors and they were followed on Malta too. Marble inlay tombstones were popular in Sicily, e.g. at Monreale. 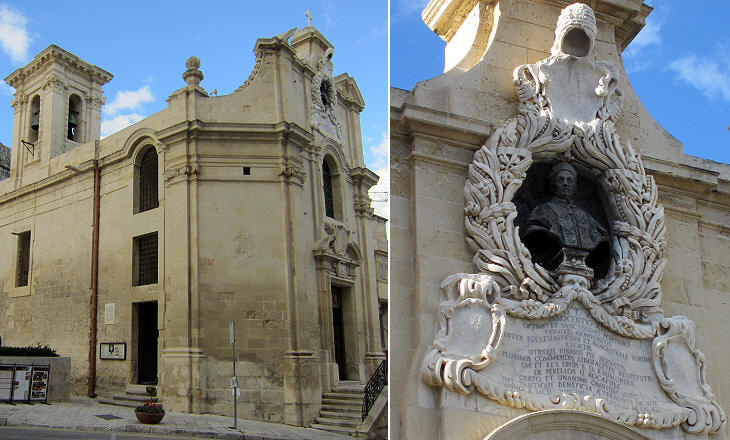 The bells never cease ringing here night nor day; the deep full sound of St John's is very fine. There are more saint days observed here than any where in Europe. Cockburn
Our Lady of Victories is the oldest church of Valletta and it was designed by Laparelli and Cassar at the request of Grand Master Valette to celebrate the 1565 Great Siege of Malta. A lengthy inscription explains why Grand Master Perellos placed a bust of Pope Innocent XII on the façade of the church in 1699. The Pope settled dissidiis (..) inter ecclesiasticum et magistrale forum, a quarrel about the jurisdiction of the Grand Master and of the Bishop of Malta.
This type of decoration made up of a bust, a long inscription and an elaborate background relief can be observed on other buildings such as the Auberge of Italy at Valletta and the main gate of Cottonera Lines at Bormla. 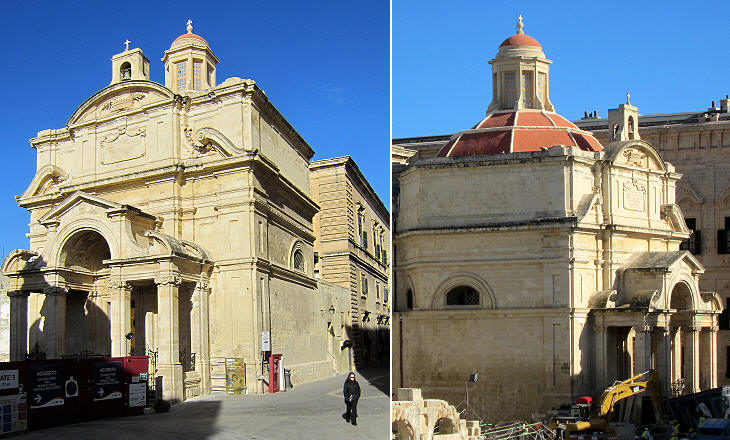 (left) St. Catherine's and Auberge of Italy adjoining it; (right) another view of the church showing Auberge of Castile behind it

St. Catherine's, the church of the Italian Knights stands opposite Our Lady of Victories and it was built a few years later. The portico however was added in 1713 and it was designed by Romano Carapecchia, an assistant to Carlo Fontana whose only work in Rome is the new façade of S. Giovanni Calibita.
St. Catherine's, Our Lady of Victories, Auberge of Italy, Auberge of Castile and St. James' Cavalier make up a very interesting example of late XVIth century architecture. 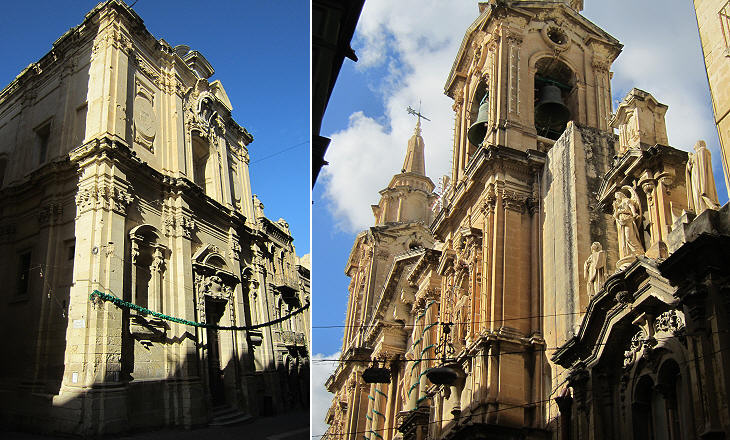 Laparelli and Cassar gave Valletta a very regular urban layout which however did not provide for large squares. The streets were relatively wide, but the churches which were built along them were enlarged and heightened in the following centuries, thus impairing a proper view of them. St. James', the church of the Castilian Knights, was modified by Giovanni Barbara in 1712; St. Paul's Shipwreck by Nicola Zammit in 1885 (February 10, the Feast of St. Paul's shipwreck on Malta in 60 AD is a public holiday). Circumcision of Our Lord: (left) detail of the façade; (right) main altar

The Knights belonged to a religious order, they took vows of celibacy, poverty and obedience, but they were not entirely happy about other religious orders settling in Valletta, which they regarded as "their backyard".
The Jesuits, however, were so powerful that Grand Master Verdale could not avoid the construction of a large Jesuit College as this was requested by Pope Clement VIII in 1592. Its church, similar to other buildings of the Order, shows an abundance of decoration. The great monogram having on top the head of a cherub is typical of Jesuit churches after it was placed on the façade of il Gesù in Rome. The image used as background for this page shows a marble inlay gravestone of a bishop inside the church. The Dominicans were the first to establish themselves in Valletta; this because of a 1571 bull by Pope Pius V who belonged to that order.
Red domes with white ribs are a characteristic of many churches of Malta even of those which were built in the XIXth and XXth century. Our Lady of Liesse (1740): (left) dome seen from Sts. Peter and Paul's Bastion; (right) detail of the façade

In general the dedication of Maltese churches does not raise questions. Our Lady of Liesse which was built by the French tongue calls for an explanation. Liesse is a village near Laon in Northern France where a sanctuary housed a wooden statue of the Virgin Mary and Child which was thought to have saved French Crusaders. The statue was destroyed during the French Revolution. 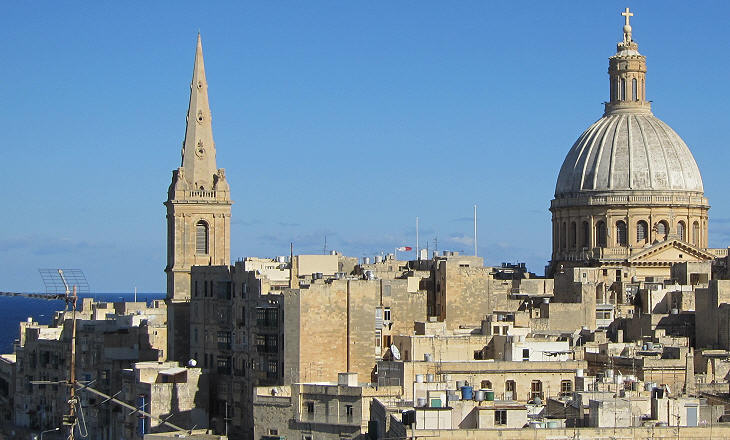 The hotel district of Malta is located in Sliema on the northern side of Marsamxett Harbour; the view of Valletta tourists have from their rooms is characterized by a large dome and an adjoining bell tower. They belong to two different churches and have nothing to do with the Knights.
Queen Adelaide spent the winter of 1839 on Malta and she was amazed to discover that after almost forty years of British rule, the island did not have a proper Anglican church. She made a donation and personally laid the foundation stone of a new church dedicated to St. Paul before returning to England.
The dome of Our Lady of Mount Carmel was built after WWII. It replaced a much smaller dome. The inhabitants of Valletta wanted such a large dome because their town, notwithstanding its being the capital of the island, did not have a dome comparable in size to those built in many small Maltese towns, e.g. Mosta, in the late XIXth century or early XXth century. 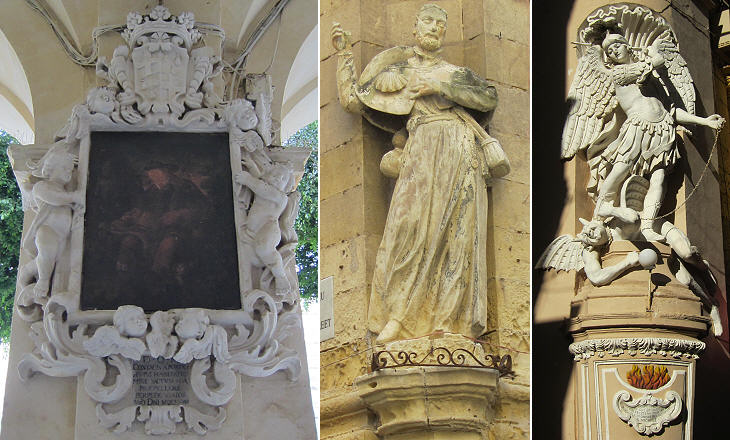