- Merida: Bridges, Aqueducts and Baths
(left - Mosaic at Italica; right - decoration at the Alcazar of Seville) Merida, unique in Spain, in some points a rival of the eternal city itself, rises on the r. bank of the Guadiana, which is crossed by a Roman bridge of 81 arches, 2575 feet long, 26 broad, and 33 above the river: this is indeed a bridge, and worthy of its builder, Trajan, a true Pontifex Maximus. From its long, low, and flat proportions, it has somewhat the air of a causeway. Repaired by Goth and Moor, it was not neglected by Philip III. (..) On an island in the riverbed up stream, is a Roman dyke of masonry erected to protect the arches against inundations. (..) The Roman and Moorish Alcazar towers proudly with its palm-tree over the bank, as seen from this spot. Some of the arches of the bridge were destroyed, April, 1812, during the siege of Badajoz, in order to impede Marmont's advance to the relief.
Richard Ford - A Handbook for Travellers in Spain - 1855 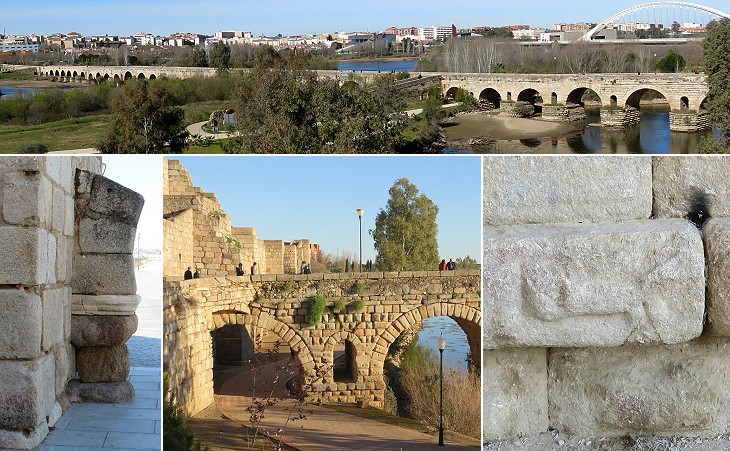 (above) Puente del Guadiana seen from the Alcazaba (fortress); (below-left) gate which gave access to the bridge; (below-centre) first arches which best preserve their original Roman structure; (below-right) a stone with a relief depicting a phallus having an apotropaic purpose, i.e. to chase evil spirits (see a similar relief on a Roman aqueduct at Anagni in Italy)

The bridge was built as part of the plan for the foundation of Augusta Emerita by Emperor Augustus in 25 BC. At that time Roman construction techniques were not as advanced as they became later on, thus the site chosen for the bridge was one where the riverbed was very large and shallow so that the arches did not need to be very high. You may wish to see Ponte di Tiberio at Rimini which was completed in 21 AD. 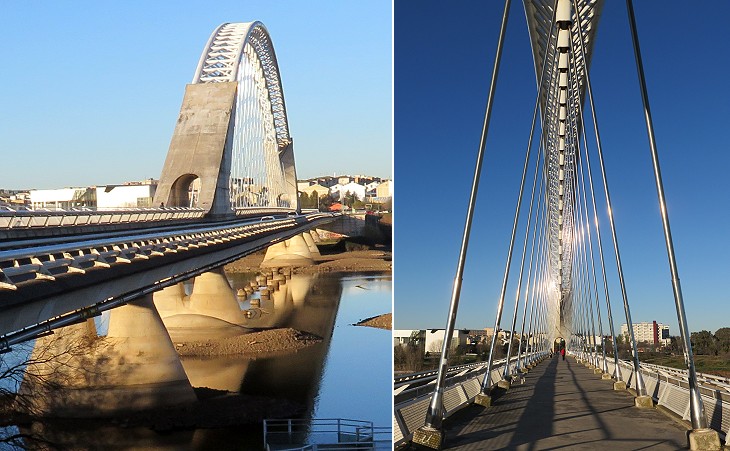 Puente del Guadiana was damaged and repaired many times and it was used by modern vehicles until December 1991 when a new bridge was inaugurated downstream. It was designed by Santiago Calatrava, a Spanish architect who eventually gained international fame for his suspended bridges. Today Puente del Guadiana is reserved to pedestrians. 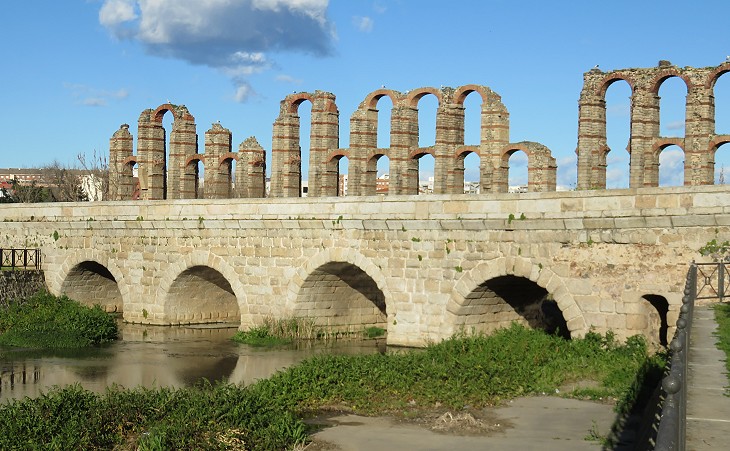 The Roman bridge of 4 arches which still crosses the rivulet Albarregas - Alba regia - is quite perfect, 450 ft. long by 25 ft. wide; thus built for eternity the original pavement exists in spite of a traffic of 17 centuries. It runs close to the great aqueduct. Ford
The Albarregas, a tributary of Guadiana almost surrounded the northern side of the ancient town and so a stone bridge crossed it to allow the passage of a road which linked Asturica Augusta (Astorga), a military town in northern Spain in a region which the Romans conquered in the late Ist century BC, with Merida and from there to Seville and the valley of the River Guadalquivir. 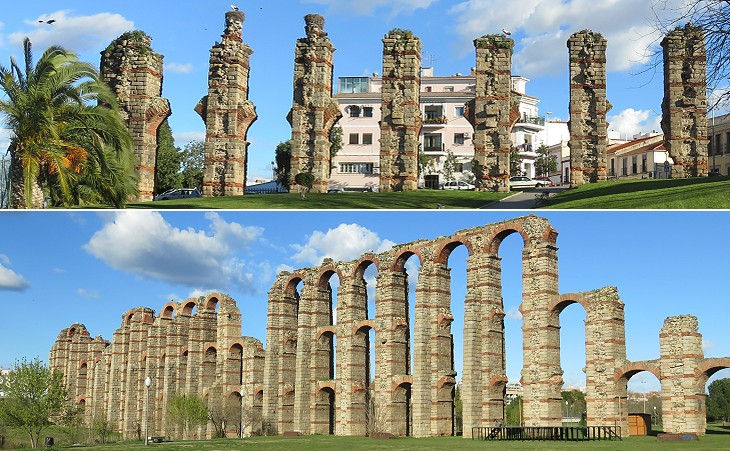 Views of Aqueduct of los Milagros

The great aqueduct is one of the grandest remains of antiquity in the Peninsula: 10 arches with 87 shafts remain, some 90 ft. high; they are arched in 3 tiers, and made of brick and granite, the latter worked in bossage, the former in string courses. The magnitude of these colossal monuments is very impressive; they are the standards which the Romans have left whereby to measure their ambition, power, and intellect. Below still trickles the streamlet, and so will it flow gently on, when even these gigantic ruins shall have crumbled away. There is indeed a sermon in these stones, and the idea of the once mistress of the world rules even in decay. (..) Well may the natives call these los Milagros; as to them indeed they are "miracles" and the works of giants, which they can scarcely even destroy. Here let the stranger sit and muse on a still evening, as we have often done. (..) These mighty relics, which have defied ages (..) have outlived the names of their founders, yet there they stand gray and shattered, but upright and supporting nothing now but the weight of centuries. Above them is spread, like a curtain, the blue sky, beautiful and bright as at the first dawn of the creation, for nature decays not; yet perhaps these arches never, even when perfect, were so touchingly picturesque as now. Ford
The design of the triple arches might have had a bearing on that of the arches in the prayer room of the Great Mosque of Cordoba. The aqueduct is not precisely dated because of lack of inscriptions, but it is generally thought to have been built towards the end of the Ist century AD. The layers of bricks are its most interesting feature; the use of bricks and stones can be noticed in many Roman aqueducts of that period, but the way they decorate los Milagros brings to mind opus listatum, a construction technique of the IVth century which characterized the decoration of the walls of Constantinople. 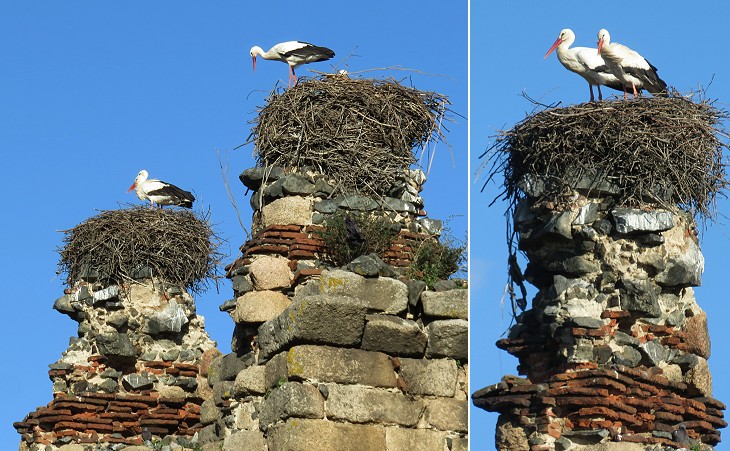 Storks at Aqueduct of los Milagros

This indeed is a lonely scene, a thing of the past; the wild figs amid the weeds and crumbling ruins attest the fertility of nature and the neglect of man: all is silent save when the frog croaks in the swamp, and the stork clicks his bill from the top arches, on which his unmolested nest is built. The stork is a common visitor in the warm localities of Spain, and as among the ancients and Orientals, is a privileged guest bird, and is never disturbed. It usually builds on the church belfries, and therefore is held out by the priests to the people as an example to be followed in selection of abodes. Ford 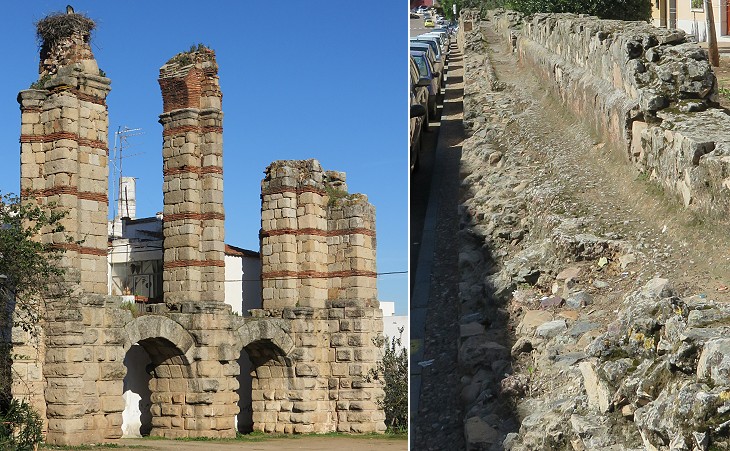 Los Milagros was only one of the many Roman aqueducts of Merida which poured in rivers; another crosses the Madrid road, of which only 8 shafts remain. (..) Utility and solidity were the principles of the Roman architecture; the construction of roads and aqueducts "made a name" to generals, whose severe, unpliable character delighted in defying and conquering natural difficulties, and the work gave occupation to their soldiers. Ford. See the Temple of Waters at Ziqua in Tunisia and the Pont-du-Gard in France. 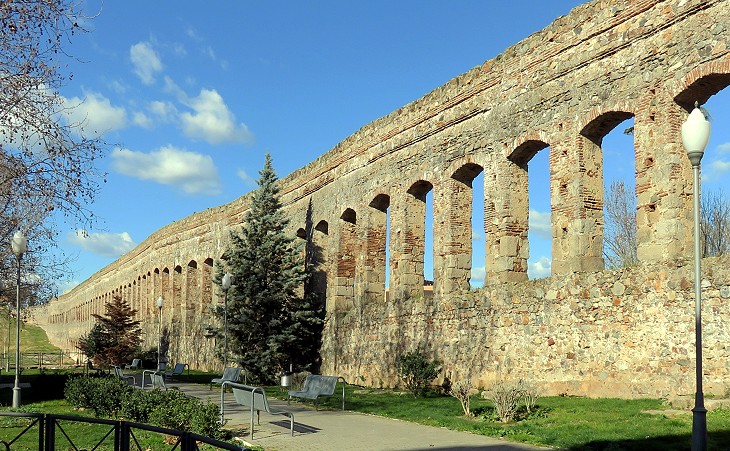 (The Roman aqueducts) shame, by their prodigal solidity, the rambling make-shift modern aqueduct built out of its relics by the Maestro Esquivel under Philip II, in which poverty of material keeps pace with the decay of power and taste. (..) Many aqueducts exist in thirsty Spain, as their public utility has led to their preservation, and to their repair when broken from military reason. Ford. See the Aqueduct of Les Ferreres near Tarragona and that of Segovia. 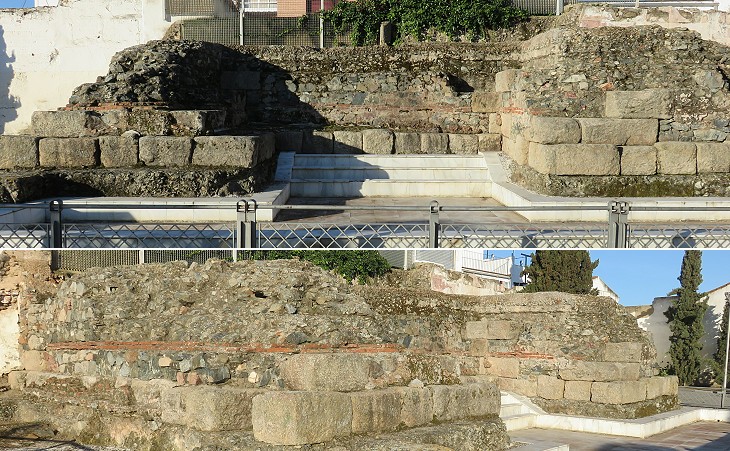 Los Milagros carried its water to a castellum aquae, a tower/cistern, at the northern end of Cardo Maximus, the north-south main street of ancient Merida, from which it was distributed to public fountains. The tower was decorated with a nynphaeum, a monumental fountain which most likely was embellished with statues (see the imposing Antonine Nymphaeum at Sagalassos in Turkey). 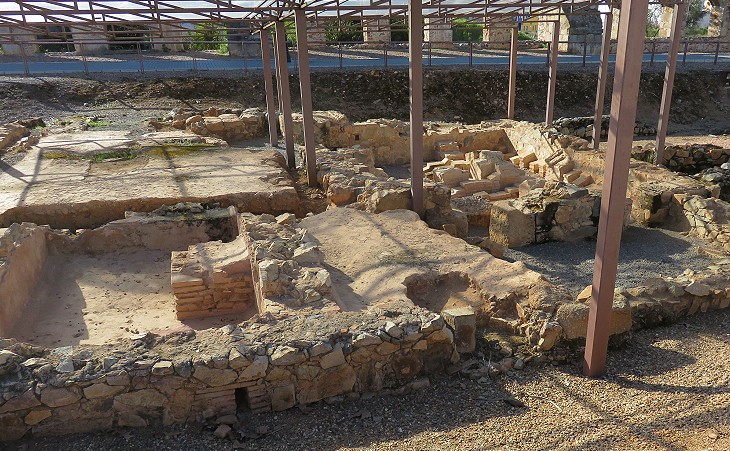 Baths near Aqueduct of San Lazaro: halls with a heating system

Archaeologists have identified six public and fifteen private bath establishments in Merida. Those near Aqueduct of San Lazaro were a public establishment with a palaestra, a courtyard for exercising. They are dated IInd century AD and were not far from the Circus. 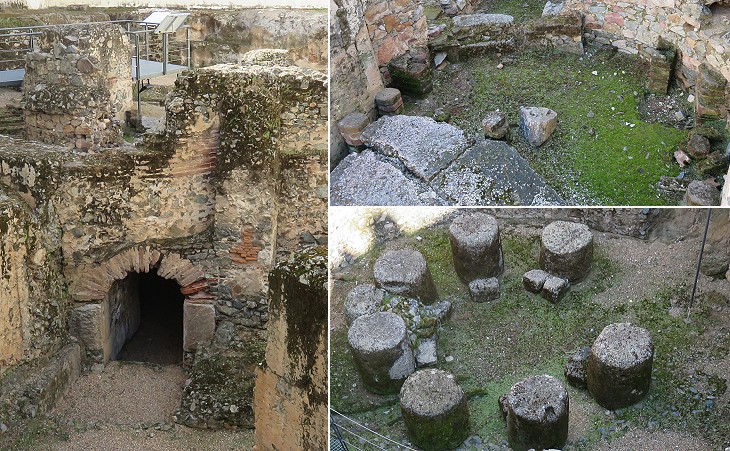 This site was discovered in the 1920s and archaeologists are uncertain about its purpose. It is named after its deep circular halls which were used for storing snow in the XVIth century. It is generally listed among the ancient baths of Merida, but some archaeologists suggest that also the Romans used it for storing snow.
Let us, I say, inquire how snow is preserved. The means of preservation have already been discovered; not content with racking wines of vintage, arranging them by flavour and age, we have devised means of compressing snow to overcome the power of summer, and of protecting it by the coolness of the icehouses from the hotness of the season.
Seneca - Naturales Quaestiones - Book IV - Translation by John Clarke 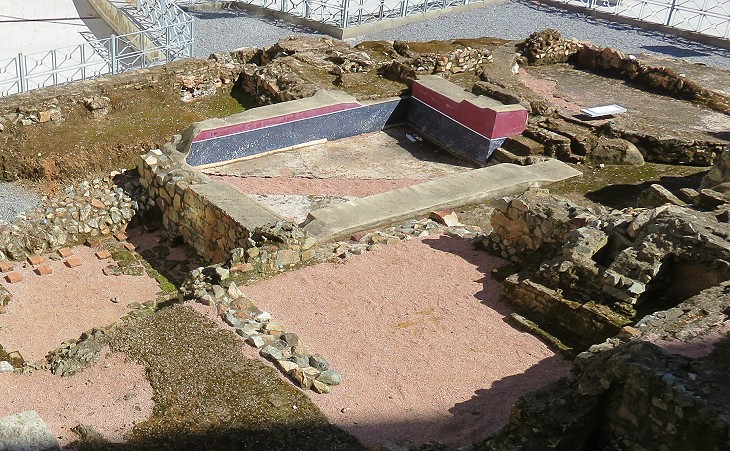 Public Baths at Calle Pontezuela with a restored pool

A public bath establishment has been identified near the northern entrance to the town. It most likely catered for travellers needing a rest, similar to Terme dei Cisiarii at Ostia. It is dated Ist century AD and there is evidence that it was still being used at the end of the IVth century. 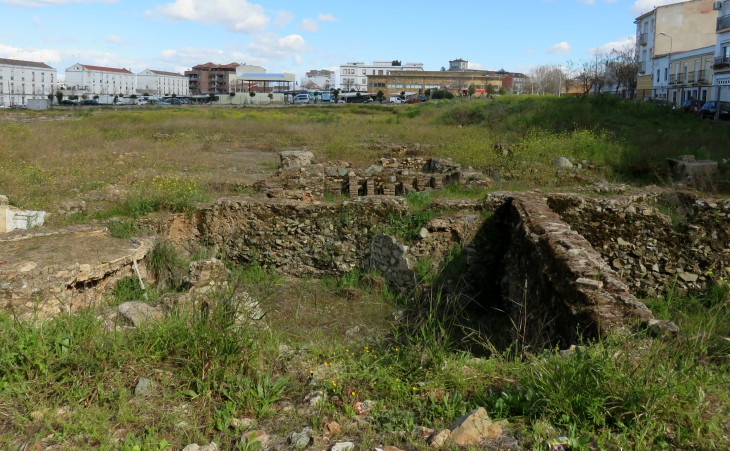 Move to Introduction and City Centre, Theatre, Amphitheatre and Circus, Other Roman Monuments and Exhibits from the Museums or Visigothic and Moorish Merida.