- Mycenae
(Bronze coins minted during the reign of Emperor Antoninus Pius and showing two Labours of Hercules:
The Apples of the Hesperides (left) and The Cattle of Geryion (right).
The coins were found at Alexandria, Egypt and are now at the Numismatic Museum of Athens)

If the development of the myth of Heracles/Hercules were to be represented with the graph of a function it would show an ever growing curve which starts in ca 1400 BC and reaches its apex in 287 AD when co-emperors Diocletian and Maximian defined their roles in the Tetrarchy system by assuming the titles of Iovius (the former) and Herculius (the latter); in this way Hercules, the hero known for his strength and who was not a member of the original Olympian pantheon was almost made equal to Jupiter, the Father of Gods and men.
The Twelve Labours of Hercules are a series of popular tales which shed light on the early development of civilization in continental Greece and its spreading to other Mediterranean countries. The first six labours take place in the Peloponnese, the next five occur outside Greece in locations which span from the Black Sea to Spain, the twelfth and last is set in the Underworld. Of the first six labours, three take place in Argolis, a region of northern Peloponnese which is named after the ancient town of Argos. 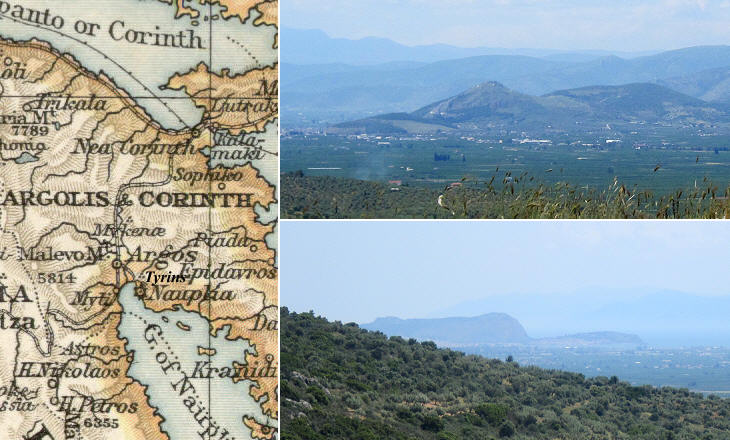 (left) 1900 Map of Argolis; (right) views from the acropolis of Mycenae: (above) towards the fortress of Argos; (below) towards Tiryns (barely visible) and Nauplia

The earliest developments of civilization in Greece occurred on Crete (Minoan civilization) and on the islands surrounding Delos (Cycladic civilization); they were followed by the Mycenaean civilization, which was not limited to Argolis, but which had three of its most important centres there: Argos, Mycenae and Tiryns.
The royal tombs unearthed at Mycenae in 1876 have provided archaeologists with many artefacts of exceptional interest which led to understanding the level of refinement attained by that civilization which lasted five centuries from 1600 to 1100 BC; its sudden decline is attributed to the invasion of Argolis by tribes coming from the north. 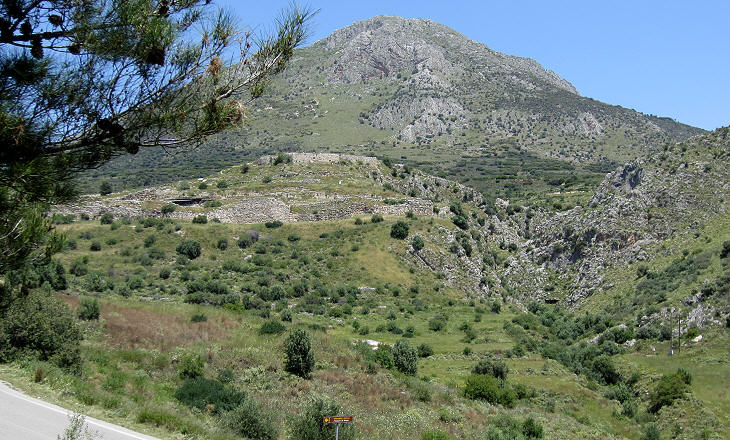 The hill chosen for the foundation of Mycenae was not particularly favourable in terms of defence; it had the advantage of having its eastern side protected by a deep ravine, but on the other sides the hill sloped gently downwards; in addition Mt. Euboea, a high mountain to the north of the hill, provided enemies with a good view of the layout of the town and of its fortifications. The choice of the site was therefore influenced by other factors such as probably its position at the centre of a large farmed area. 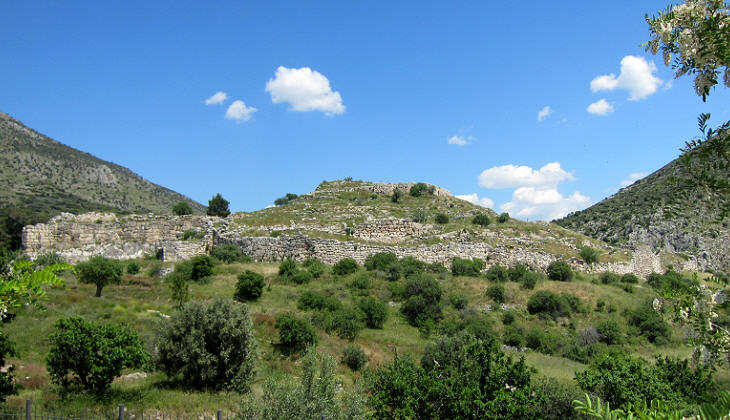 Overall view of the southern walls of Mycenae

The layout of Mycenae was roughly triangular with one side (the southern one) facing the plain and the other two the mountains; in ca 1350 BC the walls of the town were rebuilt and enlarged by using boulders which were roughly cut to obtain a smooth external surface; the walls were called cyclopean by Pliny on the assumption that only giants could have lifted their boulders; similar walls can be seen in several towns south of Rome such as Segni and Alatri, but they were built one thousand years later. 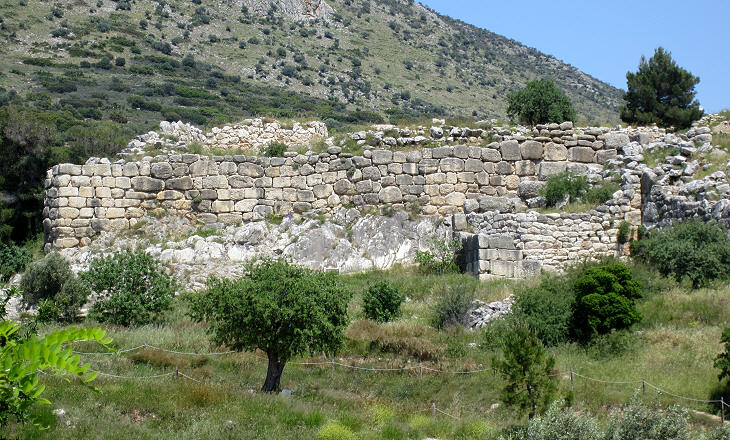 Bastion protecting the main gate, which is located at its right end

The most impressive section of the walls is located near the main gate; it is a long bastion the height of which is enhanced by that of the underlying rock; the right side of the image shows the remains of a square tower which stood opposite the bastion and which completed the protection of the gate. 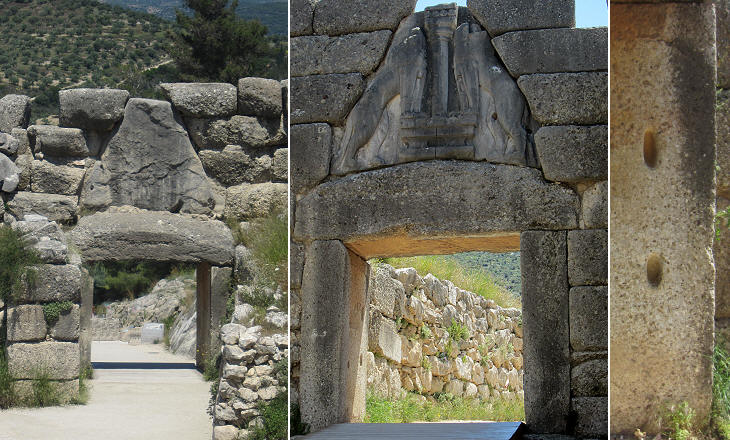 Lion Gate: (left) the lintel and the boulder above it seen from the interior; (centre) view from the outside; (right) holes which housed the hinges of the door

The engineers who designed the walls of Mycenae were satisfied that the bastion and the tower granted adequate protection to the main gate of the town which therefore was built giving more attention to political and celebratory aspects; this gate was much larger than required by practical needs and its access to the town was not protected by a second gate placed at an angle shortly after the main one, as at Tiryns. 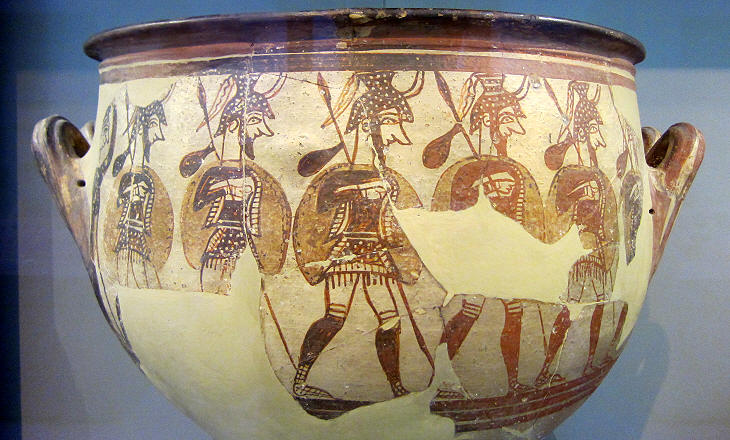 The rationale behind the decision of the Mycenaean engineers lay in their opinion that the long bastion gave un unbeatable advantage to the defenders; however the protection given by the bastion would have been more effective had the bastion been on the other side of the gate; this because ancient warriors were trained to hold the shield with their left arm and they were therefore at a loss when they had to protect themselves from arrows, javelins and stones which were thrown at them from the right. 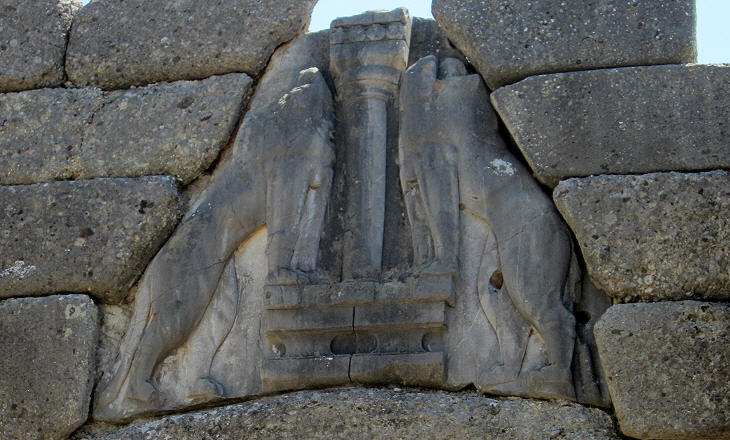 In the early XIXth century western travellers who visited Mycenae thought the Lion Gate was the entrance to a medieval castle and its relief depicted the heraldic symbols of a French knight. The relief shows two rampant lions confronting each other across an altar supporting a column; its origin was extensively debated by archaeologists; today it is attributed to the influence of similar images found on Cretan stone seals and ivory artefacts; it is possible that a precious stone decorated with two confronting lions ended up at Mycenae (for a different use of lions as protectors of gates see the Lion Gate of Hattusa which is almost of the same period).
The heads of the lions were made up of another material, probably painted ceramics; the holes where the heads were hooked on are still visible; they hint at projecting and perhaps even movable heads. 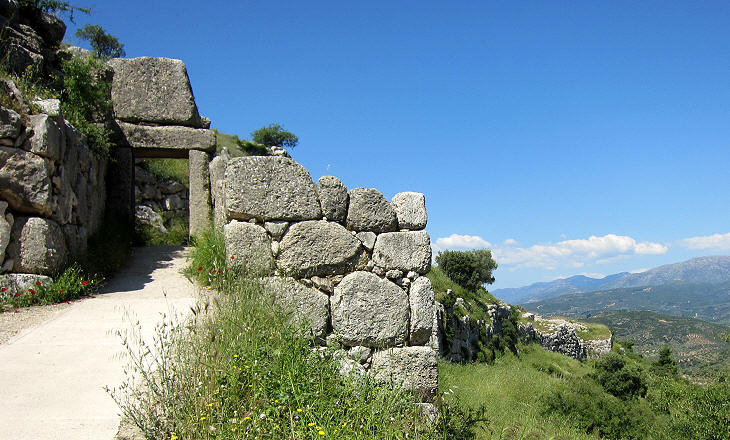 Mycenae had a second gate facing the mountains; this gate did not have the same celebratory and political purpose as the Lion Gate and it was protected by a long wall on its right side; it can therefore be regarded as a "Left Gate" similar to the Scaean Gate of Troy mentioned by Homer and to gates at Ferentino in Italy.
Overall the rulers of Mycenae were much less worried about the defence of their town than those of Tiryns, perhaps because the latter was located very near the coast and was therefore subject to more attacks. 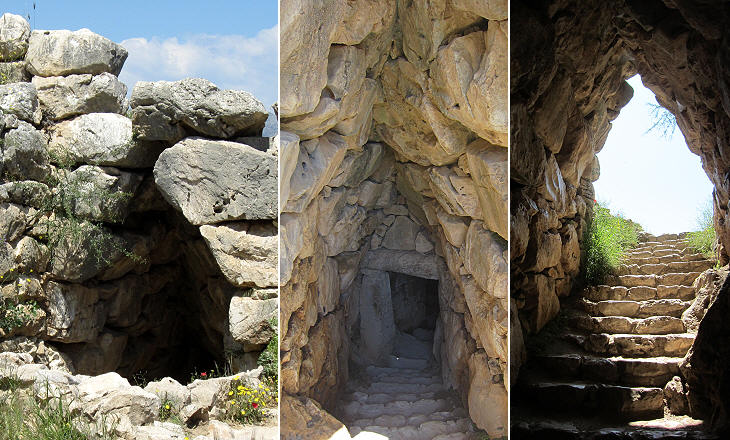 The engineers of Mycenae were very skilled in corbelling techniques and they were able to build long vaulted passages and veritable domes (see page two) which have not collapsed and this is particularly remarkable when considering that Greece is a country subject to severe earthquakes. Going down the long tunnel which led to an underground source is an exciting experience, whereas returning to the surface evokes a sense of relief, because although one is aware the construction is sound, corbelled passages convey the feeling that their stones are just about to fall. 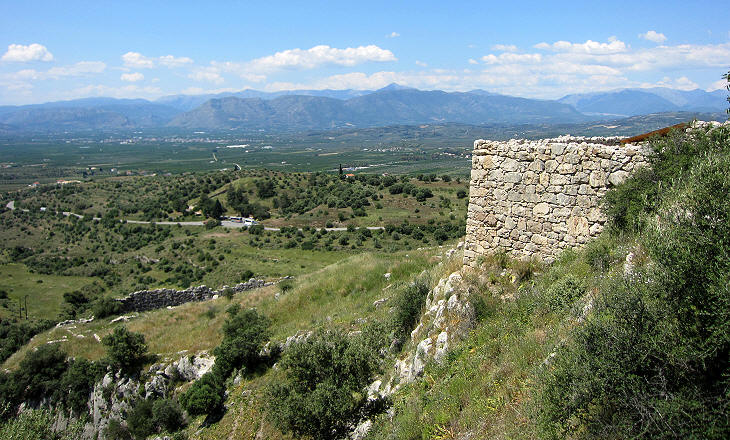 Bastion of the acropolis

The Minoan and Cycladic civilizations were greatly influenced by having developed on islands and trade played a major role in their economies; the Mycenaean one instead was based on farming and stock breeding. These activities could be performed only in some areas of the region, broadly speaking on the hills; the mountains were covered with thick forests which housed wild animals such as lions and boars, while most of the plain of Argolis was marshy and unhealthy.
The three labours of Hercules which take place in Argolis hint at the risks posed by a still hostile nature; in the First Labour Hercules killed the Nemean Lion, an enormous beast which lived in a cave near Nemea, a town between Mycenae and Corinth and which was the terror of shepherds. Hercules found the lion on Mount Tretus and, after his arrows, sword and club had failed to harm the beast, he engaged in a wrestling combat and managed to strangle it to death. He then flayed the carcass and after that he wore its pelt as armour with the head acting as a helmet. In the other labours the scene moved from the mountains to the swamps of Lerna near the sea, where the Hydra, a monster with nine snaky heads terrorized the farmers (Second Labour) and to the Stymphalian lake at the border with Arcadia from where monstrous birds took to the air to kill men and domestic animals by discharging bronze feathers (Sixth Labour). 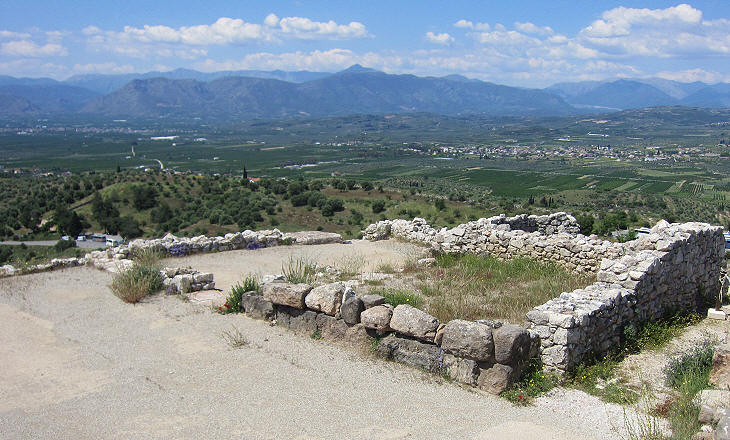 Acropolis and in the background the mountains of Arcadia

Town is perhaps not the most appropriate term to define Mycenae which was more similar to some large English castles which housed the baronial residence, a series of facilities and workshops associated with farming and breeding including administrative offices and the lodgings for artisans, clerks and servants.
The acropolis of Mycenae housed the royal palace which consisted of a series of courtyards surrounded by rooms and halls; archaeologists have identified a major courtyard giving access to the megaron, a large hall, and to the throne room; the layout of the palace, with the help of a detailed map, is still clearly identifiable. 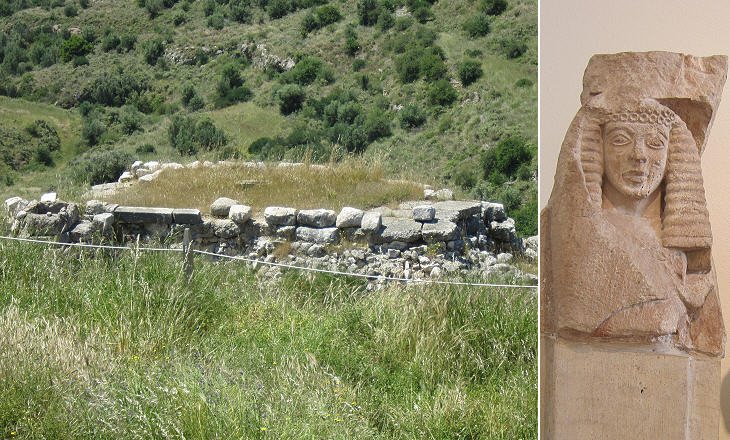 (left) Temple to Athena; (right) fragment of a metope of the temple showing a woman who draws her cloak over her head (Museum of Mycenae)

Exactly when and why Mycenae suddenly declined is still a matter for debate; archaeologists have found evidence of a great fire, which was probably set by enemies who conquered the town in ca 1100 BC. The site was abandoned for maybe six centuries until a small temple to Athena was built on the acropolis, but similar to Tiryns and unlike Argos, Mycenae did not enjoy a second life and it was abandoned again.

The image in the background of this page shows a chariot painted on a vase found at Mycenae, now at the National Archaeological Museum of Athens.

Move to: page two: The Royal Tombs
Other pages of this section: Tiryns; Ancient Argos