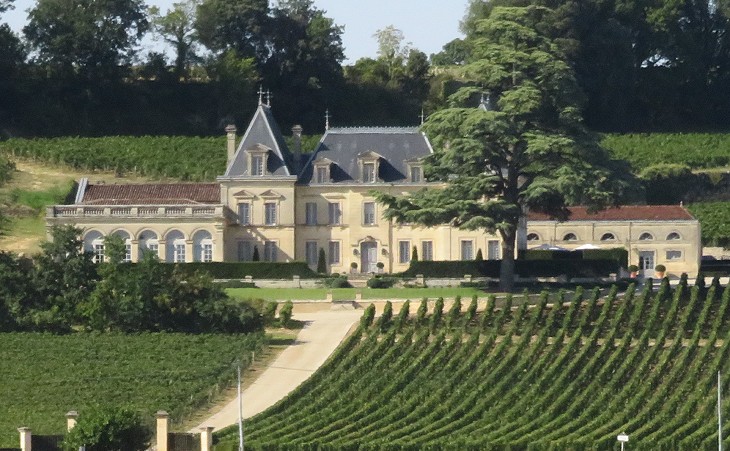 Château Fonplégade at Saint-Emilion near Bordeaux

The landscape of the Jurisdiction of Saint Emilion is a monoculture, comprised exclusively of vines that were introduced intact and have remained active until today. Viticulture was introduced into this fertile region of Aquitaine by the Romans and intensified in the Middle Ages. The Saint Emilion territory benefited from its location on the Pilgrimage Route to Santiago de Compostela, and several churches, monasteries and hospices were built as of the 11th century. (..) There are considerable traces of Roman occupation, especially rich villas, and it was here that the Latin poet Ausonius retired when he withdrew from public affairs in the 4th century.
From the synthesis of the Outstanding Universal Value and other assessments which led UNESCO to include the district of Saint-Emilion in the World Heritage List in 1999. 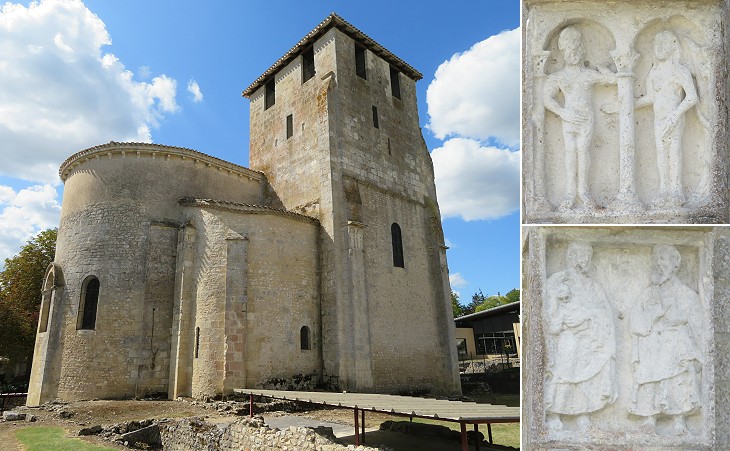 (left) Saint-Pierre-ès-Liens, a Romanesque church on the site of a Roman villa at Montcaret, 20 km east of Saint-Emilion; (right) reliefs portraying Adam and Eve and Saint Peter and Saint Paul

Ausonius indicated in his writings that he owned at least four countryside estates, one of which was most likely in the proximity of Saint-Emilion and another one near Saintes. The remains of a Roman villa which were unearthed in the 1920s at Montcaret provide a good basis for imagining the design and decoration of those of Ausonius.
In the XIth century Benedictine monks from the important abbey of Saint-Florent de Saumur in Anjou founded a priory on the site of the Roman villa. It was greatly damaged during the XVIth century wars of religion and only the church survived, although in an abandoned state. It was reconsecrated in 1858 and in 1947 the building was carefully restored. Houses in the village

A small village developed around the church; its houses were built in part with stones from the Roman villa and its farming facilities. In 1827 fragments of floor mosaics were found during excavations for a public laundry and in 1873 a tomb was discovered when building a railway station. Children and farmers often found small ancient objects or fragments of mosaics on an area much larger than that which is currently open to the public. 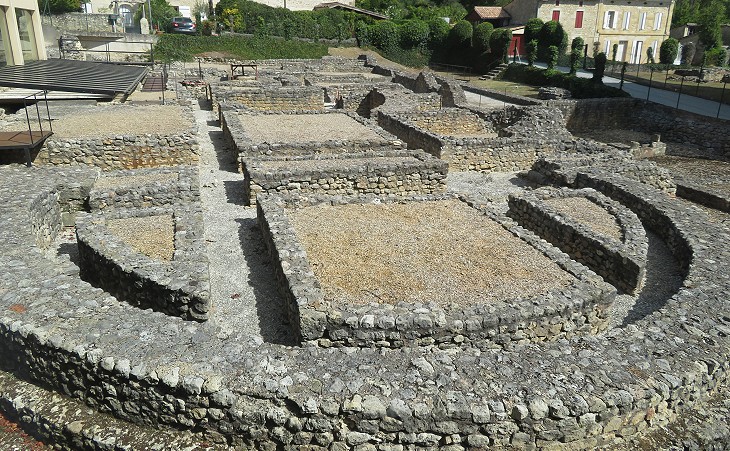 The "oecus", the principal hall of the villa

In 1921 the first structured archaeological excavations identified the residential part of the villa, which had been partly turned into a small graveyard. It stands on slightly sloping ground and it includes some halls for entertaining and parts of private baths. The villa reached its maximum development in the IVth/Vth centuries, approximately at Ausonius' time. 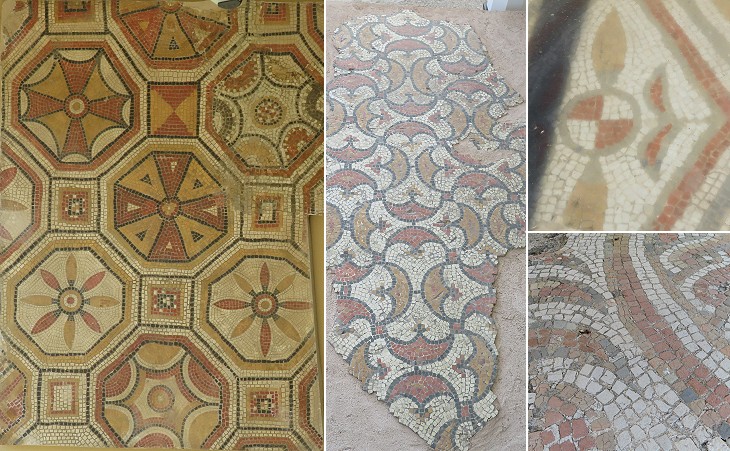 Floor mosaics which decorated the "oecus" and adjoining facilities

The fact that archaeological campaigns at the villa began in the the 1920s had a very positive effect on the preservation of its structures and floor mosaics. Other villas which were identified in the XVIIIth and XIXth centuries were excavated with the sole purpose of finding statues and reliefs in addition to jewels and coins. A villa at Chiragan near Toulouse was excavated in 1826 and the impressive and fine statues and reliefs which were found there occupy an entire floor of Musée Saint-Raymond, but its architectural evidence and mosaics were not protected and are lost. 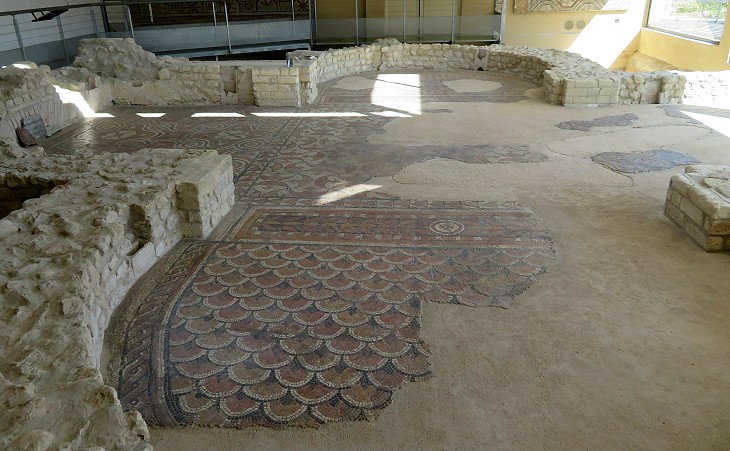 Cruciform Hall inside a modern shelter

From the oecus the landlord and his guests could directly access another hall which most likely was the triclinium, the dining room. Its layout is rather peculiar because similar halls usually had an apse on the short side of a rectangular space (as at Vienne and in Germany and Britain). The apse was reserved to the couches of the most important personages. At Montcaret the hall has four arms, two of which ending with an apse; it is a layout which does not appear very suited for a banqueting room, because it did not permit a view of all those who attended the event. 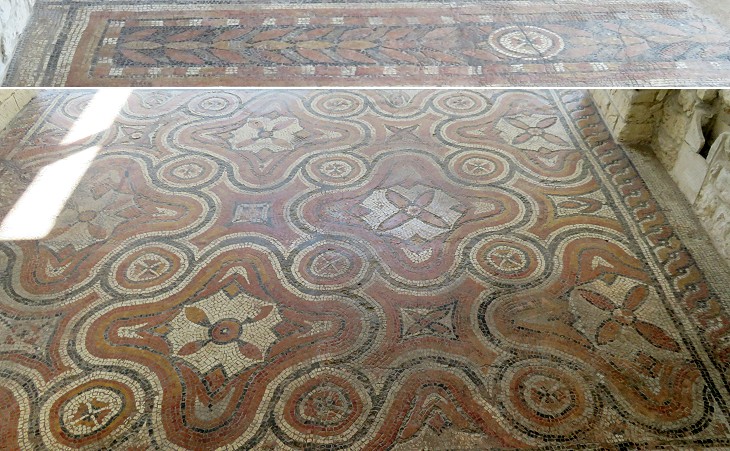 The floor mosaics of the public part of the house are characterized by the use of yellow and red pieces, similar to what can be seen in many other parts of the Roman Empire, e.g. at Villa La Olmeda in Spain and at St. Albans. The feature which strikes the viewer is the absence of emblemata, small sections portraying human beings or animals; these very often had references to the pagan myth (see some emblemata at Villa Adriana); maybe the landlords who lived there in the late IVth century feared that some of their guests could criticize them because they disregarded the efforts by Emperor Theodosius and his successors to stamp out all references to the traditional cults. 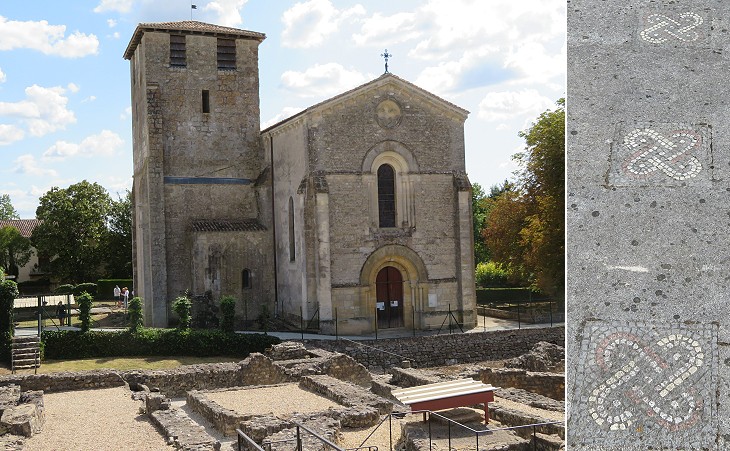 (left) Site of the garden which is now occupied by the church; (right) detail of a floor mosaic of a portico which surrounded it

The public section of the villa was separated from the private baths by a garden surrounded by porticoes; the fragments of their floor mosaics are different from those of the halls and show traditional decorative patterns, i.e. Solomon's knots, which suggests that they were made at an earlier period. 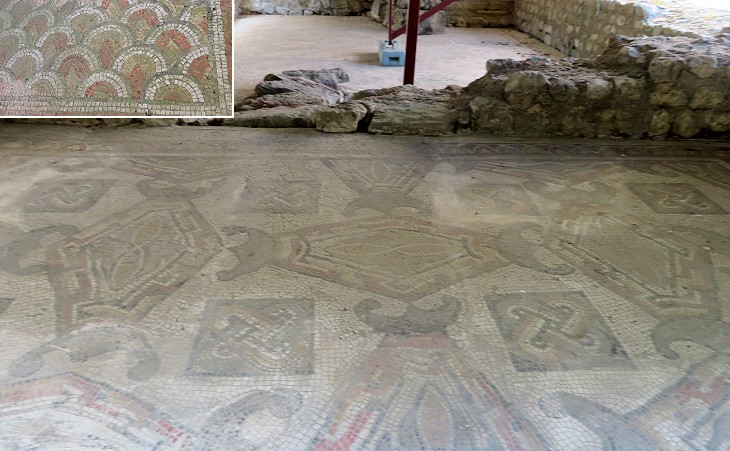 Entrance to the bath halls; (inset) floor mosaic of the adjoining room with a fish scale pattern which can be seen also in the Cruciform Hall

Some of the bath halls and in particular the calidarium (hot room) and the tepidarium (tepid room) lie beneath the church. They were accessed through an entrance which was decorated with a floor mosaic depicting highly unusual lozenges ending with peltas and Solomon's knots. "Natatio" (low pool) of the "frigidarium" (cold room); the image used as background for this page shows a detail of its floor mosaic

This pool was decorated with the only figurative mosaics of the villa. Sea creatures were depicted in sixteen square sections; it was a very popular subject for the decoration of baths and fountains throughout the whole Roman Empire; you may wish to see a fine example of mosaic in Tunisia and of frescoes at Vesunna (Périgueux), not far from Montcaret.