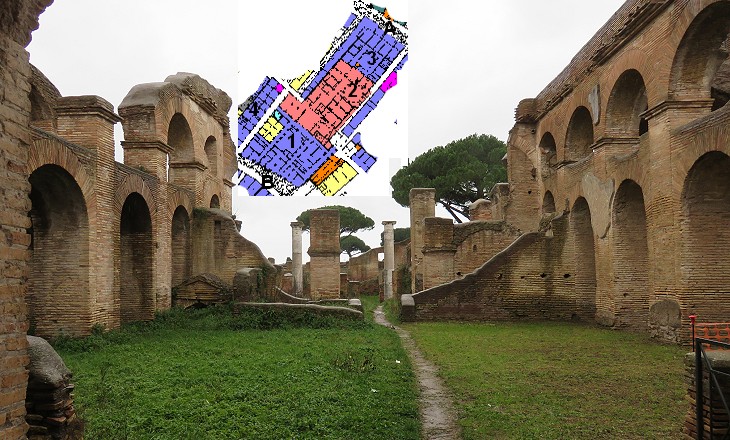 An insula (block) stretching from Via della Foce to Cardo degli Aurighi makes up one of the most interesting examples of multi-purpose buildings found in a Roman town. It was erected during the reigns of Emperors Hadrian and Antoninus Pius, when the urban layout of Ostia was redesigned to reflect the move of many activities to the new harbour of Portus. 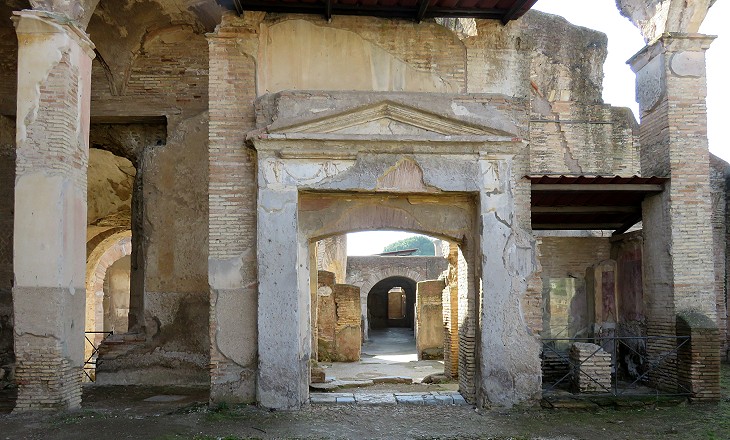 The first section of the insula to be completed was that on Via della Foce. It was a large building with shops in the ground floor and apartments in the upper stories. In the courtyard a small hall housed a statue of Serapis, a deity with features of Greek Zeus and Egyptian Osiris. The cult of Serapis was introduced in Egypt by the Ptolemaic Pharaohs in the IIIrd century BC as a belief which could be accepted by both the Egyptians and the Greeks. The worship of Serapis was revived by Emperor Hadrian who dedicated a temple to the god at his villa near Tivoli and a gigantic one at Pergamum. A temple to Serapis was inaugurated in this neighbourhood at approximately the same time. 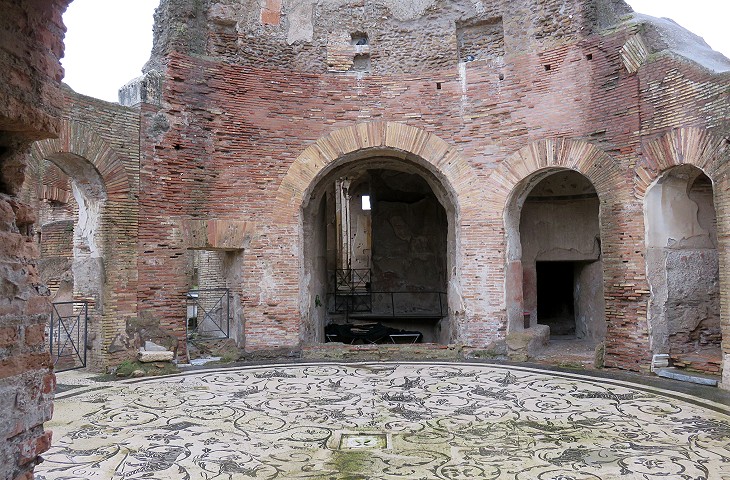 The construction of the second section of the insula made use of some existing buildings having a commercial purpose. A round hall which perhaps had been a macellum (marketplace) was turned into the frigidarium of Terme dei Sette Sapienti, a bath complex. It could not be directly accessed from the street, but only through the two other sections of the insula. The frigidarium, which has a diameter of 12 mt/40 ft, was covered by a dome. 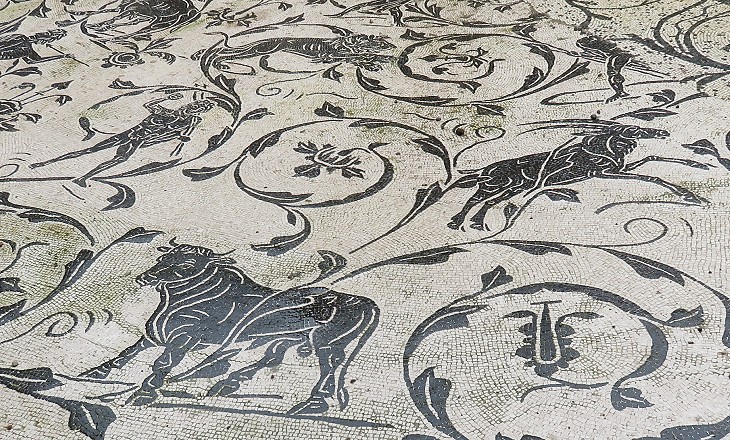 Very often floor mosaics of baths at Ostia and elsewhere depicted marine scenes with a predilection for sea-monsters as at Terme di Nettuno. The floor mosaic of this frigidarium was mainly based on an elaborate acanthus scroll which surrounded hunters and their game, but without showing the actual killing of the animals (as usually occurred in later mosaics e.g. at Kos). It brings to mind a mosaic which decorated Nero'villa at Anzio. 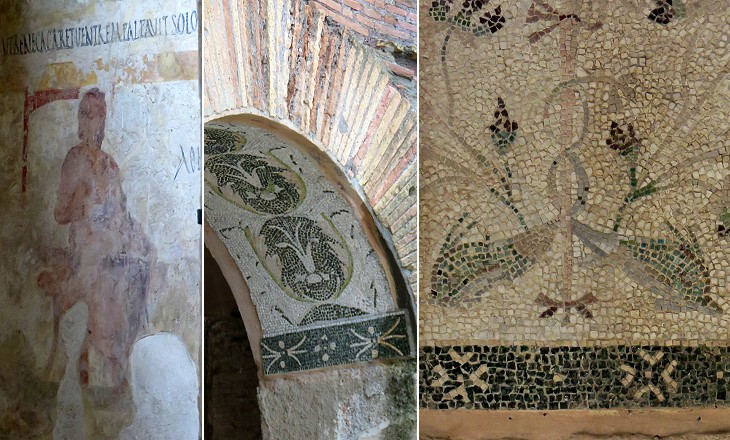 The baths are named after frescoes in a small room adjoining the frigidarium, which depict the Seven Sages (Greek philosophers of the VIth century BC) next to sentences which sound as if they were pieces of advice. The topics they cover however are not those which one would associate with a Greek philosopher. One sentence says VT BENE CACARET VENTREM PALPAVIT SOLON (Solon rubbed his belly in order to smoothly defecate). Another sentence says VISSIRE TACITE CHILON DOCVIT SVBDOLVS (Cunning Chilon taught how to discharge flatulency unnoticed). So the customers of these baths enjoyed a good albeit gross laugh in this room which perhaps was a bar. Other elaborate details of the decoration suggest that the baths were meant for a wealthy clientele or perhaps for just the residents of the insula. You may wish to see some floor mosaics in which more respect was paid to philosophers, e.g. at Autun and Baalbek. 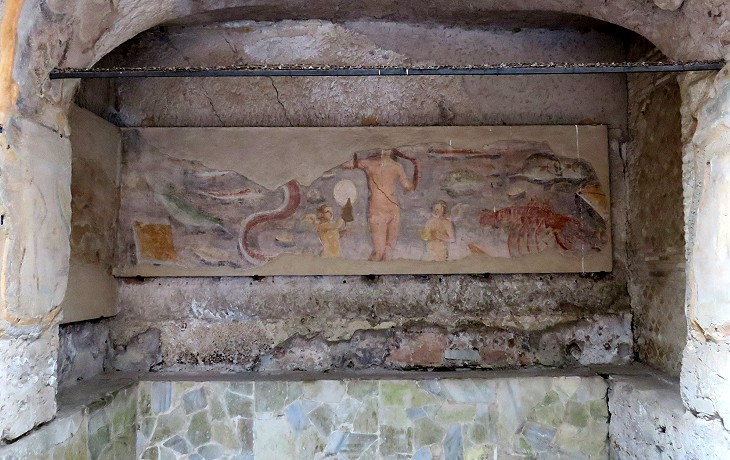 The baths continued to be used in the IIIrd century when a small frigidarium was decorated with a fresco (similar to what occurred at the frigidarium of Terme del Faro). The woman portrayed among sea-creatures is Venus and not Amphitrite, the wife of Poseidon, or Thetis, the leader of the sea nymphs, because Venus (after she emerged from the sea) is depicted in the act of wringing out her hair. This goddess took very good care of her hair as you can see in a mosaic found on Cyprus, her birthplace and in another one at Philippopolis. 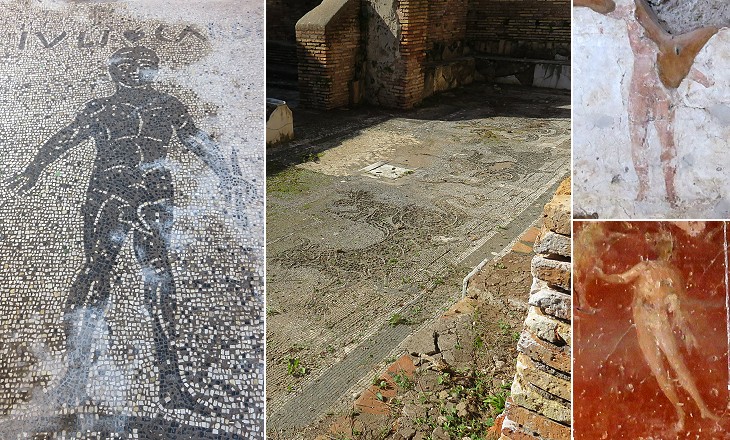 Another bath establishment of Ostia has been named after its superintendent who was depicted in a floor mosaic, similar to Iulius Cardus, who worked at these baths. The purpose of some small rooms decorated with frescoes has not yet been fully understood as they are not part of the basic layout of the baths. 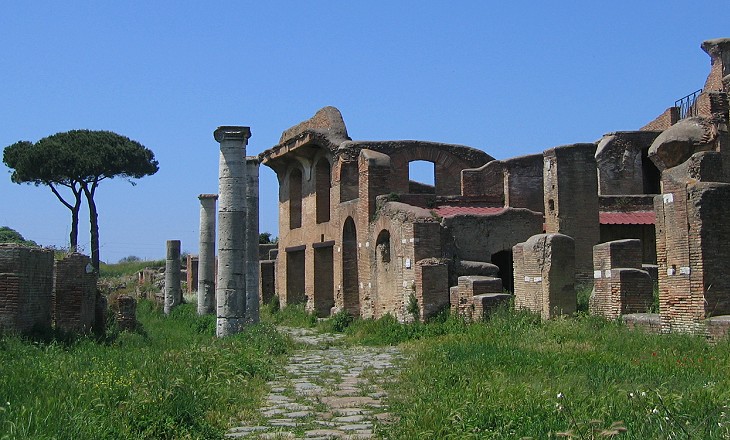 The third section of the insula was the last to be completed and it mainly had a housing destination, because apartments were identified on the ground floor in addition to those of the (two or three) upper storeys. The complex had an imposing façade on Cardo degli Aurighi which has become a landmark of the archaeological area. The travertine columns which stand opposite the façade were most likely part of the decoration of an adjoining large residential quarter.

The building has been named after two small frescoes depicting charioteers on the wall of a corridor near the main courtyard. They hold wreaths and a palm-branch, a symbol of victory which eventually will become a symbol of sainthood/martyrdom. They drive bigae, two-horse chariots which were used for races. You may wish to see some mosaics depicting horses and charioteers and races. The Romans did not use chariots at war, they instead prevented their enemies from using them by throwing caltrops on the battlefield (i.e. metal devices having four spikes one of which was always upright). 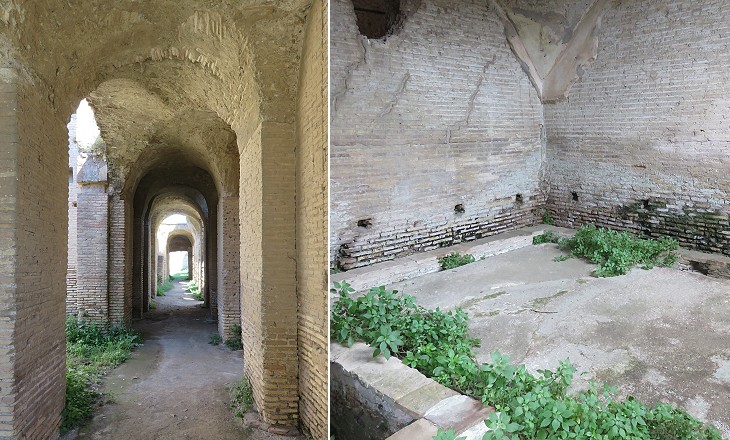 The layout of the building is rather complex because it has a number of long corridors. A large latrine most likely served the customers of an inn which archaeologists say was inserted in some of the apartments. 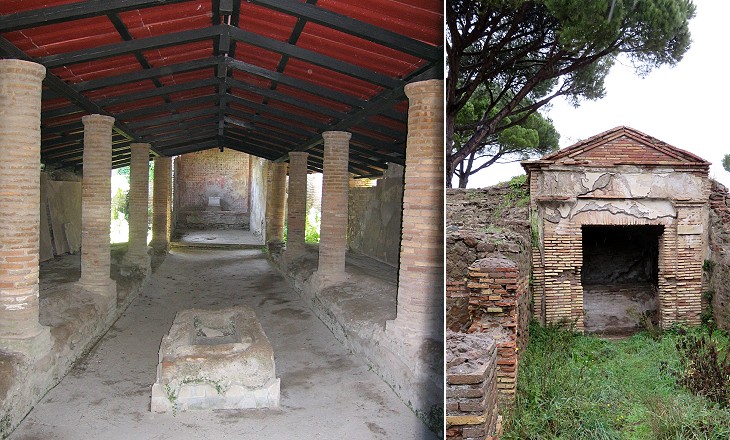 Two shrines have been identified. One of them is rather long, but it is not a mithraeum, because it was not decorated with the symbols of that cult, which have been found in all mithraea. Some elements of the fresco decoration suggest that Dionysus/Bacchus, god of wine, was worshipped there. A very small shrine stands opposite Sacello delle Tre Navate and it might have been dedicated to Dionysus/Bacchus as well. The two shrines adjoin Caseggiato degli Aurighi, but they could be accessed independently. 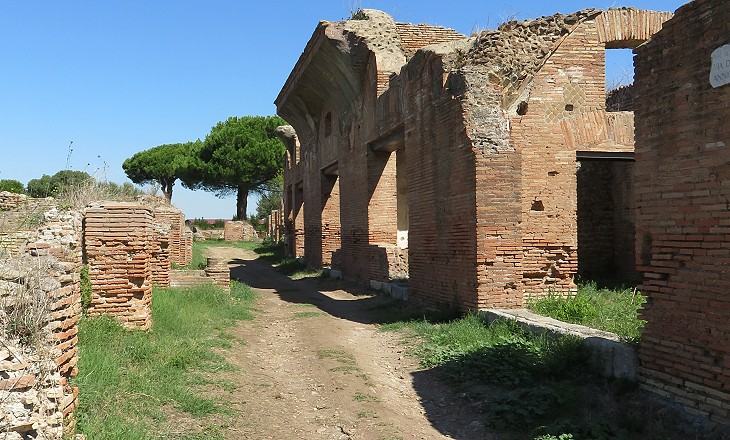 This long building near Caseggiato degli Aurighi had housing and commercial purposes. It had two shops on Cardo degli Aurighi and possibly other shops or workshops on a side street. Near the building archaeologists have found evidence of a warehouse for olive oil similar to Caseggiato dei Doli which could be related to a factory of oil lamps inside Caseggiato di Annio. 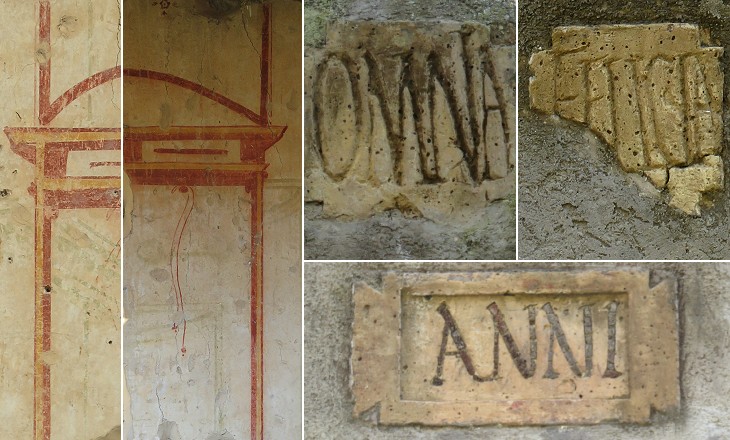 The business (or the private life) of Annius, an owner of the building, was going so well, that he decided to write Omnia Felici Anni (All is great for Annius) on three clay tablets he placed on the corbels supporting the balcony. Some rooms of the building were decorated with frescoes depicting architectural frames. The image used as background for this page shows a similar fresco at Caseggiato degli Aurighi.