- Olevano, Bellegra and Rocca S. Stefano
(detail of a fresco at S. Onofrio) 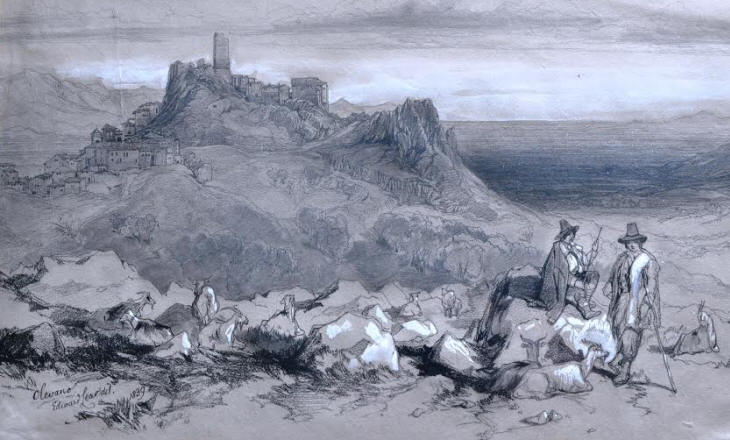 1839 View of Olevano by Edward Lear (courtesy of Rosamie Moore). This image was not used in Lear's "Views in Rome and its Environs"

My hostess at Genazzano owned a vineyard on the mountain above Olevano, three miles from Genazzano. There a lonely house, occupied by her vine-dresser, stands on the hillside, its wide verandah decked with flowers and shaded by fig and chestnut trees, with nothing to interrupt the view from it of the majestic chain of the Serra and the wide plain of the Sacco, and there in 1856 I spent many long days in the pure aromatic mountain air, living only on fruits, my only hesitation being which to break from the parent tree first, for the variety was great, and all were alike excellent and plentiful.
Gregorovius - Aus der Campagna von Rom (About the Roman Campagna) translation by Dorothea Roberts
Olevano had a very picturesque aspect, which had already attracted the attention of many foreign painters. 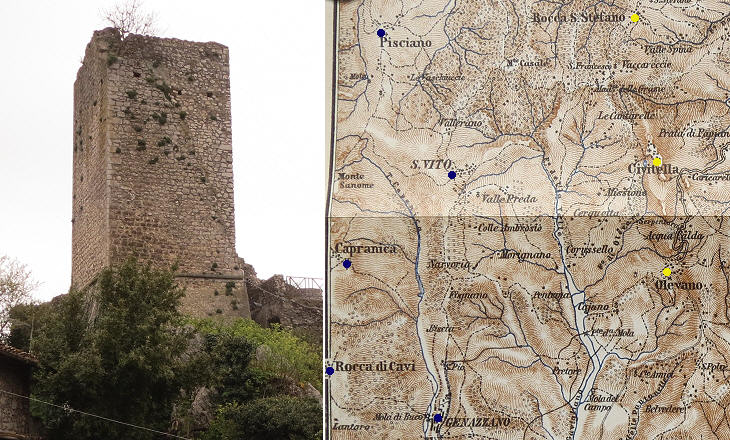 The 1883 Baedeker Guide to Central Italy suggested its readers travel from Olevano to Subiaco by Civitella and Rocca S. Stefano on the back of a donkey and descibed the route as being most picturesque, in particular for the views from Civitella, which is situated on an isolated mountain at 815m/2,674ft.
Olevano was a historical fiefdom of the Colonna, similar to Genazzano and Rocca di Cave, whereas the other two towns belonged to the Benedictine Abbey of Subiaco (until the end of the Papal State in 1870) and Civitella was aka Civitella di Subiaco. 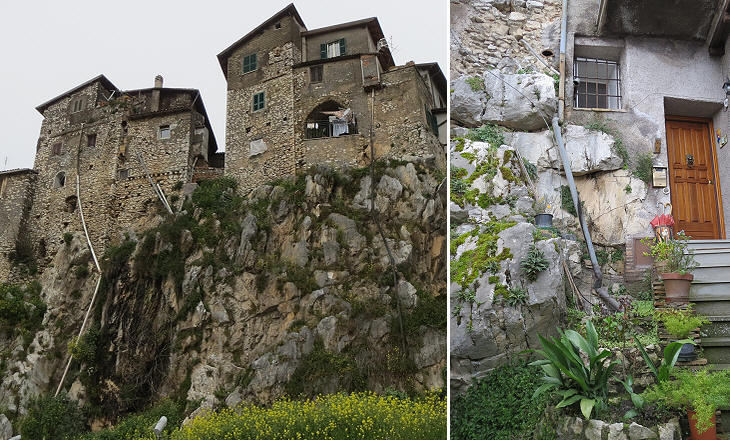 Olevano, August 16, 1857. On July 3, took up my abode here with Donna Regina, with whom I still remain the first three weeks lazy and spiritless. Have been reading a good deal of Spanish, Greek, etc. The misery in this ruinous spot is unbounded. The vineyards around S. Lorenzo have been devastated by hail- storms, and a poor woman was drowned in the torrent. The storm broke with tropical violence in the afternoon. (..) On the whole it has been the worst kind of quiet life; nothing has happened around or within me.
Ferdinand Gregorovius - Roman Journals - translation by G. W. Hamilton 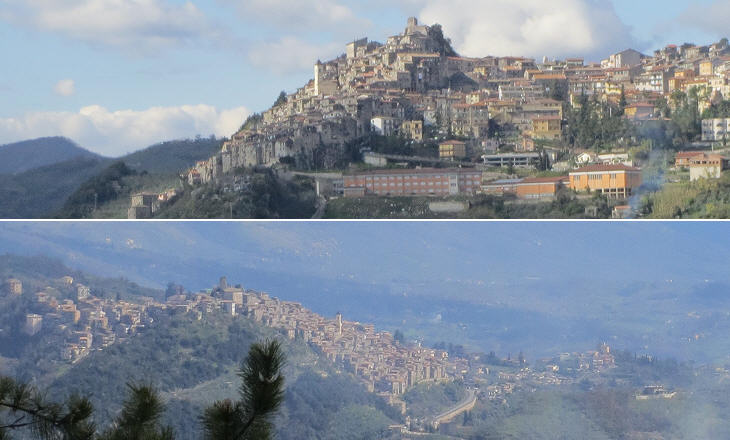 Views of Olevano (that below from S. Vito)

Genazzano August 25. I now discover that the rarefied air of Olevano, which stands very high, was bad for me, for scarcely had I returned to Genazzano, on August 17, when my mood changed for the better. The elements here are more in harmony with my temperament. Gregorovius 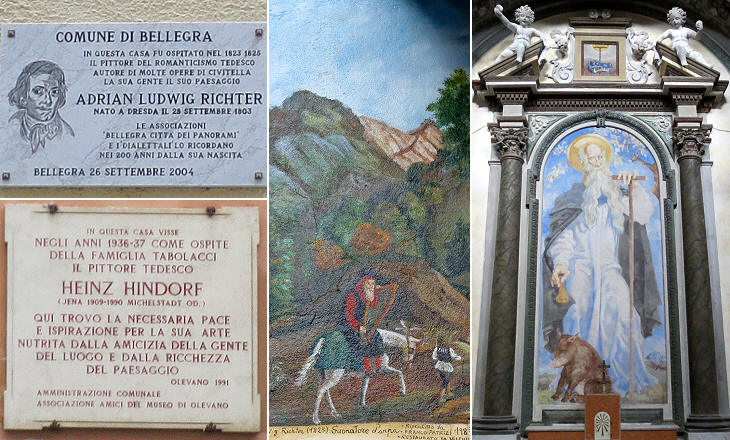 (left) Plates on the houses where foreign painters lived; (centre) copy of "The Harpist Returns Home", a painting by A. L. Richter on a wall at Bellegra; (right) St. Anthony the Abbot by Jonas Hajnal, a Hungarian painter (1913-2010) at S. Nicola in Bellegra

The artists flock forth at Olevano where they make their summer societies, leading an innocent, merry life enough, and, while rivals in their art, filled with simple kindnesses for one another. (..) And this is the famous inn of Olevano, the Albergo degli Artisti (aka Casa Baldi). It is a perfect artist's paradise. Its rooms are homely, but are cleanliness itself. (..) The pleasant honest mistress, Pepina Baldi, with her husband Nino, are really charming specimens of respectable well-to-do Italians of the lower orders, full of simple kindnesses and courtesies, and frankness and openness itself. Their handsome boys and girls have served as voluntary models to half the artists in Rome when they have been staying here.
Augustus J. C. Hare - Days Near Rome - 1875.
Today Casa Baldi is a summer residence for young German artists of Accademia di Villa Massimo. Other foreign painters chose Anticoli and Rocca di Papa for their summer holidays. 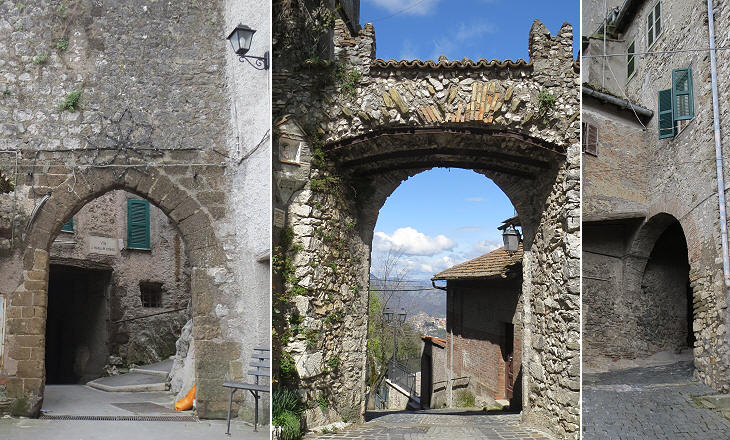 Natural defences were complemented by fortifications which are still rather evident at Olevano, less so at Bellegra and Rocca S. Stefano, although names of streets make references to towers and castles. At Bellegra and Olevano there is some evidence of ancient walls such as those at Alatri or Segni.
In 1880 Civitella changed its name to Bellegra on the assumption that it originated from a pre-Roman town by that name. Other sources say it stands on the site of Vitellia, a Roman town. 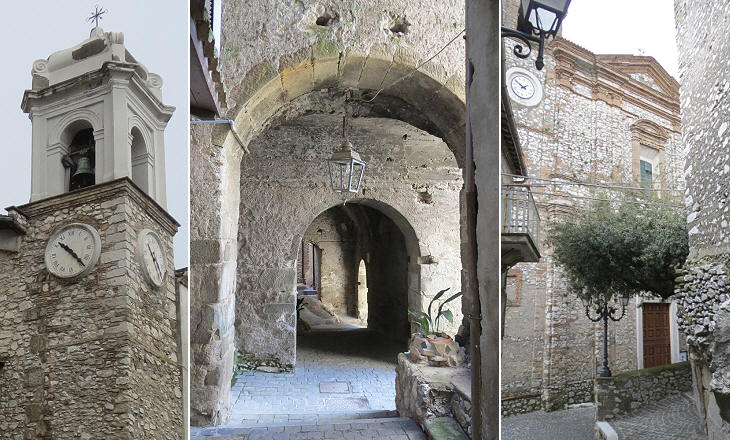 The stone it is built of is so like the rock that it looks as if it had grown out of it.
Lady Maria Callcott - Three Months Passed in the Mountains East of Rome: During the Year 1819.
The sentence refers to Poli, but it applies to the small towns covered in this page as well. They were all built on the edges of cliffs and ravines.
The interior of the town (Olevano), with its narrow and dirty streets, presents no attraction. The 1883 Baedeker confirmed Gregorovius' opinion about the extreme poverty of these towns, which is evident in the modesty of their churches. 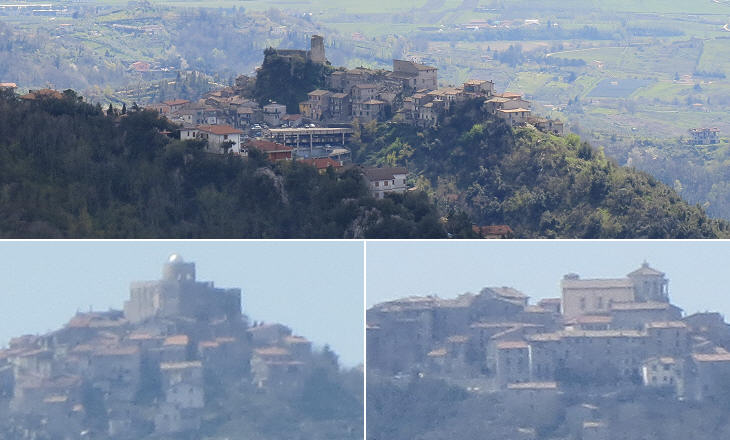 The 1883 Baedeker had a long list of Italian and foreign painters who had their studios in Rome. For many of them the guidebook indicated that they specialized in landscapes, a branch of painting which does not attract many contemporary artists, so that today Olevano and the nearby towns are no longer a fabled artists' haven.
The image used as background for this page is based on a view of Olevano in 1820 by an anonymous German painter.
Today Bellegra prides itself on being Città dei Panorami and it actually offers great views in all directions. Other views from Bellegra: (above) S. Vito; (below) Ciciliano 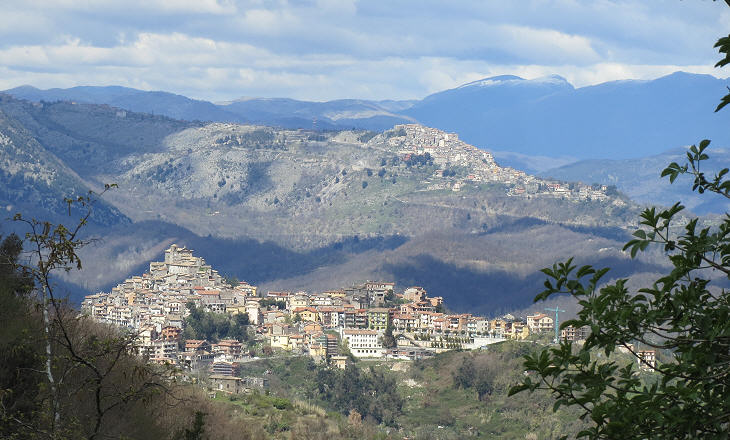 View northwards with Rocca S. Stefano in the foreground and Rocca Canterano (on the road to Subiaco) in the background 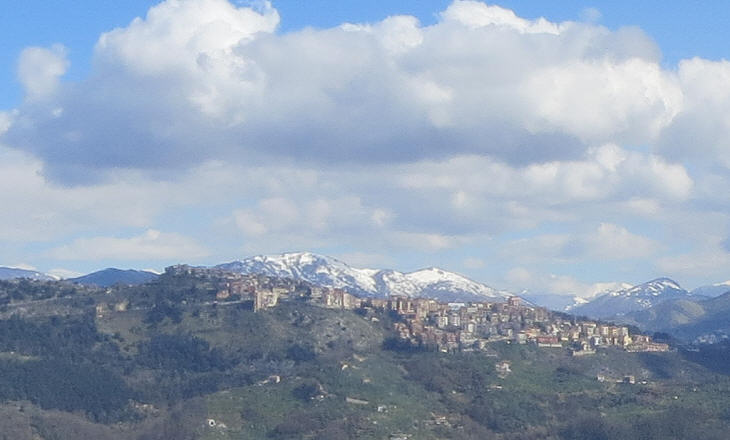