Porta Laurentina, the southern gate, and beyond it Cardo Maximus, the main north-south street of Ostia

Pirates raided Ostia in 67 BC and in the following years new walls were built to better protect the town, most likely at the initiative of Marcus Tullius Cicero who was consul in 63 BC.
Unlike Porta Romana, the main gate of Ostia, Porta Laurentina was not embellished with a triumphal arch.
In 198 AD Emperor Septimius Severus opened Via Severiana, a road which from this gate led to Laurentum, a lost town not far from Lavinium, and beyond it to Antium (Anzio) and Terracina. You may wish to see Villa di Plinio, a Roman villa along Via Severiana, at the end of this page. 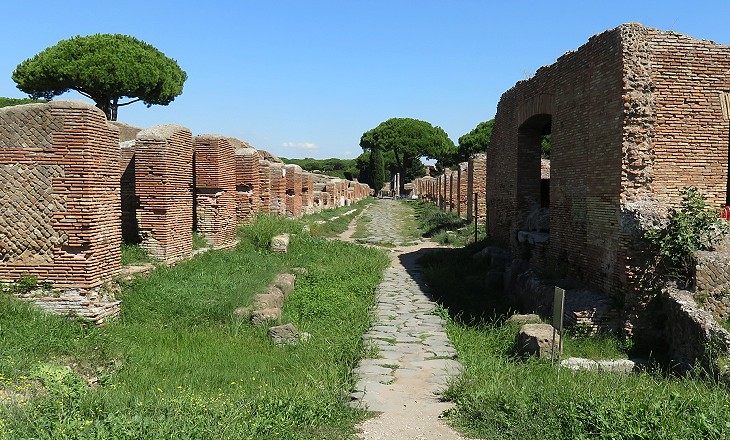 The site of Porta Marina (marked by some stone blocks) and beyond it Decumanus Maximus, the main east-west street of Ostia. In the early IIIrd century AD the first building to the right housed a "caupona" (tavern)

Porta Marina, the western gate, was built at the same time as Porta Laurentina, but in the Ist century AD it was pulled down to enlarge the access to the town from a new neighbourhood which had developed on the seafront. Its remains were found beneath the western end of Decumanus Maximus. Because Roman laws listed a number of activities which could not be performed in town (e.g. carrying weapons or building tombs) the official limit of Ostia was made evident by a (lost) arch near the former gate.
The fact that new walls were not built when this was done in Rome in 275 AD indicates that Ostia had already lost much of its importance. 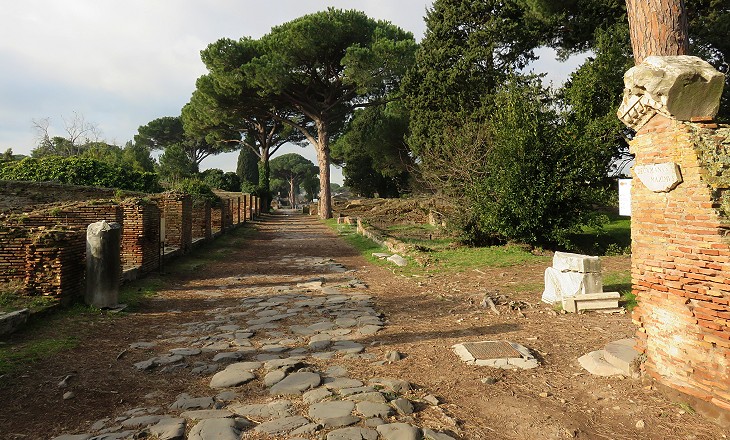 Decumanus Maximus: view towards Porta Romana with remains of shops on the left/northern side

Decumanus Maximus began at Porta Romana and it was the continuation of Via Ostiense, the road which linked Rome with Ostia. In its initial section it was flanked by shops, where travellers could make their first or last purchases. Although the main harbour was situated at Portus, many travellers stayed at Ostia prior to embarkation (as St. Augustine did in 387 on his way to Carthage). The many shops identified by archaeologists at Ostia performed the same function as a duty-free outlet at an airport. 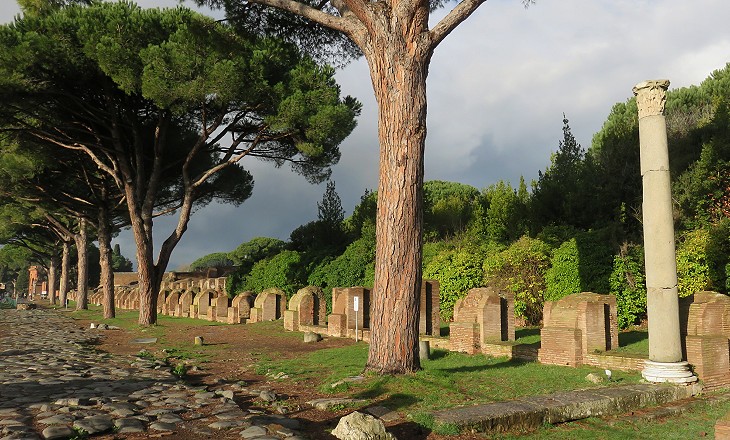 With the enhancement of the harbour facilities at Portus by Emperor Trajan, some activities were moved to that location and Emperor Hadrian promoted a redesign of Ostia which had a lasting effect. A long portico with shops having an identical size was built along the northern side of Decumanus Maximus. It had a large sloping roof in order to fully protect passers-by from rain on windy days and to provide them with shade in the hot season. 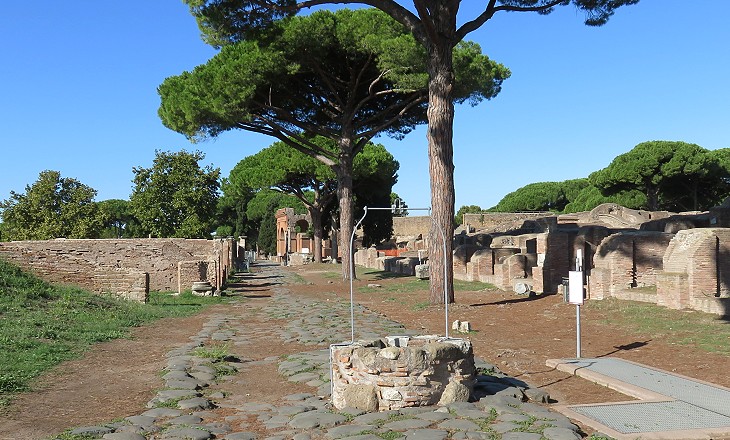 We ought to have found Ostia a city of bare walls, stripped of every movable fixture, not to speak of works of art and objects of value. Nothing of the kind has happened. Some of its houses and public buildings look as if they had been deserted by their inhabitants and custodians only yesterday, and their works of art left intact.
Rodolfo Lanciani - Wanderings in the Roman Campagna - 1909
Ostia resembles Pompeii in the sense that its buildings are frozen in time without later additions and modifications. Archaeologists have found extremely limited evidence of changes to the town after the Vth century. A miserably built well of the VIth century was found right in the middle of Decumanus Maximus, few yards away from large and lavishly decorated baths where once the inhabitants of Ostia used to spend their days. 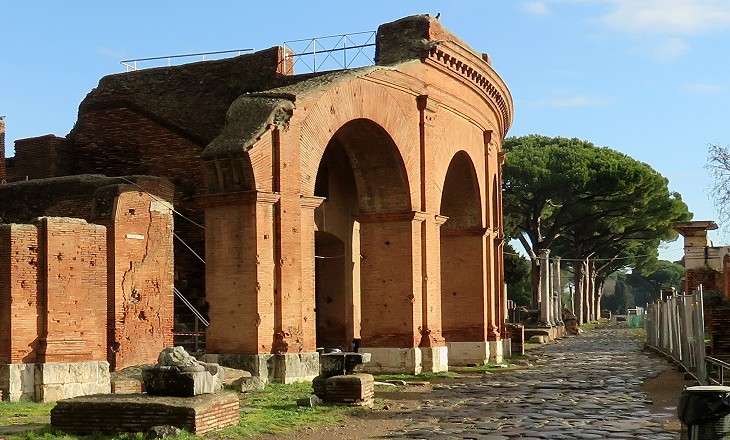 Decumanus Maximus: the Theatre and a remaining pillar of a triumphal arch on the other side of the street

The theatre was built by Marcus Vipsanius Agrippa, Augustus' son-in-law, but it was enlarged at the initiative of Emperor Commodus and completed by Emperor Septimius Severus in 196. The enlargement led to the building almost invading Decumanus Maximus. The external front is a reconstruction based on parts of it which had fallen to the ground and it does not include two upper storeys. Archaeologists found evidence that Emperor Caracalla built a triumphal arch across the street at the entrance to the theatre.
Wheel-ruts have been found on the section of Decumanus Maximus from Porta Romana to the theatre, but not beyond it. This suggests that wagons were not allowed to access the centre of the town.

Archaeologists are always keen on digging in order to see what is beneath. By making some tentative holes in Decumanus Maximus they found evidence of another street at a lower level and eventually of the gates of the castrum, the fortified camp from which Ostia originated. Experts do not agree on the date of its foundation and opinions vary from the Vth century BC to 267 BC, almost at the beginning of the First Punic War. 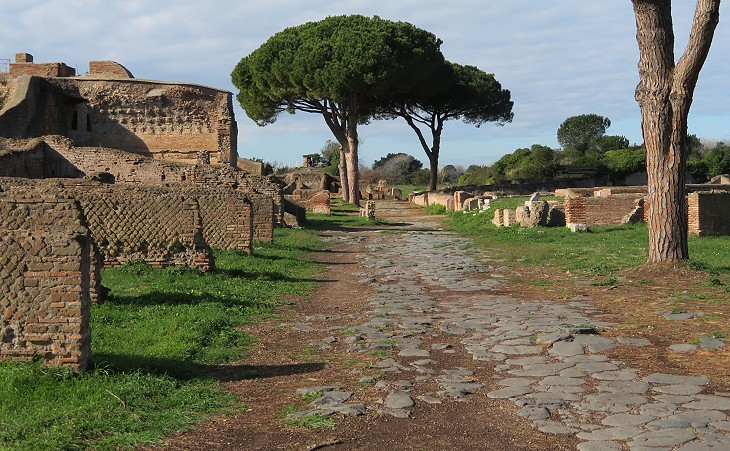 Decumanus Maximus forked after having crossed the Forum. The southern (longer) branch reached Porta Marina and continues to be known as Decumanus Maximus. The northern (shorter) branch led to the River Tiber and archaeologists called it Via della Foce (mouth). It is not flanked by large monuments and the neighbourhood it crosses provides many interesting insights into the everyday life of the inhabitants of Ostia. Its final section has not been determined with preciseness because of changes in the river banks, but the so-called Imperial Palace is situated near its presumable end. 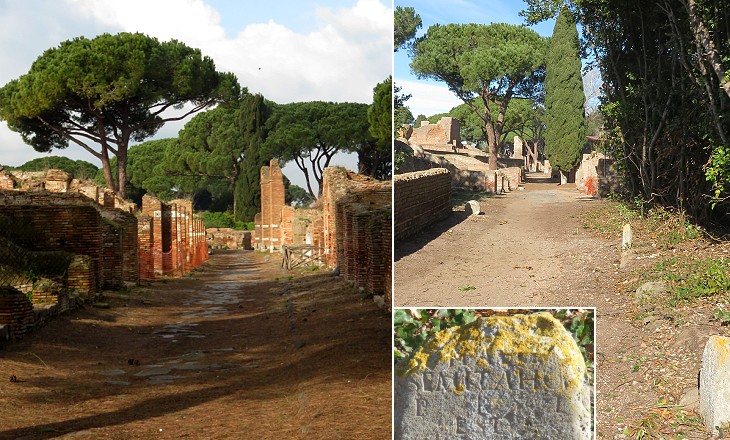 The east-west axis of Ostia was much longer than the north-south one, so the length of Cardo Maximus which began at Porta Laurentina, crossed the Forum and ended at the river harbour is much shorter than that of Decumanus Maximus. Travellers who entered Ostia at Porta Laurentina and wanted to go to the theatre, rather than to the Forum, could shorten their journey by taking another street which went north-eastwards. It is called Semita dei Cippi because archaeologists found two cippi (stones) bearing an inscription containing the word semita (Lat. path, minor street).

Section of Cardo Maximus behind the Capitolium

Cardo Maximus was interrupted at the Forum by the Capitolium, a temple built by Emperor Hadrian on a high podium. Its northern section from the Forum to the quay of the river harbour was flanked by porticoes with shops. 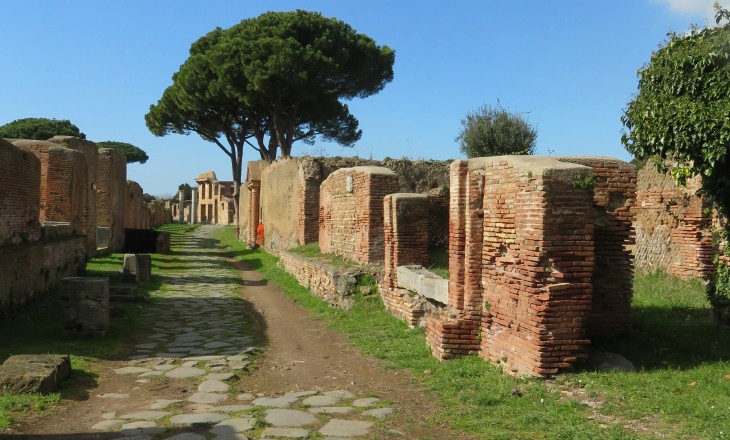 Cardo degli Aurighi, named after the House of the Aurighi (charioteers) which stands near the two columns, seen from Decumanus Maximus

Cardo degli Aurighi branches off Decumanus Maximus in a north-westerly direction and it runs parallel to Via della Foce. It was a wide and well paved street which ended at the river, perhaps where a ferry crossed the Tiber. Inscriptions have been found with lengthy lists of lenunculi (ferrymen) who had their own corporation. 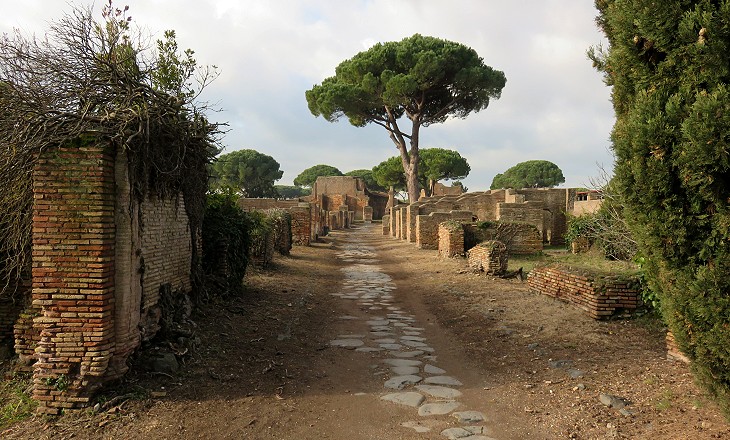 Via della Fortuna Annonaria. It runs parallel to Decumanus Maximus across the southern neighbourhoods

The net of large streets available to the inhabitants of Ostia included other decumani which did not cross the whole town, although in some instances they were rather long. Overall the streets designed a typical Roman or Hippodamian grid, i.e. they had intersections at right angles. 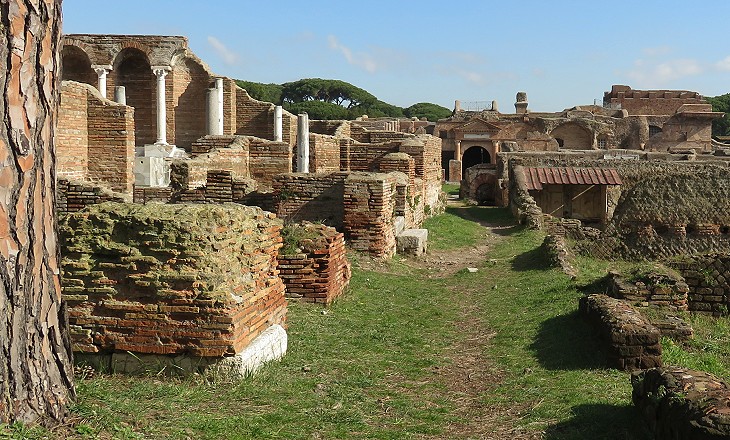 Archaeologists have numbered the insulae (blocks) of each of the five regions into which they divided Ostia and the buildings of each insula, so House of Cupid and Psyche is the fifth building of the fourteenth block of the first region.
The image used as background for this page shows a section of the stone pavement of Decumanus Maximus at Porta Marina. 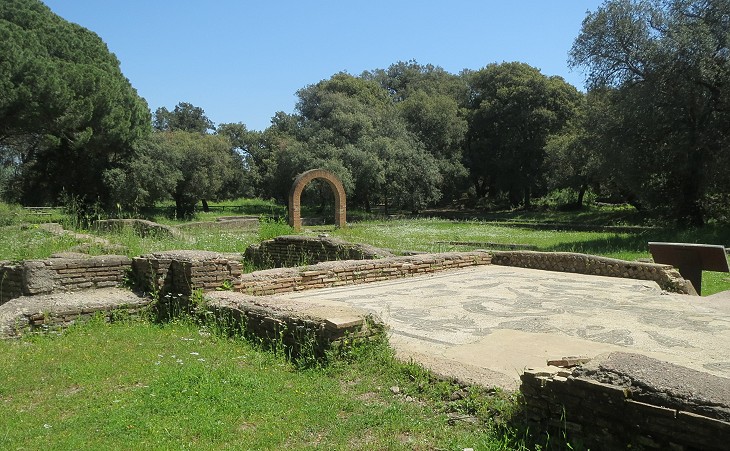 View of the main peristyle from the baths

In a pinewood near Villa Sacchetti di Castelfusano, along Via Severiana, parts of a Roman villa were excavated in 1713, 1934, and 1989-1992. In the 18th century it was suggested, that it was the Laurentine villa of Pliny the Younger, which the writer described in detail in one of his letters (Epist. II, 17), but there is nothing in its design which supports the identification. Archaeologist Antonio Maria Colini attributed its foundation in the early Ist century BC to Quintus Hortensius Hortalus, a friend of Cicero. 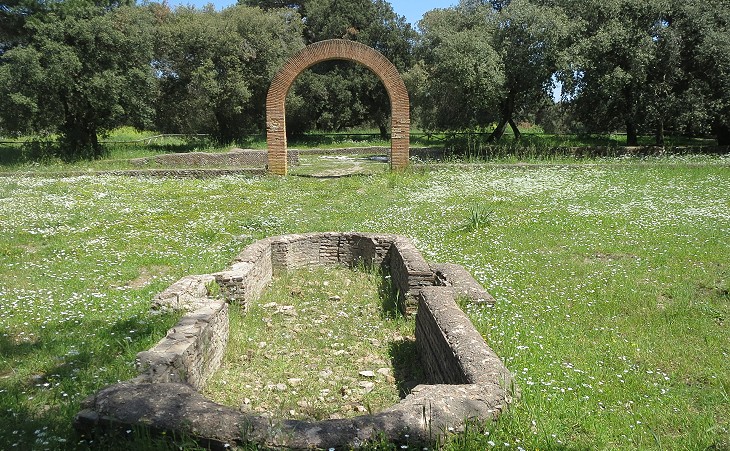 Reconstructed arch leading to a large room, most likely a triclinium, and fountain at the centre of the peristyle

The shore is beautified by a most pleasing variety of villa buildings, some of which are close together, while others have great intervals between them. Pliny. In antiquity the villa was very near the beach and most likely the southern side of the peristyle had an exit to it. The complex underwent many modifications, the most important, but not the last ones, at the time of Emperor Antoninus Pius.

To the west of the peristyle are bathing rooms. The analysis of their construction techniques indicates that they existed since the foundation of the villa, although their current appearance is the result of changes made in the IInd century AD. Here archaeologists unearthed a mosaic depicting Neptune and sea creatures which calls to mind those at Terme di Nettuno at Ostia. 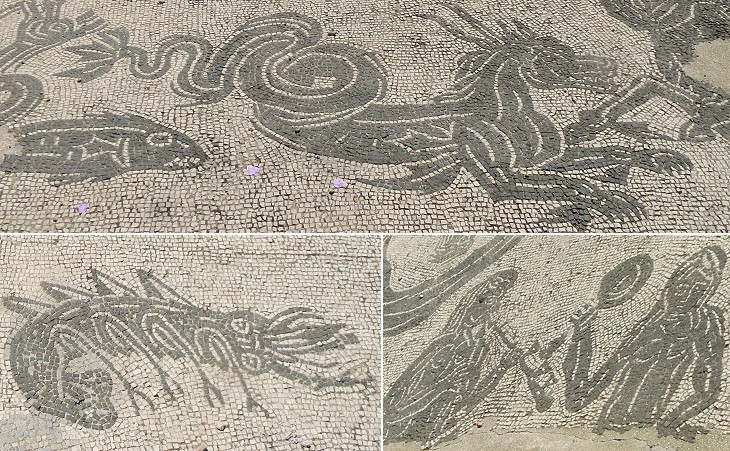 Details of the mosaic of the baths which in addition to sea creatures show a flute player and a woman with a sistrum, a musical instrument associated with the worship of Isis