Very early in the morning we drove by rough and often muddy roads towards some beautifully shaped mountains. We crossed brooks and flooded places where we looked into the blood-red savage eyes of buffaloes. They looked like hippopotamuses.
The country grew more and more flat and desolate, the houses rarer, the cultivation sparser. In the distance appeared some huge quadrilateral masses, and when we finally reached them, we were at first uncertain whether we were driving through rocks or ruins.
Johann Wolfgang von Goethe - Italian Journey - March 1787 - translation by W. H. Auden and E. Mayer - Collins 1962 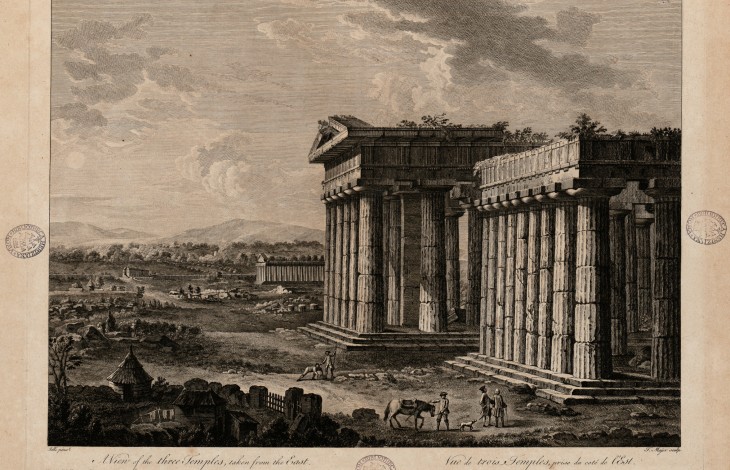 The Ruins of Paestum, otherwise Posidonia in Magna Graecia by Thomas Major: A View of the three Temples, taken from the East - London 1768 (from the copy at Bibliotheca Hertziana in Rome)

Not many years are elapsed since Paestum began to engage the attention of the literary world; the first publishers of its views inform us that an accidental visit of a painter to a town in the neighbourhood rescued these ruins from oblivion; but we are not therefore to suppose that Paestum had remained unknown, buried deep in impervious forests, and hidden for ages from the sight of man; it certainly never was surrounded with wood; and between the walls and the sea, a bare sandy down reigns along the coast. The pillars of Pesto have long been, and are to this day, a landmark for sailors, and are seen, as I can witness, from every part of the extensive gulph of Salerno.
Henry Swinburne - Travels in the Two Sicilies. 1777-1780
The temples of Paestum were "discovered" in ca 1745 almost at the same time as the first excavations in Pompeii. Similar to Goethe, many Grand Tour travellers made an excursion to Paestum after having seen Pompeii.
The illustrations of the book by Major made the temples popular among the educated public. They embellished the appearance of the buildings which, based on the account made twenty years later by Goethe, were partially hidden by spontaneous vegetation. 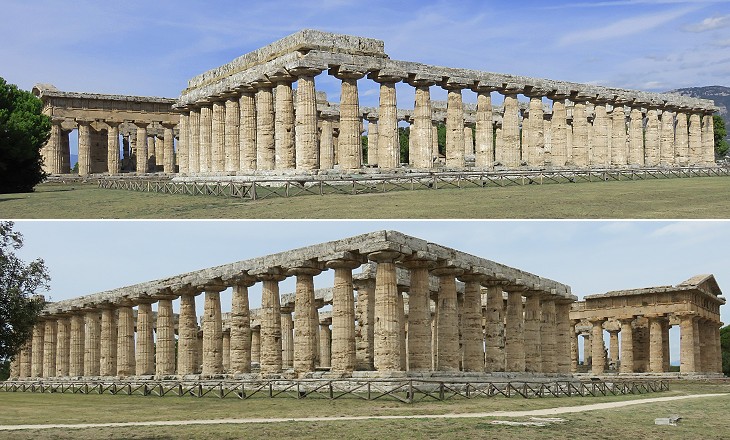 Major claimed his view of the temples was taken from the East, whereas it was taken from the West. The columns are taller in the book illustration than in reality and the pronounced entasis (bulge) of those of the Basilica was minimized.
Visitors to Paestum who had seen Major's or other popular depictions of the temples were confronted with something they were not prepared to see.
Our eyes and, through them, our whole sensibility have become so conditioned to a more slender style of architecture that these crowded masses of stumpy conical columns appear offensive and even terrifying. (..) Reproductions give a false impression; architectural designs make them look more elegant and drawings in perspective more ponderous than they really are. Goethe 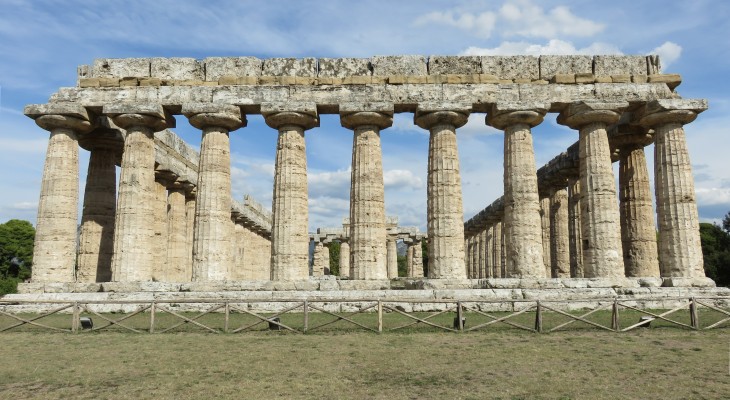 Goethe was accompanied by Cristoph Heinrich Kniep, a landscape painter he had hired to make drawings of the monuments he visited. Had he made photographs himself he would have been stunned by noting that the front of the Basilica had an odd number of columns (nine), something which is very rare to find in an ancient temple, because it makes the entering or leaving the building by a procession less solemn. The other two temples have fronts of six columns, similar to most ancient temples e.g. the Temple to Apollo in Corinth (only three are left); the fronts of the Parthenon and of the Pantheon have eight columns and that of the Temple to Apollo in Didyma had ten columns. 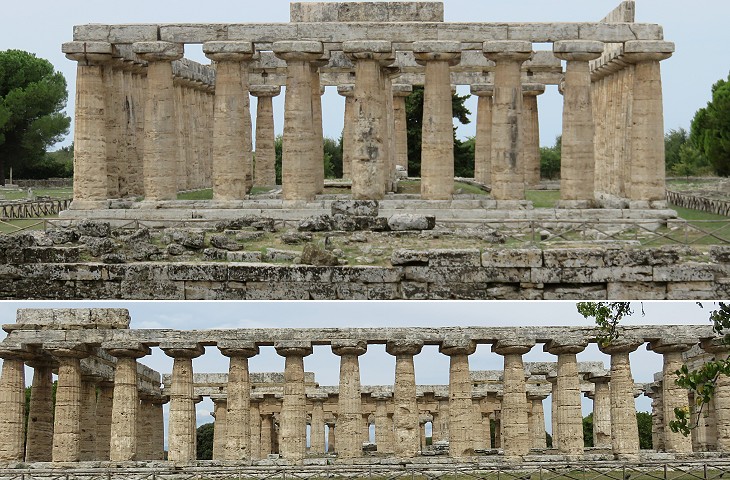 Basilica: (above) eastern front; (below) southern side

This edifice was most probably appropriated to the service of the public, either as a commercial exchange, a court of justice, or a senate house; the majesty of this ruin must excite admiration, even in those whose taste inclines them to relish only that luxuriant and ornamental species of architecture in which the ancient Romans delighted, and in which their successors, the modern Romans, have suffered their genius and imagination to wanton almost without bounds; an eye that brightens only with the view of nice Corinthian foliage, and the minute members of the composite order, will perhaps receive no delectable impression from the sight of such massive proportions, such simple and solid parts as these. Swinburne
In the XVIIIth century the building was believed to have housed tribunals or other public offices so it was called the Basilica. Archaeologists eventually found out that it was a Temple to Hera (Juno). It is the oldest of the three temples and this may explain why some of its features, i.e. the pronounced column entasis and the odd number of front columns, were corrected in the other two temples. 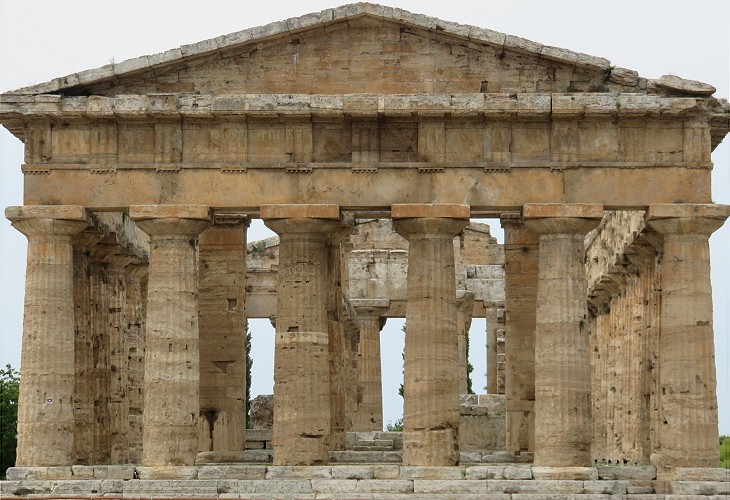 The three temples are peripteros, i.e. the cell containing the statue of the deity is surrounded by a row of columns on all sides. Greek temples had their entrance on the eastern side. Because of the loss of the decoration of the triangular pediment above the columns, today the eastern and the western fronts are almost identical.
This temple was the last to be built (ca 480 BC). It was believed to be dedicated to Poseidon (Neptune) because Posidonia, the early name of the town according to Pliny the Elder, suggested its main temple was dedicated to that god. Archaeologists, based on small statues and inscriptions found in the temple, have come to the conclusion it was dedicated to either Hera or Zeus or both. 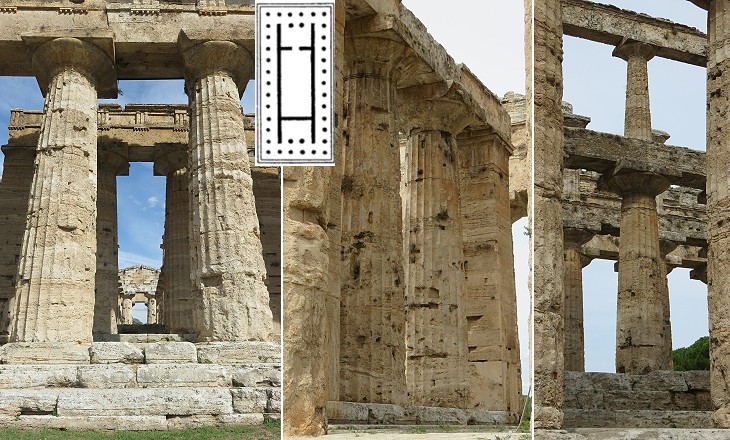 Temple to Neptune: views of the cella

The cella was very large (and tall). It actually was a temple in double antis: the walls of the cella were extended on both sides to form a pronaos (porch) on the eastern side and an opisthodomos (back room) on the western side. Some pilasters and columns of the cella have been reconstructed (you may wish to see a 1778 engraving by Giovan Battista Piranesi; it shows the plants which grew in the building and it opens in another window). 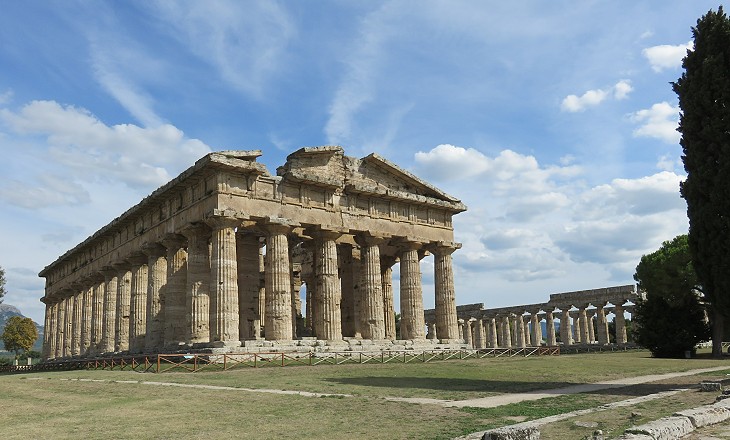 North-western view of the Temple to Neptune

I pulled myself together, remembered the history of art, thought of the age with which this architecture was in harmony, called up images in my mind of the austere style of sculpture - and in less than an hour I found myself reconciled to them and even thanking my guardian angel for having allowed me to see these well-preserved remains with my own eyes. Goethe
On entering the walls of Paestum I felt all the religion of the place. I trod as on sacred ground. I stood amazed at the long obscurity of its mighty ruins. Taking into view their immemorial antiquity, their astonishing preservation, their grandeur, or rather grandiosity, their bold columnar elevation, at once massive and open, their severe simplicity of design, that simplicity in which art generally begins, and to which, after a thousand revolutions of ornament, it again returns - taking, I say all into one view, I do not hesitate to call these the most impressive monuments that I ever beheld!
Joseph Forsyth - Remarks on Antiquities, Arts, and Letters in Italy in 1802-1803 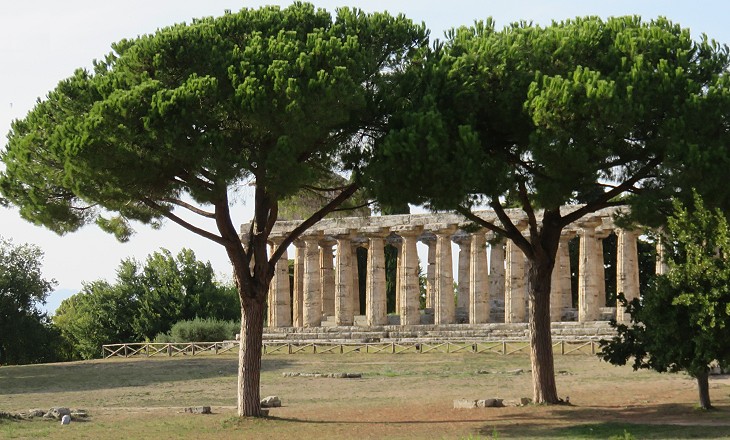 The temple of Ceres should be in a solitary spot out of the city, to which the public are not necessarily led but for the purpose of sacrificing to her. This spot is to be reverenced with religious awe and solemnity of demeanour, by those whose affairs lead them to visit it.
Marcus Vitruvius Pollio - de Architectura - Book I - Chapter VII:2 - translated by Joseph Gwilt
This sentence by Vitruvius about the best location of temples led to believing that a temple built at the northern end of Paestum in what appeared to be an isolated location was dedicated to Ceres, the Roman goddess of harvests.
Archaeologists found evidence that it was dedicated to Athena instead, but, similar to the other two temples, it is usually referred to by its historical name. 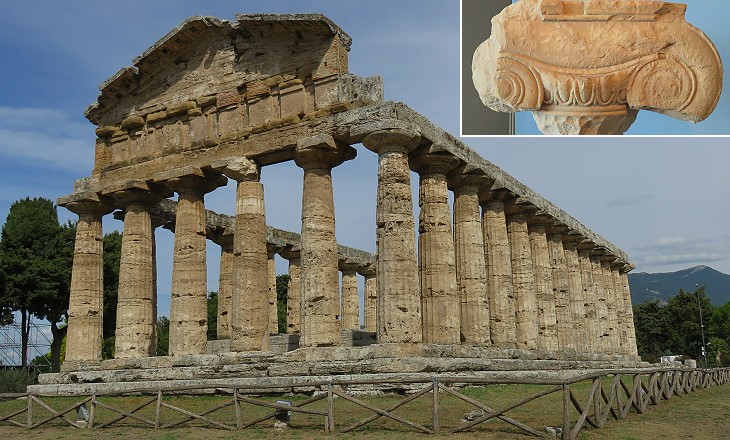 Temple to Ceres: south-western view; (inset) Ionic capital in the Museum of Paestum

The temples of Paestum were a source of inspiration for many poets and writers (and perhaps of some plagiarism).

Lo, far on the horizons verge reclined
A temple, reared as on a broken throne:
The suns red rays in lurid light declined
Oer clouds that mutter forth a thunder-tone,
Gleam athwart each aerial column shown
Like giants standing on a sable sky;
What record tells it in that desert lone?
Resting in solitary majesty
Eternal Paestum there absorbs the heart and eye.
John Edmund Reade from the poem Italy - 1838

(We turned) away (from Pompeii) to Paestum to see the awe inspiring structures built, the least aged of them, hundreds of years before the birth of Christ, and standing yet, erect in lonely majesty, upon the wild, malaria-blighted plain.
Charles Dickens - Pictures from Italy - 1846 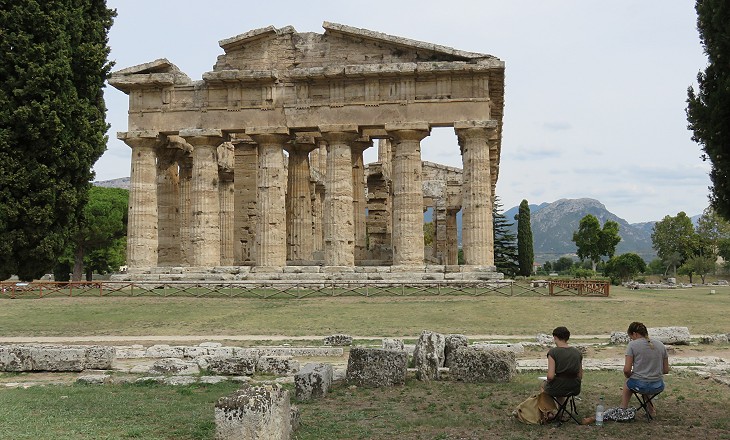 I was busily employed in drawing and measuring, when the boatman came to inform me that the sea was exceedingly ruffled by a strong north-west wind lately sprung up, and that it would be impossible to put out the boat again before night. As it was yet dangerous to sleep on that shore, I procured a calesso from the neighbouring town of Capaccio, and returned by land. Swinburne
The image used as background for this page shows a detail of the decoration of a column in the Temple to Neptune.

Move to:
The Walls
Other Monuments
Houses
The Museum