- Paphos
(Petra to Romiou, where Venus was born) 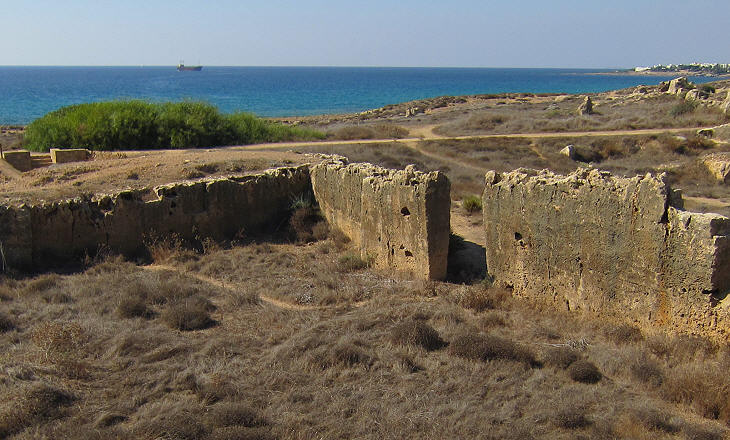 The Mediterranean Sea seen from the Tombs of the Kings

Paphos (aka Pafos) is situated at the south-western tip of the island. Its natural harbour was the first port of call for ships arriving from Greece and from Alexandria, the capital of Egypt during the Ptolemaic dynasty which ruled Cyprus in 305-30 BC. The town was known as Nea Paphos because it was founded by the inhabitants of Palaia (Old) Paphos in the IVth century BC. The latter location was renowned for a shrine to Aphrodite. 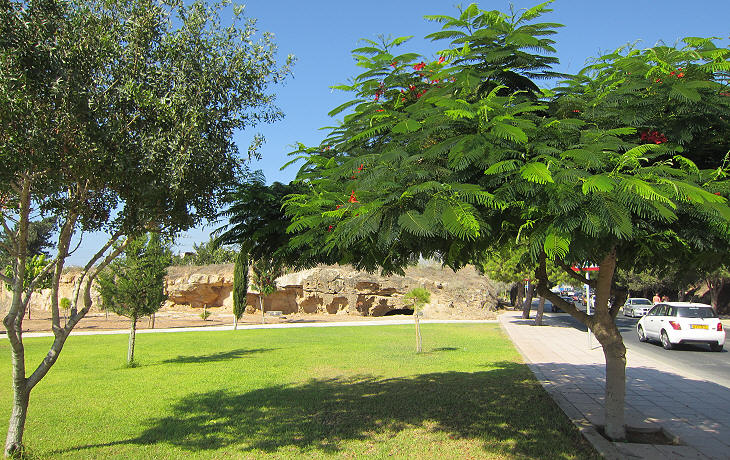 The new town did not have a defensible acropolis, but the rocks which surrounded it provided a natural fortification as they were easily cut and turned into walls which were strengthened by masonry towers. Nea Paphos needed fortifications because ships travelling between Crete and Cyprus were exposed to attacks by pirates who had their bases on the coast of southern Turkey. The pirates were a threat for towns too until they were eradicated by Pompey in 67 BC. 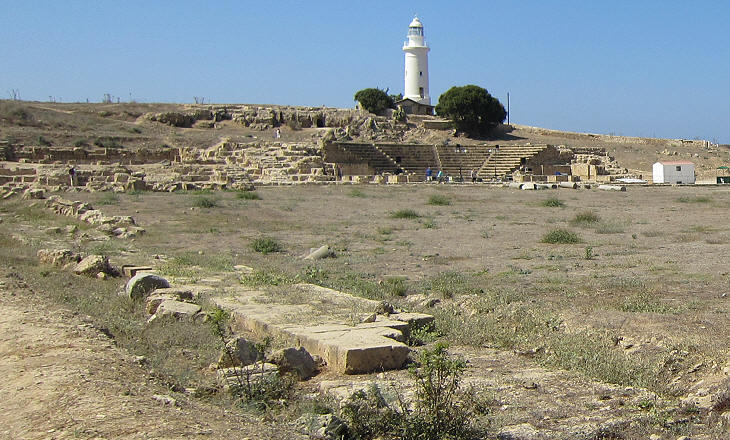 Agora/forum and reconstructed theatre (in 1888 British archaeologist David George Hogarth wrote: "A small theatre is situated in the hillside south of the lighthouse: no trace of its stone or marble seating is visible.")

The Roman governors of Cyprus resided at Paphos which remained for a long time the largest centre of the island, notwithstanding a strong earthquake which hit the town in 78 AD. Two other strong earthquakes hit Paphos in 332 and 342 and they caused a major decrease in its importance, because the government of the island was moved to Salamis on the eastern coast. The great columns which presumably supported the porticoes of the agora were eventually utilized as construction material for a fortress built by the Byzantines and redesigned by the Kings of Cyprus in the late XIIth century. The fortress most likely collapsed because of another strong earthquake in 1222. Owing to the granite columns which remained visible in the rubble and vegetation, the site became known as Saranda Kolones (Forty Columns). In 1815 ca British traveller William Turner was told it was the Tomb of Venus: We walked to the hill where is the ruin which the inhabitants call the Tomb of Venus which is about 100 paces north of the port. Over its surface which is of very considerable extent and in its immediate environs are scattered a great number of grey granite columns of which all I saw were broken. He admitted however that Andrea, his local guide, probably was a better fisherman than antiquary. 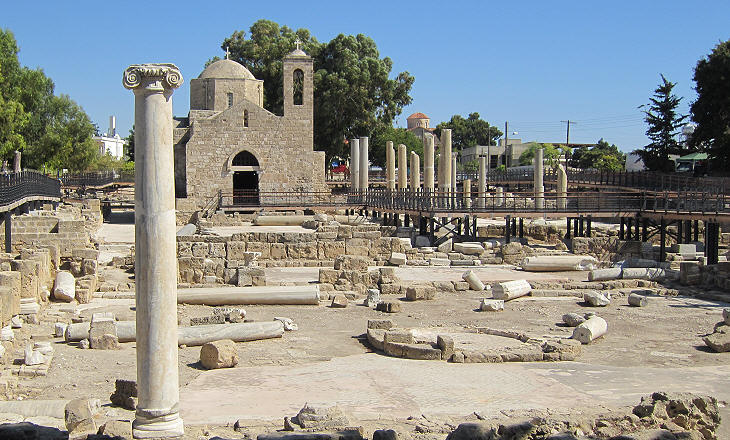 Panagia Chrysopolitissa and Agia Kyriaki; in the foreground an ancient cipollino column (see more columns in the introductory page)

A very large basilica was built after the IVth century earthquakes making use of columns taken from fallen buildings. It had seven naves and it was probably destroyed by the Arabs during one of their raids along the coast of Cyprus. Agia Kyriaki is a small XIth century church built on the apse of the ancient basilica. It was redesigned in the XVth century. 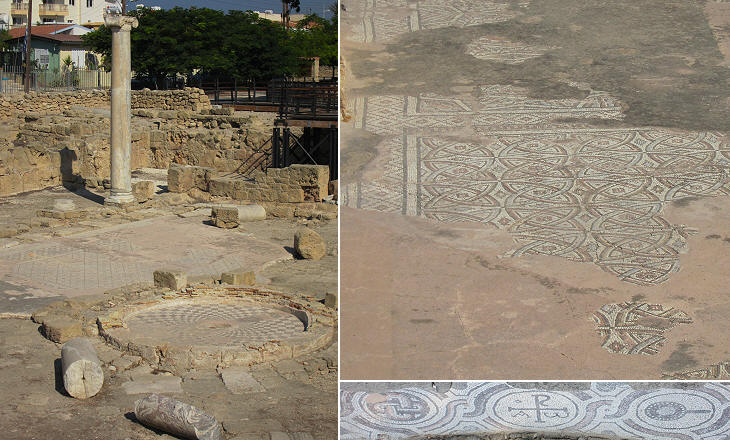 Panagia Chrysopolitissa: ancient mosaics (you may wish to see a collection of Early Christian mosaics in Lebanon)

The basilica was decorated with a variety of geometric mosaics and with columns and capitals of different marbles. It was preceded by another large building decorated with mosaics, one of which can be seen in the image used as background for this page. The size of the basilica was reduced to five naves in the VIth century, probably because of the dwindling population of the town. 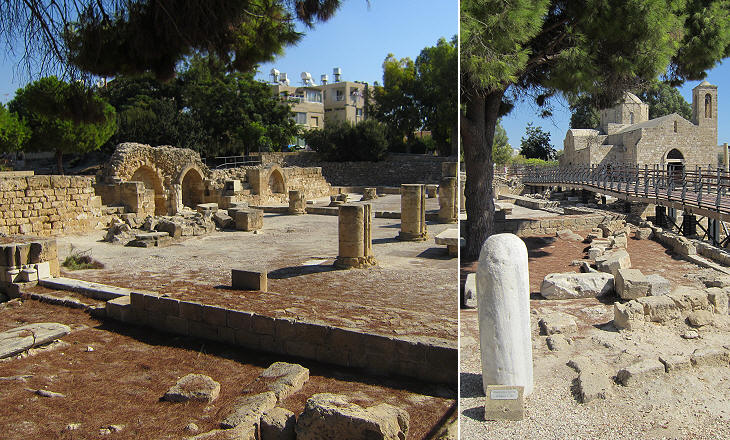 It is truly an extraordinary grace for us to gather together in prayer in this Church of Agia Kyriaki Chrysopolitissa. We have just heard a reading from the Acts of the Apostles which reminds us that Cyprus was the first stage in the missionary journeys of the Apostle Paul (cf. Acts 13:1-4). Set apart by the Holy Spirit, Paul, accompanied by Barnabas, a native of Cyprus, and Mark, the future evangelist, first came to Salamis, where they began to proclaim the word of God in the synagogues. Traversing the island, they reached Paphos where, close to this very place, they preached in the presence of the Roman pro-consul Sergius Paulus. Thus it was from this place that the Gospel message began to spread throughout the Empire, and the Church, grounded in the apostolic preaching, was able to take root throughout the then-known world.
Pope Benedict XVI - Friday, 4 June 2010 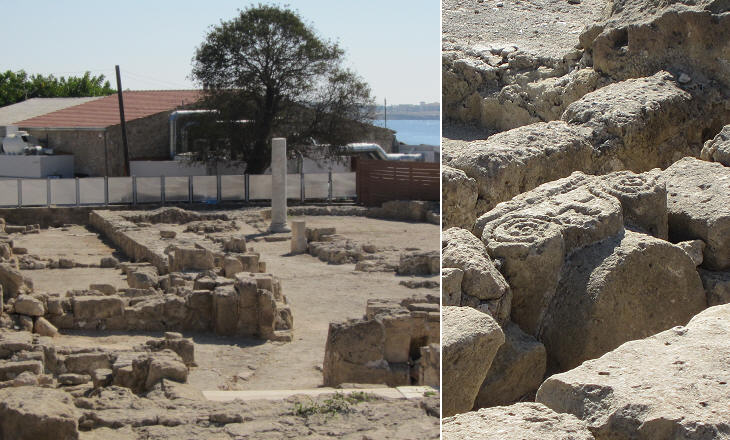 Christian basilica near the harbour and a capital with the cross

In the large archaeological area which includes the agora, Saranda Kolones and a series of private houses (see page two) there is no evidence of early churches, whereas Panagia Chrysopolitissa and another church are situated near the harbour. Probably after the earthquakes of 332 and 342 the population rebuilt only a small part of the ancient town. 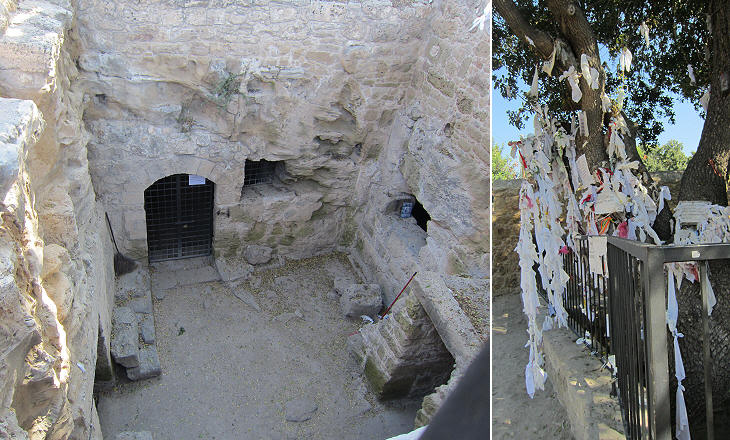 An ancient tomb cut into the rock immediately outside the walls was turned into a church dedicated to a hermit who lived in a cave. The cloths on the tree are from people seeking help with health problems, in particular those related to eyesight.

Tombs of the Kings 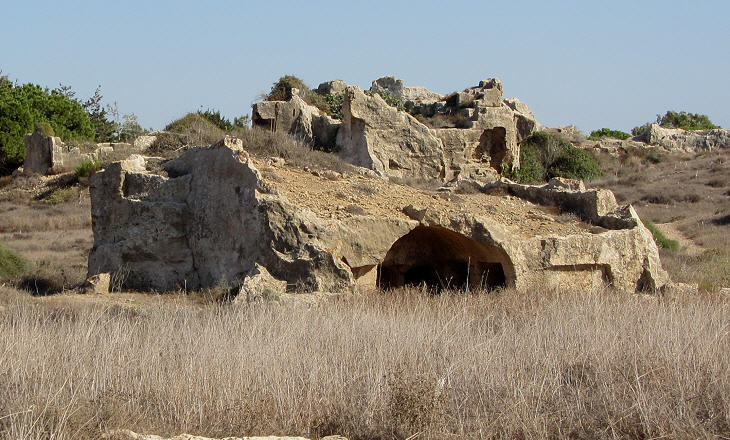 These ruins are called by the general name of Palaio Kastro (Old Fortress), and their appearance is most extraordinary. They occupy a spot of ground which is covered by a mass of solid rock, more or less high and hewn into numerous caves which appear to have been catacombs, but now are so choked up, that it is impossible to see whether they all communicate with each other. These caves are more or less large, and within them are others cut of a shape evidently meant for tombs, about ten feet long, three broad, and four high.
William Turner - Journal of a Tour in the Levant - 1815 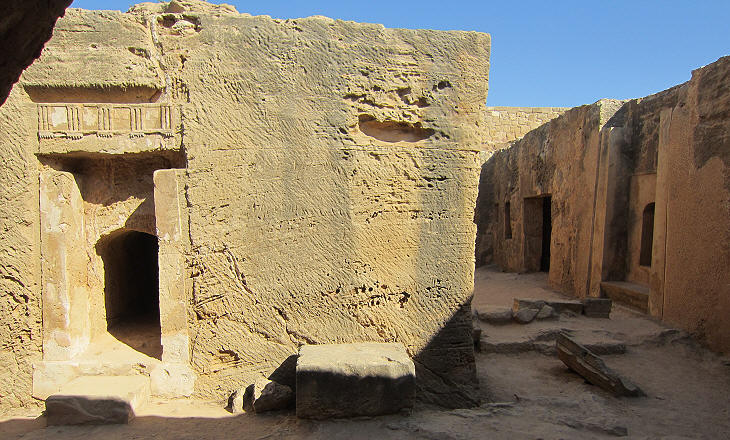 Over the entrance to many of the caves are carved architraves, slightly adorned in various ways. There are above fifty of the larger caves, and above 100 of them in all; they serve as stables to the donkeys of the neighbourhood. Turner
You may wish to see the Roman necropolis of Carmona in Spain which was cut into a limestone rock. 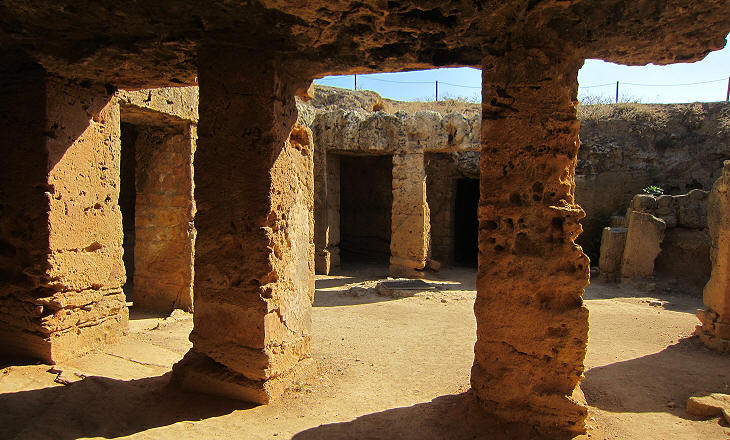 Sometimes the rock was so low, and the ceiling so thin that the excavated part, to prevent its falling in was supported by Dorick fluted columns, ten feet high, hewn out of the rock, which the Turks have broken off and carried away to adorn their mosques. Turner 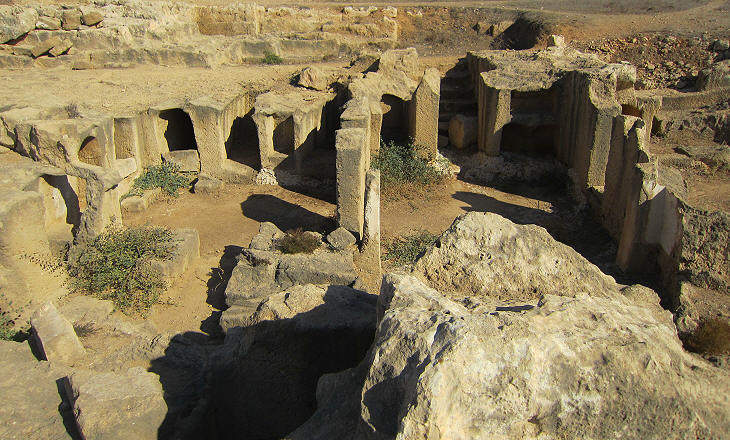 The tombs are for the most part on the north and west of the city (..) but so thorough has been the search for treasure in past ages that it would probably be impossible to find a single unrifled tomb, nor has any tradition of the character of the spoil survived.
David George Hogarth - Devia Cypria - Notes of an Archaeological Journey in Cyprus in 1888 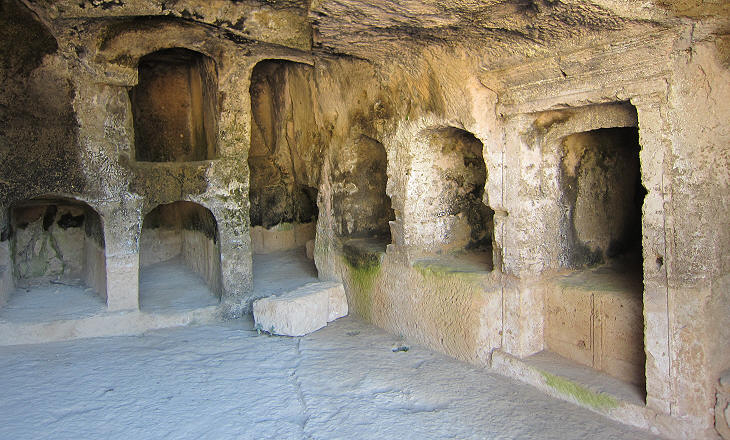 Today an archaeological area including part of the necropolis described by XIXth century travellers is officially known as Tombs of the Kings. The name is not supported by any evidence of royal tombs, but its reference to kings is more appealing then Palaio Kastro. The area contains eight large tombs which were excavated during the Ptolemaic period and continued to be used during the Roman one. They were decorated with plaster and very rarely with geometric mosaics. 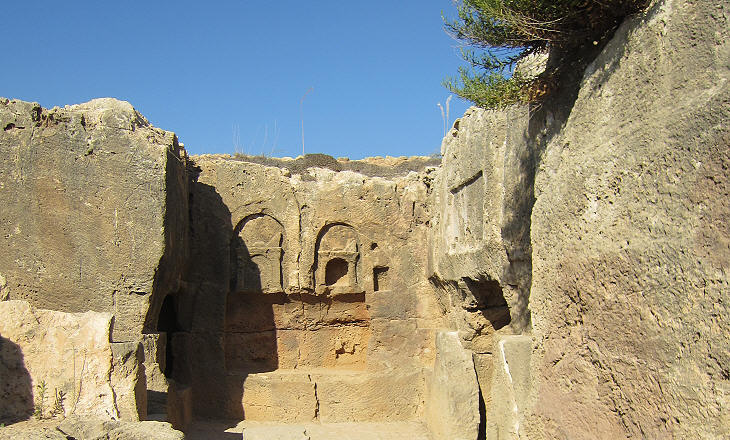 Go to page two and see the mosaics found at Paphos or move to:
Introductory Page
Kourion
Amathous and Kition
Salamis