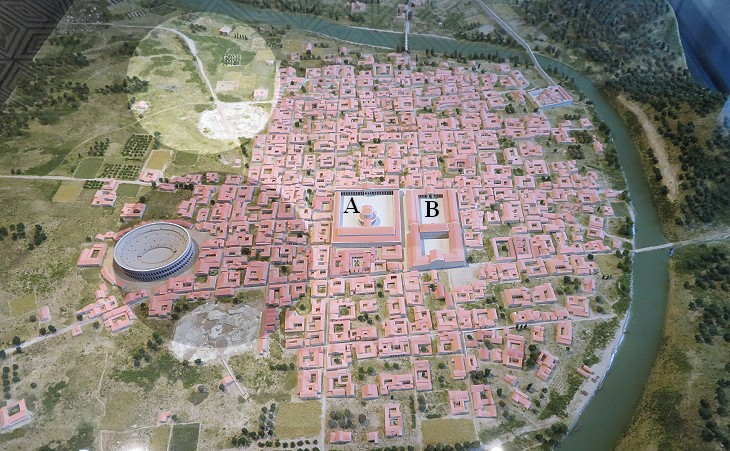 Vesunna Gallo-Roman Museum: model of the Roman town at the peak of its development in the early IIIrd century AD: A) Temple to Vesunna; B) Forum; the darkened circle roughly indicates the site of the town after 284 AD and the brightened one that of Puy-Saint-Front, a new medieval settlement

Périgueux is situated on the rt bank of the river L'Isle which was canalised in 1837. (..) The first ancient name of this city was Vesuna, retained in the tower de Vesune, a circular edifice of Roman construction, 100 ft high, its walls 6 ft thick, without doors or windows. (..) At a later period the name Vesuna was changed to Petrocorii, whence Périgueux.
John Murray III - Hand-book for Travellers in France - 1843
Adjoining the province of Narbonensis are the Ruteni, the Cadurci, the Nitiobriges, and the Petrocori, separated by the river Tarnis from the Tolosani.
Pliny the Elder - Historia Naturalis - Book 3 - Translation by John Bostock and Henry Thomas Riley.
The initial complete name of the Roman town is not exactly known: the discovery of an altar to Tutela Augusta Vesunna led to assuming that the name of a local goddess indicated also the town, but other inscriptions suggest that in the IIIrd century it was referenced to as Civitas Petrocorium, which was eventually corrupted into Cité de Périgueux. 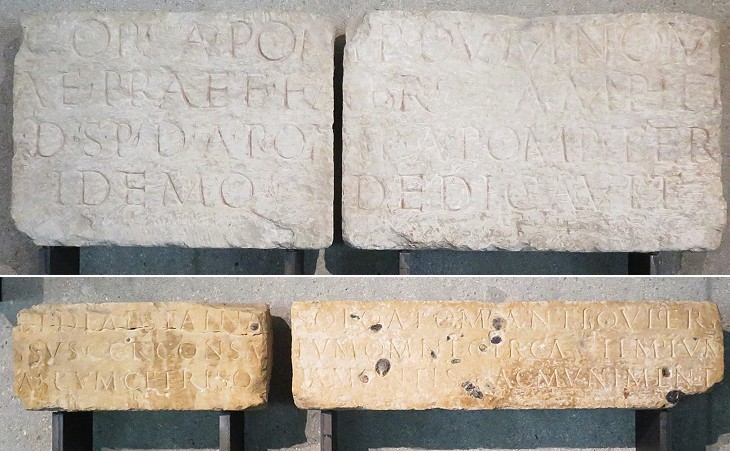 Vesunna Gallo-Roman Museum: inscriptions celebrating the construction of the amphitheatre with a reference to the Petrocorii (above) and of a wall surrounding the Temple to Vesunna and two adjoining basilicas (below); both initiatives were promoted by members of a family (Pompeia) of Roman origin

The Gauls summoned a council of chiefs and determined not to call up (according to the proposal of Vercingetorix) all who could bear arms, but to require of each chief a certain quota from his state; for they feared that with so large a host herded together they might not be able to preserve discipline, to distinguish their several contingents, or to secure a supply of corn. (..) They required (..) five thousand each from the Suessiones, Ambiani, Mediomatrici, Petrocorii, etc.
Julius Caesar - The Gallic Wars - Book 7 - Translated by W. A. McDevitte and W. S. Bohn
The Petrocorii (a middle-sized Gallic nation) were made to pay a price by Caesar for having supported Vercingetorix, but at the time of Emperor Augustus the region where they lived was pacified and it was included in Gallia Aquitania, one of the three provinces into which the territories conquered by Caesar were divided into. 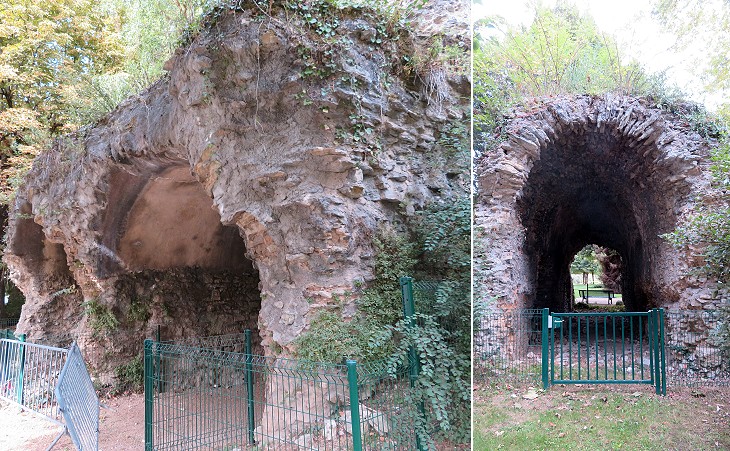 Traces of a Roman amphitheatre and arch in the town also still exist. Murray
The settlement of the Petrocorii was redesigned in line with Roman patterns and it rapidly developed. The exact legal status of the town is uncertain, but in the inscription celebrating the wall around the Temple to Vesunna, the letters C. C. R. have been interpreted as curator civium Romanorum, i.e. representative of the Roman citizens. This suggests that a sizeable number of inhabitants had or were granted Roman citizenship. At the time of Emperor Tiberius an amphitheatre was built at the western end of the town. It is estimated it could accommodate an audience of 18,000. 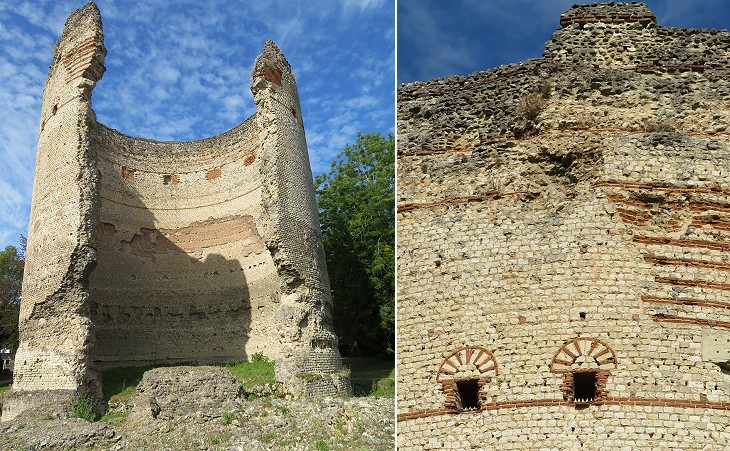 Tour de Vésone (see other images in the introductory page)

It is supposed to have been a tomb and is situated in a suburb called La Cité which contains another ancient church. Murray
The name of the goddess might have meant ves (valley) plus ona (stream/fountain). A temple to her was built at the beginning of the IInd century AD. Its height is unusual for a Roman temple and it recalls the Temple to Janus at Autun which also has a very tall cella. Its design was probably based on that of the Pantheon because we know that the round cella was preceded by a portico. It was turned into a defensive tower and this prevented its dismantling to reuse its materials, but in a 1575 print it was already depicted as a ruin. The monument was visited in 1845 by Prosper Merimée (1803-1870), a French writer who at the time was Inspector-General of Historical Monuments, who took the first steps for its conservation. 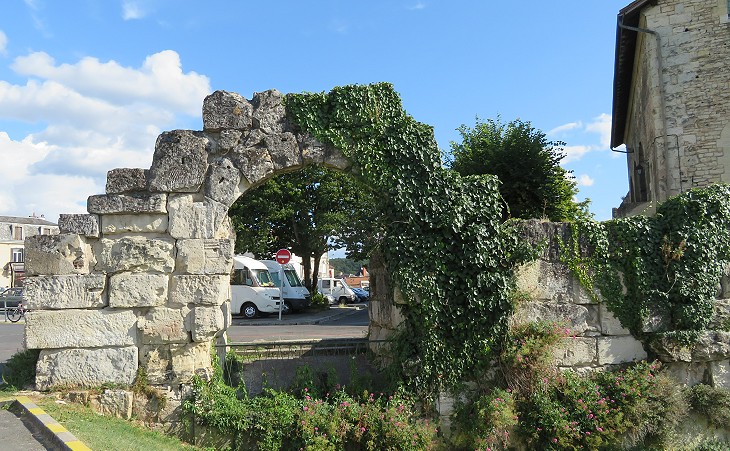 The peaceful life of the citizens of Vesunna came to an end in ca 275 when the town was raided by Franks and Alemanni during a period of anarchy in the Roman Empire. The Rhine/Danube border defence lines were repeatedly broken by Barbarian tribes and even Athens was sacked in 267. Rome itself was at risk of raids and new walls were built to protect it.
The raid and pestilences had reduced the population of Vesunna and the town inside the new walls was only a fraction of the previous settlement and it did not include the Forum and the Temple to Vesunna. The amphitheatre was turned into a large bastion of the walls. 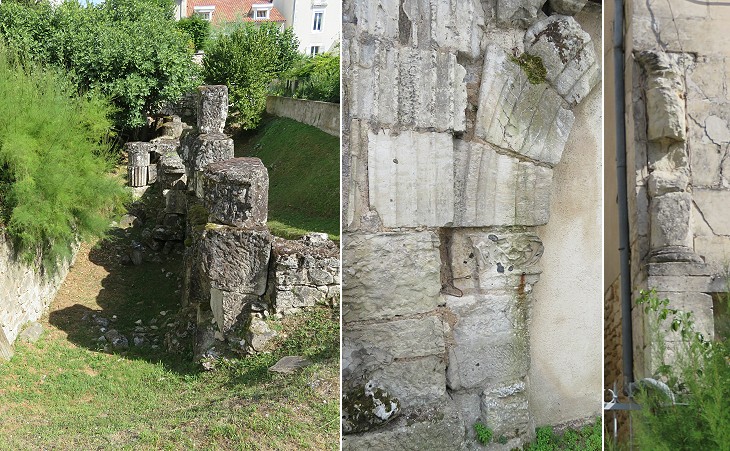 The walls were built with materials taken from the abandoned part of the town, similar to what occurred at Burdigala (Bordeaux) and at Narbo Martius (Narbonne). Roman altars, tombs and architectural elements were found when parts of the walls were dismantled to favour the modern development of Périgueux. 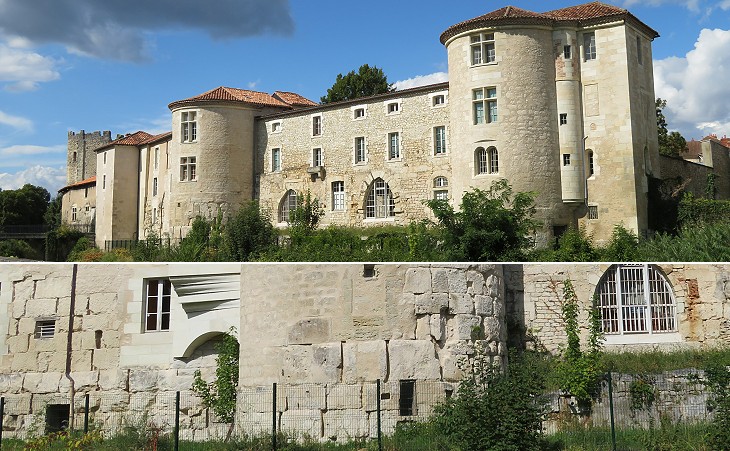 The Roman walls were incorporated into fortified houses of local feudal lords and the amphitheatre became a castle of the Counts of Périgord, the historical region surrounding the town. This process has saved several sections of the walls. Their view was made more evocative by the large trench which was dug for the passage of a railway line in the 1860s. 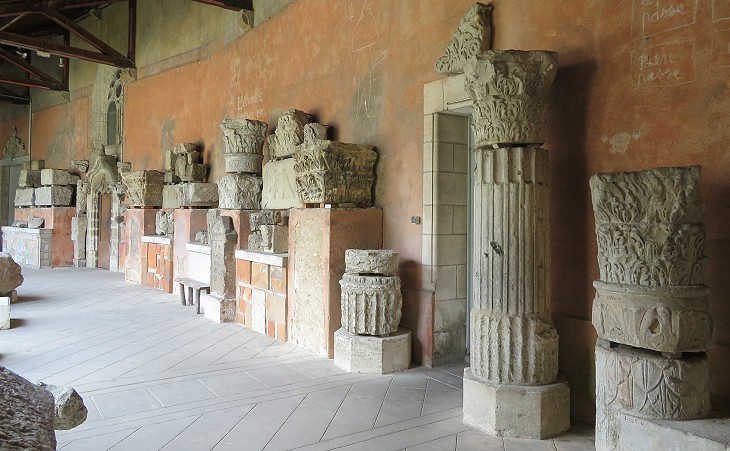 Dismantlements of parts of the walls and excavations of the area surrounding Tour Vésone began in the 1820s at the initiative of Count Wlgrin de Taillefer, who wrote a very detailed account of the antiquities of Vesunna; his name was Henry François Athanase, but he chose to be called Wlgrin after his ancestor Wlgrin or Vulgrin, Count of Périgord in 866-886. The first findings were placed in an open area of the amphitheatre, but in a few years so many ancient materials were found that in 1835 a museum was built to house them and those found in Périgord. In 1895 the museum was moved to a former convent which was almost entirely redesigned to adapt it to its new function. In 2003 the Vesunna Gallo-Roman Museum was opened and the exhibits related to Vesunna were moved there. 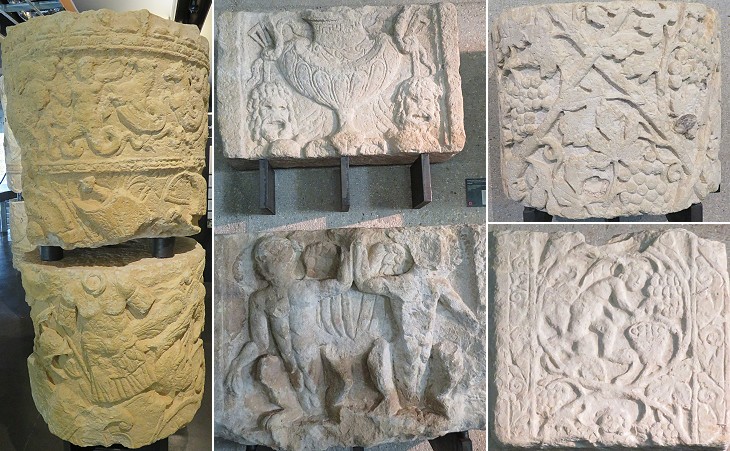 In dismantling the walls archaeologists found many columns, capitals and other architectural materials which were made of a local limestone and were finely sculptured. The subjects of their reliefs were typical of a Roman town: military trophies, theatrical masks and scenes related to viticulture, an important economic resource of Vesunna. Kilns for making amphoras for the transportation of wine on river boats were discovered in the environs of Périgueux; they were dated ca 50 AD, which can be regarded as the starting moment of mass winemaking in Périgord. 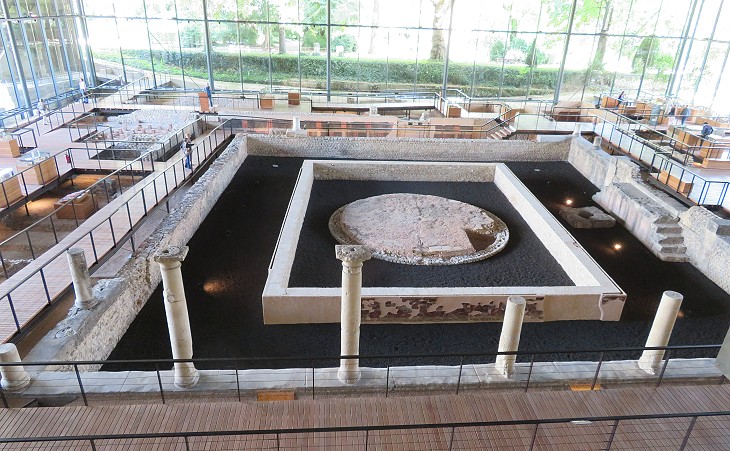 In 1959 excavations for the development of a public housing complex unearthed a large Roman domus (urban house) west of Tour de Vésone. In the past the traditional approach of French authorities was to accurately inspect the area where some ancient materials had been found, to recover and move to a museum those which were of artistic or historical value and then to let the owners of the area to go ahead with their development plans. This practice was not specific to France. The domus however was an almost unique monument of Vesunna and it was decided to build a museum for the Gallo-Roman antiquities of Périgueux around its courtyard to preserve its very fine frescoes in situ.
Architect Jean Nouvel designed in 1993 the structure which protects the ancient house and in addition displays the exhibits from Vesunna on a series of terraces (you may wish to see a similar building for a Roman villa at Ahrweiler and at Cologne). It was inaugurated in 2003. 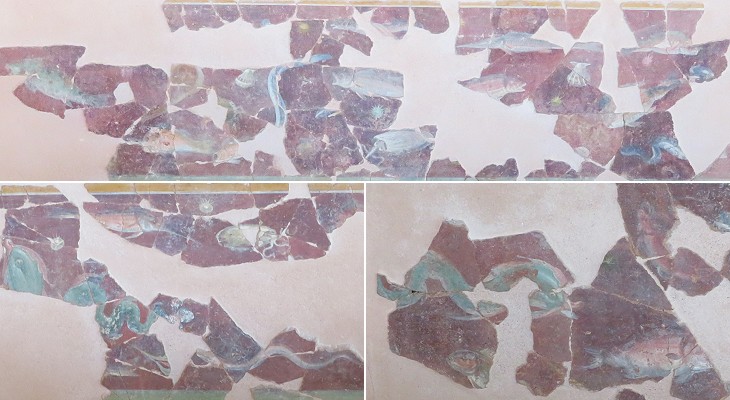 Vesunna Gallo-Roman Museum: frescoes in the peristyle of the Roman house

The house was inhabited from the Ist to the IIIrd century and it was repeatedly modified. During one of these changes the level of the floors was raised by about one meter, thus covering the lower part of the existing walls in the peristyle and preserving from total destruction the frescoes which embellished them. The frescoes on the walls surrounding a square garden depicted fish and sea creatures against a red background, something which can be noticed also at Villa di Poppea at Oplontis (with birds and trees replacing fish). Sea creatures were very popular decorative subjects and some floor mosaics are veritable illustrated catalogues of them, e.g. those found at Tarragona and in Tunisia. 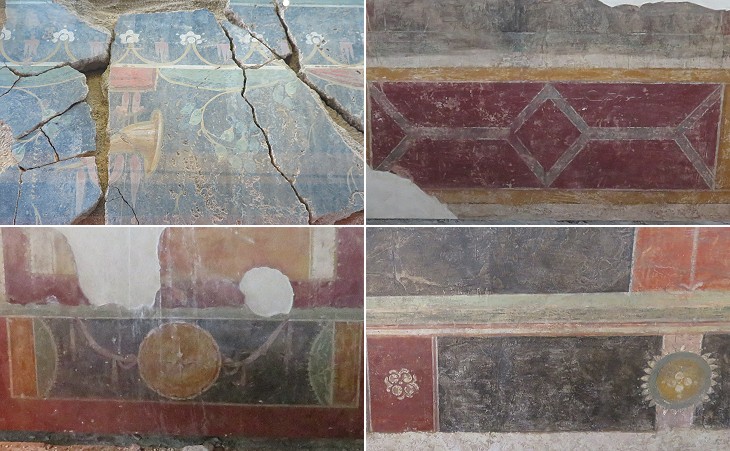 Vesunna Gallo-Roman Museum: other frescoes in the Roman house

The other walls which escaped destruction were painted with a variety of decorative motifs, some merely geometric, others with small flowers, all on the red and black backgrounds which can be seen at Pompeii. You may wish to see some fine frescoes on a black background at Saint-Romain-en-Gaul near Vienne.
Some rooms of the house had a heating system; archaeologists have identified the sites of the kitchen, of a small dining room, of a reception hall which had a view over the peristyle, and of private baths. 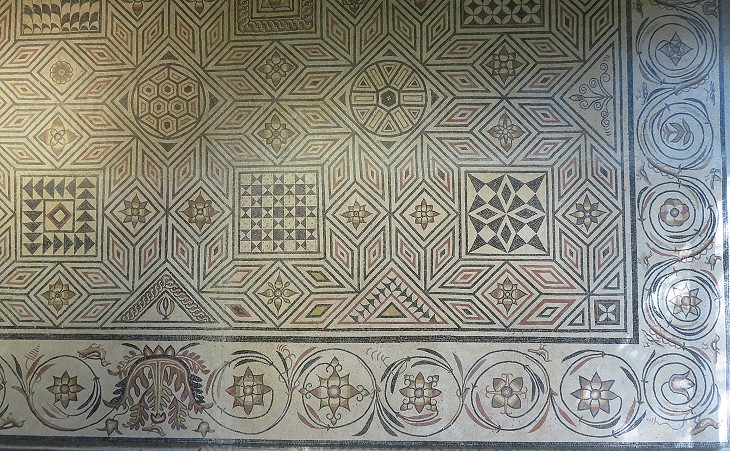 Rue Mosaique is the name of a street to the east of Tour de Vésone. It is so named because in 1865, during the construction of a railway line, a Roman house was found in its proximity. A large floor mosaic with a complex geometric pattern was deemed worthy of being restored and it was moved to the museum, but the site of the house was sacrificed to modernity. The statue of Jupiter is dated IInd century AD; the left hand holds a wheel, a symbol of Taranis, a Gallic/Celtic god of thunder who was associated with Jupiter.
Caesar noted that Mercury was widely worshipped in Gaul and actually many reliefs of the god accompanied by a horned animal, a symbol of a local deity, have been found in France and Germany.
The opposite side of the altar with the head of a bull has a long inscription with a dedication to Magna Mater by Lucius Pomponius Paternus, of the gens Quirina, priest at Lyon.
The image used as background for this page shows a head of Juno at the Gallo-Roman Museum of Vesunna.