Chorus: Here we are, the faithful Council of the Persians, who have gone to the land of Hellas, we who serve as warders of the royal abode, rich in bountiful store of gold, we whom Xerxes, our King, Darius' royal son, himself selected, by virtue of our rank and years, to be the guardians of his realm.
First lines of The Persians by Aeschylus - Translation by Herbert Weir Smyth.
The Persians is the oldest tragedy the text of which has survived until the present day. 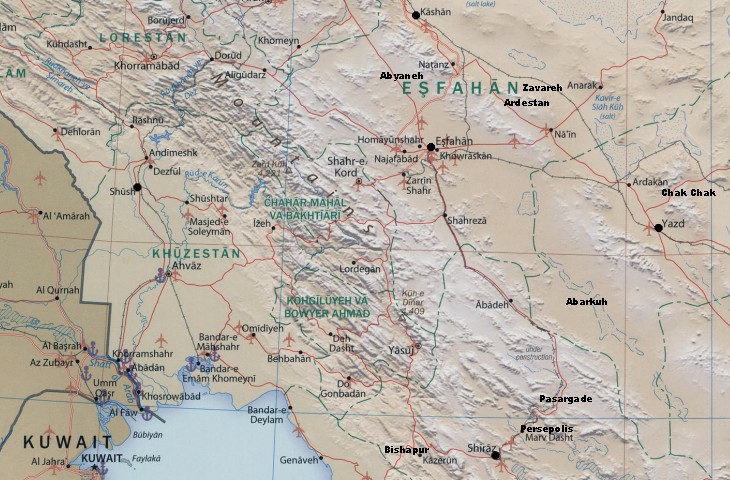 The tragedy is set at Susa, today's Shush in the Khuzestan province of Iran, one of the four capitals of the First Persian Empire. The others were Babylon, Ecbatana and Persepolis (in Greek: City of the Persians). 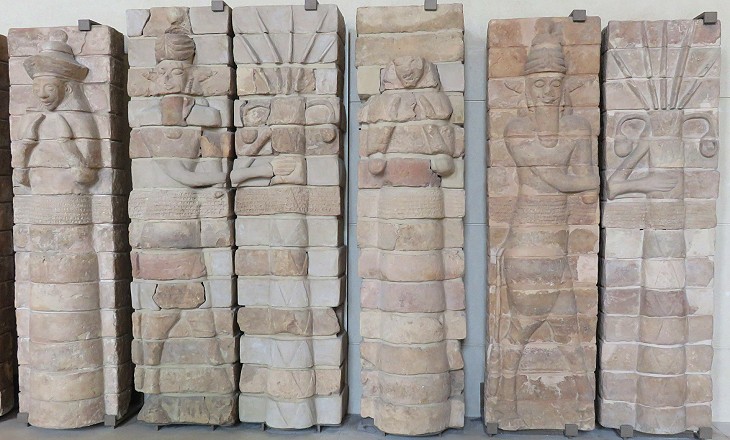 Louvre Museum in Paris: XIIth century BC brick relief found at Susa (at that time the city was the capital of the Elamite Empire). It portrays Ninhursag, a mother goddess, with the spirit of the forests next to the seven-spiked cosmic tree of life. The art of the First Persian Empire had many points in common with those of previous empires in Persia and Mesopotamia

A vast tableland in today's Central Iran was the cradle of the empire founded by Cyrus the Great in ca 550 BC. He and his successors claimed to be descended from Achaemenes, a legendary ruler of that region.
In the following centuries another three cities in this tableland (Bishapur, Isfahan and Shiraz) became capitals of Persia.
A journey through Central Iran is therefore a journey through history and the pages of this section are arranged in roughly chronological order from archaeological sites of the VIth century BC to palaces of the early XXth century. 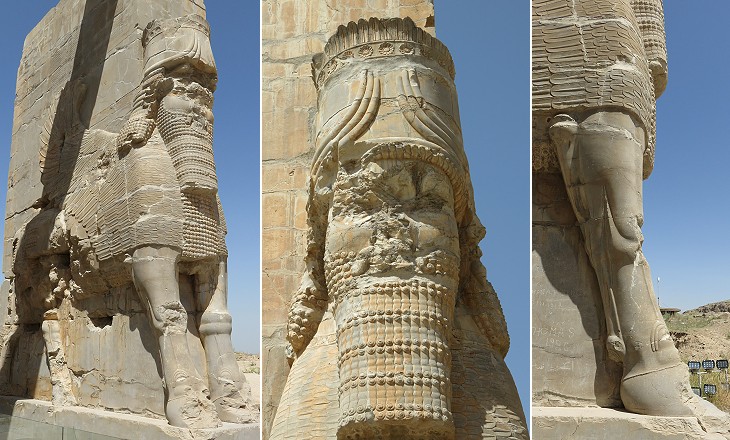 Persepolis - Gate of All Nations - reliefs portraying a lamassu, a winged bull with human face, a deity of Assyria (Northern Mesopotamia), one of the countries conquered by the Persians

The Achaemenid Empire achieved its greatest strength and largest extent with the successors of Cyrus: Cambyses, Darius and Xerxes. It spread over three continents: from Thrace in Europe and Egypt in Africa to the deserts of Central Asia.
Messengers carried news from Sardis near the Aegean Sea to Susa along the Royal Road and according to Herodotus (History 8.98) neither snow, nor rain, nor heat, nor darkness of night prevents them from accomplishing their task.. The James Farley Post Office, a NYC landmark, is famous for bearing an inscription with this sentence. 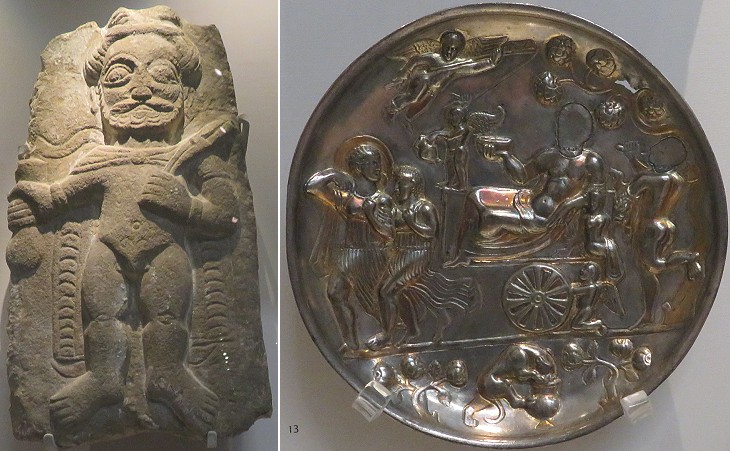 Weakened by its own vastness and by dynastic quarrels the Achaemenid Empire fell to Alexander the Great in 334-330 BC. Central Iran became part of the Seleucid Empire based in Syria, but only for a short time because in the IIIrd century BC Persia was conquered by the Parni, a tribe coming from Central Asia. They became known as Parthians after the name of the country they had subdued. In 64 BC Pompey marched into Syria and deposed the last Seleucid king. Thus the Romans came into direct contact with the Parthians and a confrontation which lasted seven centuries began. In 53 BC the Romans were defeated at Carrhae, but over time they gained control of the upper valleys of the Euphrates and Tigris Rivers. Emperor Trajan invaded Mesopotamia and captured Ctesiphon, the Parthian capital near today's Baghdad, in 116 AD. 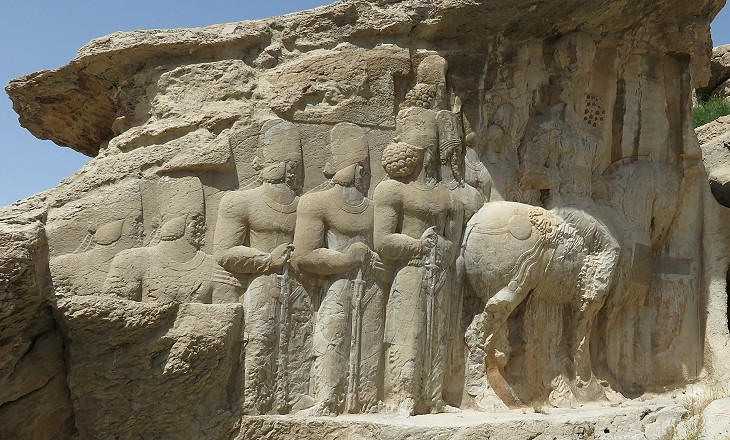 Naqsh-e Rajab - Relief portraying King Shapur I and his court

At the beginning of the IIIrd century the Parthian rulers were replaced by the Sassanid ones who originated from the province of Fars, the homeland of the Achaemenids. They wanted to win back the territories which once were part of the First Persian Empire. King Shapur I repeatedly defeated the Romans and Emperor Valerian was taken prisoner and never released. Bishapur, a new capital, was most likely built by enslaved Roman legionaries. The confrontation with the Romans/Byzantines continued in the following centuries. King Shapur II imposed a humiliating peace upon Emperor Jovian in 363 and King Khosrau II briefly conquered Egypt and Syria in the early VIIth century. 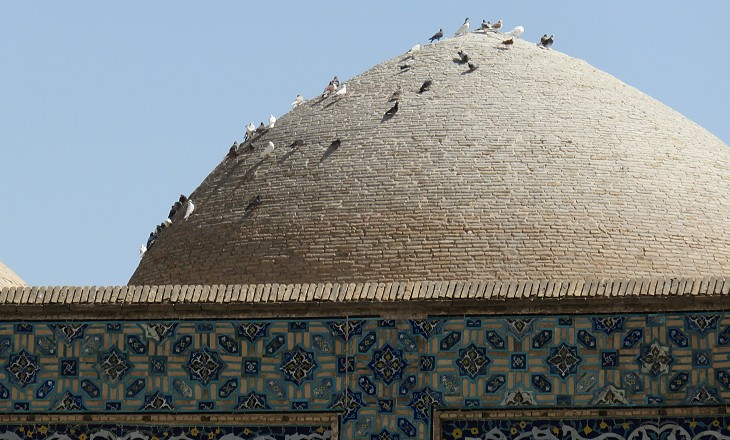 In 633 the Arabs invaded Mesopotamia and in 642 they occupied the Central Iran tableland. In 651 the last Sassanid king was killed while trying to flee the country. Islam was forced upon the Persians. Zoroastrianism, the ancient religion of the Persians survived only in the eastern province of Yazd. Arab control of the country weakened in the IXth century. The Abbasid Caliphs, based in Baghdad, were only nominal rulers of Persia which was divided into many local autonomous emirates. In the late Xth century a long period of invasions by Turkish-speaking tribes living in Central Asian began. The Seljuks established an empire over most of today's Turkey, Persia and parts of Mesopotamia and Syria. It soon split into separate sultanates, one of which, the Sultanate of Rum, is covered in another section of this website. The Great Seljuk Sultanate was based in Isfahan, where a large mosque was built by Sultan Malik Shah I and his vizier Nizam al-Mulk. 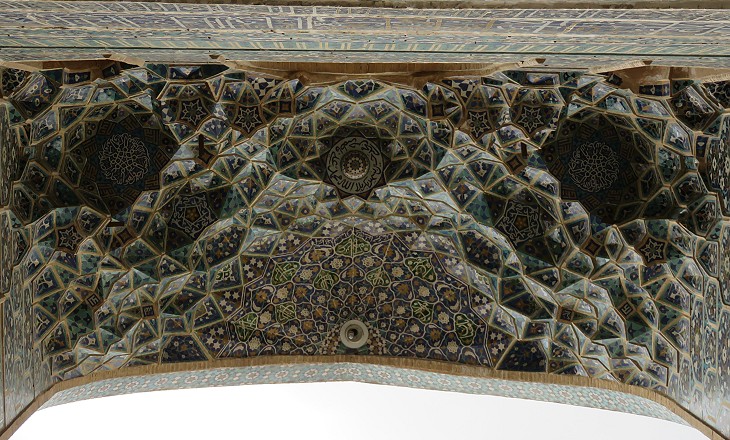 At the beginning of the XIIIth century Persia was invaded by the Mongols. Hulagu Khan, grandson of Gengis Khan, established an almost autonomous empire known as Ilkhanate over most of Persia. Yazd, similar to other locations along the Silk Road was a flourishing town when it was visited by Venetian merchant Marco Polo in 1272. The Ilkhanate eventually split into smaller states, one of which, ruled by the Muzaffarids briefly set its capital at Yazd. Towards the end of the XIVth century the whole of Persia was conquered by Timur who established a very vast empire having its centre at Samarkand, in today's Uzbekistan. 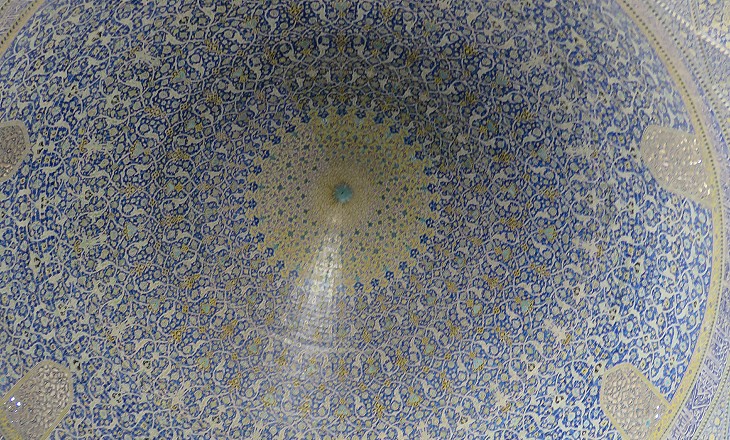 At the beginning of the XVIth century Shah Ismail, the young leader of a military brotherhood adhering to a branch of Shi'a Islam, managed to unify Persia. The dynasty he founded is known as Safavid, after Safi-ad-din Ardabil, a spiritual leader of the XIVth century. He imposed Shi'a Islam on all his subjects. It was a decision which had political implications and long lasting consequences as it led to a confrontation with the Ottoman Empire Sultans who professed Sunni Islam. The Ottoman army had a technological edge over the Safavid one because of the use of firearms. All along the XVIth century the Ottomans expanded their empire to the detriment of the Safavids. Eventually at the end of that century Shah Abbas re-organised the Safavid army and launched a series of campaigns which led to the temporary occupation of most of Mesopotamia. He moved the capital from Qazvin in the north to Isfahan and he embellished it with mosques, mausoleums, bazaars, palaces and gardens. 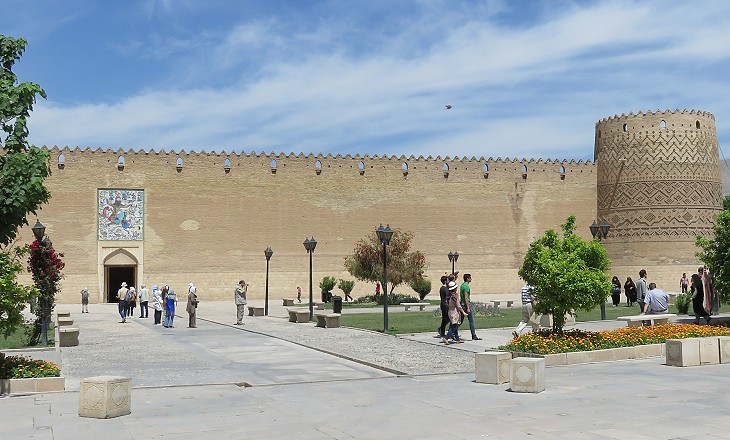 In the middle of the XVIIIth century Persia fell into anarchy with many governors of provinces establishing their own states. Karim Khan, leader of the Zand tribe, managed to control most of Central and Southern Iran. He established his capital at Shiraz which was embellished with a new bazaar and other buildings. Northern Iran was controlled by the Qajar tribe, who defeated the successors of Karim Khan and unified the country. In 1796 they moved the capital to Tehran, a village where they used to go hunting. 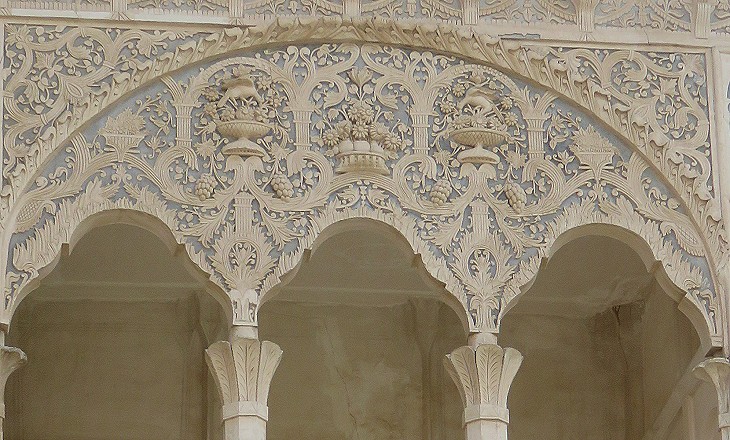 During the XIXth century the Russians conquered most of the Persian provinces along the Caspian Sea. The weak Qajar rulers were unable to stop the decline of the country. Misery was widespread while a small élite built luxury mansions with decorations showing European influences. The Qajars ruled Persia until 1925 when the last Shah was deposed. In 1935 the name of the country was changed to Iran to stress the ethnic Aryan origin of the Persian people. 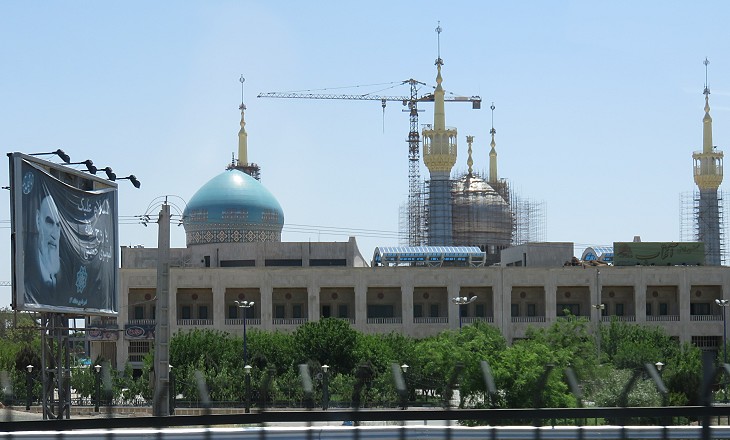 During the Qajar rule and more so in recent years many new mosques and other religious buildings were designed copying those of the Safavid period. Replicas of the domes of Shah Abbas and Sheikh Lotfollah mosques at Isfahan can be seen at many locations throughout the country.

The image used as background for this page shows a relief portraying Darius the Great on his throne at the National Museum of Tehran.