- Piglio and Acuto
(detail of a fresco at S. Onofrio)

Ferdinand Gregorovius, a German historian best known for his studies on medieval Rome, spent the summer of 1858 at Genazzano; from there he decided to visit the towns which are located at the foot of the Ernici Mountains: Ferentino, Alatri and Veroli, to see their ancient walls and medieval monuments. Gregorovius described this journey in Aus den Bergen der Herniker, an account written for a German paper. 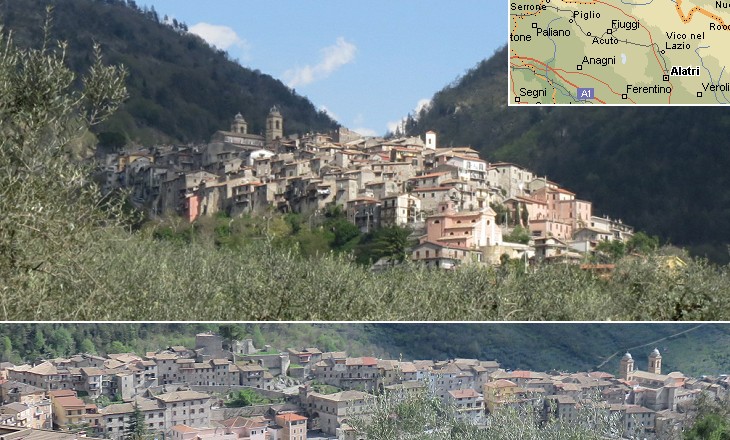 Views of Piglio: from the Genazzano-Fiuggi road (above) and from the road to Trevi (below); (inset) map showing the towns covered in this section

Many are the settlements lurking in the dark folds of those hills, or on their sunny heights (a reference to Monte Scalambra) (..). Who can paint this Latian landscape, when all its mountains glow in iridescent purple tints, and the wide valley below grows darker and darker, and night creeps slowly up (..) and then seems to wipe out, one by one, with her dark hand, all the little towns (Serrone, Rojate and Piglio) that had been shining there, till they are swallowed up in gloom?
Gregorovius - Aus der Campagna von Rom (About the Roman Campagna) translation by Dorothea Roberts. The German historian did not actually visit Piglio and Acuto. 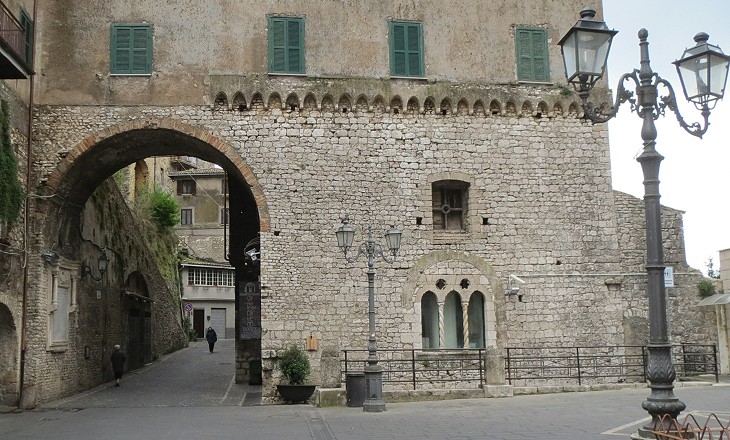 Piglio was first recorded in 1088 as a a possession of the Bishop of Anagni. During the XIVth century it was acquired by the Antiochia, a family who had fiefdoms in the valley of the River Aniene (e.g. Anticoli Corrado and Sambuci). In 1453 the Antiochia sold Piglio to the Colonna of Paliano, the most powerful family in southern Latium. Piglio was referred to as a castle and as a matter of fact its upper section was fortified and it included a demolished gate. 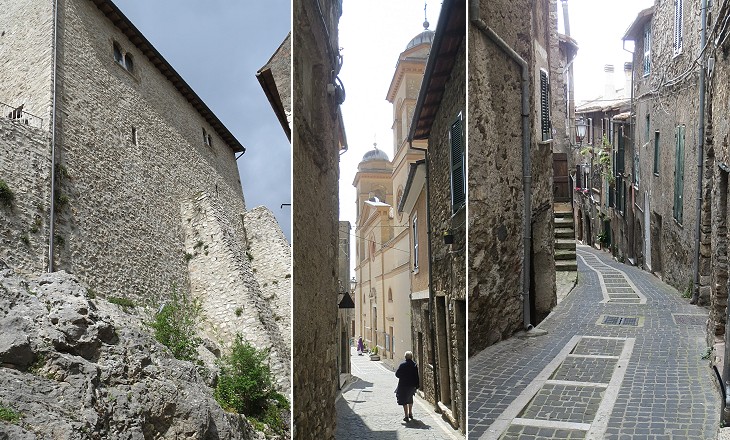 Piglio is situated on the very steep slope of a hill. The main street begins at the castle, of which only a few sections remain, and it crosses the whole town. It ends at Santuario della Madonna delle Rose, a church built in 1674 to celebrate the end of a pestilence which in 1656 halved the population of Piglio, similar to what occurred at Arsoli and other towns of the region. In Rome the end of that pestilence was celebrated by building S. Maria in Campitelli, in Vienna by erecting a column. 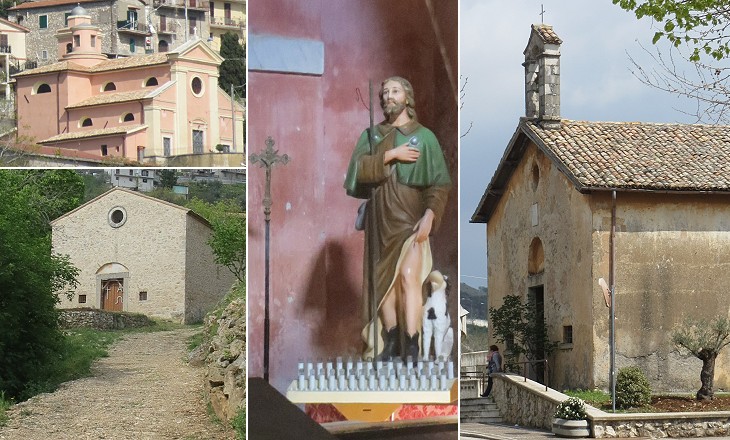 During the pestilence the dead were buried in a cemetery at the lower end of Piglio. Its small ancient chapel was renovated and dedicated to Roch, a saint who was specially invoked against the plague. In 1657 a church dedicated to St. Roch was built at nearby Acuto, but the dedication included St. Sebastian, another saint who was invoked against the plague. View of Anagni from Acuto

Hence (from Anagni) there is a grand view over the valley, but to Roman Catholics a more interesting feature will be the knot of brown buildings on the barren side of the mountain, about six miles above Anagni; for this is Acuto, where the recently founded but ever-increasing order of the Precious Blood had its origin, and where its foundress, Maria de Matthias, lived till her death in August, 1866. The story of her vocation is quite as romantic and curious as that of any old saintly legend; she founded here a large sisterhood and school which she supported by faith and prayer, without any definite sources of assistance (..). Of her extraordinary influence on the surrounding districts, no one who has visited them can have a doubt, or of the power of her sermons, which were simple discourses of loving practical Christianity (..). When she was likely to preach thousands flocked to hear her, and when she appeared, a silence fell upon the crowd, with the whisper, "Hush, the great mother is going to speak to us."
Augustus J. C. Hare - Days Near Rome - 1875 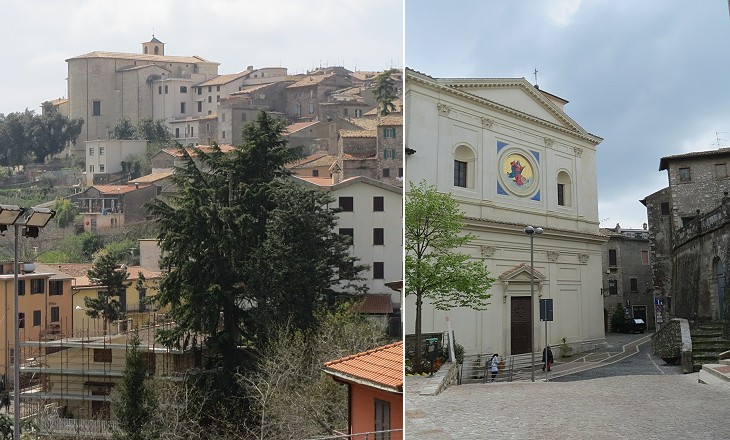 Acuto (sharp) owes its name to the shape of the mountain upon which it stands when seen from Anagni. It was first mentioned among the possessions of the Abbey of Subiaco, but its history is closely associated with that of Anagni because in the XIIth century it became a fiefdom of the Bishop of that town, a condition which did not change until the XIXth century. Even today a new Bishop of Anagni receives the (honorific) title of Signore di Acuto (Lord of Acuto) during the ceremony which follows his appointment. 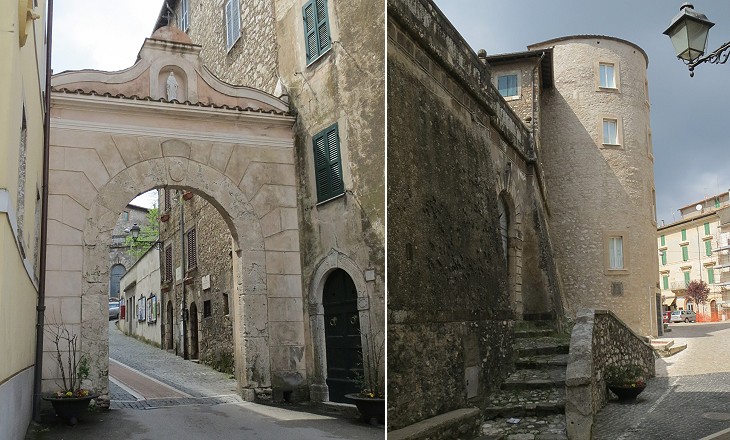 Acuto was surrounded by walls which were strengthened by some towers and a small castle. Overall the old fortifications are clearly noticeable, although they lost their military purpose. The old town retains some picturesque corners. 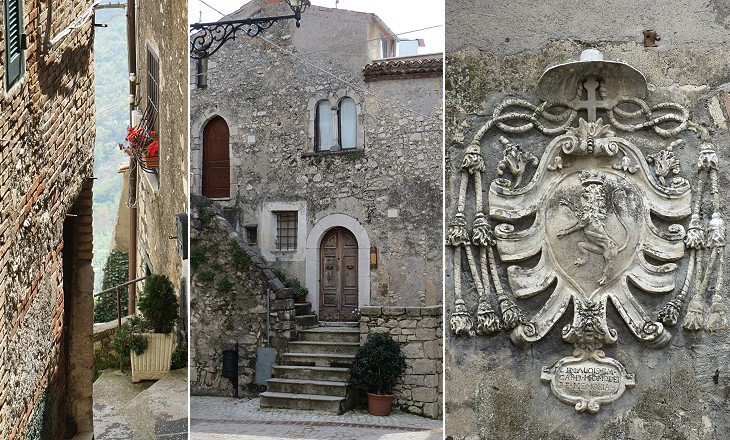 The image used as background for this page is taken from an advertisement of Vino Cesanese del Piglio, a wine which is made in the countryside of Piglio.