The ruins of the antient Seleucia, now called Selefkeh though nine miles distant were conspicuous from the ship (..). The remains of Seleucia are scattered over a large extent of ground, on the west side of the river Calycadnus.
Francis Beaufort, Captain of HMS Frederikssteen, a frigate of 32 guns: Karamania; or a brief description of the South Coast of Asia Minor, and of the Remains of Antiquity collected during a survey of that coast, under the orders of the Lords Commissioners of the Admiralty, in the years 1811 & 1812 - Published in 1817 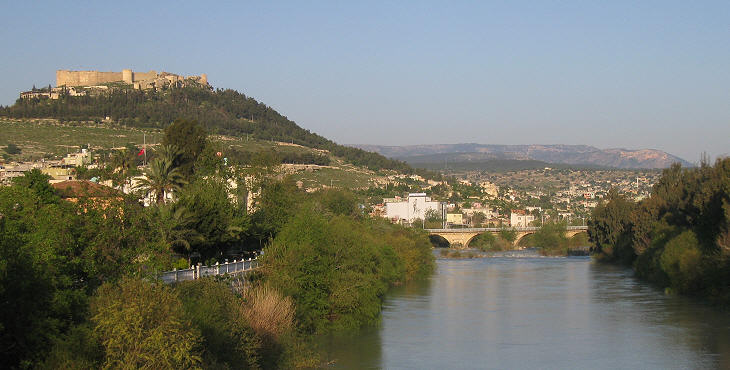 Our next move was to Seleucia or Selefkeh. We landed as near as we could to the end of the line of hills on which it stands, and then walked to it, nine miles across the plain at the foot of them. The ancient town is beautifully placed at the side of a river, the Calicadnus.
Travels in southern Europe and the Levant, 1810-1817. The journal of Charles Robert Cockerell
Seleucia ad Calicadnus, today's Silifke, was founded by Seleucus, a general of Alexander the Great, who, after the death of his commander, ruled over most of Anatolia and Syria. At that time the Calicadnus, the river near the town was navigable.
Similar to many other ancient towns, Seleucia was made up of an upper town on a fortified hill (acropolis) and of a lower town along the river with markets and warehouses.
The Romans, who conquered the region in the IInd century BC, built a bridge across the Calicadnus; its foundations can still be noticed in the current bridge. (above) Silifke Kalesi; (below) view over the Calicadnus from the fortress

The Calicadnus, although it is on an even bed, is a noble river, wide and rapid, and gives great beauty to the scene. It is unhealthy to drink, which accounts for the existence of a great reservoir. Cockerell
The valley of the Calicadnus was important because it allowed communication between the Anatolian tableland and the Mediterranean coast; the upper valley was controlled by a fortress in Mut (ancient Claudiopolis), whereas the lower valley was controlled by the fortress of Silifke.
During the Third Crusade, German Emperor Frederick I, Barbarossa led a large army trough the Anatolian tableland, where he sacked Iconium (Konya), before moving towards the coast via the Calicadnus valley. On June 10, 1190, at the age of 67, he drowned while crossing the river. 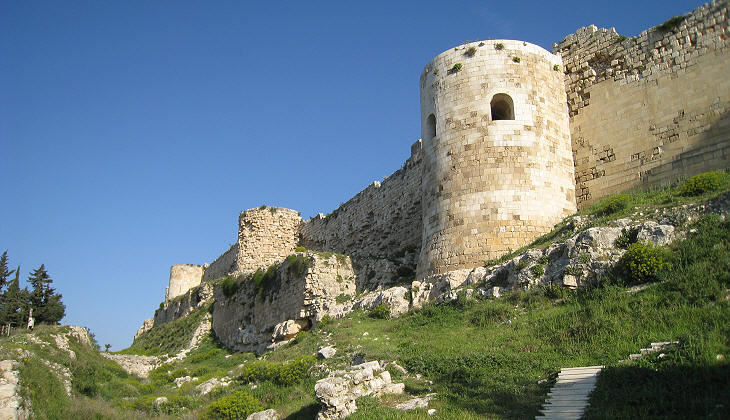 Western walls of the fortress

On a hill, west of the town, are the remains of the citadel, of an oval form, surrounded by a double ditch, and a well built wall with numerous towers: the interior is full of ruined houses, among which are many fragments of columns. F. Beaufort
The fortress which we see today is mainly a Byzantine/Armenian fortress, with only minor additions made by the Ottomans. 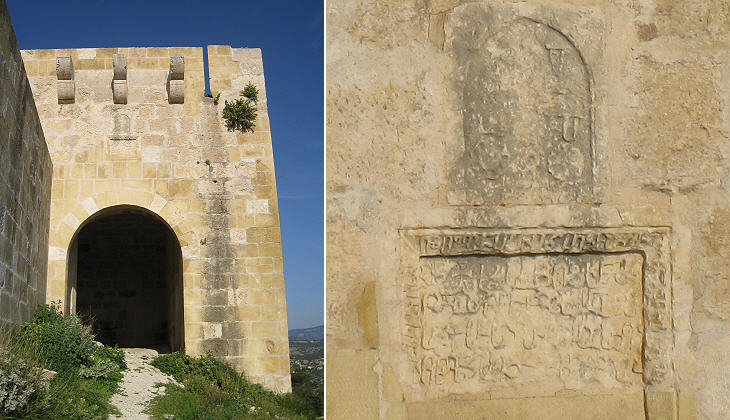 It is partly on the plain and partly on steps of rock which rise gradually from it up to a large castle of late date, which has an Armenian inscription over the gate. Cockerell
In the late XIIth century Armenian noblemen established a feudal kingdom in Cilicia, a territory which nominally belonged to the Byzantine emperors; by taking advantage of the Crusades, the Armenians managed to control most of the coast between Cilicia and Pamphylia, including Silifke; their kingdom is known Kingdom of Lesser Armenia. 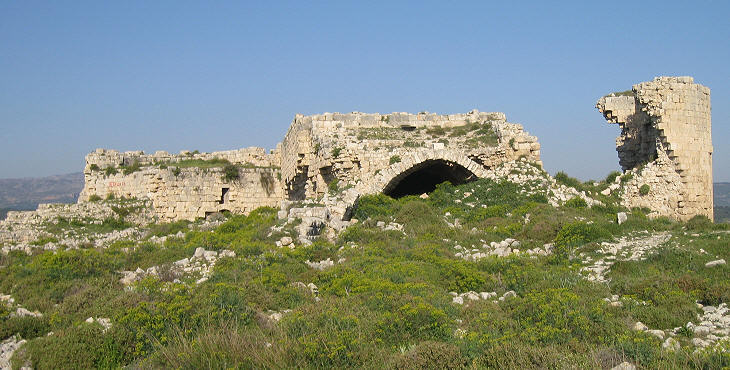 Building at the northern side of the fortress

The Kingdom of Lesser Armenia was a loose alliance of local rulers of Armenian descent; they lived in a series of vaulted rooms and halls in the most protected parts of their castles; buildings similar to those at Silifke can be seen at Lampron Castle. Near the catacombs there is an enormous reservoir, hewn out of soft stone; the roof is supported on parallel rows of square pillars and the sides and bottom are covered with very hard stucco, or terras. Its dimensions are 150 feet by 75, and 35 in depth. Beaufort
Byzantine Seleucia had a water supply system based on a large cistern at the foot of the acropolis. Pipes led the water to fountains in the lower town. 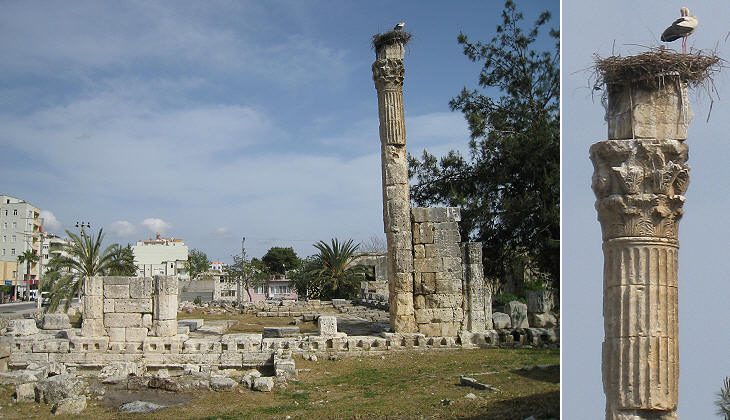 Temple to Zeus; the capital of the column is shown also in the image used as background for this page

(There is) a temple which had been converted into a Christian Church, and several large Corinthian columns, about four feet in diameter, a few of which are still standing. Beaufort
Ancient Seleucia had several temples, but only one of them is left and only one column is not broken. The temple was dedicated to Zeus, but today it is commonly referred to as the Temple of the Storks. You may wish to see other ancient columns in Turkey which were chosen by storks, e.g. at Ankara and Milas. 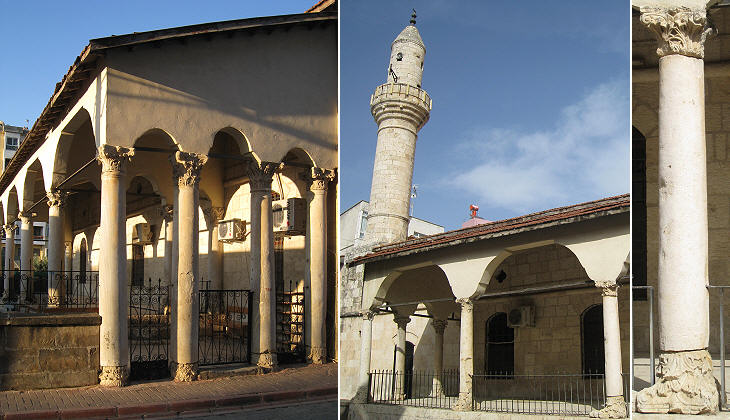 Ancient columns and capitals were used in 1328 for the construction of a mosque; at that time Silifke was ruled by the Emirs of Laranda (Karaman). 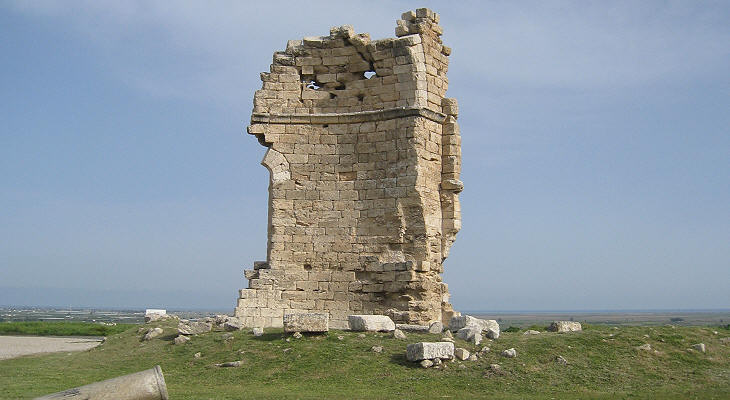 Aya Thecla: apse of the basilica

According to an apocryphal tradition, Thecla was a virgin who was converted by St. Paul the Apostle; she escaped being killed by hiding in a cave which after her death was turned into a shrine. It is generally thought that Byzantine Emperor Zeno, who was born in the mountains north of Silifke, built in the late Vth century a large basilica above the cave. She is also worshipped at Maaloula in Syria and Tarragona in Spain. 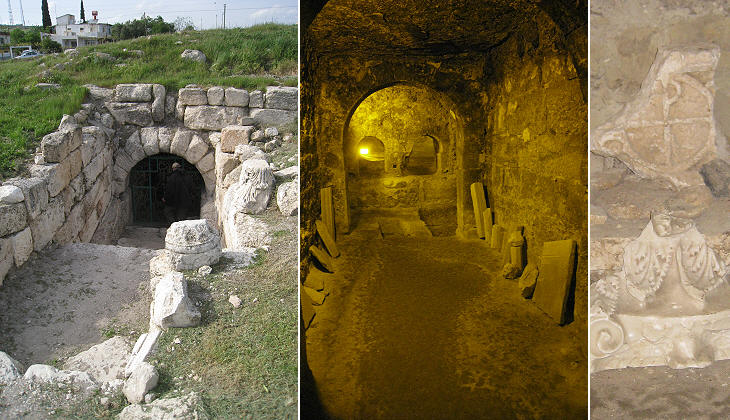