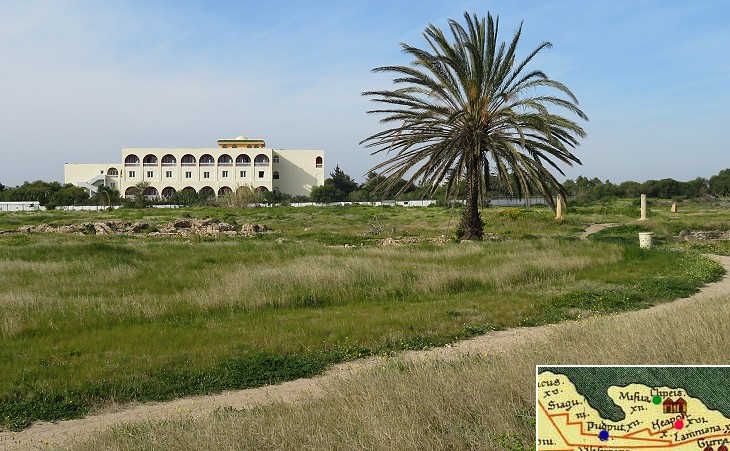 Archaeological site of Pupput between large holiday resorts; (inset) section of "Tabula Peutingeriana", a Vth century map of the roads of the Roman Empire; the blue dot indicates Pupput (spelt as Pudput); the red dot indicates Neapolis and the green dot Clypea

At 11 a.m. we reached Souk-el-Abyad. This "henchir" (site with ruins) covers a large area and it slopes down towards the sea. The large stones must have been moved to Hammamet as construction material, but fragments of pottery and minor stones can still be noticed. (..) It is still be possible to identify the site of an amphitheatre and of five or six cisterns. I guess the "henchir" might be identified with the town of Pupput, 12 miles south of Neapolis.
Free translation from Victor Guérin - Voyage archéologique dans la Régence de Tunis - 1862 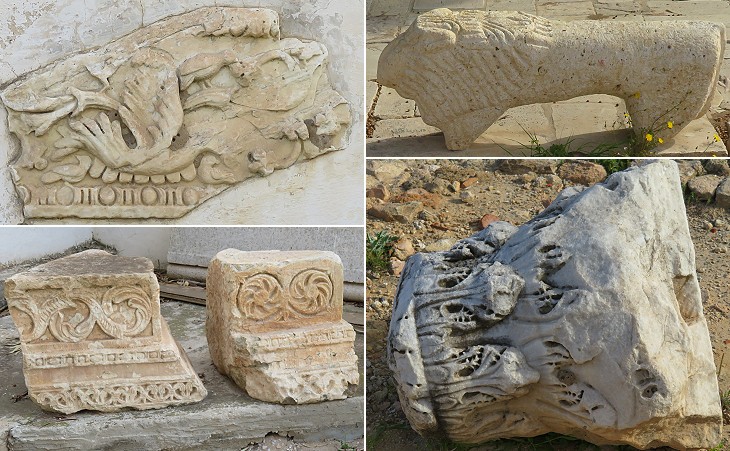 Reliefs, statues and decorative elements near the house of the warden

France established a Protectorate over Tunisia in 1881 and the detailed account of several journeys in the country by Victor Guérin was an excellent guide for French authorities to look for ancient works of art. The task was assigned to the army. This was done also at Souk-el-Abyad and it appears that some objects were moved to the Bardo Museum in Tunis. Eventually inscriptions were found which confirmed Guérin's guess about the name of the Roman town. They made referemce to Colonia Aurelia Commoda Pia Felix Augusta Pupput indicating that the town had achieved the status of colonia at the time of Emperor Commodus. 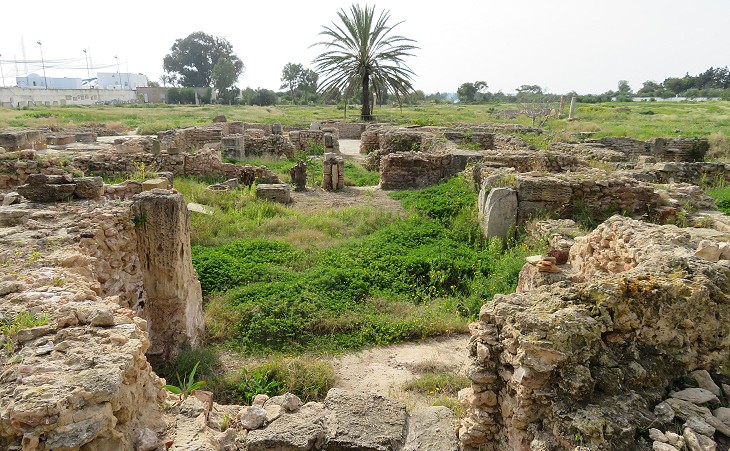 The site of Pupput however was not deemed important enough to be protected and the presence of Roman ruins was almost forgotten. In the 1960s a large financial effort was made to turn the small town of Hammamet, two miles north, into a major seaside resort. This led to the development of Yasmine (Jasmine) Hammamet, a string of big hotels along the beach. Tunisian authorities in charge of the protection of Art and Antiquities managed to stop building activities in an area where initial excavations had unearthed four Roman houses and two bath establishments. This is today's Site Archéologique de Pupput. 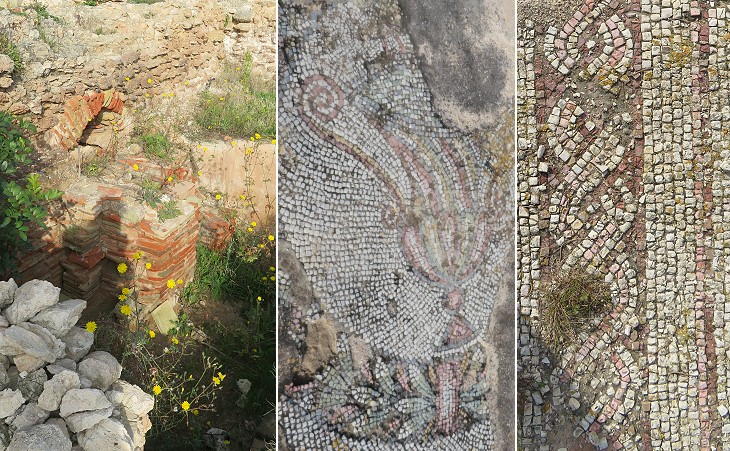 Large Baths: (left) "hypocaust", underfloor heating system; (centre/right) details of the floor mosaics (IVth century AD); another one can be seen in the image used as background for this page

The shoreline of Pupput is a flat sandy beach which is unlikely to have provided the town with a natural harbour. The economy of Pupput relied on the town being at or near the crossroads between the road from Clypea at the tip of the Cape Bon peninsula to Thuburbo Majus and that from Carthage to Hadrumetum (Sousse). The importance of the latter road is testified to by the fact that after Diocletian's administrative reform Hadrumetum became the capital of Valeria Byzacena, a province which included Central and Southern Tunisia. 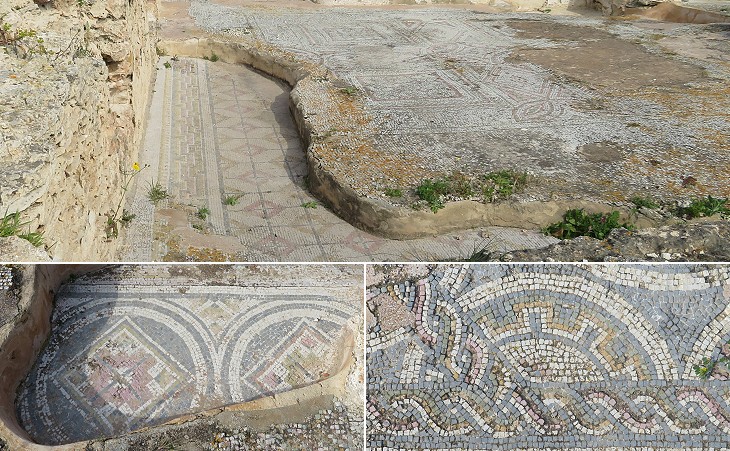 The effectiveness of the Roman construction techniques is shown by the excellent condition in which archaeologists found a floor mosaic which was replaced by another one in a hall of a small bath establishment at the centre of the archaeological area. House of the Black and White Triclinium: peristyle

The climate of Pupput is not very different from that of Pompeii and its finest houses, similar to those of that town were structured around a peristyle, a central courtyard with columns which in this and other houses had a viridarium, a small garden. 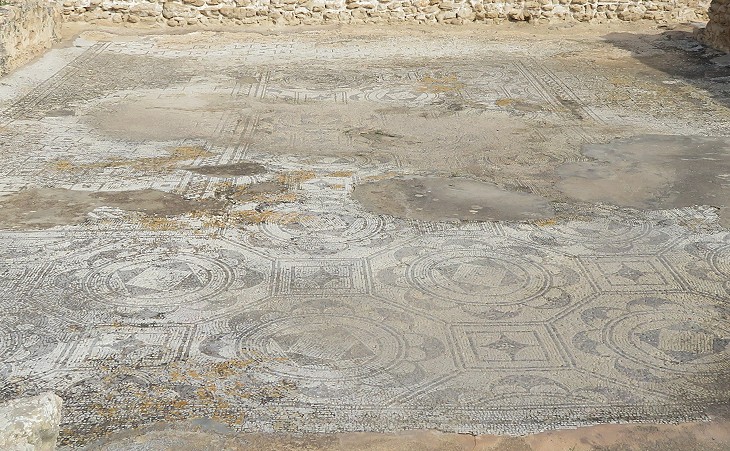 The Black and White Triclinium

Triclinium was the formal dining room of a rich Roman house. The name means three couches because the diners ate their meals reclining on couches or cushions placed on three sides of the room. Usually archaeologists use this name for a large well decorated room in the public part of the building, but they are not always sure about its actual use. In this house they had no difficulties in identifying the triclinium because a large room was decorated with a black and white floor mosaic with two different geometric patterns, one of which (slightly darker) had the shape of an inverted "U"; it highlighted the position of the couches for the landlord and his guests. The central part of the room had an elaborate slightly lighter decoration based on octagons surrounding a circle decorated with peltas. A similar use of two different patterns can be noticed in another triclinium at the Museum of Sousse. 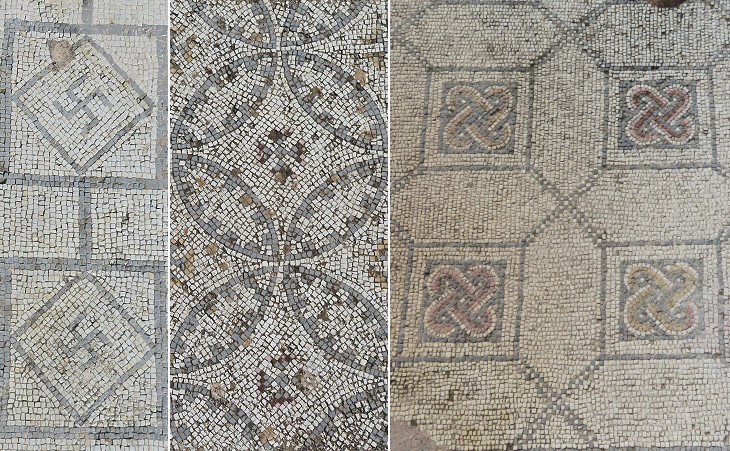 House of the Black and White Triclinium: other floor mosaic patterns

Other rooms near the triclinium were decorated with swastikas and Solomon's knots, most likely at the same time as the triclinium. The use of mainly black and white floor mosaics was in fashion in Rome, e.g. at Villa di Livia and Villa Adriana, but less so in the provinces. These mosaics are dated late IInd or early IIIrd century AD. 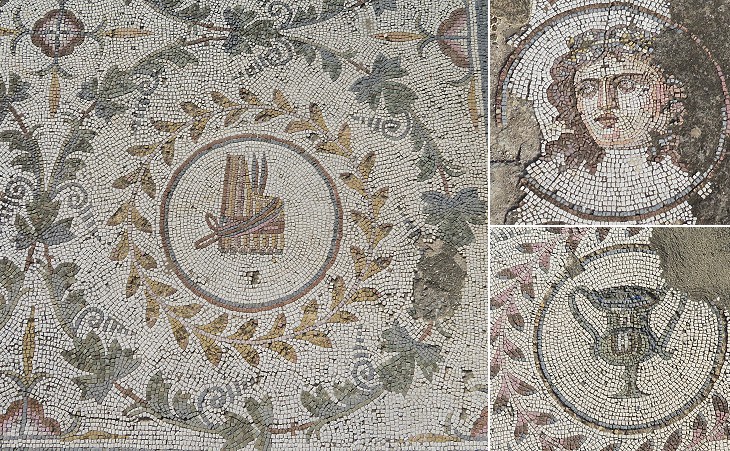 House of the Black and White Triclinium: floor mosaic with references to Dionysus/Bacchus

A part of the house was redesigned towards the middle of the IIIrd century and a medium size room was decorated with an elegant floor mosaic based on stylized grapevine medallions surrounding symbols of Bacchus/Dionysus, including a mask. Judging on the subject of the mosaic also this room could have been a triclinium, although for a more intimate dinner. 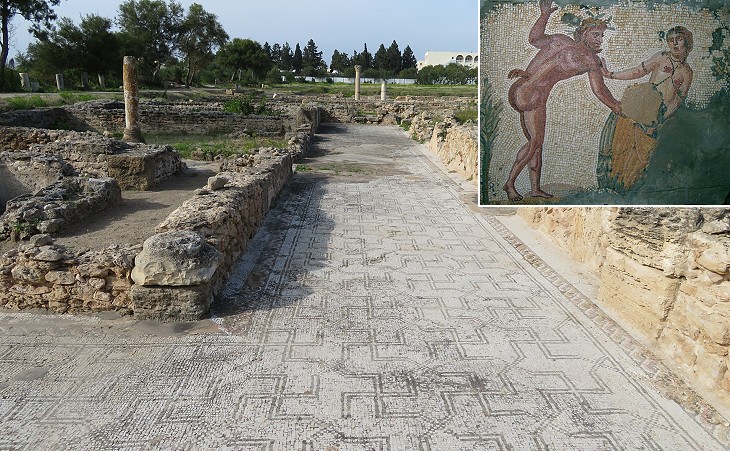 House of the Satyr and the Nymph: long corridor; (inset) mosaic after which the house is named (it was removed from its original location and its subject is similar to that of another mosaic at the Museum of Sousse)

Swastikas or meanders or Greek key patterns were a popular decorative motif because they could be combined to produce different optical effects. At Villa dei Volusii near Rome they were employed in many floor mosaics which greatly resemble that in this house. The corridor divided the house into two sections: one residential with a small room, perhaps a cubiculum (sleeping room) with the mosaic of the Satyr and the Nymph, and another one with a cistern (it perhaps housed a workshop). 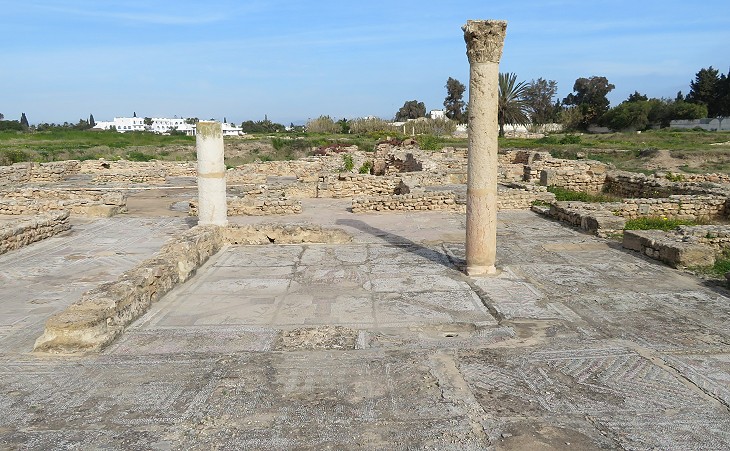 House of the "Figured Peristyle": the peristyle after which the house is named

This house which had also small private baths is structured around a large peristyle which was decorated with an unusual floor mosaic; it depicts a stylized viridarium surrounded by eight columns supporting a square structure with a lighthouse at its centre. The mosaic presents the same view from all sides, but the lighthouse was meant to be seen from the entrance to the house. 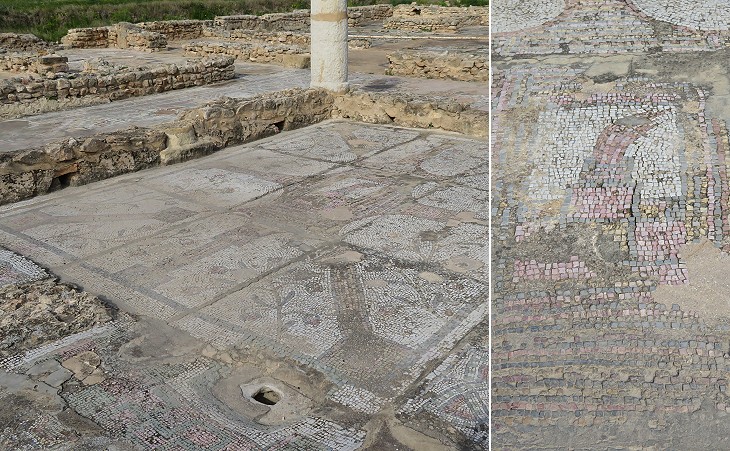 House of the "Figured Peristyle": (left) the peristyle floor mosaic; (right) its centre which depicts a lighthouse

The lighthouse was perhaps that of nearby Neapolis. In itself it was a symbol of the flourishing trade between the ports of Northern Africa and Porto, the artificial harbour of Rome. A lighthouse can be seen in the floor mosaic of the shipping agency at Ostia of Sullectum, a port in Central Tunisia. 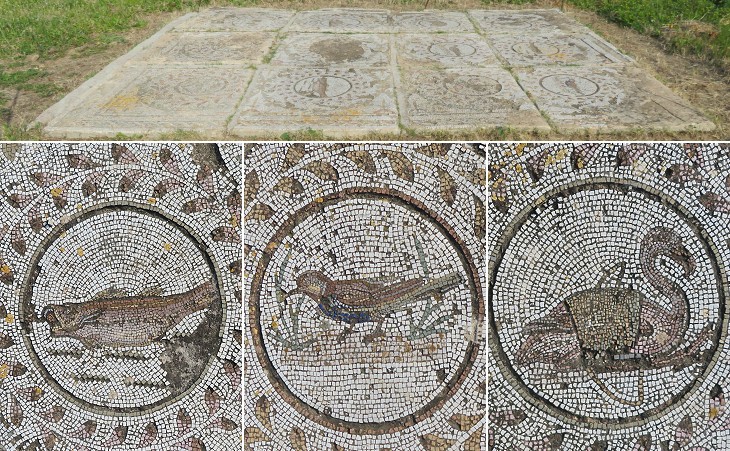 Detached floor mosaic with fish and birds; flamingo tongues were regarded as a delicacy by the Romans (*); overall the mosaic could be associated with those depicting "xenia", food or gifts which were offered to guests

This fine floor mosaic is not part of one of the houses in the archaeological site. Its finely framed twelve round medallions depict fish, birds, fruit and wild animals. Similar to the other floor mosaics at Pupput it would need to be protected, at least sheltered from rain and sun.
(*) Apicius, that very deepest whirlpool of all our epicures, has informed us that the tongue of the phoenicopterus is of the most exquisite flavour.
Pliny the Elder - The Natural History - Book X - Translation by John Bostock and H.T. Riley 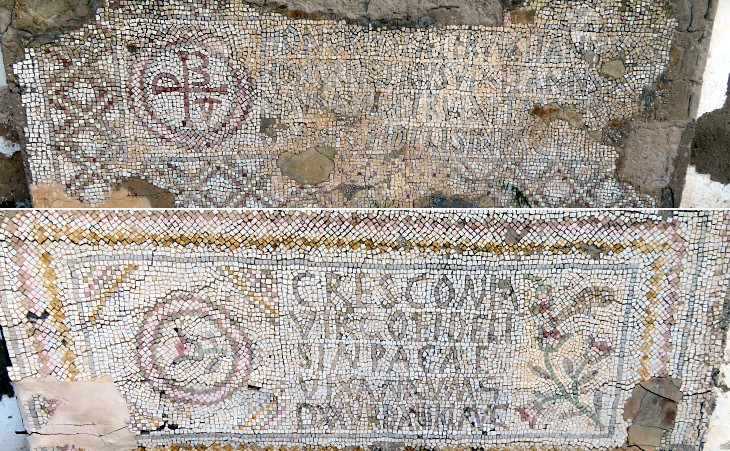 A necropolis was discovered in 1994 in the proximity of the houses, but inside the property of a large hotel. Some of the funerary mosaic inscriptions have been moved to the archaeological site. This type of mosaics is very well represented in Tunisia (see those found at Uppenna, south of Pupput) and also in Spain; in many cases they were decorated with portraits of the dead or Christian symbols (see examples at the Bardo Museum and at Tarragona).