Prompted by Roman Wanderings
(lions in Florence and Rome)

I grew up in Florence and from time to time I spend a few days there, mainly to see my relatives. In December 2002 during a short walk in the historical center of Florence I arrived in Piazza della Signoria and there I saw a familiar face. I had already seen that marble lion watching the access to Loggia della Signoria! Its almost human face overcame my fears (I never talk to lions, but I sometimes talk to statues) and after having introduced myself I asked where and when we might have met before. The lion did not remember having seen me before (when I left Florence in 1966 my appearance was quite different) and we were somewhat stuck when the lion, after having heard about my Roman wanderings, said to me with a smile: "Maybe you saw my twin standing in the loggia of Villa Medici! I had been there since I was sculpted by Flaminio Vacca in 1600 to match an ancient Roman lion. In 1780 Grand Duke Leopold I of Tuscany decided to move most of the statues to Florence and I was replaced by a copy." 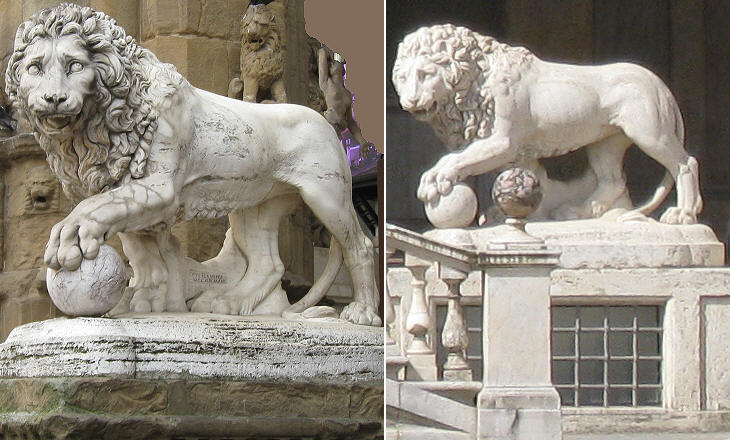 The lion was not the only recollection I had during that walk, because of the close relationships between Florence and Rome during the Renaissance and the Baroque periods. In Loggia della Signoria there is a Roman copy of a Greek statue portraying Menelaus with the body of Patroclus: it was found in Rome and brought to Florence where it was amply restored. A copy in much worse conditions is still in Rome: it is Pasquino!

Leon Battista Alberti was not only one of the main architects of the XVth century, he was also the developer of new architectural theories, based on the study of both the Roman ruins and the Roman texts, mainly De Architectura a Ist century BC treatise by Vitruvius. In 1456 he designed the portal and the upper part of the façade of S. Maria Novella and he created a pattern which was followed by many other architects. The façade of S. Agostino in Rome has many points in common with that of S. Maria Novella. The design of the portal was based on a very careful study of the Roman arches, chiefly of the Arco di Settimio Severo. 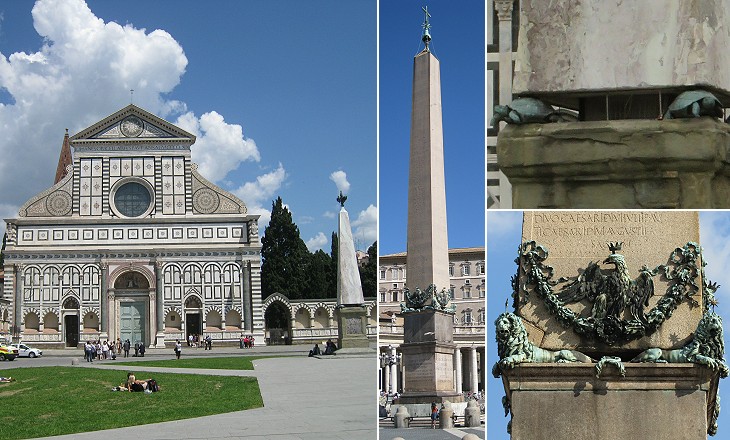 In 1586, Pope Sixtus V re-erected in Piazza S. Pietro a tall obelisk, which once stood in the Circus of Nero. In the next few years several other obelisks were relocated by Sixtus V to mark the terminal points of the streets he opened. Florence did not have any ancient obelisks to repair and re-erect, but the novelty introduced by Sixtus V in the design of large squares convinced the grand dukes to build in 1608 two "modern" obelisks in the large square of S. Maria Novella, where chariot races were held in the XVIth and the XVIIth centuries. The obelisk of Piazza S. Pietro is supported by four lions, which are a heraldic symbol of Sixtus V. The obelisks of Piazza di S. Maria Novella are supported by four tortoises, which are a heraldic symbol of Cosimo I, the first Grand Duke of Tuscany. 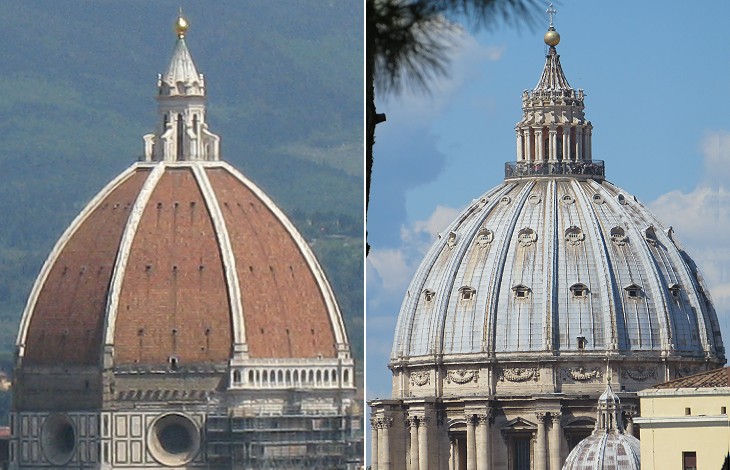 The Domes of S. Maria del Fiore and of S. Pietro in Vaticano

A thorough analysis of the similarities and of the differences between the domes of S. Maria del Fiore and S. Pietro in Vaticano would require a lengthy essay. It is known that Pope Eugenius IV spent most of his pontificate in Florence and he attended there to the solemn ceremonies for the completion of the dome of the Cathedral, which were held on March 25, 1436, the first day of the calendar in use in Florence until 1750. He was impressed by both the size and the beauty of the dome designed by Filippo Brunelleschi. The Cathedral of Florence (S. Maria del Fiore) was by far larger than S. Pietro, its exterior was richly decorated with marble and the modern and daring design of its dome called for admiration. This forced the popes to consider an enlargement of S. Pietro and in the early XVIth century its replacement by a new cathedral, S. Pietro Nuovo. 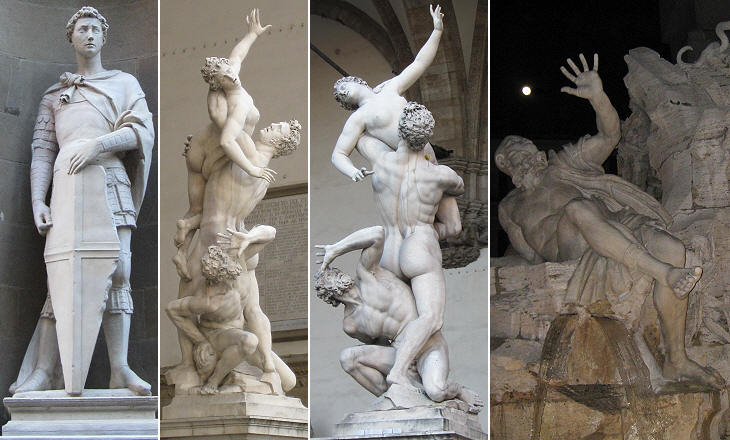 St. George (1416) by Donatello, Rape of the Sabine Women (1583) by Giambologna, Rio de la Plata (1648) in Piazza Navona by Francesco Baratta (in the moonlight) based on a model by Gian Lorenzo Bernini

A statue is a three-dimensional object and as such it can be seen from several points of views. The subject of the large majority of the statues, both in the Greek and Roman world and in the early Renaissance, was a single human body, which has a preferred, obvious point of view. In addition statues were usually located in niches in the walls of temples and churches, thus allowing only a frontal view (e.g. St. George in a niche of Orsanmichele in Florence). These statues therefore have an optimal point of view and they lose interest by being studied from a different angle. In the early XVIth century a) the discovery of some ancient statues (chiefly the group of Laocoon in 1506) which were designed for being watched from different angles, b) the location of statues out of the walls and niches of buildings (the David by Michelangelo was located in 1503 at the entrance of Palazzo Vecchio, but a few steps away from its walls), c) the vindication by Michelangelo of the superiority of sculpture over painting, led to the development of new theories about the requirements of a sculpture. In the second half of the XVIth century Benvenuto Cellini stated that a sculpture had to be viewed from eight different angles and therefore his 1553 Perseus has some interesting details, which can only be seen from behind. The perfect answer to the theories of Cellini was given by il Giambologna (Jean de Boulogne) in 1583. His Rape of the Sabine Women definitely invites the viewer to walk around the statue. I did the same and at one point the hand of the young woman reminded me of the hand of Rio de la Plata. The gigantic statue of Neptune by Bartolomeo Ammannati in Piazza della Signoria is still overshadowed by the nearby David by Michelangelo. The fountain was built in 1563-1575 deserves however to be paid attention to for other reasons. First of all its size was unusual and it prompted Rome to build several large fountains in the next decades (see a list of them), secondly it inspired many other fountains dedicated to Neptune and the sea. In the fountain by Ammannati the water springs from shells held by three (somewhat obscene) tritons located between the legs of Neptune. Both Bernini and Pope Urban VIII Barberini were of Florentine origin and this maybe explains why they chose a triton holding a shell for the fountain embellishing Piazza Barberini.

An obvious recollection prompted by the fountain in Florence is Fontana di Trevi, where however the same subject was developed in a very different way. The chariot of Neptune in Florence has decorated wheels and they reminded me of another chariot of Neptune I saw in Madrid. Fuente de Neptuno was designed in 1780 by Ventura Rodriguez at the request of King Charles III, a very Italian king, because before becoming King of Spain in 1759, he had ruled over Parma (1732) and Naples (1735). In commissioning a fountain of Neptune he was most likely influenced by the fountains he had seen in Italy.

The image used as background for this page shows the heraldic lily which is the symbol of Florence.