Abbazia di Farfa
(detail of a mural painting in Montopoli) 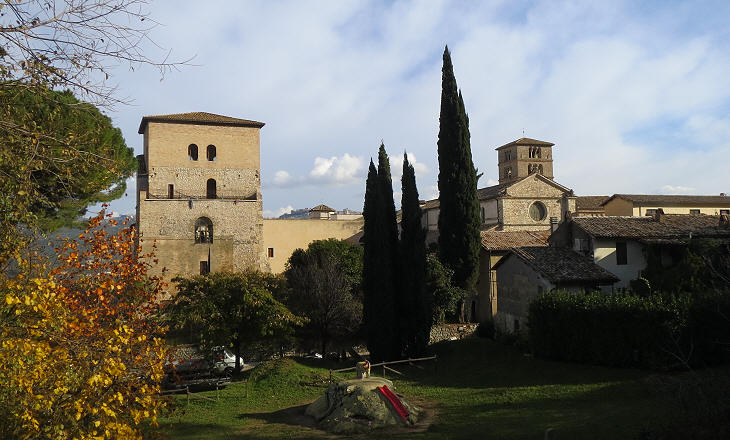 View of the tower/palace of the abbots (left) and of S. Maria di Farfa (right)

The abbey is situated in a small valley crossed by the Farfa, a stream which empties into the nearby River Tiber and was navigable by small boats. Unlike Sacro Speco at Subiaco and other medieval monasteries which were built in hardly accessible sites, the abbey enjoyed a location which favoured its development as a trade centre, which became widely known for its two yearly fairs. The abbey was founded in 680 by Thomas of Maurienne, a Benedictine monk. According to tradition he had a vision of the Virgin Mary in the Church of the Holy Sepulchre at Jerusalem. He was told to found a new church in Italy on the site of one which was in ruins near three cypresses. The abbey was founded in a location where archaeologists have discovered evidence of an ancient temple and of a Roman villa in addition to a Vth century church. 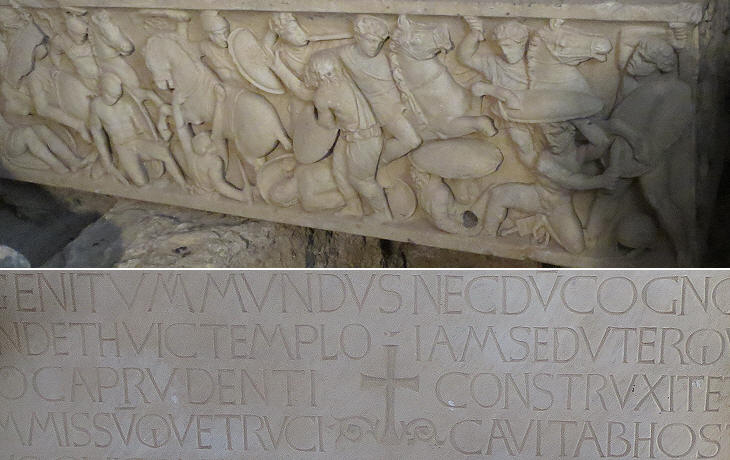 (above) Sarcophagus found in the crypt of the Carolingian church; (below) part of the gravestone of Abbot Sicardo (d. 841)

Thomas of Maurienne could choose such a poorly defensible location because he was supported by the Longobard Duke of Spoleto. The abbey was endowed with a series of nearby fiefdoms so that it became a sort of buffer state between the Duchy of Spoleto and Patrimonium Petri, the first territory formally ruled by the Popes. The end of Longobard power in Italy did not affect the prestige of the abbey which enjoyed the personal patronage of Charlemagne. During this period S. Maria di Farfa, the church of the abbey, was completed and embellished. The high quality of the burial inscription of Abbot Sicardo indicates that the abbey was an important cultural centre, the site of a scriptorium (writing place) where manuscripts were copied. 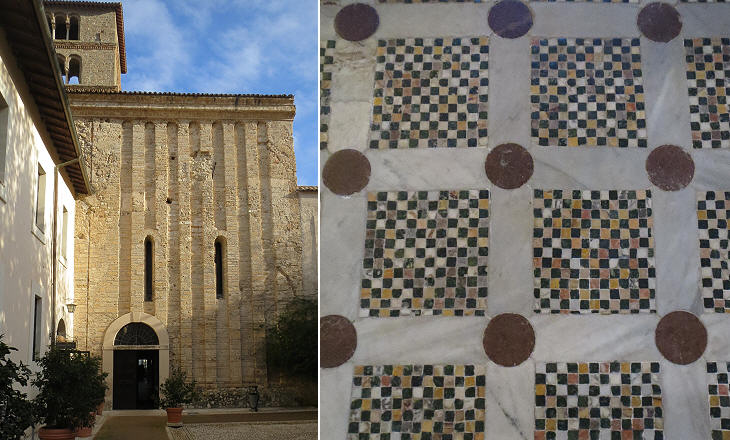 In 831 the Emirs of Tunis conquered Palermo in Sicily and from there they launched raids on the coasts of the Italian peninsula, where their troops were known as Saracens. In 846 they raided the outskirts of Rome and in the following years they were able to reach the inner regions of the peninsula. Farfa was repeatedly attacked and eventually in 897 the monks decided to leave the abbey. The Saracens installed themselves at Farfa from where they were dislodged only many years later. The monks returned to Farfa, but at the end of the XIth century they decided to abandon it again to relocate their abbey at the top of Monte Aguzziano, a nearby isolated hill (It. aguzzo means pointed). The project however was never completed. 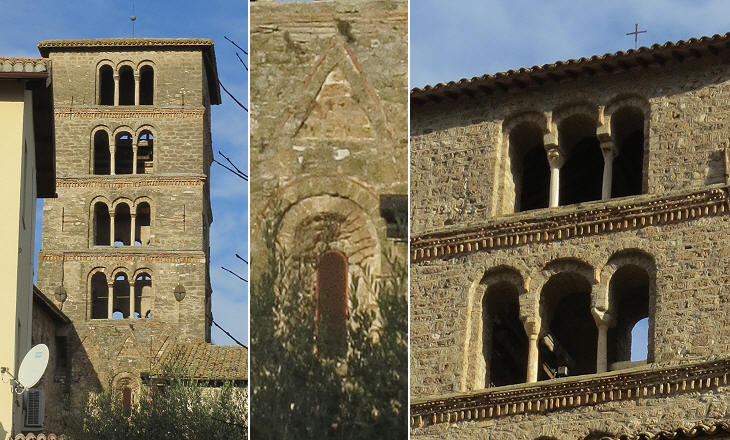 The Carolingian church had an orientation which was different from that of the current one which was built in 1492-1496. It was characterized by two tall bell towers. Parts of one of them can still be seen in the base of a Romanesque bell tower. The symbol of the abbey is a church with two bell towers as you can see in the image used as background for this page (a 1578 relief).
The Abbots of Farfa sided with the German emperors in the Investiture Controversy, but in 1122, at the Concordat of Worms, Emperor Henry V acknowledged the right of Pope Calixtus II to appoint the abbots of Farfa. This led to the decline of the abbey which had to transfer a substantial part of its revenues to the Papal Treasury. 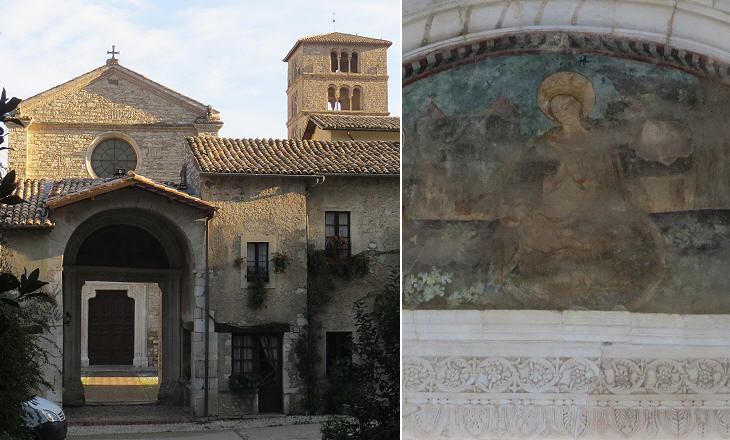 (left) Gate leading to the abbey; (right) its fresco and marble decoration showing roses, the heraldic symbol of the Orsini

In 1421 Pope Martin V assigned the abbey and its many properties in commendam (commandry) to the Orsini, who had many fiefdoms near Farfa such as Vicovaro and Morlupo. They retained control of the abbey for more than a century and they gave it most of its current appearance, chiefly owing to Cardinal Giovanni Battista Orsini, who was appointed abbot in 1482. 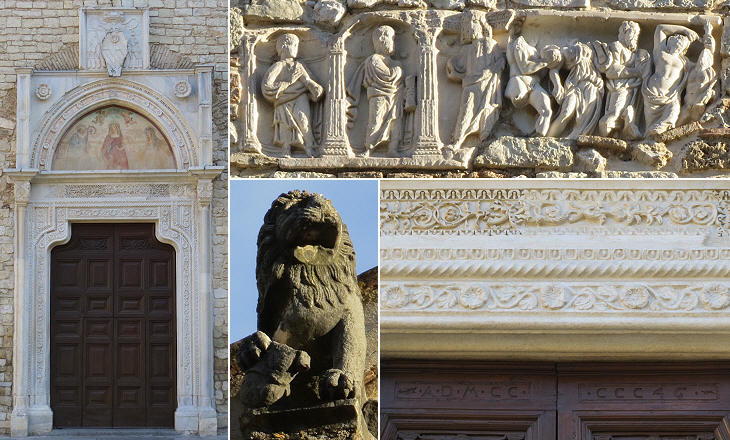 Details of the façade: (left) portal with the coat of arms of Cardinal Giovanni Battista Orsini; (right-above) fragments of two ancient sarcophagi: that to the left is Early Christian; that to the right pagan; (right-below) a lion which stood at the entrance of the medieval church and was eventually relocated to the top of the façade and detail of the portal and of the 1546 wooden door

In 1492 Cardinal Orsini favoured the election of Cardinal Rodrigo Borgia (Pope Alexander VI) and he was rewarded with several benefits and the town of Soriano, a historical fiefdom of the Orsini which they had lost. Cardinal Orsini was therefore in a position to finance the construction of the new church. We do not know the name of its architect, who, in line with the fashion of the time, did not hesitate to place a pagan relief depicting a Dionysiac procession on the façade. 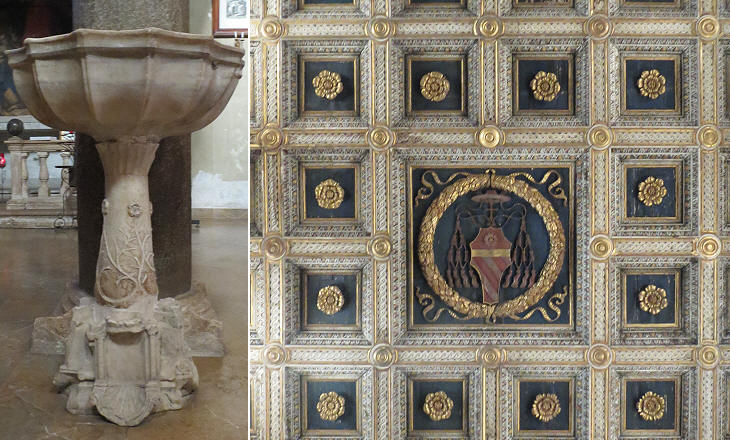 Interior: (left) Renaissance stoup decorated with the Orsini roses; (right) wooden ceiling with the coat of arms of Cardinal Giovanni Battista Orsini (see a page on the ceilings of the Roman churches)

Cardinal Orsini was for many years a trusted adviser to the Pope, but eventually he was suspected of plotting against his son Cesare Borgia. In January 1503 Pope Alexander summoned Cardinal Orsini to Rome and he imprisoned him in Castel Sant'Angelo. Cardinal Orsini's mother begged (and paid) the Pope to be allowed to look after his meals, but a few days later Cardinal Orsini died. According to widespread rumours he had drunk poisoned wine from a chalice personally offered to him by the Pope. All the properties of the Orsini, including the commandry of Farfa, were confiscated, but they were returned to them a few months later, because Pope Alexander VI died under mysterious circumstances in August. 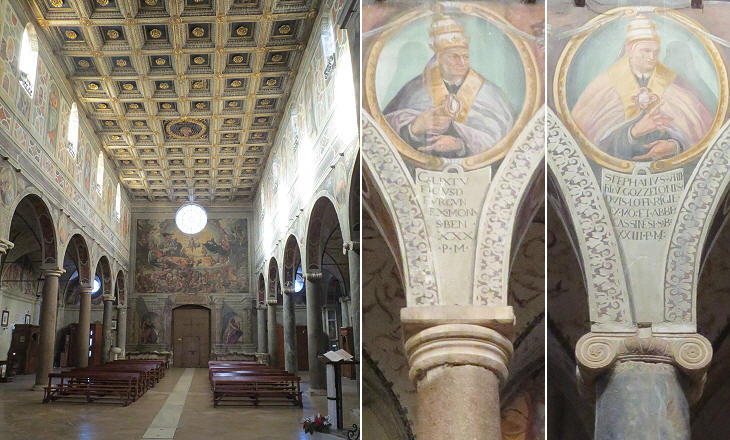 (left) Interior seen from the altar; (right) ancient columns with Renaissance capitals and above them portraits of Calixtus II and Stephen IX (today known as Stephen X), popes linked to the Benedictine Order

The naves of the church are divided by two series of ancient columns, probably found in Roman buildings of the area. Symmetry played a major role in Renaissance architecture so it is rather surprising to find one row of columns of pink granite with Doric capitals and the other one of verde antico (some say of cipollino) with Ionic capitals (with the Orsini rose). Overall the interior of the church recalls that of S. Maria in Aracoeli also owing to the painted ovals above the columns and the large rose window. 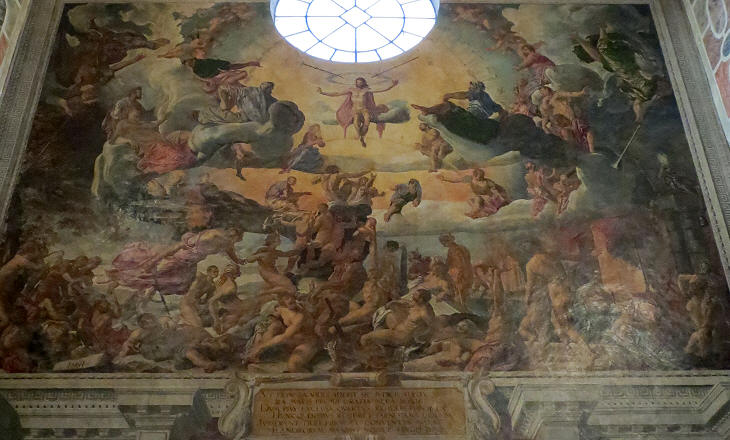 In 1541 Michelangelo completed a fresco depicting the Last Judgement in Cappella Sistina which was commissioned him by Pope Paul III Farnese. In 1547 the Pope appointed Cardinal Ranuccio Farnese Abbot of Farfa and this explains the choice of the subject. It was very popular in Orthodox churches where it was placed so that the faithful would see it on their way out of the building (you may wish to see that at the Meteora Monastery of Agios Nikolaos Anapafsas), but less so in Catholic ones. The purpose of the painting is clearly stated: Ut depicta vides aderit sic iudicis atrox ira malis premii gratia mera bonis (The wrath of God towards the sinner and his benevolence towards the good will occur exactly as you see them painted here). The influence of Michelangelo is visible in the work of van der Broek. Perhaps because he was not too familiar with the fresco technique his Last Judgement is a gigantic oil painting. He worked at Florence, Perugia and Rome. 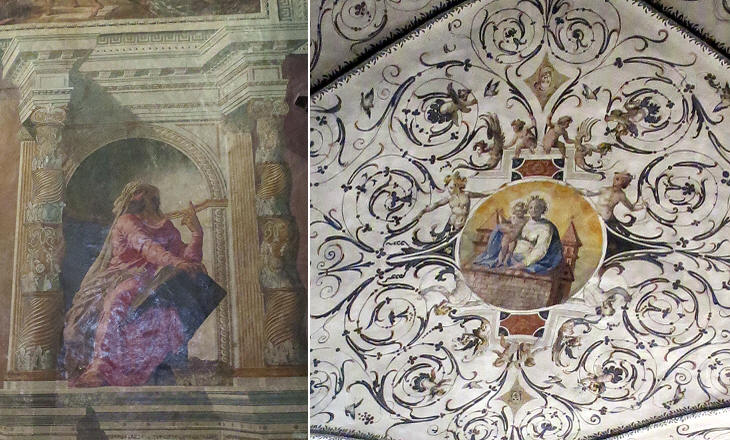 Interior: (left) a prophet; (right) ceiling of the apse with the symbol of the Abbey

In 1563 Cardinal Alessandro Farnese iuniore (junior), brother of Ranuccio, became Abbot of Farfa and in the following years he commissioned painters who were working at his palace in Caprarola with the decoration of S. Maria di Farfa. Many rooms of the palace were decorated with grotesques and this approach was followed for the vaults of the apse and of the naves, something which is highly unusual to see in a church. 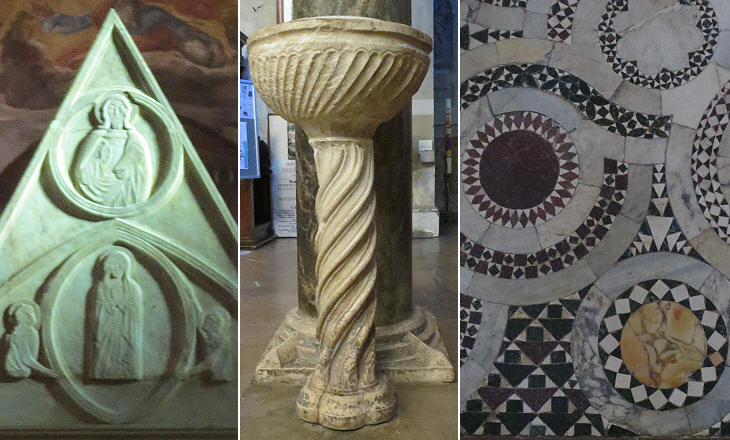 In recent years some elements/decorations of the old church which had been removed/covered, were restored to underline the long history of the abbey. 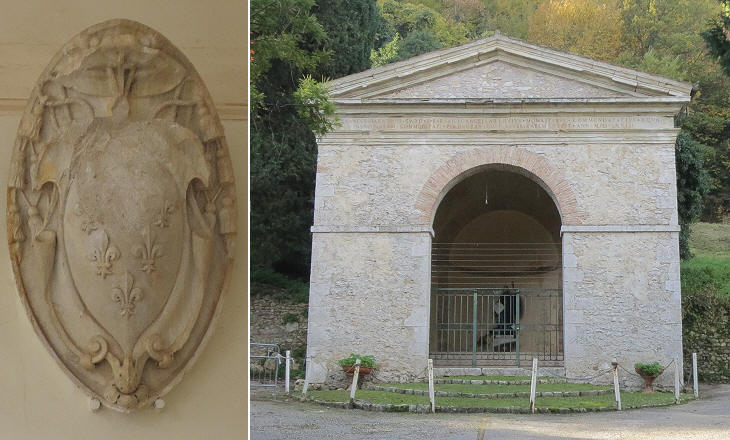 Aqueducts were one of the main achievements of Roman engineering skills. This technology was lost at the fall of the Roman Empire and until the basic principles of hydraulics were rediscovered by Leonardo da Vinci and other Renaissance scientists/engineers. First modern aqueducts were built to provide villas such as Villa di Bagnaia or Villa d'Este with cascading fountains. Cardinal Farnese asked those who designed the gardens of Caprarola to provide the abbey with a proper supply of water. Unfortunately the fountain which was inside the pavilion is lost. Twice a year, after Easter and Michaelmas, there is a famous fair here, much frequented by those who purchase the oil of Farfa, which is sold here in huge barrels. At these times the Titular Abbot, who is also the Procuratore Generale of the whole Benedictine Order comes to reside for a time at Farfa, where there are generally only three monks, to fulfil the offices of the Church. We were fortunate in arriving at this time. The little street was lined with booths full of gay wares, and shaded by coloured awnings of orange, blue, and white canvas.
Augustus J.C. Hare - Days near Rome - 1875
Old prints show that five streets of shops were aligned outside the abbey. They were utilized during the Farfa fairs which were very popular especially until the XVIth century. Pope Sixtus V built a long row of small buildings adjoining his Roman villa with the idea to relocate the Farfa fairs there and he reduced the privileges of the abbey. In 1769 the administration of Farfa was entrusted with the local bishop. In 1860 most of Sabina, including Farfa, was occupied by Piedmontese troops and eventually annexed to the Kingdom of Italy.