Nerola and Monteflavio
(detail of a mural painting in Montopoli) 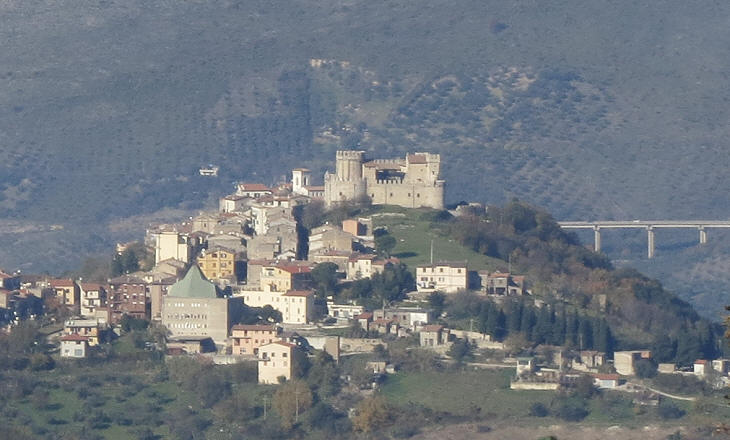 In the XIVth century the absence of the popes from Rome favoured the growth in importance of two historical Roman families: the Colonna and the Orsini. The fiefdoms of the Colonna were mainly located to the south of Rome and those of the Orsini to its north. This latter family controlled all the main routes which led to Rome from the north, including Via Salaria. 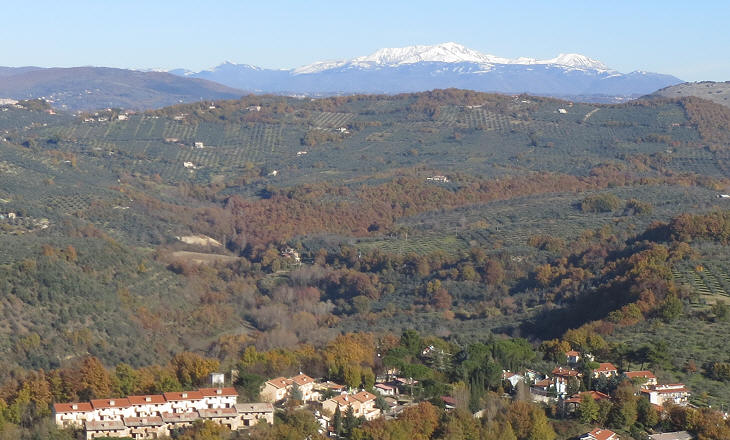 View of the eastern part of Sabina and of Mount Terminillo

For ten years, between 1860 and 1870, Nerola was an outpost of the Papal State because the valley below the town and Via Salaria were part of the Kingdom of Italy. In 1867 the failed attempt by Garibaldi and his volunteers to conquer Rome began with the seizure of Nerola. From there they marched towards Monterotondo and Mentana, where they were checked by Papal and French troops and forced to pull back behind the border. 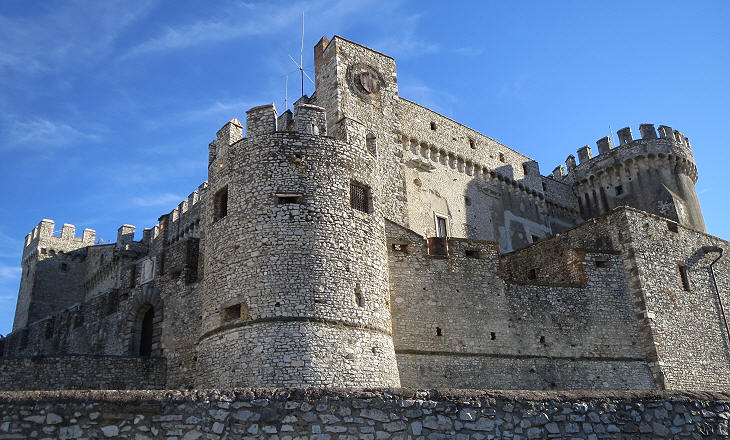 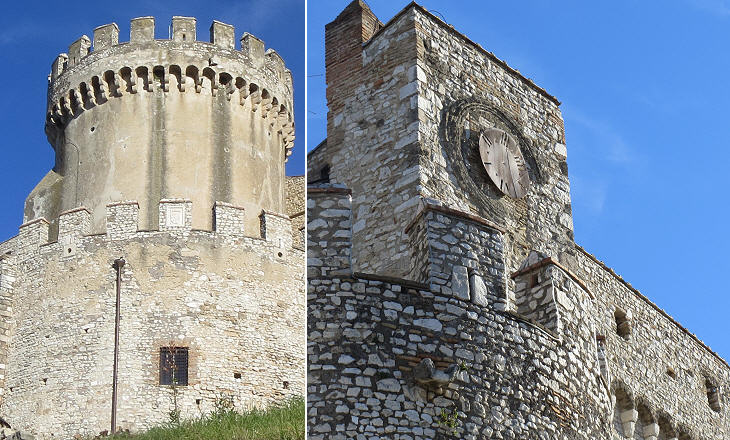 The fortifications of the castle were upgraded to the requirements of cannon warfare in the second half of the XVth century. In 1644 the castle and the fiefdom of Nerola were sold to the Barberini, the family of Urban VIII, the reigning pope. Today it houses a luxury hotel which specializes in hosting weddings and special events (you may wish to visit their website - it opens in a separate window). 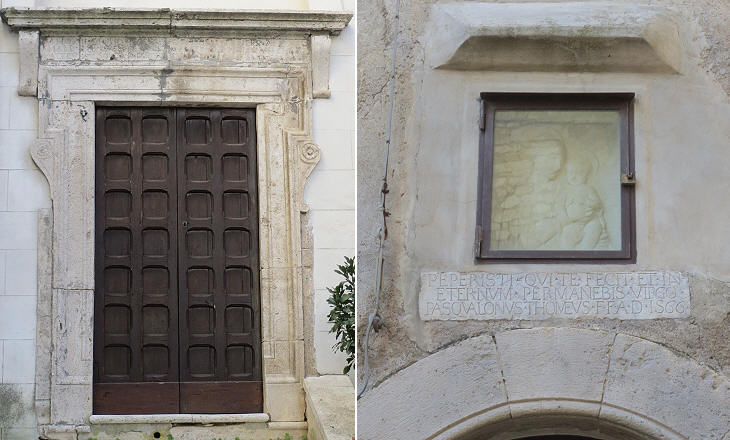 (left) Portal of the parish church; (right) sacred image with a 1566 inscription with the sentence "Thou has brought forth him that made thee, and ever remain a virgin" and the name of the founder of the building

In 1482 the Orsini built the parish church, the portal of which is decorated with roses, their heraldic symbol. The church collapsed in 1915 because of an earthquake, but the portal was not damaged. 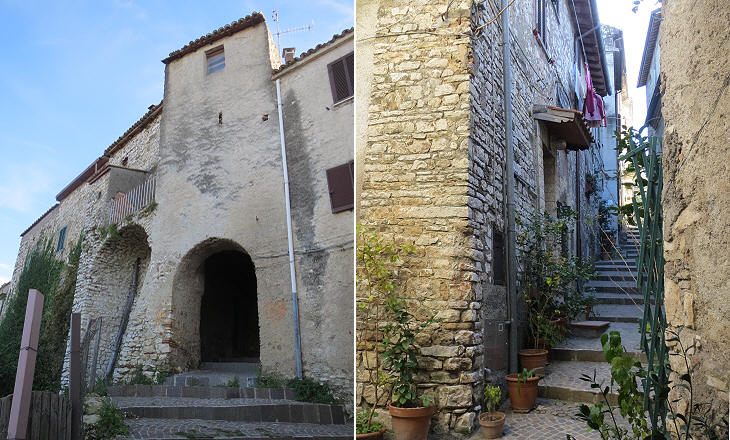 (left) Tower protecting the entrance to Nerola; (right) one of the streets leading to the castle 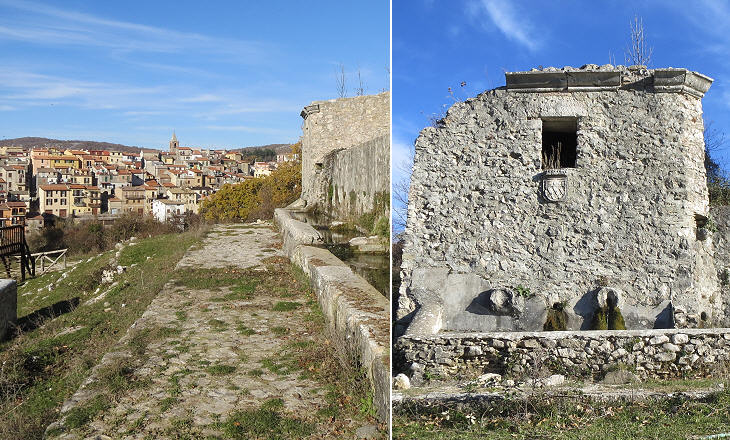 (left) View of Monteflavio from Fonte Orsini; (right) Fonte Orsini (the image used as background for this page shows the coat of arms)

Cardinal Flavio Orsini founded this small town in 1570 on land belonging to his family on the northern side of Monte Gennaro. He offered free pasturage to the very poor peasants of a nearby village who were oppressed by their feudal lord; almost all of them accepted and relocated to Monteflavio. For some years they lived in huts, but eventually they built their houses along a straight main street ending at the parish church. Cardinal Orsini also gave his name to Torre Flavia, a tower on the coast near Palo Laziale, another fiefdom of his family. 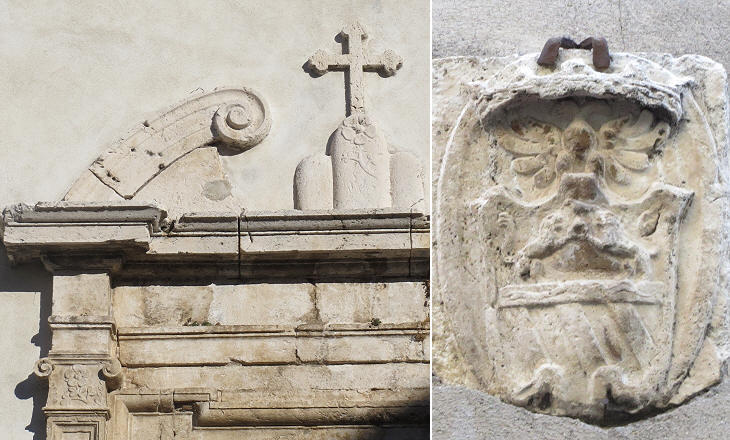 In 1602 the Orsini built the parish church which they decorated with their heraldic symbol. Before the foundation of Monteflavio the area belonged to the Savelli who built a small castle known as Montefalco. The building was already abandoned when the Orsini acquired the fiefdom. The Savelli had a major castle at Palombara, on the western side of Monte Gennaro. 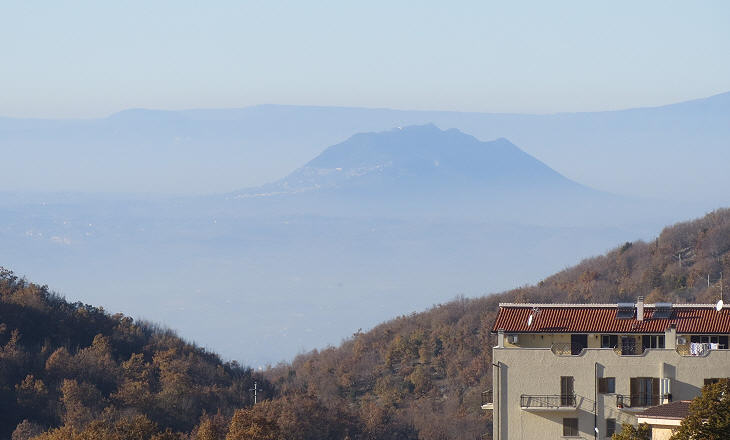