Keff, the Sicca or Sicca Veneria of the Antients is a Frontier Town, and the Third for Riches and Strength in the whole Kingdom; though the greatest Part of the Castle was, about nine Years ago, blown up in the Civil Wars.
Thomas Shaw - Travels or Observations relating to several parts of Barbary and the Levant - 1738
El-Kef means "the rock" and is a reference to the fact that the town is perched on a mountain at 2,500 ft (780 m). The locals however refer to it as Chakbanaria, a corruption of Sicca Veneria, its Roman name. 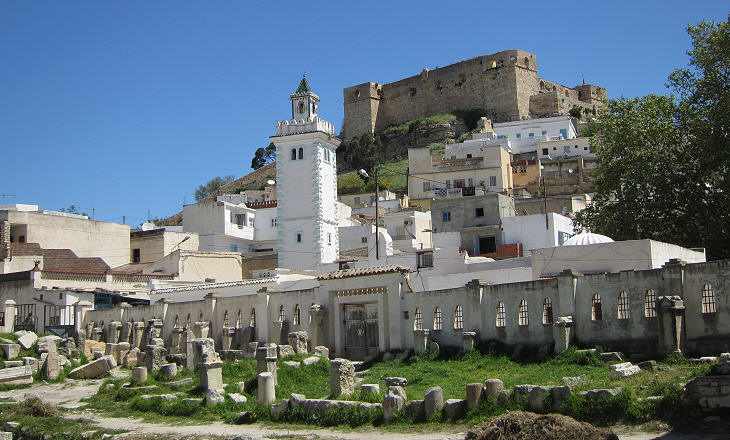 The city, as at present existing, is of irregular shape, enclosed by loop-holed walls, and built on the steep slope of a rock. It is a veritable city in the air, a mere excrescence on the rock. The streets are dirty and ill-paved, but owing to its position, and being well supplied with water, the town is easily washed. The rich plains below have contributed to the prosperity of the inhabitants, but at present many dwellings are unoccupied and in ruins. The town is built entirely with the remains of the Roman city, portions of which still lie below the surface. There are many Roman inscriptions built into the walls of Arab houses, and therefore difficult of access.
Murray Handbook for travellers in Algeria and Tunisia - 1895 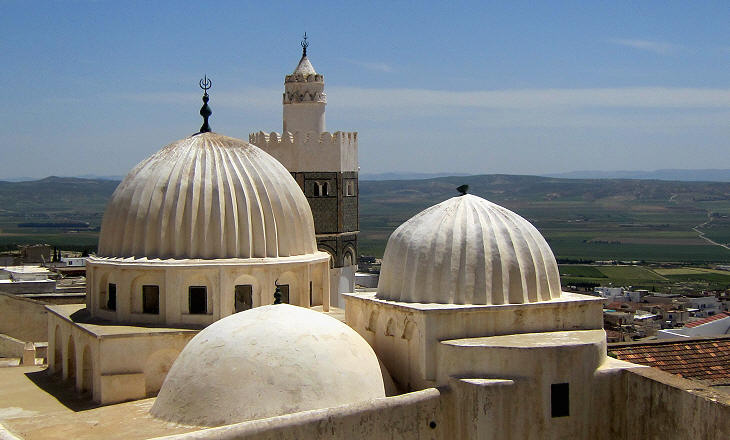 At the time of the Roman Empire Sicca Veneria controlled the road from Carthage to Theveste (today's Tebessa in Algeria) where Legio III Augusta was stationed. It is located in a region which is a transition from the fertile Mejerda River valley to the north and the semi-arid regions of Central Tunisia to the south. Probably in antiquity the region was more verdant than it is today. The economy of Sicca Veneria was based on farming. In addition its female inhabitants relied on the revenues of a shrine to Venus (hence Veneria). 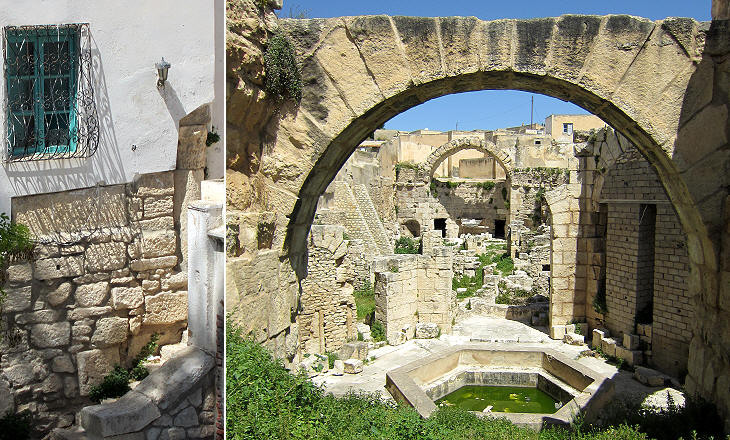 (left) Arab house incorporating a Roman building; (right) Baths: overall view with the hexagonal pool of the "frigidarium" (cold room) in the foreground

Siccae enim fanum est Veneri, in quod se matronae conferebant atque dei procedentes ad questum, dotis corporis iniuria contrahebant honesta nimirum tam inhonesto vinculo coniugia inuncturae.
In Sicca in fact there is a temple to Venus, into which respectable ladies used to gather, and so after they had gone forth to enrich themselves they contracted for their dowries by dishonouring their bodies; respectable marriage, then, no wonder (is made) so disreputable by this obligation of the union.
Valerius Maximus - Factorum et Dictorum memorabilium 2.6.15. Translation by Stephen Benko
Valerius Maximus was a Ist century AD moralist and he did not believe that the women of Sicca prostituted themselves to celebrate the goddess, rather that they did it for the dowry.
The site of the Temple to Venus at Sicca has not been identified, but Shaw reported that In the late civil wars in levelling an adjacent mound, to find materials for the fortress, they found an entire statue of Venus; which was no sooner found than it was broken to pieces by these Iconoclasts.
The best known shrines to Venus where sacred prostitution was practised were at Corinth and Erice. 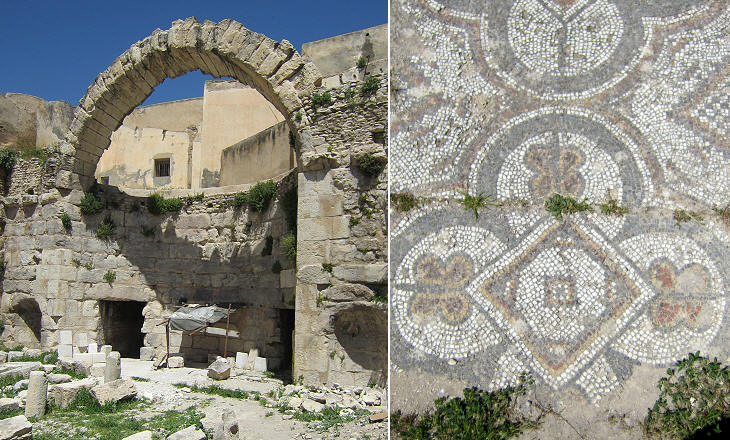 Baths: (left) apse of a hall; (right) detail of a mosaic; another detail of the mosaics can be seen in the image used as background for this page; it has a pattern which can be seen elsewhere, e.g. at Pheradi Maius

The baths and an adjoining series of eleven underground cisterns are the main remaining monuments of Sicca Veneria. By wandering about these ruins in April 2012, one could not avoid asking himself whether these mosaics would have been better preserved by remaining inside the Arab houses which were built incorporating the walls of the baths. 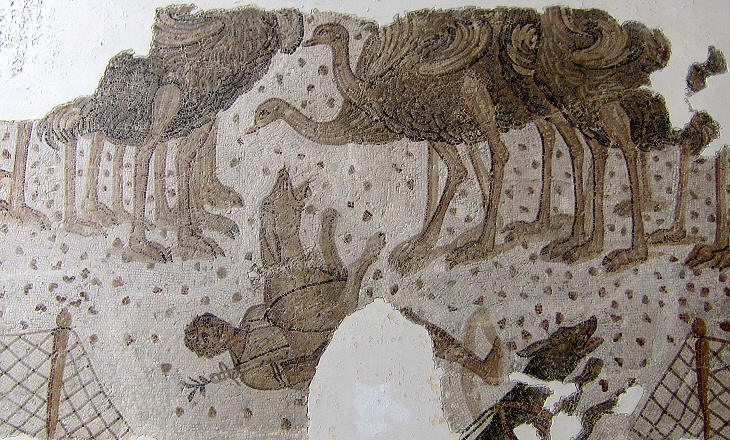 The ostriche is a silly and deafe creature, feeding upon any thing which it findeth, be it as hard and undigestible as iron. The flesh especially of their legges, is of a slymie and strong tast; and yet the Numidians use it for foode, for they take yong ostriches and set them up a fatting. The ostriches wander up and downe the deserts in orderly troupes, so that a far off a man would take them to bee so many horsemen, which illusion hath often dismaied whole carovans. Being in Numidia I my selfe ate of the ostriches flesh, which seemed to have not altogether an unsavory tast.
Leo Africanus - The history and description of Africa: and of the notable things therein contained - 1526 - 1600 translation by John Pory
Venationes were a Roman entertainment based on the slaying of wild animals in amphitheatres. The fight between a man and a lion is the best known example of venatio, but the capture of lions and other large beasts was a costly affair (see a mosaic at Hippo Regius) and often the audiences had to content themselves with less expensive animals. A mosaic at Sousse shows a venatio of antelopes, ostriches, deer and wild horses. Another mosaic at Villa del Casale in Sicily shows the trade of these animals. 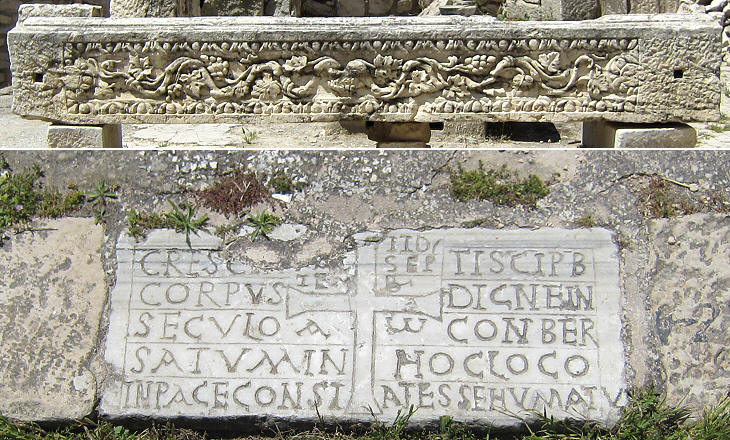 Near the baths: (above) decoration of a lintel; (below) Christian tombstone of a priest, probably a bishop

The presence of a Christian necropolis in the presumable gardens of the baths shows that in the Vth or VIth century the population and wealth of Sicca Veneria were greatly reduced. The quality of the inscription and the misspelling of some words is another indicator of the decadence of the town. 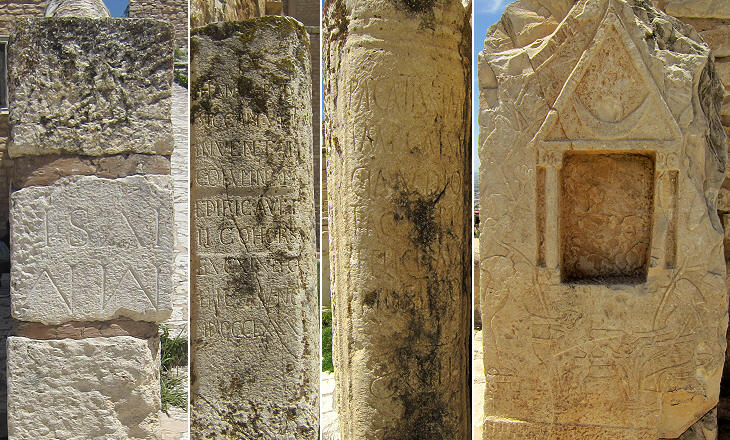 In the Ottoman fortress: (left to right) 1) stone with fragments of a large inscription; 2) French Army inscription celebrating the finding of 3) a column with an inscription celebrating Emperor Marcus Claudius Tacitus (275-76) as "pacatissimus" (promoter of peace) in a very turbulent period of the history of Rome; stela with the symbol of Tanit, a Punic goddess

Shaw reported the smashing of a statue of Venus, but the iconoclast fury spared many ancient inscriptions. The French, during their protectorate over Tunisia (1881-1956), gathered several inscriptions and reliefs in the Kasbah, the fortress at the top of the town which has become a sort of small open air museum. Le Kef was the first Tunisian town to be occupied by the French army in April 1881. 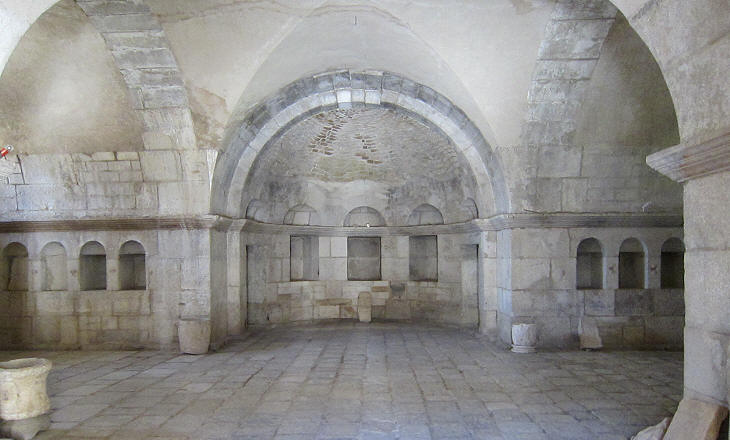 Some late Roman monuments were turned into mosques when the Arabs conquered the town at the end of the VIIth century. Jamaa El-Kebir was the Friday Mosque of Chakbanaria, where all male adults gathered for the Friday noon prayer. It incorporated a IVth century square building the purpose of which is still unclear; in particular its niches and its "office windows" (which can be noticed also in a building at Mactaris) puzzle archaeologists. 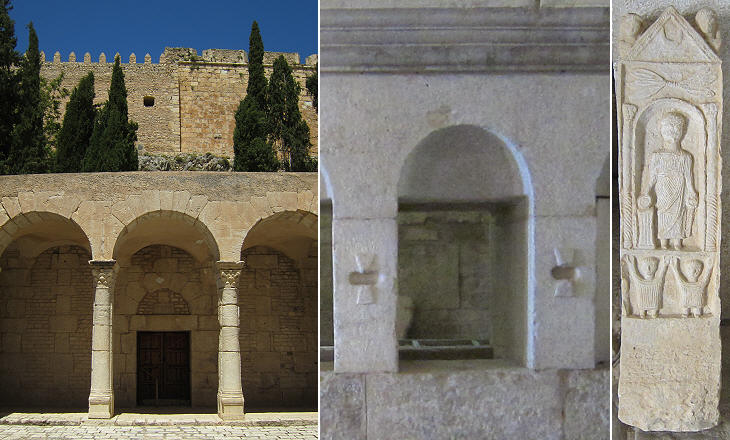 Today the building is no longer a mosque and it houses events of a local festival, in addition to being used as a storeroom for some ancient gravestones. The holes at the sides of the niches are similar to that found outside the theatre of Bulla Regia, but while the latter was probably used to tie horses it is unlikely the same occurred at Jamaa El-Kebir. 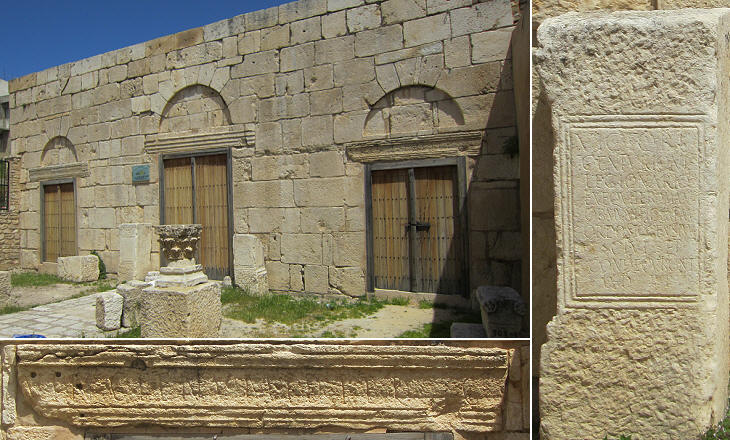 (left-above) Dar El-Kous: façade; (left-below) worn out inscription with Christian symbols on the lintel; (right) inscription celebrating a donation made by a Roman centurion (unrelated to the building)

A church dedicated to St. Peter was turned into a mosque by the Arabs. It reverted to being used as a church during the French Protectorate. It was probably built in the Vth century on the site of the Capitolium, a temple to Jupiter, Juno and Minerva which many towns of Africa erected as a sign of their loyalty to Rome, because the three gods were worshipped in a great temple on the Capitoline hill in Rome (you may wish to see the imposing Capitolium of Thuburbo Majus). The Kasbah was built in 1612 on the site of a previous Byzantine fortress. It was modified in 1679 and again at the beginning of the XIXth century. The complex is actually made up of two almost separate fortresses. The construction of such a huge fortification was due to the rivalry between the pachas of Tunis and Algiers. 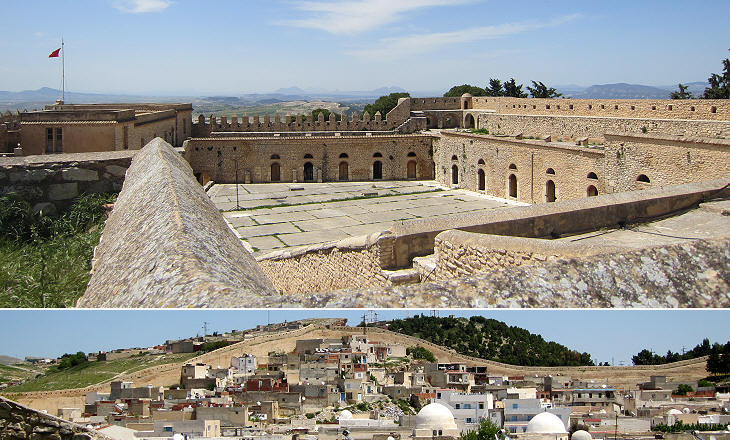 (above) Courtyard of the great fortress; (right) walls protecting the entrance to the town on the mountain side

During the first half of the XVIth century the Spaniards conquered Tunis, Bizerte and Mahdia. The local rulers and in particular Hayruddin Barbarossa (red beard) sought the help of the Ottomans. Eventually they acknowledged the sovereignty of the Sultan, but as a matter of fact local dynasties continued to rule today's Tunisia and Algeria.
In 1756 the Algerians conquered the fortress and plundered El-Kef and then they went on to capture Tunis after a siege which lasted two months. 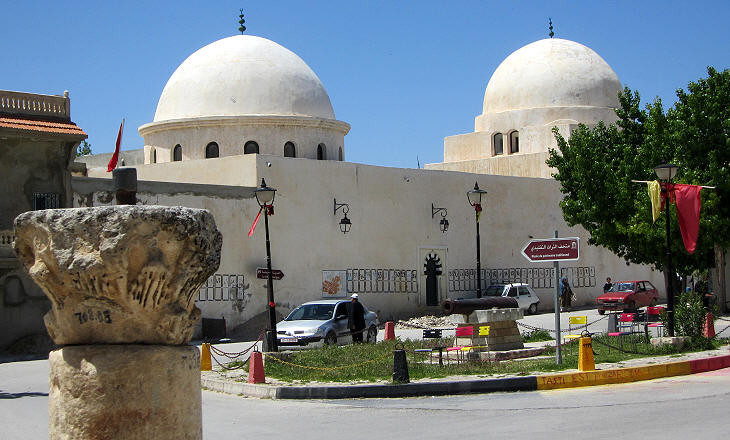