... but difficult to detect!
(Papal coat of arms and lead soldiers)

In April 1796 a small army of 38,000 crosses the south western Alps and enters Italy. The enemy is a large coalition lead by the Austrian Empire with in it all the small Italian States, but this army is bringing the new ideas of the French Revolution and the Chief Commander is the 27-year-old General Napoleon Bonaparte.
A brilliant series of victories at Millesimo, Mondovì and Lodi opens the way to Milan. Then Reggio revolts against the Duke of Este and immediately after the cities of the Papal State follow. In a few months Bologna, Ferrara and Ancona are conquered by the French.
Although in Paris the Revolution is changing into a more middle-class government style, in Italy it's a short period of terror and all the signs of the theocratic power are destroyed including the coats of arms and the statues of the popes.
In February 1797 with the Peace of Tolentino Pope Pius VI loses Bologna, Ferrara, Ravenna and Rimini. A few years later the whole of continental Italy will become either part of the French Empire (including Rome) or will be ruled by States linked to it (the Kingdom of Italy in the north and the Kingdom of Naples in the south), but when this occurs the fury of the Revolution is gone and signs of the past are untouched.
In 1815 Pope Pius VII gets back from the Congress of Vienna the Papal State in its Italian pre-revolutionary borders. But Bologna, Ferrara, Ravenna and Rimini very reluctantly accept a return to the past.
For 45 years their middle-classes will look at ways and means for being part of a united Italian State and the Pope will need the help of the Austrian army to retain control.
Eventually in 1859 the French-Piedmontese alliance started the process of disintegration of the Papal State. Romagna was lost in 1859, the Marche and Umbria in 1860 and Rome in 1870. 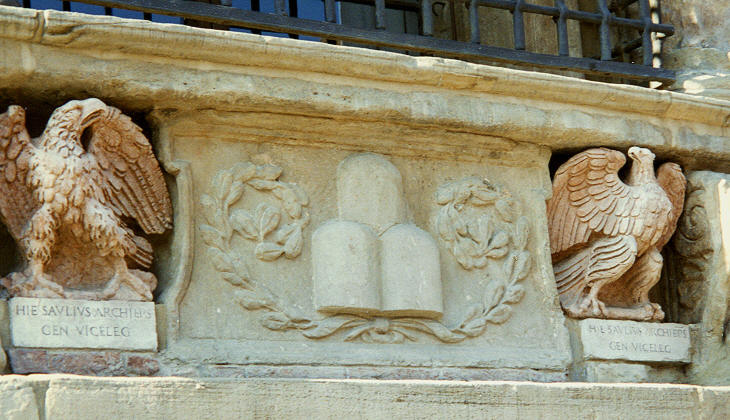 Bologna was the most important city of the Papal State after Rome and many popes wanted to leave their mark in it.
The symbol of Bologna, the statue of Neptune by Giambologna, still has the coat of arms of Pope Pius IV and Palazzo Comunale, the Town Hall was embellished by many references to the popes.
Pope Gregory XIII, born in Bologna, wanted his statue on the façade of the building. The statue was pulled down by the revolutionaries and then put back in 1815, but the coat of arms was completely destroyed.
Pope Julius III had more luck in the sense that he had embellished the façade with motifs linked to his coat of arms and so they survived. 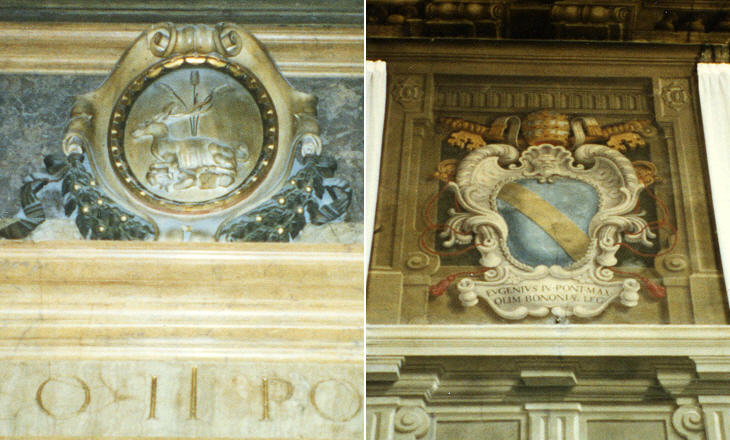 Bologna, as the other cities of Romagna and Marche, was ruled by a Cardinal Legate. This position was regarded as an excellent step towards being elected Pope.
The revolution had a different treatment of the coats of arms: sculptures were usually destroyed while frescoes were covered. For this reason the beautiful room with the coats of arms of the Cardinal Legates of Bologna is still one of the most admired parts of Palazzo Comunale: the coats of arms of the cardinals who became popes have a special layout in the upper part of the walls. You can see the coat of arms of Eugenius IV with under his name "OLIM BONONIA LEGATUS" (once Cardinal Legate of Bologna) and you can also detect details of the cardinal's hat.
The coat of arms of Pope Marcellus II shows a doe: in this case all signs of the Pope were eliminated, but the beauty of the doe won the respect of the iconoclasts. The history and the glory of Ferrara is linked to the dukes of Este. Playing alternately with the Church and with Venice they managed to keep Ferrara independent and made it rich. The area within the walls is very large as the dukes thought the city would expand.
But in the end the dukes were unable to resist the pressure of the Church and that of their debts. In 1598 Duke Cesare d'Este gave Ferrara to the Church to retain Modena and Reggio where his family reigned until 1859.
Ferrara rapidly lost importance and the people blamed the papal rule for this. So it is not surprising that in 1796 the destruction of all signs of the papal rule was total, nor did the popes attempt to revive their presence when they regained possession of the city in 1815.
One of the greatest Italian poets, Ludovico Ariosto was of Ferrarese origin and to him is dedicated a large square near Palazzo dei Diamanti with a tall column in the center and on top of it the statue of the poet.
In 1796, however the statue was that of Pope Alexander VII who used a pre-existing column the Este had erected. Alexander VII, knowing the ups and downs of history, wanted the column to bear a more subtle indication of him and so he had it embellished with oak branches and leaves, one of the symbols in his coat of arms. In this case he was right: his statue was pulled down and destroyed, but Ludovico Ariosto sees Ferrara from the top of a column with the Pope's heraldic symbol. 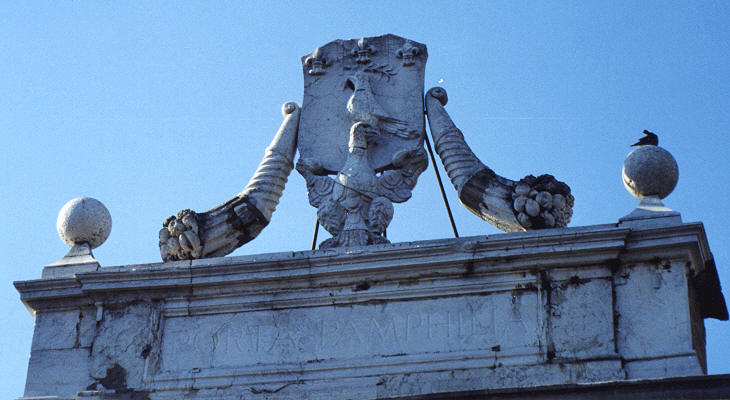 In the largest cities and towns of the Papal State the gates very often show the coat of arms of a pope. In Ravenna only this memory of Pope Innocent X has survived (one can still read Porta Pamphilia). The dove, the heraldic symbol of the Pope has lost the signs of power, but still flies! 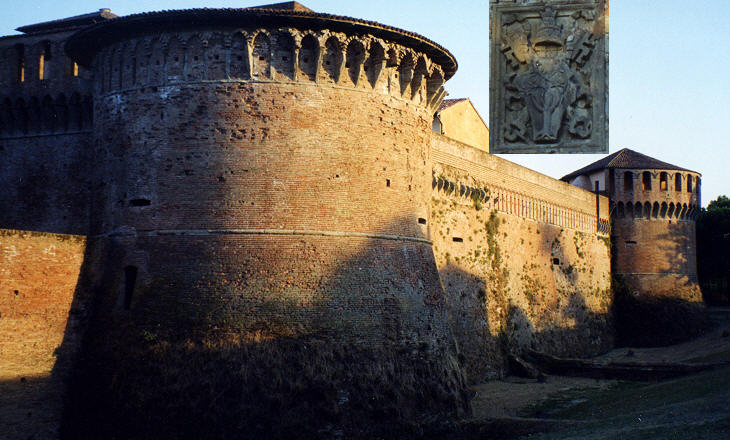 The Rocca of Imola

When looking for coats of arms in a small town together with the cathedral, the palazzo comunale and the main fountain there is usually a rather large castle (Rocca if on a hill) which bears the sign of the pope who built it. In Imola the Revolution spared the coat of arms of Julius II on the Rocca. He fought against the corrupted relatives of his predecessor Alexander VI who had gained possession of Imola and many other towns in the area. This made him popular and respected forever.

Pope Gregory XIII was the first to make use of his heraldic symbol, the dragon, in an original way. Dragons came out of the formal coat of arms and became the theme of many decorations. His example was followed especially by the popes who had animals in their coat of arms. Pope Paul V had not only a dragon, but also an eagle to play with. In this way he is still celebrated in the main fountain of Faenza. 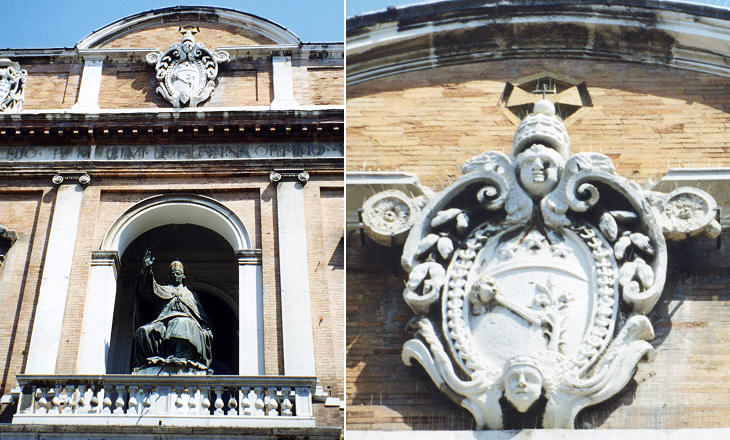 The statue of Pope Pius VI

Pope Pius VI was born in Cesena and still his surname (Braschi) is popular there. So that explains why his statue and coat of arms survived the fury of the revolution (they were removed for some years). The coat of arms shows some lilies withstanding the action of wind, but the wind was too strong. 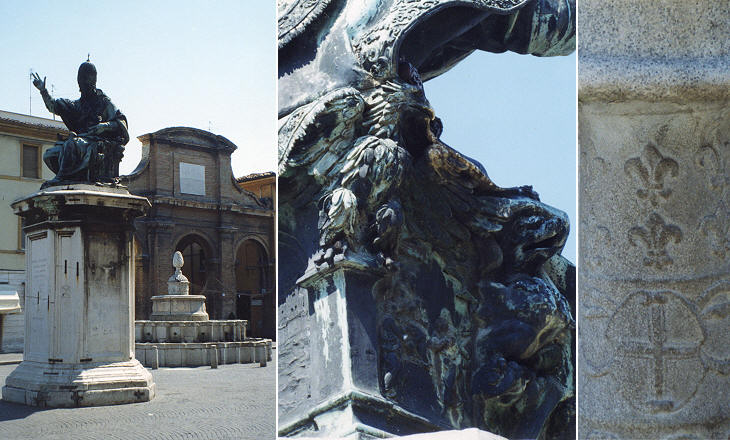 (left/centre) The main square of Rimini with the bronze statue to Paul V; (right) detail of Fontana della Pigna

Today a busy beach resort, Rimini is also a city of art, worth a visit just for Tempio Malatestiano. The revolution was harsh on all signs of the theocratic state. In the main square there were two of them.
The statue of Paul V was pulled down (one can still see where the marble base was broken) and the coat of arms destroyed. The statue was eventually put back in the square, but without the coat of arms. Paul V however is not deprived of the company of the eagle and the dragon, symbols of his family.
The Renaissance fountain too tells us about the pope who wanted it. The fleurs-de-lis of Paul III Farnese sculpted on one of the columns escaped the attention of the revolutionaries. 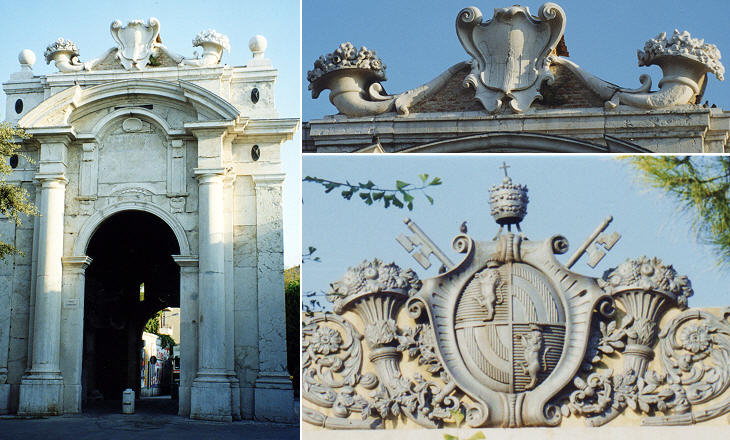 Pope Pius IX of the Mastai Ferretti family was born in Senigallia. During his long reign (1846-1878) he saw the formation of united Italy. At the beginning he was seen as the potential leader of a Confederation of Italian States, but when he died he had lost all his territories. There are many coats of arms of this Pope in his hometown. Of the past only the coat of arms (without the Pope's symbols) of Pope Benedict XIV, a very popular pope, was spared. It is on top of Porta Lamberta (Lambertini being the surname of the pope) a very nice XVIIIth century gate.