Spoleto
(relief of a tabernacle in S. Gregorio Maggiore)

(left) The route of the train; (right) view of the Umbrian Valley from Spoleto - in the lower part of the image S. Ponziano and in the distance (upon a hill) Trevi

Between Terni and Spoleto the railway winds by cuttings and tunnels through the Monte Somma, which in vetturino days was a most picturesque and interesting pass. It is said to derive its name from a temple of Jupiter Summanus on its summit. We emerge from the mountains close to the grand old archiepiscopal city of Spoleto which covers the sides of a lofty hill, while, behind, rises its fortress, and then the great Monte Luco, dotted with hermitages peeping out of the rich foliage of evergreen woods.
Augustus J. C. Hare - Days near Rome - 1875
After Terni the train leaves the Nera valley and it moves northwards through a ridge of low hills: it soon reaches a large valley known as Valle Umbra (Umbrian Valley), which was also called Valle spoletina, after Spoleto the town located on a hill at its southern end. In ancient times the valley was covered by a lake (Lago Tiberino): the deposits carried by the streams flowing into the lake from the Apennines gradually filled it and eventually the Etruscans opened a canal at the northern end of the lake to allow the remaining water to flow into the Tiber.

The valley was always at risk of becoming a marshland until the Romans in the Ist century BC assigned its territory to a large number of veterans. They dug canals, planted willow trees and poplars to absorb the excessive water, introduced a farming mix which included grains, orchards, olive trees and vineyards. Spoleto was built by the Romans on an existing settlement of the local Umbrian tribes: the lower part of the Roman walls shows sections which belong to these early settlements (see similar walls at Amelia).
Spoleto played an important role during the Second Punic War by stopping Hannibal, who after the victory at Lake Trasimeno, wanted to rapidly reach Rome, but was forced to make a detour because of the resistance of the town: the name of one of the old gates Porta della Fuga (Gate of the Flight) recalls that episode. Spoleto retains several monuments of its Roman past including an arch, a theatre and an amphitheatre.

In 576 Spoleto became the centre of an important duchy established by the Longobards and for many centuries it was the most important town of Umbria: in the XIIth century it was destroyed by Holy Roman Emperor Frederick Barbarossa, but Spoleto recovered very quickly and became one of the strongest Comune (town-state) of Umbria: this development was helped by the anarchy which existed in the Papal State, to which the town belonged. The growth of Spoleto continued until 1359 when Cardinal Gil de Albornoz restored the papal authority and built a strong fortress (see a a page on it) on the top of the hill; the fortress was supplied by an aqueduct which crossed a deep ravine through a very spectacular bridge.

Some of the medieval towers of Spoleto have a distinct design: their corners were built using stones having a different colour. Torre dell'Olio owes its name to the boiling oil which was thrown from it upon the assailants.

Spoleto has several Romanesque churches built between the XIth and the XIIIth century: in some cases (the bell tower of S. Gregorio Maggiore and parts of S. Eufemia) stones from Roman buildings were used. The Latin words inter vineas mean among the vineyards; this because the church is located out of town.

We may descend to the Porta Romana, outside which is a charming passeggiata, an avenue of acacias with box hedges. It leads towards a convent on a hill. (..) On the left, approached by a long flight of steps, is the Church of S. Pietro, the original cathedral dedicated to S. Brizio, who is buried there. Hare
The finest Romanesque church is no doubt S. Pietro which is located outside the walls. Its façade is almost entirely decorated with very fine and interesting reliefs.

S. Pietro - medieval reliefs: a) doe killing a snake; b) punishment of the sinners; c) vocation of St. Peter and St. Andrew; d) farmer with his dog and oxen

The west front is most curious: between the square-headed doors are reliefs of monsters, men in conflict with lions, and angels and devils disputing over the dead. Above are cows, and male figures, in high relief. Hare
We do not know the name of the artists who worked on the decoration of the façade: the reliefs to the sides of the main door are likely the work of the same sculptor: although apparently they do not seem to have a common theme, they do have one: the fight between good and evil illustrated by episodes taken from the Bible and from medieval accounts.

In the XIIIth century Spoleto expanded well beyond the limits of the Roman town on the hill: in 1296 the municipal authorities built new walls at the foot of the hill. 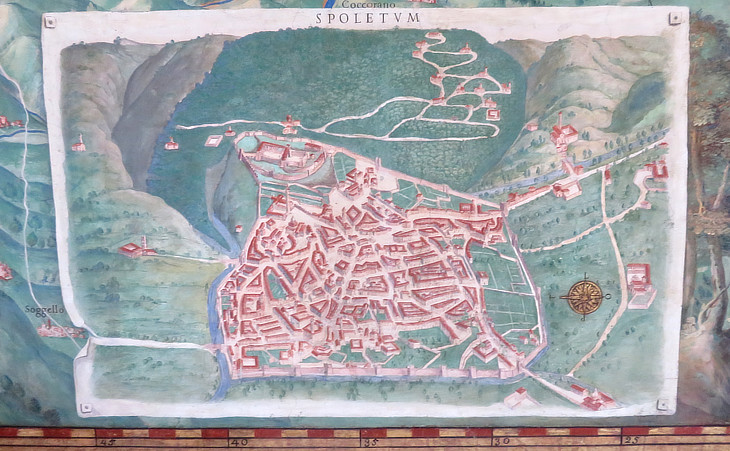 The image in the background of this page shows a relief near Porta di Monterone portraying a knight, symbol of Spoleto.