- Stampalia (Astypalaia)
(detail of a 1651 engraving by Marco Boschini)

We followed the edge of the great basin of Santorin, obtaining views of the eastern sea with Anaphe, the three peaks of Amorgos, and the distant Astypalaea, which is in Turkish waters.
Henry Fanshawe Tozer - The islands of the Aegean Sea - 1890
Stampalia is part of Dodecanissa (twelve islands) a Greek province in the south-eastern part of the Aegean Sea. However the name given to these islands is rather recent as it dates back to 1912 when the Italians occupied them (the largest one being Rhodes); at that time they were still part of the Ottoman Empire and were called Southern Sporades. Stampalia however, because of both its location and history can be more correctly considered as part of the Cyclades.

Views of the town and of the castle

Stampalia called anciently Astypala. Is 80 miles in circumference, being very mountanous. It hath but one Town, and that but a very small one. The Port is large, being to the North, yet not of the best anchor hold, being full of small Rocks.
Bernard Randolph, b. 1643. The present state of the islands in the archipelago
This island, although rich in inscriptions, has few other Hellenic antiquities. This is probably due to the fact that the mediaeval castle of the Quirini and the modern town (Chora) occupy the sites of the ancient acropolis and city. They stand on a high promontory that juts out to the east at the south end of the isthmus, between the two parts of the island.
Dawkins, R. M., & Wace, Alan J. B. (1906). Notes from the Sporades.
The island was inhabited, during the historical period, by Megarians and Dorians from the Argolis. (..) As has been attested, especially from Hellenistic inscriptions, the city must have played an important role in the Aegean, owing to the seafaring ability of its inhabitants. (..) Small Hellenistic coins represent Perseus, Gorgo, and later Dionysos, Athena, and Asklepios. During the Roman period, Astypalaia became civitas foederata, while in the Imperial period it was autonomous.
From The Princeton Encyclopedia of Classical Sites
The acquisition of Stampalia by the Querini followed that of Nasso by Marco Sanudo. But while Nasso was a relatively large island with some fertile valleys and it was surrounded by many other islands, the rugged mountains of Stampalia had very little to offer.

Views from the castle towards the two coves it protects

The present population is about 1500, and is steadily decreasing; many natives of Astypalaea have settled at ScalaNova (Kusadasi) near Ephesus (Seljuk). This is due to the decay of agriculture, disafforestation and consequent scarcity of water, as well as by lack of means of communication, and it is quite likely that before long history will repeat itself and the island will again become almost deserted. By the beginning of the fifteenth century Astypalaea had so suffered from the constant wars and continual piratical raids that it was almost depopulated. (..) Its latest decline perhaps began early in the nineteenth century, when western European manufactures ruined the Levant trade. Nowadays its condition is miserable. Dawkins & Wace
The main town of Stampalia is located on the top of a hill allowing a view over two small coves and over the narrow isthmus (less than 50 yards) which links the two parts of the island. If Stampalia had little to attract settlers, it had a lot to attract pirates (and later on corsairs). Its elongated shape and the surrounding islets offered many coves where they could easily hide. A location not far from the main town is still called Maltesana, because the Knights of Malta used to cast anchor there during their fights against the Ottomans in the XVIIth century.

En route to the castle

Within the castle, which is still inhabited, is a maze of narrow streets and crooked courts. Dawkins & Wace
The Querini built a fortified citadel which included a church and their own palace. The access to it was protected by the peasants' houses and it could only be reached via a maze of narrow streets. In the XIVth century the rule of the Querini was challenged by the Byzantines and by the Ottomans who were able to temporarily seize the island, but the Querini always managed to come back.

Walls of the castle

The only traces of Hellenic building still to be seen, are below the acropolis to the north. Here there is a terrace wall, somewhat over two metres high, polygonal in style and built of big blocks. (..) A little below this spot other "marbles" have been dug out by the natives, but nothing is visible on the surface. Dawkins & Wace
The citadel was built on an existing fortification and at some points its medieval walls were just a modest addition to the ancient ones and to the natural precipitous slope. The interior of the citadel is almost completely lost, only the outer walls have survived to this day. 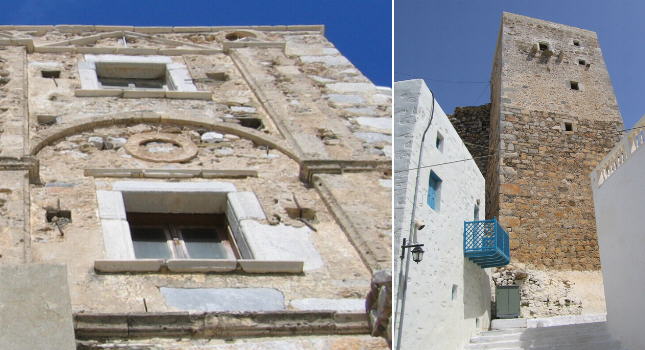 Details of the main building and of a surviving tower

In 1413 Giovanni Quirini, lord of the island, recolonized it and built the castle, but by 1470 under his son Francesco I the population had sunk to 400. Dawkins & Wace
The Querini residence shows some signs of its Renaissance design. In 1413 the Querini made a major attempt to repopulate the island, but with the fall of Constantinople in 1453 and the loss by the Venetians of Negroponte in 1470 the risk of Ottoman raids increased. 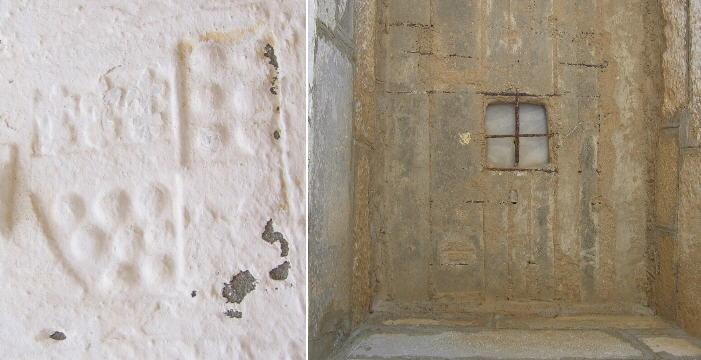 Entrance to the castle: (left) coat of arms of the Querini; (right) small opening on its ceiling; the image used as background for this page shows a detail of another coat of arms

The promontory is capped by a steep rock accessible only from one side; this acropolis is now occupied by the castle, whose entrance yet bears the arms of the Quirini, while inside it there still exists the inscription of Giovanni Quirini, its builder. Dawkins & Wace
The situation worsened in 1522 when Sultan Suleyman the Great conquered Rhodes: the fortifications of Stampalia could do very little in case of a serious Ottoman attempt to seize the town: the opening in the ceiling above the entrance was a sort of silver bullet in case of attack: it is said that the defendants used it to throw beehives on the assailants to disband them. Clearly it was a useless weapon against the Sultan's powerful guns, so the Querini had to resort to diplomacy to avoid losing Stampalia.

Coats of arms of the Querini

The Turks coming to receive tribute from these people, but they having notice, retire into the Mountains, leaving nothing of worth behind them. Some years since they have agreed to give 1000 dollars per ann. Randolph
A new war between the Ottoman Empire and Venice broke out in 1537: Suleyman wanted to get rid of the Venetian presence in the Levant; rather than fighting in the Aegean Sea, he moved his army by land to the Albanian shore and from there he laid siege to Corfù, the key bastion of the Venetian military power in the Mediterranean. Corfù did not fall and eventually Suleyman gave up. The Venetians however were willing to reach a peace agreement and in this context in 1540 the Querini had to surrender Stampalia to the Ottomans, who did not actually occupy the island, but imposed a yearly payment on its inhabitants.