The first non-Catholic church of Rome is a work by George Edmund Street, a leading English architect who is best known for having designed the Royal Courts of Justice on The Strand in London. Although most of his works were inspired by the medieval Gothic architecture prevailing in England and France, in the design of St. Paul's he followed the pattern of northern Italy churches.
The construction of the church was promoted by the Americans in Rome who belonged to the Anglican Episcopal Church (you may wish to visit their web site - it opens in another window). The church was built along Via Nazionale, a street the Italian government regarded as the symbol of Terza Roma (the Rome of Italy after those of the Empire and of the Popes). A funny aspect of this decision was that it greatly enriched Xavier de Mérode, a Belgian prelate who had been for many years Pope Pius IX's Minister of War. During the last years of the Papal State he bought most of the land between Piazza di Termini and S. Vitale, the site of the future Via Nazionale.

Ministero delle Finanze (1872-77) and its gigantic coat of arms

Strada Pia, the street linking Palazzo del Quirinale with Porta Pia was sparsely populated before 1870; for this reason it was selected as the location for many government buildings. It was renamed Via XX Settembre (the day Italian troops entered Rome in 1870). Ministero delle Finanze (1872-77) was the largest of these palaces and it was decorated with a gigantic coat of arms of the Savoia, the Italian royal family. The style of building and of many others is commonly called stile umbertino after the name of the king during whose reign (1878-1900) most of them were completed. It is a Neo-Renaissance style: the architects who designed them had in mind not so much the palaces of the Roman Late Renaissance, but two palaces of the XVIIIth century (Palazzo della Consulta and Palazzo Braschi) which marked a return to a more composed design after the Baroque period.
The stile umbertino palaces are seldom remarkable, but they at least spared the historic centre of Rome the extravagant designs which characterized the late XIXth century architecture in many European cities.

Palazzo delle Esposizioni by Pio Piacentini was inaugurated in 1893

Most buildings of the late XIXth century served practical purposes, but some had the specific objective to show that the Italian Government was determined to pursue the embellishment of Rome.
Notwithstanding the amount of public money poured into some of these enterprises, especially the Monument to King Victor Emmanuel II, results were seldom satisfactory.
The façade of Palazzo delle Esposizioni was shaped as a gigantic triumphal arch, but the size of its upper part and of its statues were not consistent with the lower one and the inscription was trivial.

The Roman aristocracy during the papal rule had always preferred to invest in real estate properties rather than in farming or manufacturing. For this reason the families of nobiltà nera (the papal nobility) greatly gained from Rome becoming the capital of Italy. Colonna, Boncompagni Ludovisi, Borghese, Barberini, Pamphilj, Odescalchi, Torlonia all had large possessions in Rome and in the countryside, the value of which greatly increased.
Prince Maffeo Sciarra Colonna owned the land behind his family palace on Via del Corso and he personally took care of its development. He thought that its central location was appropriate for a shopping arcade (in Italian: galleria). He spared no expense for its decoration which was commissioned to the painter Giuseppe Cellini. Every inch of the arcade was painted; large frescoes portrayed scenes of family life having a moral intent, long Latin inscriptions celebrated the virtues of motherhood; here and there coats of arms of the family (Colonna/Barberini) and initials of Maffeo Sciarra completed the decoration. The venture however did not turn profitable; in addition other initiatives of the prince went wrong so that he had to sell first the works of art of his collection and eventually not only the arcade, but even his family palace.

Piazza Cavour in Prati, similar to Via Nazionale, was regarded as a symbol of the Italian Kingdom and of its lay religious policy. Camillo Cavour was the bête noire of the Catholic Church, the most disliked Italian politician, for having supported legislation which abolished clerical privileges. Of the four Fathers of the Italian Nation (King Victor Emmanuel II, Camillo Cavour, Giuseppe Garibaldi and Giuseppe Mazzini) the latter had to wait until 1949 to be celebrated by a monument.
A large church of the Waldense community added to the antipapal character of Piazza Cavour. The Waldenses are followers of Peter Waldo, a XIIth century French merchant who gave up his possessions and became a wandering preacher. They were persecuted for centuries and survived only in some upper valleys of Piedmont until they were granted full religious and civil rights by King Charles Albert in 1848. The construction of the church was financed by the widow of John Stewart Kennedy, a rich American banker and philanthropist, born near Glasgow, Scotland.
The construction of walls along the Tiber led to pulling down Teatro Apollo (or Tordinona), the best known theatre of Rome. Piazza Cavour was selected for replacing it with Teatro Adriano (the name is a reference to nearby Mole Adriana). It could seat 5,000: it rarely had a full house, so in 1950 it was split into two separate halls. In the new quarters built outside the walls architects felt freer to experiment: you may wish to see Villino Ximenes.

Piazza del Popolo for centuries was the first piazza which travellers saw upon their arrival in Rome. With the development of railway and the location of Stazione Termini on the site of former Villa Peretti things changed. The Italian Government promoted the embellishment of a piazza near the railway station: it was named after the ruins of a circular hall (exedra) of Diocletian's baths.
Piazza dell'Esedra with the high central jet of its fountain and its elegant cafès and hotels was until the 1950s a "must see" for all visitors.
Later on private motoring and mass air travel deprived it of its role of first (fine) thing seen in Rome; the closeness to the railway station became a negative factor by attracting not very ideal crowds. In recent years action was taken to bring back Piazza dell'Esedra to its former rank.

Comparisons with what the Roman emperors and the popes had built caused a lot of headaches to the politicians, architects and artists who were involved in making Rome the capital of a modern state.
Bernini had decorated Ponte S. Angelo with statues and the members of the commission in charge of approving the project for Ponte Vittorio Emanuele II thought that because this bridge was very close to the old one it had to be decorated with statues too. 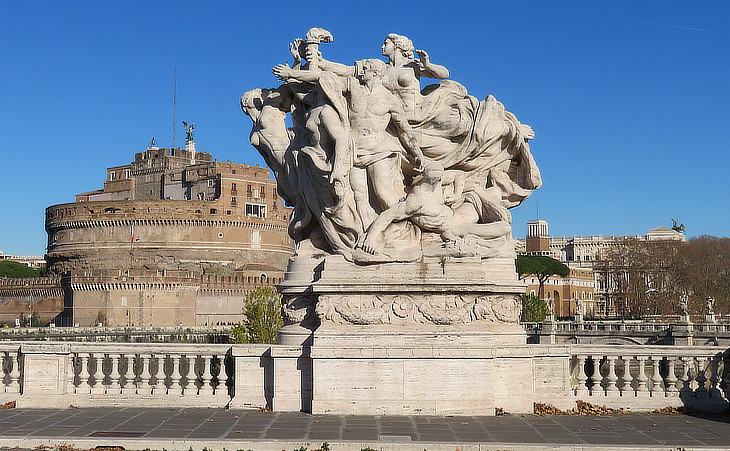 While the purpose of the angels by Bernini is immediately understood, the subjects of the four groups of statues of the new bridge require a lengthy explanation. In addition, while Bernini played with the wings of the angels to ensure his statues could be seen from various points, the groups of Ponte Vittorio are too big and too parallel to the bridge; passers-by can only see the statues on the other side of the bridge and only from a frontal viewpoint: the end result is that nobody looks at them.
The image used as background for this page shows the equestrian statue of King Victor Emmanuel II in the monument dedicated to him.

Previous pages: Part I: Ancient Rome:
I - The Foundation and the Early Days of Rome
II - The Early Republican Period
III - The Romans Meet the Elephants
IV - Expansion in the Eastern Mediterranean Sea
V - Pompey and Caesar
VI - Augustus
VII - From Tiberius to Nero
VIII - The Flavian Dynasty
IX - From Nerva to Marcus Aurelius
X - A Century of Turmoil (180-285)
XI - From Diocletian to Constantine
XII - The End of Ancient Rome
Part II: Medieval Rome:
I - Byzantine Rome
II - The Iron Age of Rome
III - The Investiture Controversy
IV - The Rise and Fall of Theocratic Power
V - The Popes Leave Rome
VI - From Chaos to Recovery
Part III: Modern Rome:
I - Rome's Early Renaissance
II - Splendour and Crisis
III - A Period of Change
IV - The Counter-Reformation
V - Early Baroque Rome
VI - The Age of Bernini
VII - The Loss of the Leadership in the Arts
VIII - A Sleeping City
IX - Grand Tour Rome
X - Drama at the Quirinale
XI - The Agony of the Papal State