Thessalonica was founded in 315 BC by Cassander, King of Macedonia, who enlarged an existing settlement known as Thermae and gave it the name of his wife, stepsister of Alexander the Great, who was so called to celebrate a victory (nike) over Thessaly, a region south of Mt. Olympus.
Thessalonica acquired importance in 148 BC when it became the capital of the newly established Roman province of Macedonia. The Romans built Via Egnatia, a major road which linked the city with the Adriatic coast of Albania and from there through Brindisi and Via Appia to Rome (the main street of today's Thessalonica is Odos Egnatia). 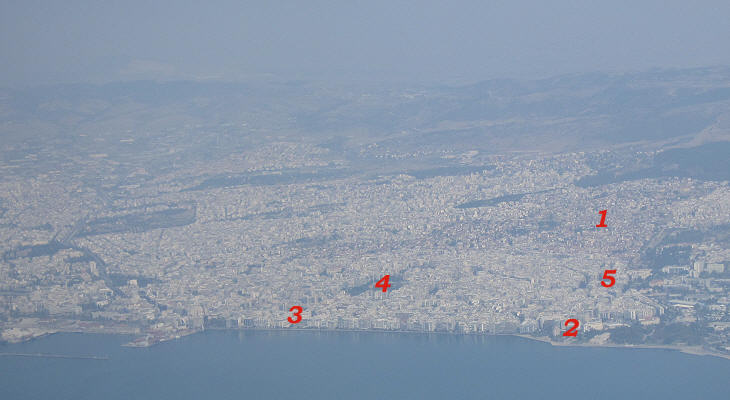 Roman Thessalonica consisted of an acropolis which was located south-east of a small bay, of a lower town with a large market and of the harbour which was further inland compared to the current coastline; this layout was very similar to that of Smyrna (today's Izmir). These two ports of the Aegean Sea have in common some recent events; they both experienced a very destructive fire (Thessalonica in 1917, Smyrna in 1922) and they both were greatly affected by the 1923 exchanges of population between Greece and Turkey: Thessalonica lost its Turkish citizens, Smyrna the Greek ones; the two cities, and in particular Thessalonica, housed a large Jewish community. 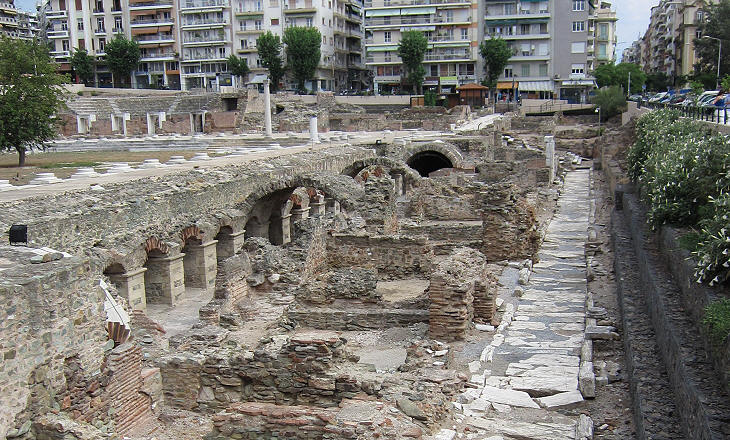 After the 1917 fire Thessalonica was rebuilt and it significantly developed becoming the second largest city of Greece and its main manufacturing and trading centre; in recent years during excavations aimed at replacing small buildings with larger ones, remains of the Roman town were unearthed. They consist of a double portico which surrounded a large rectangular square having at one end an odeon, a small covered theatre; they are thought to have been built in the late Ist century AD. 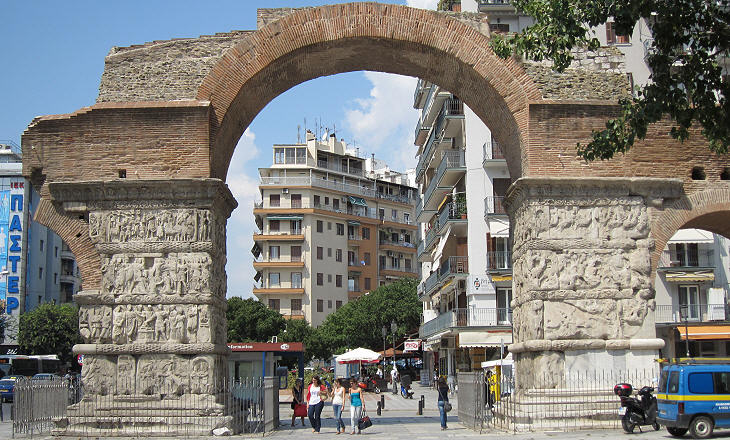 The most imposing monuments of Roman Thessalonica belong to the early IVth century when Galerius set his residence in the city; he was a general of Emperor Diocletian who in 293 was appointed Caesar (a sort of junior emperor in the frame of the Tetrarchy system) and married Valeria, Diocletian's daughter. 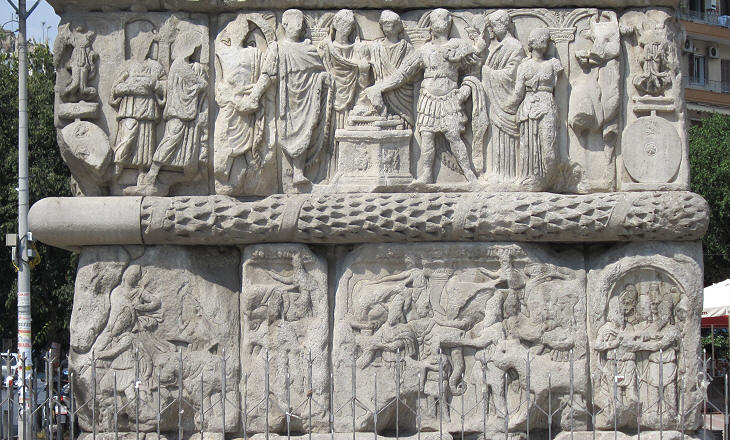 Arch of Galerius: (above) Diocletian (left) and Galerius (right) make a sacrifice; (below) scenes of fighting which show elephants and lions

In his role as Caesar Galerius had direct responsibility for most of the Balkan Peninsula, but between 296 and 299 he was involved in campaigns against the Sassanids who threatened the eastern provinces of the empire which were under Diocletian's jurisdiction.
After an initial defeat Galerius managed to invade Persia from Armenia and then descended from Amida (today's Diyarbakir) along the Tigris River into Mesopotamia and conquered Ctesiphon, the Sassanid capital near today's Baghdad (it was the fifth time the Romans conquered that city). 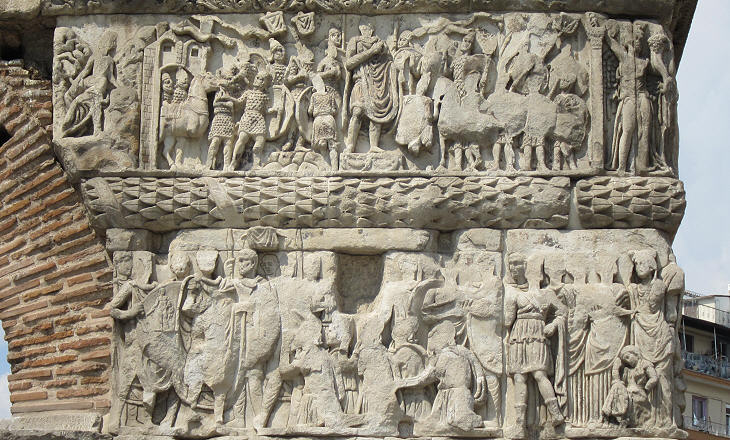 In 305 Diocletian retired and Galerius became Augustus (senior co-emperor) together with Constantius Chlorus, Constantine's father; in the following years Galerius repeatedly tried to become the sole emperor, but he eventually had to accept sharing the empire with Constantine and Licinius; the arch which celebrates his victories was probably built after Galerius became Augustus.
The iconography of the remaining marble panels was inspired by the reliefs of Trajan's Column (the scenes of the allocution and of the enemies' surrender) and of Ara Pacis Augustae (the scene of the sacrifice). In all reliefs the face of Galerius has been erased or badly damaged, probably by the Christians who charged him with having instigated Diocletian's persecution.
The image which appears in the background of this page shows a relief of the arch portraying Galerius on his horse, personally involved in a fight (in Trajan's Column the emperor was never portrayed while taking part in a fight). 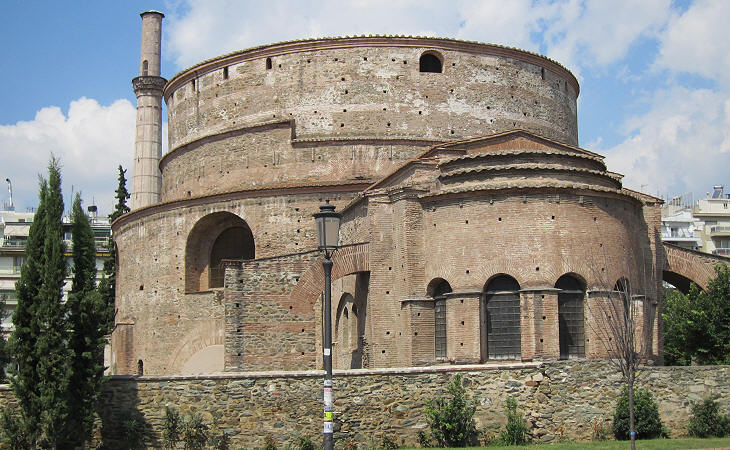 Galerius built the Rotunda 150 ft northeast of the arch in alignment with its pillars; the purpose of this large circular building is uncertain, although the prevailing opinion believes it should have been his mausoleum (similar to those of Augustus and of Hadrian in Rome); it was turned into a church by the addition of an apse on its eastern side and it was dedicated to St. George, a very popular saint in Macedonia, also because its iconography is reminiscent of the Macedonian/Thracian Horseman, a local deity. The Rotunda: (left) interior of the dome; (right) minaret

The presence of a circular opening in the dome, similar to that of the Pantheon in Rome is a feature which could indicate that the Rotunda was meant to be a temple; the construction technique of the dome is also similar to that of the Pantheon; the fact that it never collapsed is particularly remarkable considering that the region of Thessalonica is subject to major earthquakes (the last one occurred in 1978 and 50 people were killed).
The Ottomans turned the church into a mosque with the addition of an imposing minaret, the only one not to be pulled down after the Muslim population left the city. 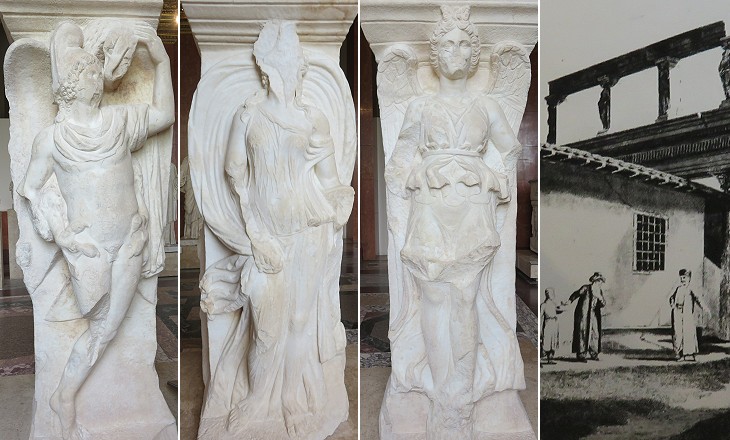 Louvre Museum in Paris: statues portraying Ganymede, a goddess and a victory which decorated a Roman building (IInd/IVth century AD) eventually called "La Incantada" (The Enchanted One) by the Jews who lived in that neighbourhood

In 330 Emperor Constantine inaugurated Nova Roma (Constantinopolis) and Thessalonica lost its role as capital of a part of the empire. 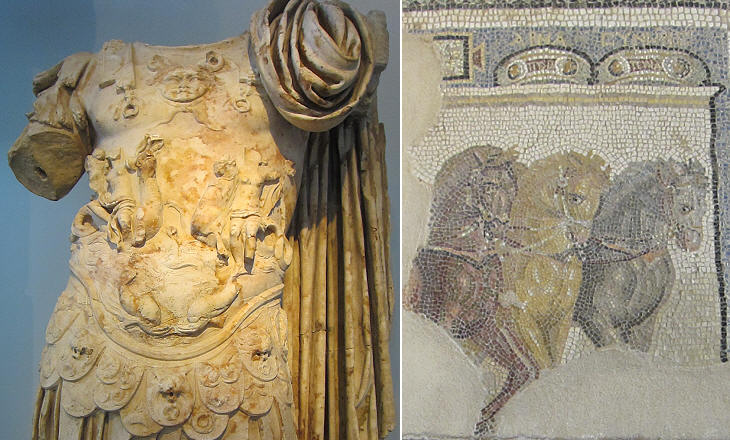 Archaeological Museum: (left) statue of a Roman emperor: (right) detail of a mosaic found in a villa in the environs of the city

Move to Byzantine Thessalonica or to Philippi or to Kavala or to Veria or to Kastoria.