Thugga (Dougga) - page two
(detail of the theatre at Thugga)

You may wish to see an introductory page to this section or page one first. The latter provides a historical introduction to Thugga and a description of the monuments located at its centre, most of which were built during the reigns of Emperors Hadrian, Antoninus Pius and Marcus Aurelius (117-180 AD). This page illustrates the development of the town to the north and the west during the Severian Dynasty (193-235). At Thugga, Thuburbo Majus and at other ancient towns in Tunisia archaeologists have identified large temples dedicated to Saturn which were located in a commanding, but rather remote position. The inhabitants of Thugga were not of Phoenician origin, but their contacts with Carthage led them to adopt Ba'al and his wife Tanit, the main Punic deities, as their own. After the Roman conquest Ba'al was renamed Saturnus and Tanit Juno Caelestis.
The Temple to Saturn was built in 195 AD on a previous shrine at the top of the hill above Thugga (archaeologists have found a large number of ex-votos referable to that shrine). The construction of the new temple required substantial terracing and in the dedicatory inscription, Lucius Octavius Victor Roscianus, the donor, said the temple cost him 150,000 sesterces. For the Romans Saturn was an Italian god-king who presided over a mythical golden age and Saturnalia were one of the main festivities of the Roman calendar (you may wish to see the Temple to Saturn in the Roman Forum). 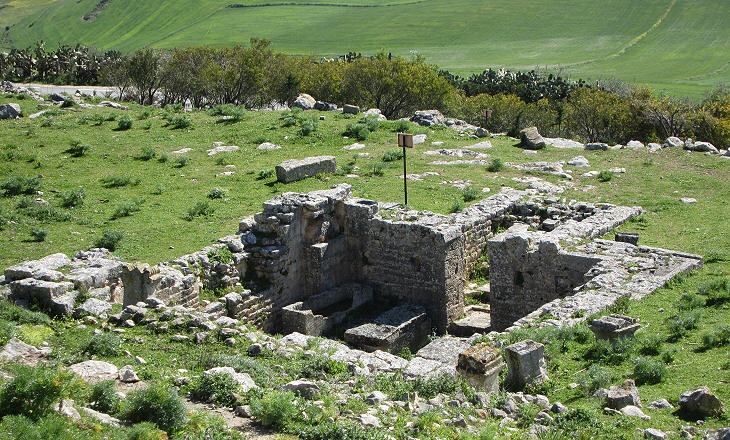 A terrace below the Temple to Saturn was outside the pomerium (legal boundary) of Thugga, thus the construction of funerary monuments there was allowed. Archaeologists have identified five necropolises in the olive groves which surround Thugga today; in general they do not retain major monuments with the exception of a large family tomb which was used for several centuries. At the beginning it contained urns with the ashes of the dead because cremation was the usual way of disposing of corpses. During the Late Empire sarcophagi were introduced, but at Thugga and in general in Tunisia they were not decorated with elaborate reliefs as in other parts of the Roman Empire. 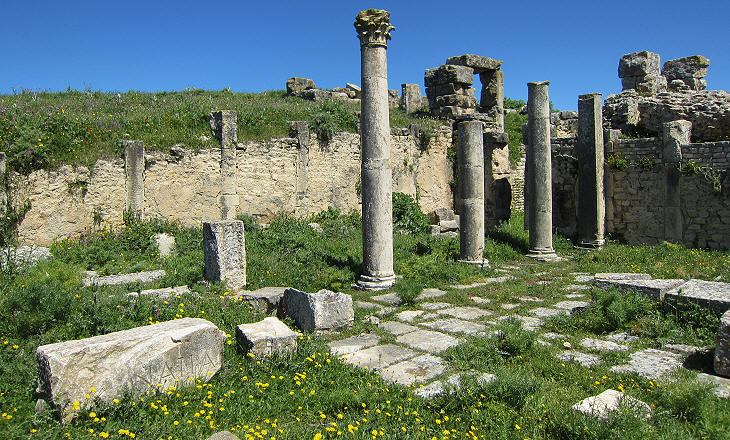 The top of the hill retains some ruins of pre-Roman walls and outside them large stones which marked the site of some Numidian tombs. In this location which is quite remote from the town a temple was built by Iulia Paula Laenatiana at the time of Emperor Antoninus Pius. She had the highly honorific title of Imperial flamen, i.e. she was in charge of ceremonies in honour of the emperors. The dedication to Minerva can be explained by the fact that the goddess was one of three deities honoured in the most important temple of Rome on the Capitol Hill. A few years later a temple (Capitolium) was dedicated to the three deities in the Forum of Thugga. 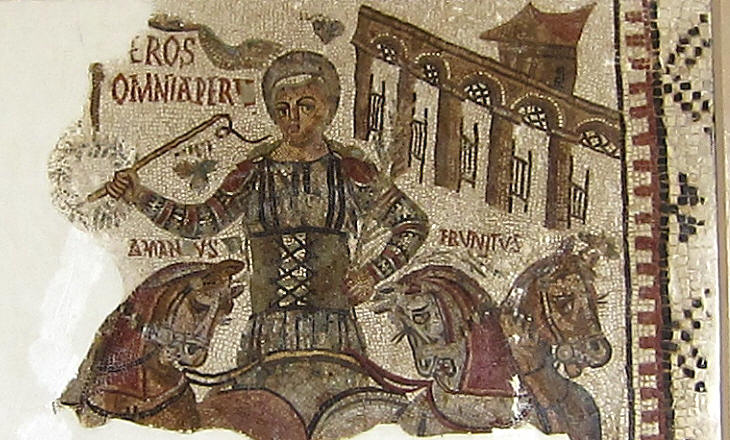 Museum of Bardo: mosaic portraying the chariot driver Eros and his horses

Archaeologists have identified the site of a circus near the Temple to Minerva which was built in 225 exploiting a natural depression of the ground. The dedicatory inscription says its construction was postulante universo populo requested by all the inhabitants of the town. A mosaic found at Thugga gives an idea of how popular chariot races were in the town. It portrays Eros, a chariot driver who has won a race (as he holds a palm branch) and who is acclaimed by his supporters (Omnia per te - we are all for you). Two of his horses have names (Amandus/Lovable and Frunitus/Jovial). In the background the mosaic depicts, the carceres, the cages from which the chariots started the race (you may wish to see those at Villa dei Sette Bassi near Rome). Archaeologists however do not think the mosaic depicts the actual circus of Thugga, because it was too small to have five chariots racing on the same line. Learn more about chariot races by visiting Circus Maximus in Rome and see a mosaic at Lyon which depicts a race with eight chariots and shows the carceres. 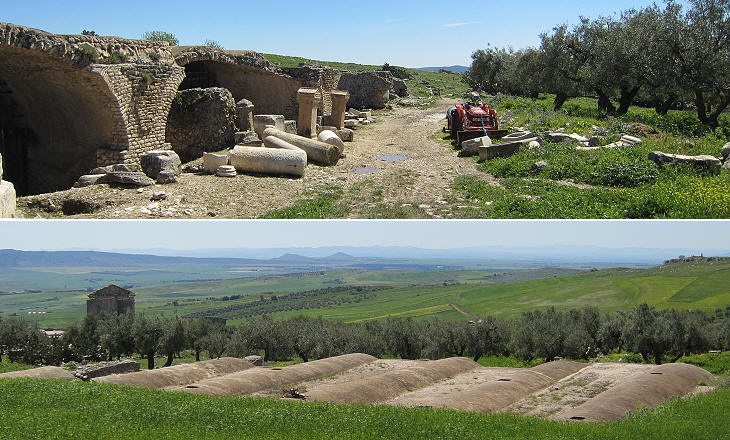 Cisterns near Temple to Minerva and Roman necropolis

The economy of ancient Thugga was based on farming and the same applies to Nouvelle Dougga, the village where those who lived among the ancient monuments were resettled in the 1960s. In order to provide Thugga and the surrounding fields with water the Romans captured it at some nearby springs and stored it in a series of long cisterns, which today are used as warehouses. 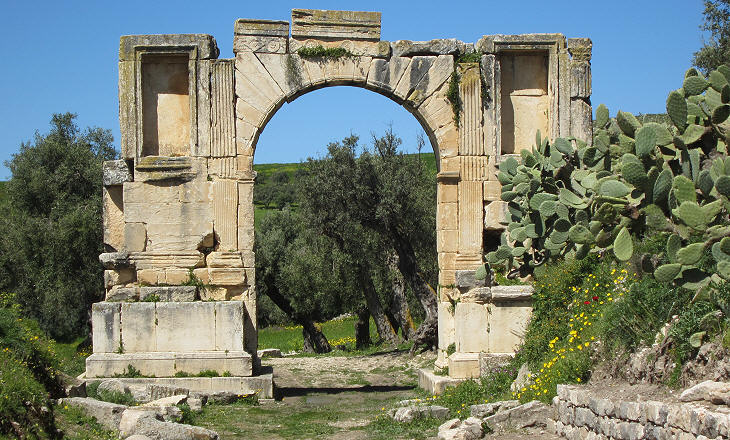 The Gabinii were a very wealthy family of Thugga. They often held the office of Imperial flamen (priest) and they promoted the construction of several monuments. During the reign of Emperor Alexander Severus they built a large shrine dedicated to Juno Caelestis to the west of the town which required the construction of a road. At the junction between this road and that which came from the valley to the south of Thugga they built a triumphal arch dedicated to the emperor. Another arch stood at the eastern entrance to the town. You may wish to see other triumphal arches in Africa: at Mactaris, Musti, Pheradi Majus and Sufetula in Tunisia, at Cuicul and Thamugadi in Algeria, at Volubilis in Morocco and at Oea (Tripoli) and Leptis Magna in Libya. Other cisterns can be seen immediately outside the arch. They were the terminal point of an eight mile long aqueduct built at the time of Emperor Commodus, most likely to supply the Southern Baths. 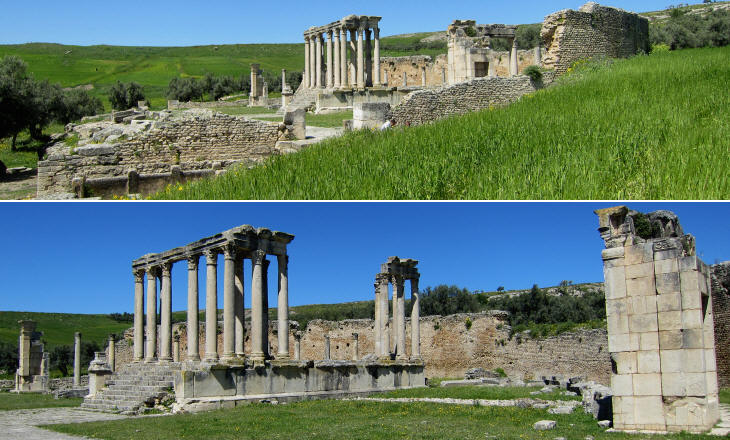 Temple to Caelestis: views of the "temenos" (holy enclosure)

The Temple to Caelestis was built in a large crescent shaped temenos which housed a holy grove. The shape of the enclosure is thought to be a reference to Tanit, the Punic goddess whose symbol was a crescent (you may wish to see it on a stela at Kerkouane, a Punic town). Today the temple has a commanding view over the valley, but it is more likely that the enclosure included a long wall opposite the temple, in order to completely hide ceremonies from the eyes of those who could not attend them. 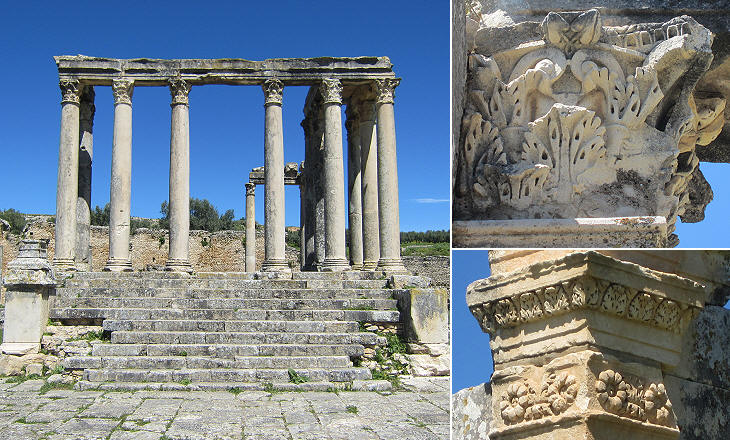 (left) Temple to Caelestis; (right) details of the decoration of ancillary buildings

The temple was built on a very high podium (frequently seen in Roman temples). The space between the two central columns is wider than the others, something which rarely occurred in temples consistent with Greek standards. Ceremonies took place in the cella, but more often they consisted of processions along the portico which surrounded the temple.
The decoration of the temple was particularly elaborate; while the capitals of the main temple do not depart from tradition, those of ancillary buildings were decorated with rosettes (which appear also in the Arch of Alexander Severus) or with an unusual type of Corinthian capital. 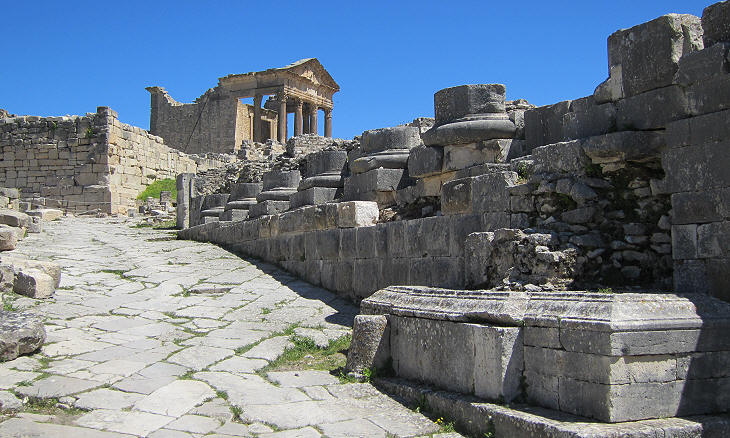 Temple to Caracalla's Victories: walls of the cella decorated with columns along the road linking the Forum to the Southern Baths

Gabinia Hermona built a temple celebrating Emperor Caracalla's victories. As a matter of fact Caracalla had the titles of Britannicus, Germanicus and Parthicus because he accompanied his father Septimius Severus on campaigns in Britain, Germany and Mesopotamia. When he undertook a campaign against the Parthians on his own, results were inconclusive and he was murdered by his own guards at Carrhae. The finest mosaics found at Thugga during the early excavations were moved to the Museum of Bardo in Tunis. Those having a purely decorative purpose without representation of human beings or animals were left in situ where they gradually disappeared.
The mosaics found in more recent periods were left in place, but owing to the lack of appropriate shelters, they are at risk of disappearing too. 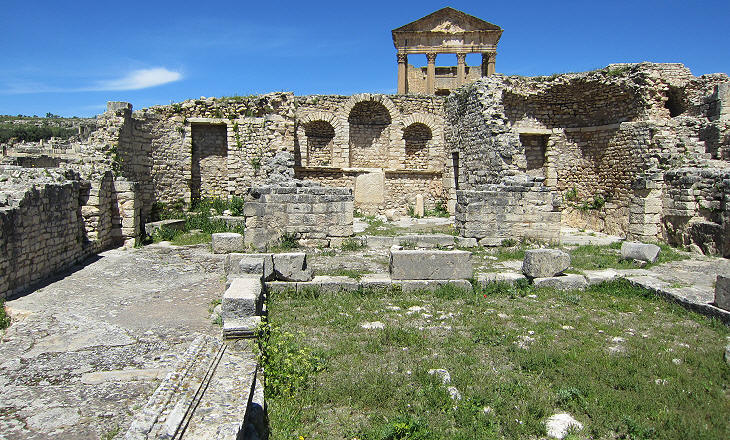 The temple to Tellus is one of the last additions to the monuments of Thugga. It was built in 261 at the time of Emperor Gallienus. His reign was marked by great difficulties, but apparently these did not impact on Thugga because a house with very elaborate mosaics was built in that period. Tellus (Earth) was a Roman goddess protecting agriculture; this temple is one of the few dedicated to her in the Provinces. She is portrayed in a famous relief of Ara Pacis Augustae in Rome. 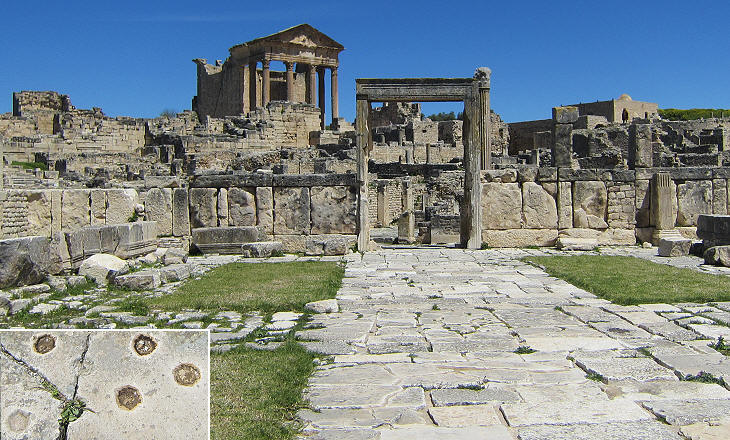 Dar Lacheb, perhaps a temple or a gymnasium and to the far right the mosque of the Arab village; (inset) a stone with small cavities for a betting game inside Dar Lacheb, similar to those at the Rose Wind Square

A large rectangular portico which had at its centre a lost building is still named after the house of an Arab inhabitant of the town. It was built at the same time as the Capitolium. The standing portal is popular with visitors because it allows framed views of that temple. 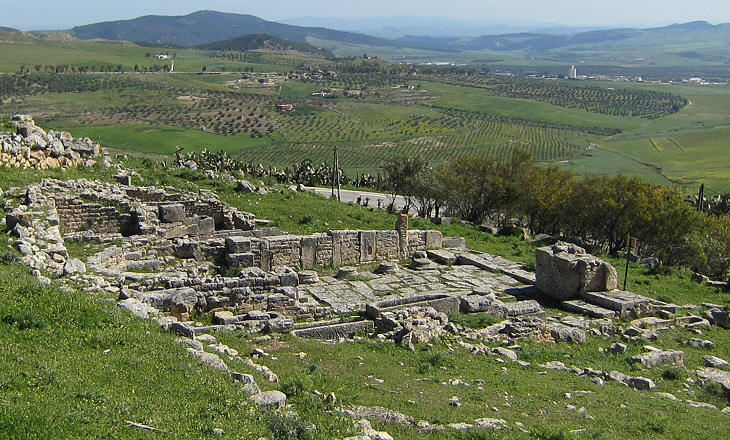 St. Victoria's and the road leading to Teboursouk and Thignica in the Mejerda River valley

Unlike many other Roman towns of the region, Thugga has very few Christian monuments. Archaeologists found evidence that at some point the Temple to Caracalla was turned into a church, but the only meaningful memory of Christian Thugga is a small necropolis near the Temple to Saturn. It housed a church in part excavated into the hill, with several underground tombs and built with materials taken from the nearby temple. It is dated early Vth century before the 439 invasion of Africa by the Vandals. 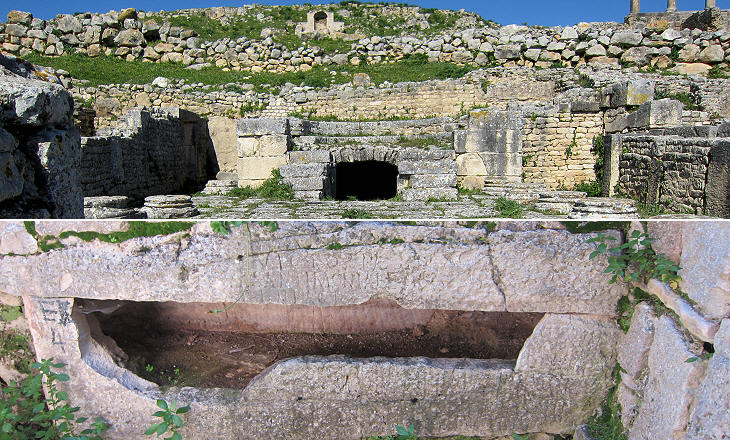 (above) Apse and entrance to the crypt of the church; (below) sarcophagus with the inscription "Victoria santimoniali in pace"

The church is named after an inscription on a sarcophagus: santimoniali means that Victoria devoted herself to God, so she was a sort of nun. It does not say how many years she lived, which is rather strange because even the shortest Roman funerary inscriptions had this piece of information. The inscription was carved in a very rough way. 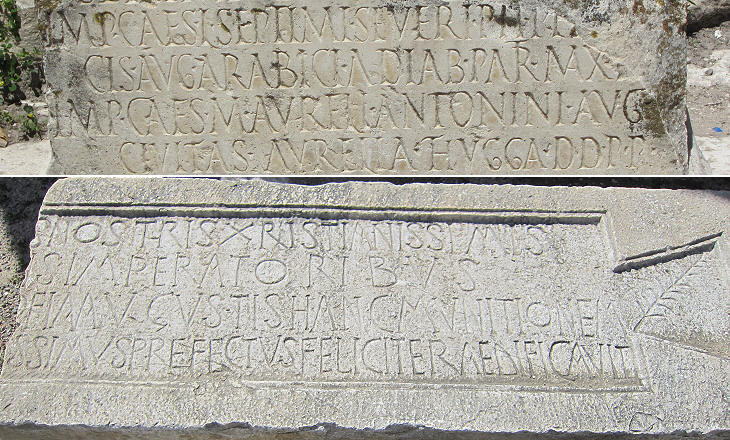 Photos showing the decline in the quality of inscriptions: (above) making reference to "Civitas Aurelia Thugga" at the time of Emperor Caracalla; (below) celebrating the construction of fortifications at the time of Byzantine Emperor Justin II (565-78) at Teboursouk, four miles from Thugga